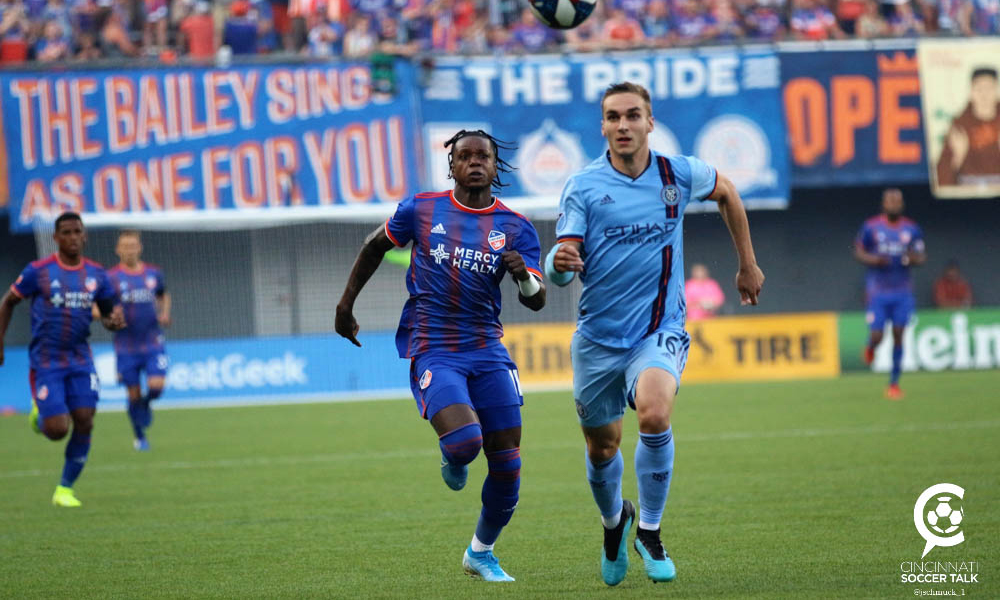 FC Cincinnati took the pitch on a cloudy night at Nippert Stadium. Saturday night marked head coach Ron Jans’ first home match for the Orange and Blue. Last week in Columbus, Jans got a taste of the Orange and Blue faithful, but last night was the first time Jans experienced the full Nippert effect.

In front of a crowd of over 27,000, Jans led FC Cincinnati to a 4-1 loss against New York City FC. This was not a stark contrast from the last encounter between the two clubs, where FCC fell 5-2 in Yankee Stadium. The Orange and Blue at least scored their own goal this time around.

The starting lineup remained the same from the match in Columbus. Przemysław Tytoń returned to goal in Spencer Richey’s absence.  Tytoń proved his worth against Columbus Crew, where he came up with two huge saves at the end of the match, securing a 2-2 draw. Tytoń, however, struggled to keep that reputation last night, giving up four goals.

New York started the match strong, showcasing why it is in third place in the conference. New York is known for its speed and attacking power, and it gave FCC a run for its money. The two clubs started off chippy and would stay that way for the remainder of the match.

FC Cincinnati struggled, and it seemed that keeping up with NYCFC’s fast pace would be one of the biggest challenges. The Orange and Blue kept up quite well in the first half. After a tough foul in the box, FCC was awarded a penalty kick. Emmanuel Ledesma stepped up, but NYCFC’s keeper, Sean Johnson, saved the shot, keeping the scoreboard blank.

The match remained a battle, with Allan Cruz receiving a yellow card in the 26th minute, but Cruz responded in the best way – burying a shot on goal with an assist from newcomer Andrew Gutman in the 29th minute. As the fans were cheering and before the smoke cleared, NYCFC leveled the playing field. Valentín Castellanos equalized off of an assist from Maximiliano Moralez, and put NYCFC on the scoreboard.

FCC kept its heads in the match and kept on fighting. The momentum didn’t slow down after the opponent scored, which is an improvement from what has happened earlier in the season.

In the 35th minute, NYCFC received a penalty kick after a handball was called on Andrew Gutman. Tytoń was ready for the challenge and blocked the kick just like Johnson had blocked Ledesma’s earlier in the match. The score remained at 1-1, and FCC kept fighting. But in extra time, Héber put NYCFC ahead with a 2-1 lead right before the whistle.

The Orange and Blue would have to work harder in the second half just to equalize and even harder to put themselves ahead. Against an offense like NYCFC, that would prove to be a struggle.

But FCC was not going to give up. Roland Lamah and Ledesma were ready, taking shots whenever they had the ball. They weren’t clean and they were easily blocked, but the drive and motivation was there. The results, however, were not. Runs down the pitch are great and all, but only if there is an available player to finish the run.

In the 65th minute, FCC had another shot to equalize. FCC received a free-kick, and Victor Ulloa stepped up to take it. The ball was aimed for Mathieu Deplagne, but he couldn’t connect, and he went down by the net. Minutes later, NYCFC succeeded where FCC has failed most of the season, scoring off of a corner kick. The score was 3-1 in the 71st minute with another shot by Castellanos.

The Orange and Blue let their frustration show with a flurry of fruitless kicks into the box. The desperate shots did nothing to put FCC ahead. NYCFC rubbed salt in the wound in the 89th minute with another goal, a brace from Héber, ending the match at 4-1.

It’s difficult to look at the end result and not feel apathetic, especially after how this season has gone. Regardless, the club has shown improvement under Jans. While the scoreline doesn’t reflect it, the backline has improved all around.

The club needs to work on maintaining momentum and pushing the front line more. The opportunities are there — chances are being created — but FCC has been falling on finishing these opportunities the entire season.

Finishing these chances will be crucial if it wants to get a win during Rivalry Week. The Orange and Blue are set to face off against northern rivals, Columbus Crew SC again on Aug 25.