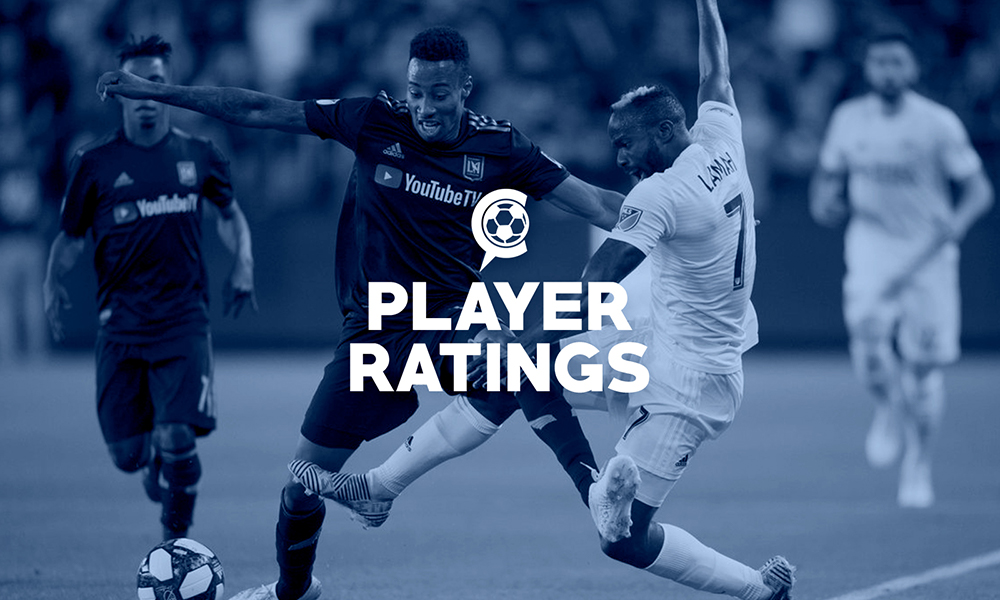 FC Cincinnati converted two of its three chances and held on for the draw on Saturday’s Hell is Real Derby. Here are our player ratings for the match.

FC Cincinnati came out ready to play in Saturday’s Hell is Real Derby, putting up two goals early. The match then settled in, and Cincy found itself defending in the latter stages of the match. Overall, FCC converted two of its three chances and held on for the draw. Goals came from Darren Mattock (16th minute) and Emmanuel Ledesma (23rd minute). Columbus leveled the match thanks to a penalty kick from Gyasi Zardes (45th minute) and a Pedro Santos rocket (62nd minute). Here are our player ratings for the match.

Now on to the ratings: Note – Brad is out on vacation, so the ratings may slightly deviate from his normal high standards

Tyton saved four shots inside the box and is up for player of the week. Once again, it is hard to lay the blame of the match on the goalkeeper, and it is very unfair to do so here. Tyton had no control on the PK call and could not have been expected to save it. He failed to anticipate a Santos rocket, but again, he isn’t to blame for that sequence as well. Tyton did, however, keep FC Cincinnati alive when the defense started to break down around him late in the match. He is up for Player of the Week and deserves your vote. I would say this match was his best performance of the year.

Coach Ron Jans wasted no time throwing his newest left back into the fire. Gutman’s arrival was needed months ago when Greg Garza went down. Even though it was his first match, he played pretty well all things considered. Gutman got involved in the attack, even landing 12 successful passes in the final third. Late in the match, there were some defensive errors, but at the end of the day, the left side held up pretty well.

Heading into the match, I expected a newly formed backline to struggle. I did not expect it to come at the hands of the center  back positions. It was not a good night for the center pairing, and Kendall Waston had passing issues outside his own half. His long passes were routinely picked off, and when FC Cincy had possession he was not great at distributing from up top. The goal from Pedro Santos is not his fault, as the play had broken down and he was covering left. Big credit to Waston however for possibly saving the match. Crew fans have been giving Zardes grief for missing an open net late in the match but it looks like Waston may have actually arrived in time to save that ball. Watching that play in slo-mo it is still hard to say for sure, but if Waston touched it, the draw is his.

Van der Werff was FCC’s weakness vs the Crew, and two points were sacrificed here. His most glaring error was the penalty call in the 45th minute. Yes, it was soft, but he was also beat and put himself in a bad position to start with. It isn’t easy to point at one player and blame a goal on them, but van der  Werff put the Crew back in the match. If that wasn’t bad enough, he was also covering Santos on the second goal and froze,  unsure who to take with two players freeing up. Brad Gough explains this more in his article.

Deplagne finally moved back to his natural position with Gutman’s FCC arrival. He understandably struggled after spending most of the season on the other side of the pitch. We are not worried about Deplagne long-term, as he likely will adjust quickly. The bad vs Columbus, his eight unsuccessful passes in Crew territory, the three dropped on his own side and the eight kicked out of play for recovery. He was able to navigate the ball through his own half better than we have seen in a while.

Ulloa was a mixed bag vs the Crew. An assist can cover up mistakes, and they do so here. Ulloa still has work to do passing in the attacking half. He landed 16 but missed on another 11. The Cincy midfield still gets clogged up at times, but when Ulloa can create some separation he thrives.

Stanko was the cog to the FC Cincinnati midfield when it was flowing through into Crew territory. He was crisp, clean and made really good decisions distributing the ball. Some of that was due to a lack of aggression, but at the same time he didn’t turn the ball over much, which was a nice change of pace for an FC Cincinnati match. The one blemish on his night was the Santos goal, and his switch off didn’t help the backline with its decision making. Overall, Stanko had a good night in the midfield.

MLS dinged Cruz hard for his fouls, but he only ended up with a yellow and that is not surprising for his aggressive style of play. Cruz has been the offensive factor in the past several matches, so it was surprising to see him go dark against the Crew. He still got in the mix and got 10 balls into the final third, but nothing much came from them. Cruz did have a silent contribution on the night, and it was his run that helped free up Ledemsa for an FCC goal.

Starting with the good, Lamah was the key linchpin on the Ledesma goal. If he doesn’t make a killer pass, then the whole sequence never happens. Sadly, that is about the end of the notable moments we noticed. His passing was nothing to write about. Lamah was average and was subbed out in the 63rd minute.

Ledesma calmed down after the wild shooting match he had vs Vancouver. Ledesma was looking more strategic and had better decision making in this match vs the Crew. His goal was perfectly placed, and he made it look effortless. On the flip side, Ledesma only had one other shot on goal, and it was from outside the box. Finding Ledesma in space almost always equals an attempted shot on frame. If Jans can find a way to create more Ledesma chances, he will add to his goal count.

The goal on a set-piece was a great play, and Mattocks took full advantage when the Crew failed to mark him. How on earth was that his only shot of the match? No seriously, Mattock did not have a single shot on or off frame the rest of the match. FC Cincinnati addressed some problems in the window, but the starting striker role is still the young club’s glaring weakness.

FC Cincinnati had three shots on target (two of those were goals) and four off-target in the entire match. Gyau had one of each, and he entered in the 63rd minute. He made the best of this time and was the only player producing in the final stretch of the match. Looking forward to Gyau starting the match soon.

We would love to see what Etienne would add to a match with more time. Not a ton of service for him in the second half vs the Crew,  but he played aggressively and just arrived at the club. Due to the lack of attacking options up front, Etienne should have time to prove himself.

Entered the match with nine minutes left plus extra time. Columbus held the ball for a good chunk of that time. No shots, no impact, pointless