Our Talking Tactics topic this week is how the lack of midfield creativity hurt FC Cincinnati in its 2-1 loss to Vancouver on Saturday.

Losing 2-1 at home to the bottom dwellers in the West, in a game that saw FC Cincinnati score in the early stages, was not a good way to end Yoann Damet’s time as interim head coach. The Whitecaps came in with a simple, yet cohesive game plan: Pack the middle and force FCC to beat them on the wings. And it worked. FCC had a lot of possession, a lot of passes and a lot of shots but trailed Vancouver in shots on goal and goals scored.

Vancouver made a concerted effort to force FC Cincinnati to play on the outside. It set up to defend in its own half of the field, often letting Kendall Waston and Maikel van der Werff have time on the ball. 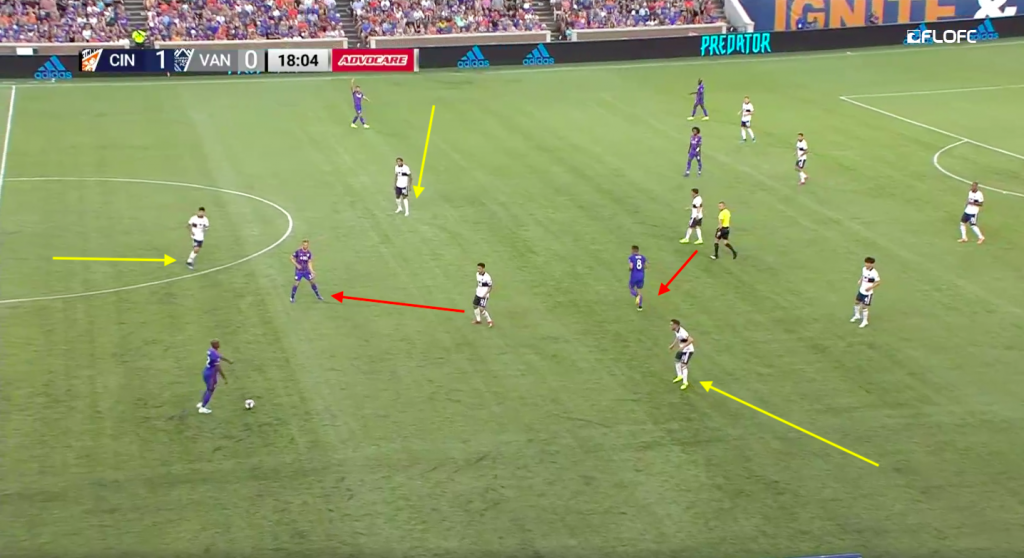 The image above shows how Vancouver consistently pinched its wingers in and dropped its forward back, creating congestion. They dared FCC’s outside players to attempt to fit passes into Caleb Stanko and Victor Ulloa, then pounced quickly, trusting the midfielders would panic and play a negative or square pass or even turn the ball over. And FC Cincinnati’s midfielders obliged much too often.

Stanko, in particular, struggled early in the game to play in and out of pressure. Vancouver continued to let the midfielder have space, trusting he would be unable to punish them. 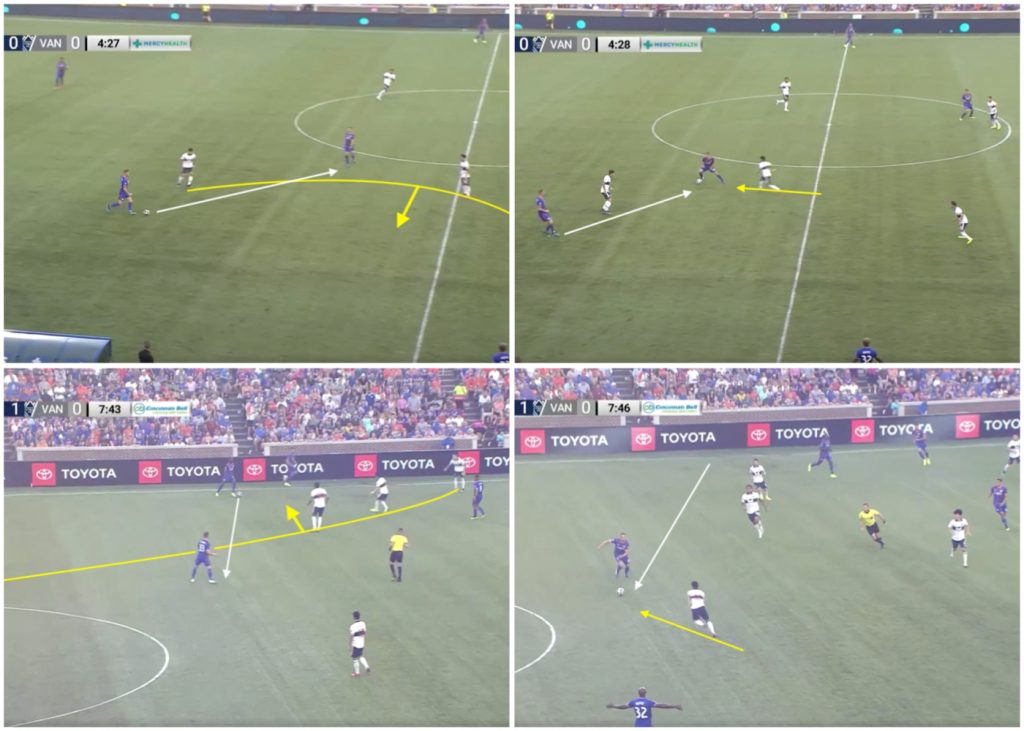 Stanko had many opportunities to dissect the Vancouver defense but elected too often to play the ball square or backward. Of the midfielder’s 36 completed passes, only 16 were forward, and only five of those were to players in the center of the pitch. This inability to complete forward passes in the center of the field led to FCC attempting 20 crosses during the match, more than seven above its typical average.

A look at the FC Cincinnati heat map shows Vancouver was able to maintain its shape and force the Orange and Blue to the flanks. 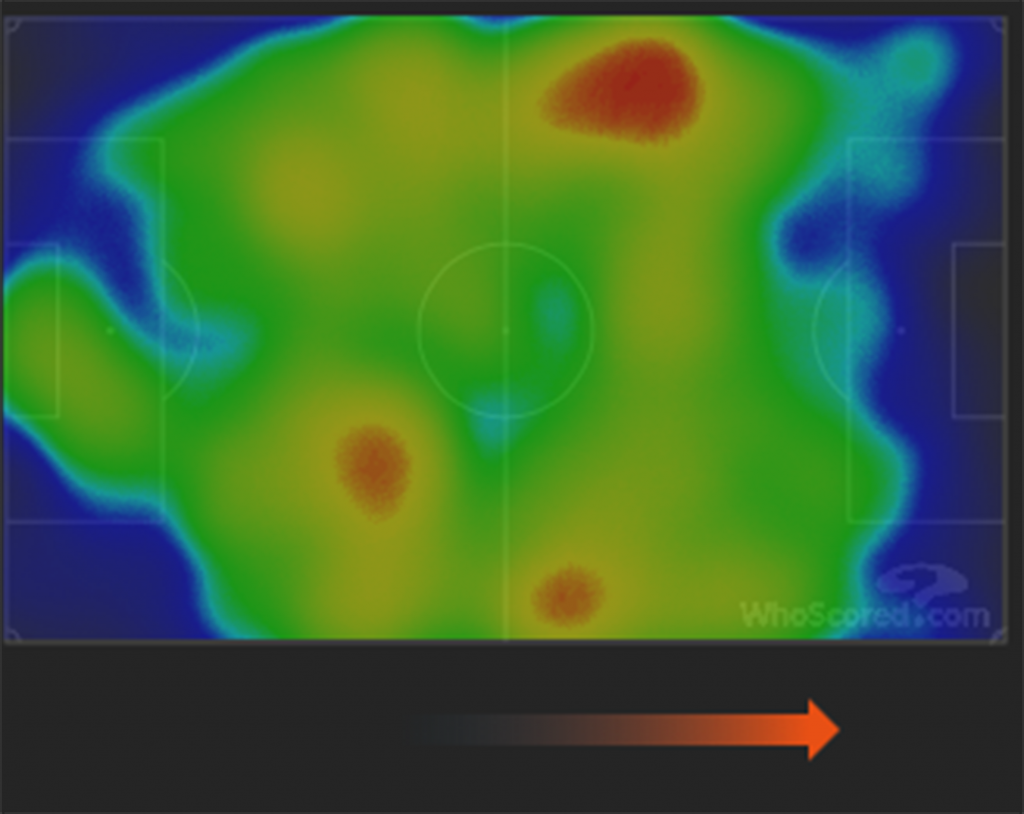 This inability to control the ball in the center of the park led to just 26% of the team’s attack coming centrally. Thus, FCC settled for 20 crosses, nearly seven more than their per game average.

No Spearhead in Attack

Added to the inability of the midfield to play the ball forward was the lack of a focal point to the FCC attack. Allan Cruz, playing in the number 10 role, had the fewest touches of any outfield starter at 34. Forward Darren Mattocks had plenty of touches but floated too often to the wings to get on the ball. 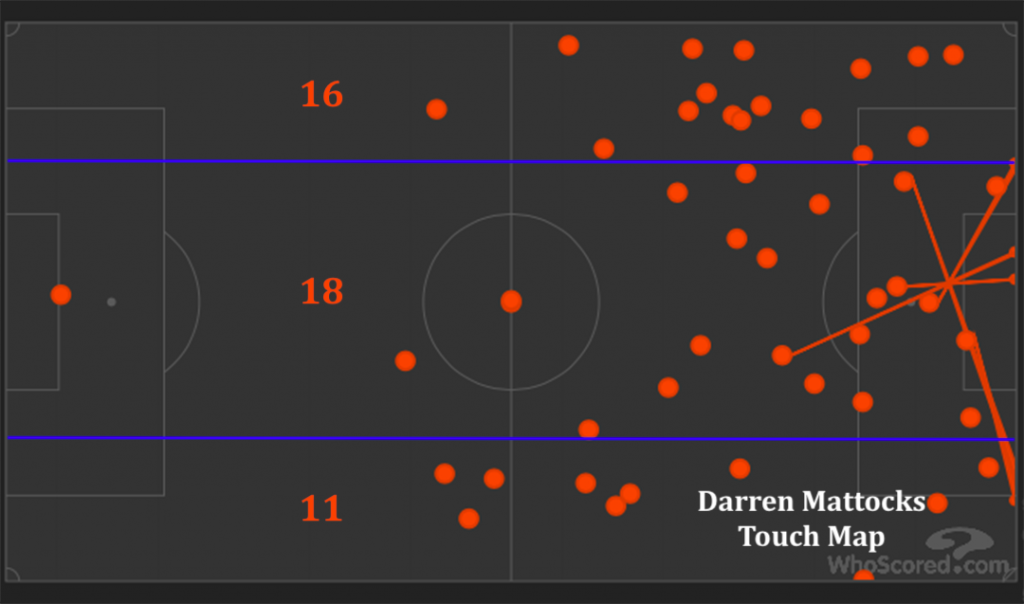 With Mattocks floating wide to get on the ball, FCC created overloads but were unable to exploit them. Too often they would switch the fields, but the player receiving the ball on the opposite flank would have too few options. In the instance below, Mattocks moved left and combined to free up Ulloa, who was able to find Justin Hoyte on the opposite flank. However, with few options, Hoyte exchanged passes with Emmanuel Ledesma, allowing the Vancouver defense to recover its shape and once again go about the task of limiting FCC’s central penetration. 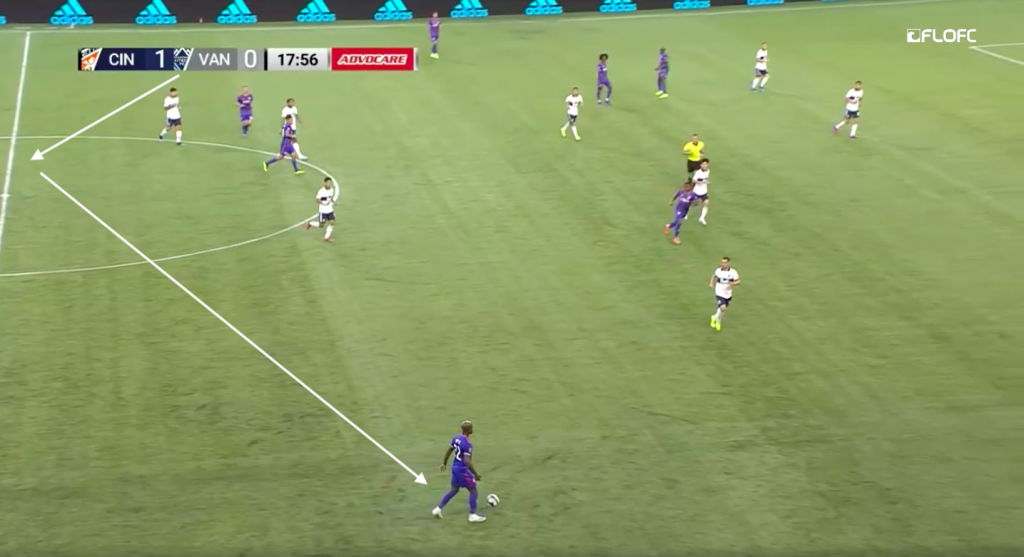 Switching play is generally a very good tactic, but in order to exploit the space that the team gains with a switch of play, someone needs to take the onus of providing a central focal point. In the chance above, Hoyte could have dribbled centrally, drawing the Vancouver defender toward him, then slotted the ball to Cruz, making a central run.

This lack of a focal point for the FCC attack snowballed, and even when the team had Cruz or Mattocks in good space between the lines, they were unable to find the pair. Justin Hoyte and Mathieu Deplagne were presented with very few options other than to play the ball square or negative. 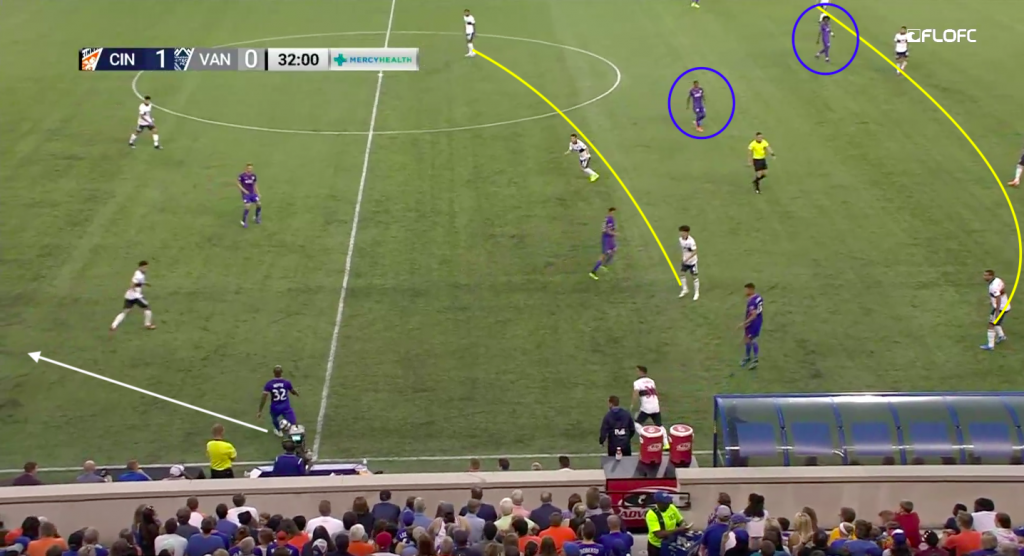 Vancouver had a clear game plan coming into the match against FC Cincinnati and executed it well. FCC fell into the trap of playing the simple, open passes around the perimeter that the Whitecaps were giving it. Maybe it was a lack of drive or preparation, or maybe it was a lack of personnel. Stanko, playing in the No. 6 role, is a stabilizing force defensively. However, against Vancouver, he lacked the technical nous to open up space in the center of the pitch with his movement or passing. Mattocks, for all his work rate and touches, was unable to provide a target up top for the Orange and Blue to play the ball off of. Finally, Allan Cruz, so often FCC’s best player, scored the early goal, but even he was miscast in the No. 10 role and was unable to make a real impact on the game after his unexpected opener.

Ron Jans comes in this week to take over for Damet. On the back of two narrow losses, the Dutchman has something to work with, but he’ll have to get the right players in the right positions if he is to find some potency in the FCC attack.