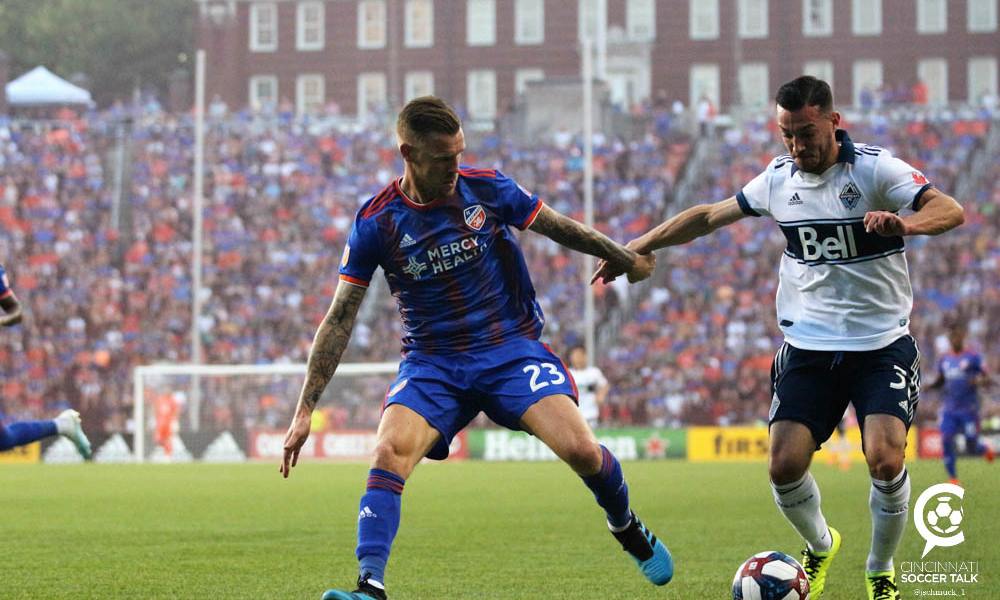 FC Cincinnati scored in the sixth minute but conceded twice Saturday in a 2-1 loss to Vancouver Whitecaps FC at Nippert Stadium.

Before FC Cincinnati’s match Saturday at Nippert Stadium, general manager Gerard Nijkamp was asked about acquiring a striker in the transfer window, which closes on Thursday. Nijkamp said the club is looking for a striker, but the player must be available for purchase. With each passing day, it looks a little more like the Orange and Blue will have to make due with the attackers they have for the rest of their inaugural MLS season.

That’s likely not what most FC Cincinnati fans want to hear after Saturday’s 2-1 loss to Vancouver Whitecaps FC, sending its losing skid to four matches. After scoring in the sixth minute, the club sat on its laurels a bit and conceded twice. There were plenty of chances, but the finishing was lacking.

“Unfortunately we couldn’t capitalize on that,” interim coach Yoann Damet said. “The score speaks for itself. We should have been more efficient in the final third.

“We need to work, we need to come back to training and keep working on that. As everybody knows, in the final third, there is not much space and time. It’s very difficult to create opportunities. That’s a positive, we’ve been creating quite a lot. Now we need to be more efficient. We need to take our chances — maybe finish quicker. We tend to take a touch in the box when sometimes we should finish in one touch. There are a couple of little details we need to work on.”

The Orange and Blue came out swinging to start the match. Justin Hoyte nearly scored from long range in the second minute and had another blocked. Then in the sixth minute, Allan Cruz collected a missed cross and punched it in from 6 yards out for a 1-0 lead.

Vancouver had little offense to speak of until Hwan In-Beom slammed a 25-yard rebound off a free kick past Przemyslaw Tyton in the 41st minute to level the match at 1-1.

The story of the second half was the missed opportunities.

Whitecaps goalkeeper Maxime Crepeau made a brilliant save on a shot from Cruz. Then Roland Lamah made a cross to Darren Mattocks that had Crepeau diving, but Mattocks wasn’t ready for the pass. And later Mattocks switched his feet, but his shot from near the penalty spot went soaring into the Bailey.

All the missed chances caught up with FC Cincinnati in the 84th minute. Vancouver’s Russell Teibert crossed between Tyton’s legs to Felipe inside the 6-yard box. Felipe passed into an empty net to give the Whitecaps a 2-1 lead.

“We pushed and pushed and just couldn’t find that goal that we needed unfortunately,” Hoyte said. “We gave away the second goal. That’s hard to take. We’re disappointed. … Being 1-0 up we should see the game out or score another one. We should win these games.”

To make matters worse, Leonardo Bertone picked up a yellow card in second-half stoppage time and will be suspended on accumulation for the Hell is Real Derby on Saturday in Columbus.

FC Cincinnati shot 20 times, with just three on target. Twelve of those shots came from outside the box. Vancouver had 10 shots, five on target.