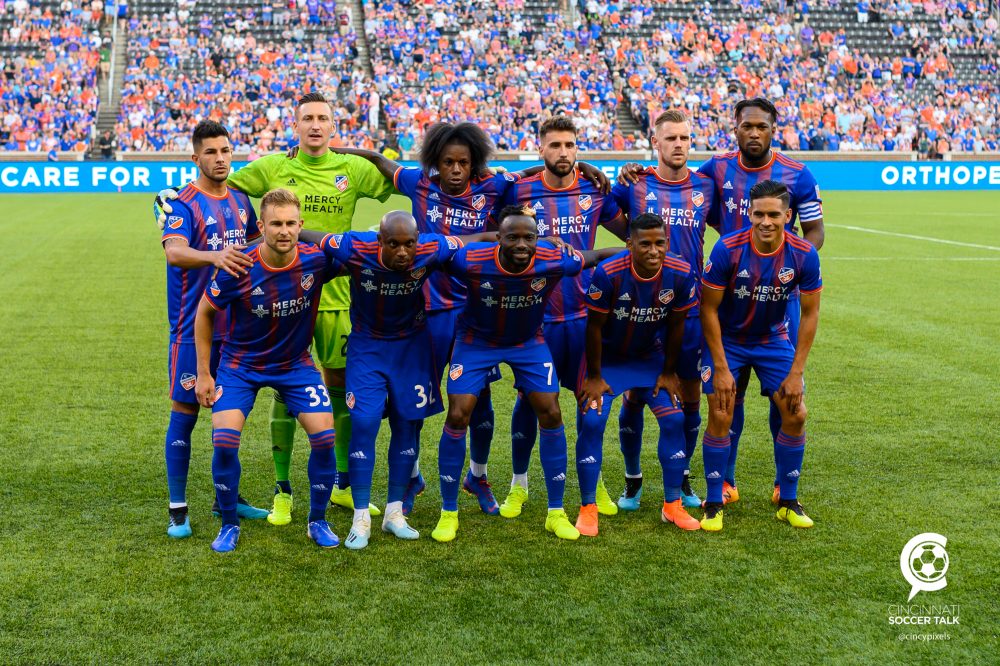 FC Cincinnati started off strong but it wasn’t enough as the Vancouver Whitecaps won 2-1 on Saturday. HerHere are our player ratings for the match.

FC Cincinnati started off strong, but it wasn’t enough as the Vancouver Whitecaps won 2-1 on Saturday. Allan Cruz put the home side up with a sixth minute goal, a team-high fourth, off a corner kick. In-Beom Hwang squared the match in the 41st minute with a shot from distance through traffic that beat Przemyslaw Tyton. Felipe clinched three points for the Whitecaps with his 84th minute effort.

Tyton had a couple of solid moments but should’ve done better on both goals conceded. Hwang hit a shot from distance for the first goal that Tyton was late to react too. The keeper might have lost the ball in traffic and was unable to stop the ball near post. On Felipe’s goal, Tyton got megged, giving the midfielder the ball on the goal line for an easy tap in.

The defender had a solid night starting with a nice cross to put Cruz in on goal in the sixth minute. He almost chipped Maxime Crepeau in the 58th minute, but the ball pinged just off the bar. I like how Deplagne was able to get up the field, and the majority of FC Cincinnati’s chances came with him involved.

The captain had another positive match for the club. Some might place blame on him for the second goal. I disagree. The midfield was like swiss cheese, leaving him alone against multiple attackers. Waston won eight aerial duels along with a pair of clearances on the defensive side of the ball.

The new centerback was solid on the back line and completed an astounding 62 passes. He did a nice job stepping up into the midfield to absorb pressure and help kickstart the attack.

The vet nearly got Nippert to erupt in the opening minutes when his shot barely flew over the crossbar. He was strong on the right and helped pinch in when Deplagne went forward.

Vancouver did a nice job packing things in on the defensive side and that made things tough for Ulloa and FC Cincinnati. The midfielder put in a solid shift but was unable to break Vancouver down with his passing. Most of his efforts were side to side to move the ball upfield rather than decisive passes to break open the defense.

Stanko was calm in the middle but could use improvement to break defensive lines with his passing as well. Vancouver was content to stay compact on the road, and when they did get forward Stanko was solid shutting down the attack.

You have to credit him for getting in dangerous places and staying aware to knock in a loose ball off the Deplagne cross. More to it is his movement. He made several off the ball movements to get into space. He almost had a second in the 46th minute, but Crepeau tipped it just over the bar.

Lamah had a couple of nice exchanges with Deplagne, but outside of that, he was invisible for most of the night. At $806,000, FC Cincinnati simply isn’t getting the production that warrants his spot on the field.

Several dangerous shots from distance. You have to give him credit that he’s at least going for it. Too many of his teammates are conservative and then give the ball away late.

I like his hustle, I like his movement off the ball to create turnovers, but the guy has to put his chances on goal.

I like how he sprayed the ball over the field. His pass to Kekutah Manneh in the 76th minute set up a Mattocks shot that should’ve put the home side up. He was a passenger on the second goal as Fredy Montero went flying right past him to set up the goal.

The rookie had a quiet night off the bench. He completed 11 of 12 passes but only one into the box.

He took Bertone’s long ball down nicely and created the chance that found Mattocks open 10 yards out.