Brad Gough breaks down the goals scored in FC Cincinnati’s 2-1 loss to Vancouver on Saturday in How They Happened.

FC Cincinnati once again came up short in a 2-1 loss at home to the Vancouver Whitecaps on Saturday. After taking a very early lead, the Orange and Blue gave up a goal at the end of each half. Here’s a look at how all of the goals happened.

FCC opened the scoring in just the sixth minute after controlling the match to that point. The move began with an excellent piece of penetration by Justin Hoyte and Victor Ulloa. 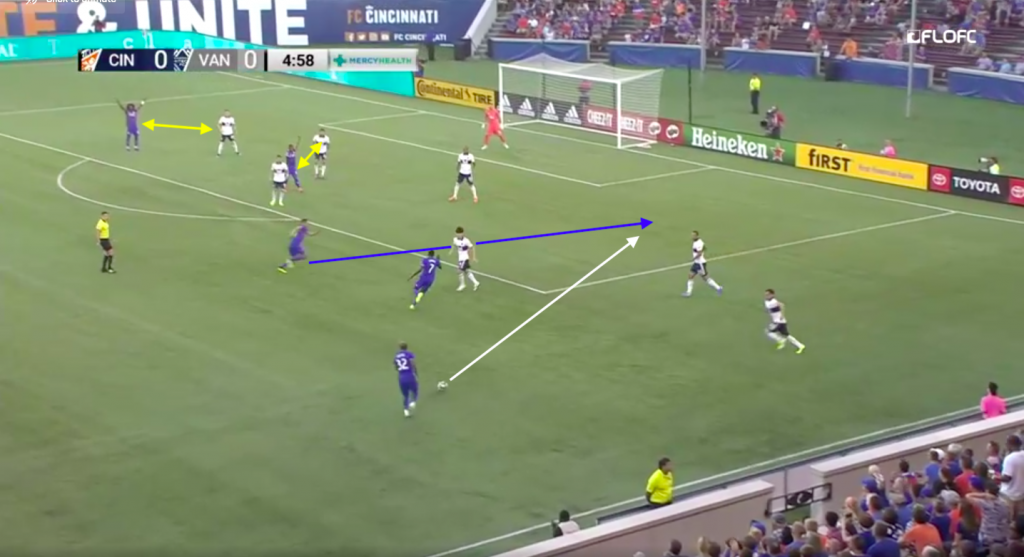 Ulloa’s clever run and Hoyte’s well-weighted pass had the effect of turning the Vancouver defense toward its own goal. While right back Jakob Nerwinski was marking Darren Mattocks, and center back Erik Godoy was responsible for Allan Cruz (yellow arrows), turning the defense inward sows the seeds of confusion needed to get free of those marks. 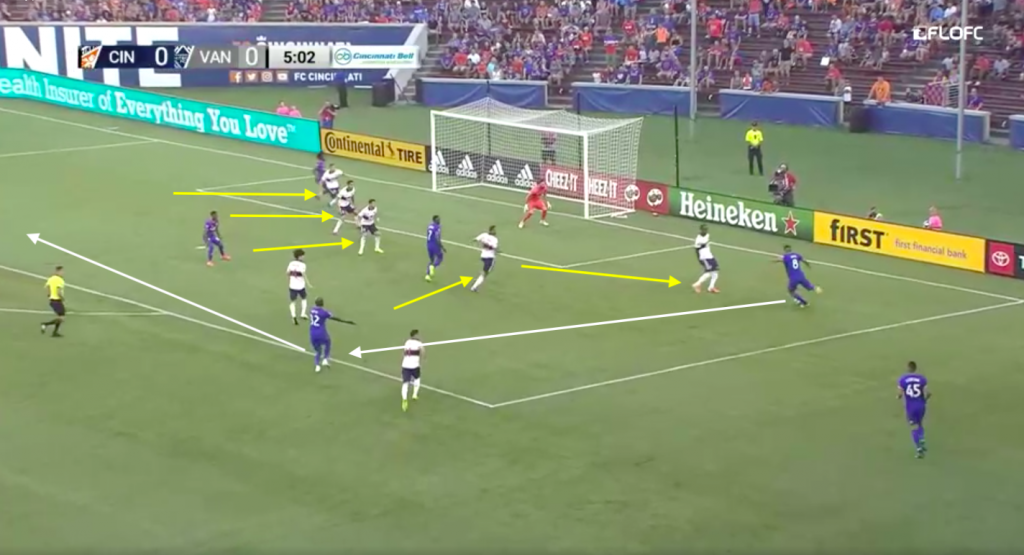 Ulloa pulled the ball back to Hoyte, who was only able to scuff a shot that skidded to the left flank, where Mathieu Deplagne was waiting. 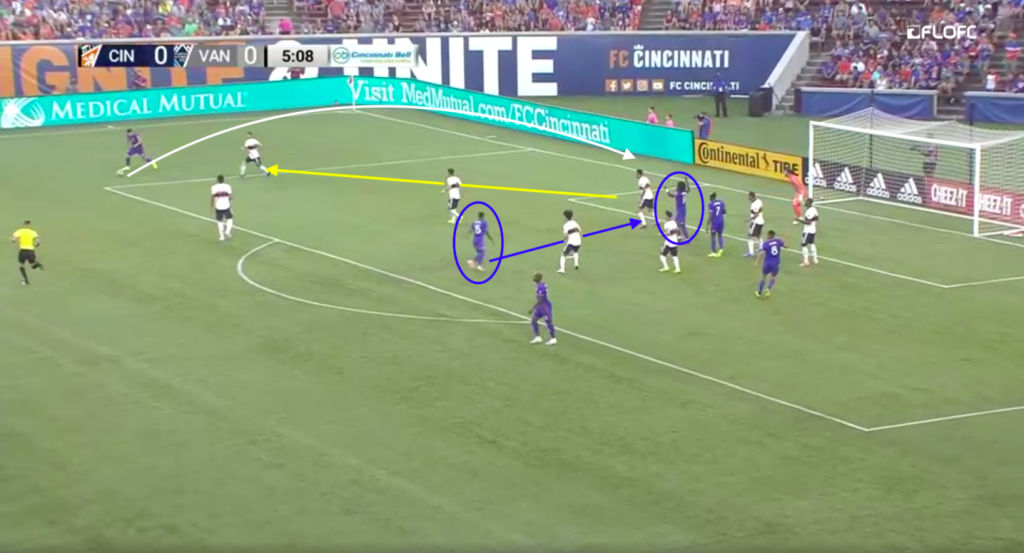 Nerwinski rushed to pressure Deplagne, and Mattocks was allowed to take up space between the two center backs. Godoy, now unable to keep tabs on either Cruz or Mattocks, was caught in no-man’s land by the cross. Mattocks rose to meet the ball, and a lucky deflection landed at the feet of Cruz. Cruz’s awareness and quick feet allowed him to put the ball past Whitecaps goalkeeper Maxime Crépeau.

Hwang’s late first half strike was well taken but took a bit of luck as it deflected off Kendall Waston and narrowly missed the outstretched leg of Maikel van der Werff before finding its way into the back of the net. The free kick that lead to the goal was needlessly given up by Caleb Stanko, who chopped down Ali Adnan when the fullback wasn’t going anywhere. 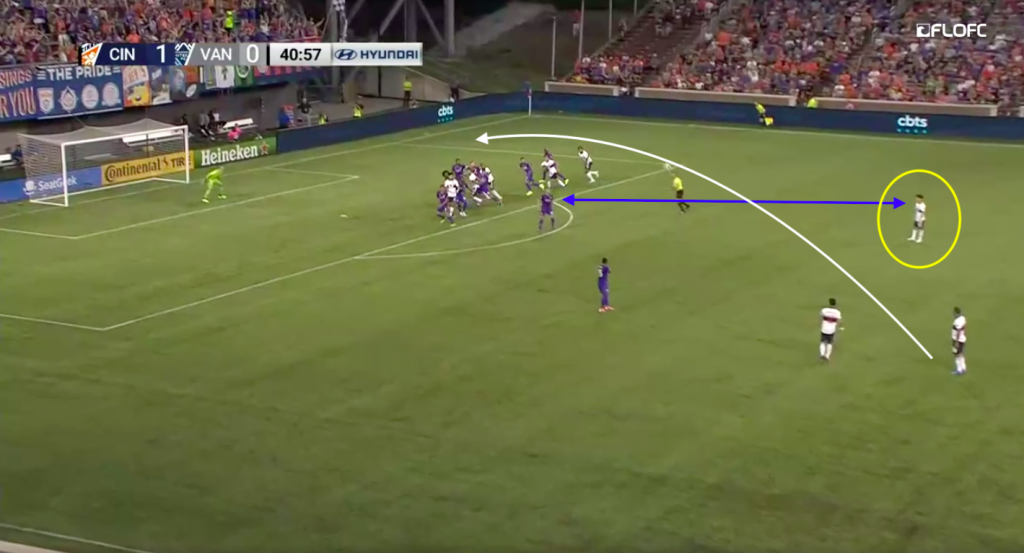 As FCC set up to defend the set piece, Stanko took up a position just outside the box. From here, his responsibility would have been to win any ball deflected into that area and to keep tabs on Hwang. 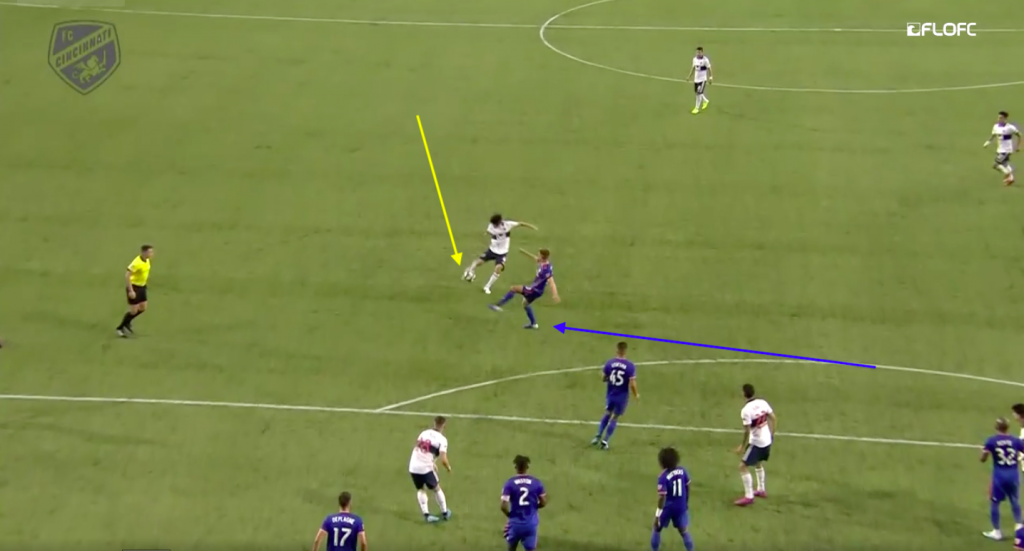 Waston cleared the ball out of the box on the initial free kick, but Stanko was unable to react as quickly as Hwang, who moved in to get off his strike just before being closed down.

Blame for Vancouver’s game-winner can be shared around the team equally. The move started with the midfield triangle of Frankie Amaya, Ulloa and Leonardo Bertone getting pulled out of shape. Amaya (blue circle) moved to cut off the central pass and push Teibert down the line, but Ulloa was not in position to provide appropriate cover for this. The triangle should have been positioned closer to the blue triangle in the image below. 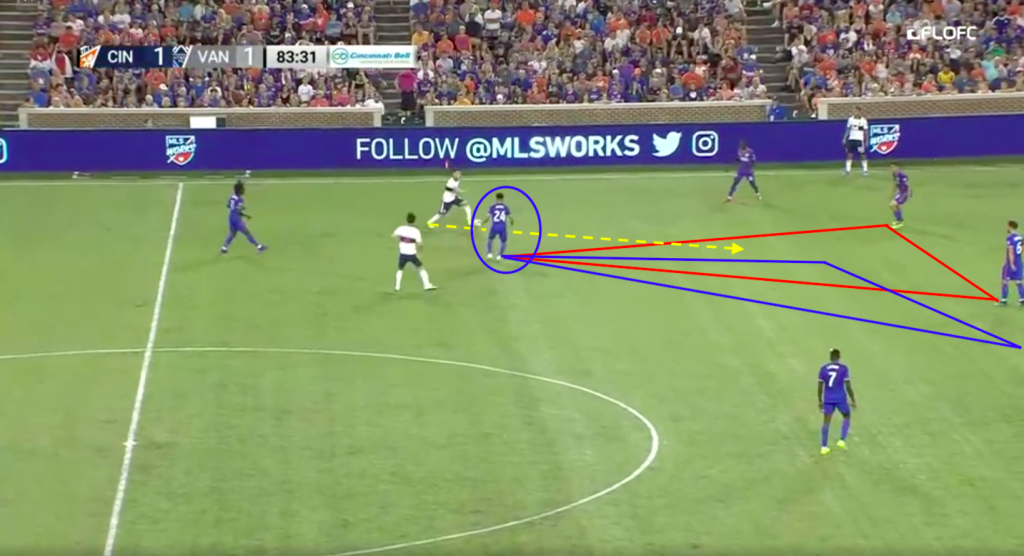 Because Ulloa was out of position, Teibert easily dribbled past Amaya and forced Kekuta Manneh (blue circle below) to step to pressure the ball. At this point, Ulloa should have dropped and moved toward the sideline, providing cover to Manneh’s pressure. This would have cut off the angle for the pass into Andy Rose, who was making a corner run from the center. Bertone had been pulled toward the ball, and should have taken up space closer to the red oval below. 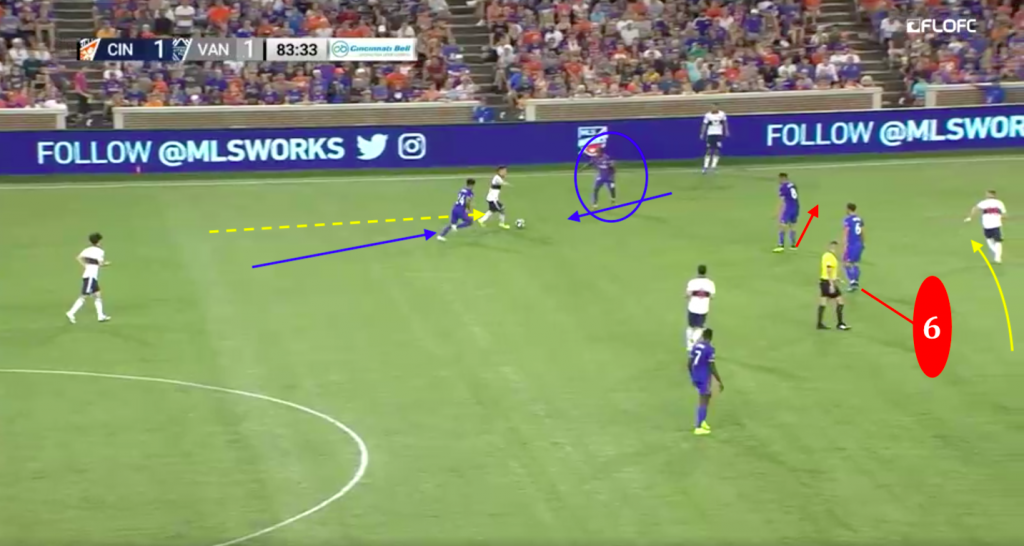 As Rose received the ball, he laid it off to Adnan, who put a one-touch looping ball in front of the run of Teibert. Though it’s impossible to say exactly who should have been tracking Teibert (yellow circle below), because he was running from midfield we have to assume the task would have been left to either Ulloa or Bertone, but both were preoccupied ball-watching.

As the ball looped behind the FCC backline, Waston was very slow to react. He may have assumed that Przemyslaw Tytón was going to come off his line, as many goalkeepers would have.

Finally, the image below shows that Deplagne hadn’t shifted right with the rest of his back line. Though Felipe wasn’t his mark per se, had he been better positioned he could have chosen to close down Teibert, leaving Tytón in goal to attempt to save Felipe’s shot, or he could have stayed with the run of Felipe. However, his positioning left him scrambling to make up the space left open at the crucial moment when the goal was scored.

Giving up goals late in the half is a sign of fatigue in a team. Is it mental or physical fatigue? Or both? Hopefully new coach Ron Jans can put a stop to it, but it will take some time.

Look for my regular edition of Talking Tactics on Wednesday, where I’ll break down the positives and negatives from this match.