Getting a result against Wayne Rooney and D.C. United was always going to be tough. But riding high on confidence, FC Cincinnati dominated possession and passing statistics for much of the match. However, the orange and blue still came away with a demoralizing 4-1 defeat.

I’ve been writing all year about how FCC has to find a way to pressure the ball in the middle and final thirds. It seems that the midfield is often just out of shape enough to make quick pressure impossible, and the back line lacks the confidence to step to the ball in dangerous situations. D.C. United’s first two goals were the direct result of players simply refusing to pressure the ball. 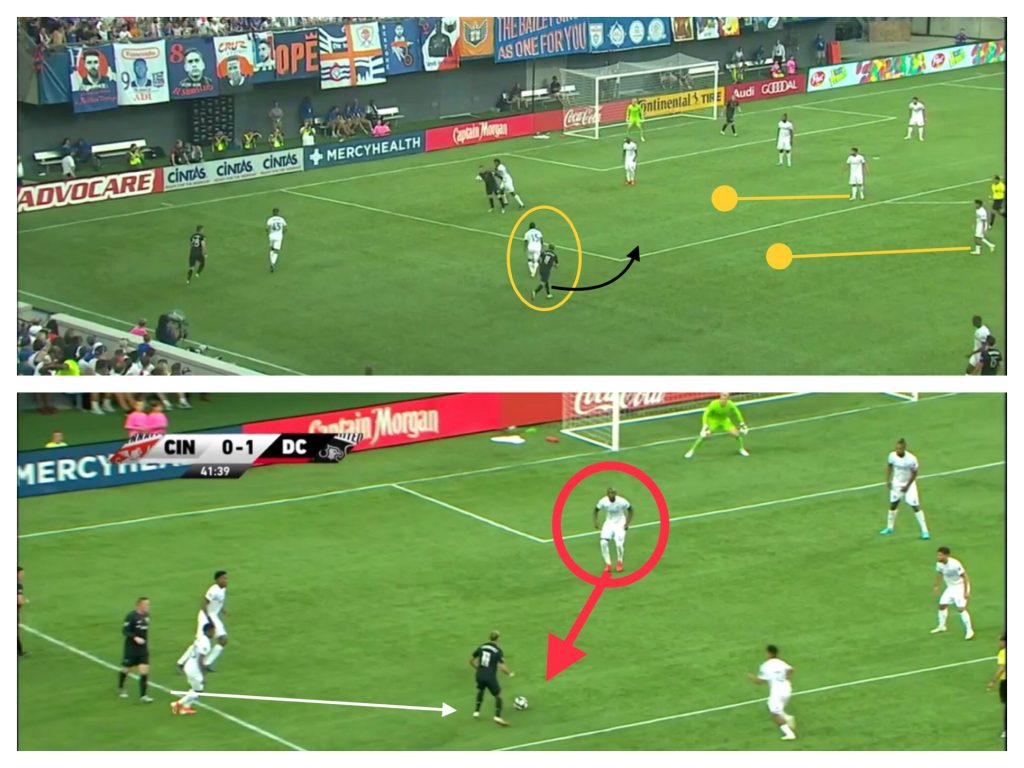 The first goal started when Allan Cruz dropped toward the corner to defend Lucas Rodriguez. After forcing Rodriguez to release the ball, he turned to watch as Rooney took possession, allowing Rodriguez to waltz into the box unmarked. Leonardo Bertone and Frankie Amaya were slightly out of shape and should have been tucked in a bit tighter toward the ball (yellow above). But once Rodriguez received the return pass, Justin Hoyte froze from 12 yards away in no position to affect Rodriguez’s shot, allowing the Argentinian all the time he needed to curl the ball into the far post. This is the moment when typically one would expect a center back to charge the ball and throw his body in the path of the shot.

The second goal was all too similar. Rodriguez once again picked the ball up in loads of space, and though Hoyte and Kendall Waston were well-positioned between the United player and the goal, neither elected to step out to pressure. As the near-side center back, the onus was on Hoyte, and once again he didn’t deliver. 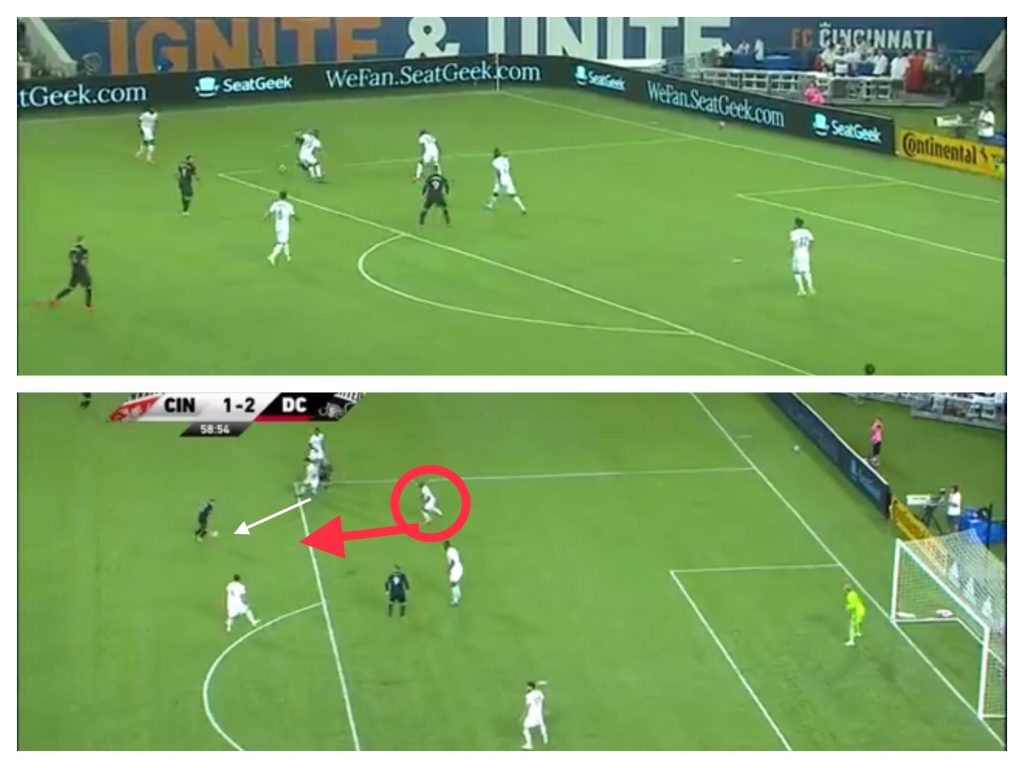 The fourth and final goal for D.C. United was comically bad. Hoyte got caught upfield and was badly outpaced by Paul Arriola (yellow below), but Waston had loads of time to consider stepping out to stop Arriola’s progression. A clean tackle, a tactical foul or even just impeding the speedy winger’s run to allow his teammates to recover would have sufficed. Instead he played spectator as the American carried the ball 50-plus yards and walked into Spencer Richey’s goal box unchallenged. 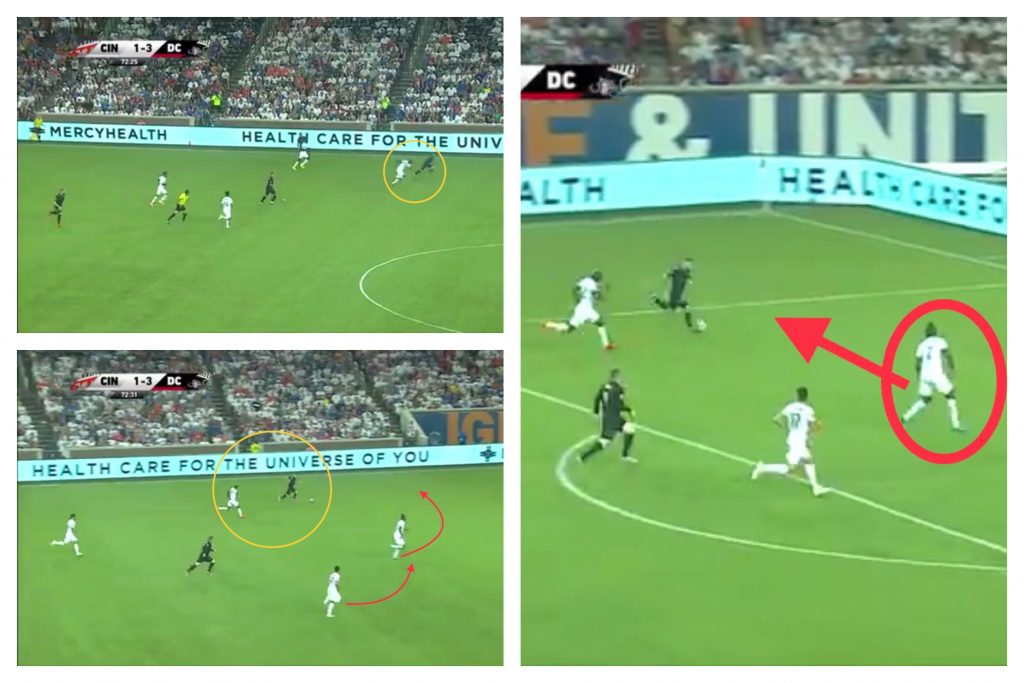 And There’s Still a Lack of Trust

Sandwiched in between the three goals mentioned above was the single-pass counter-attack that led to Rooney’s goal. When facing a single high striker, center backs simply can’t let the striker sit directly in between them. Instead, the ball-side center back remains a bit higher to prevent balls into the striker’s feet, and the weak side center back, Hoyte above, should drop a bit deeper to prevent balls in over the top (red below). But even after Rooney took the ball out of the air he was outnumbered 2v1. If Waston trusted enough to push the English striker toward Hoyte and let Hoyte make the tackle the odds would have been much better. Instead, Waston slid in between Rooney and the goal, allowing Rooney to cut back on his favored right foot and slot the ball home far post. 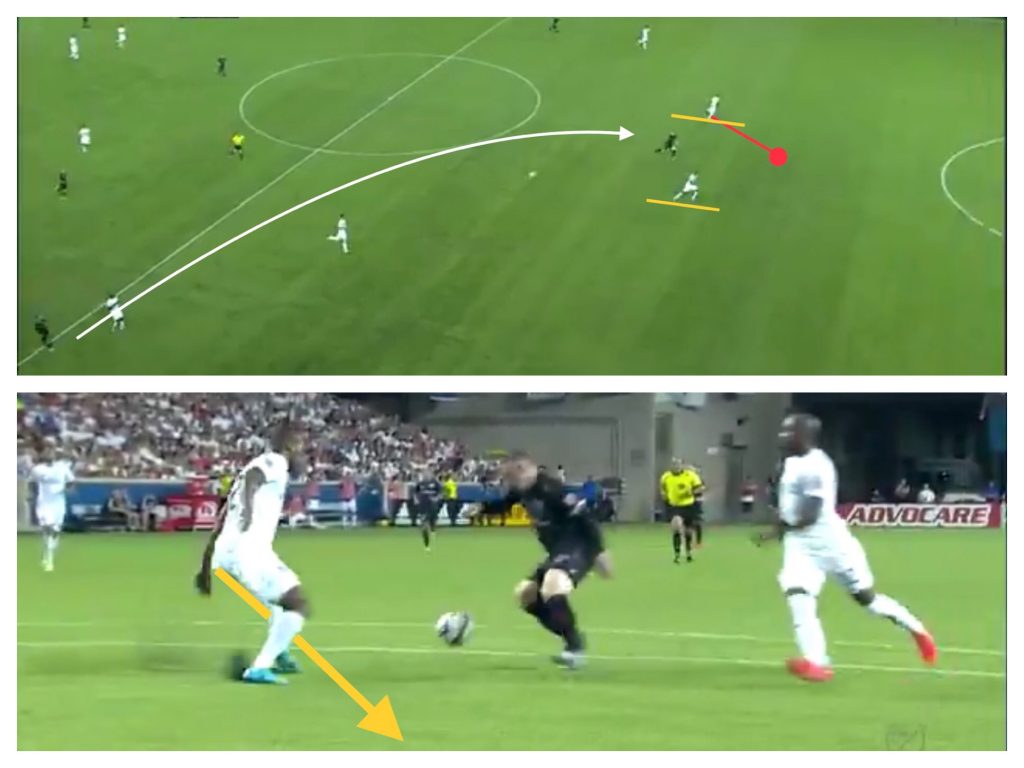 When Crossing Becomes the Right Option

On the offensive side of the ball FC Cincinnati was 5-for-18 crossing the ball. Crossing is often a low percentage way of scoring, so the top teams generally don’t do a ton of it. The key then is to cross the ball at the right time in the right situations. 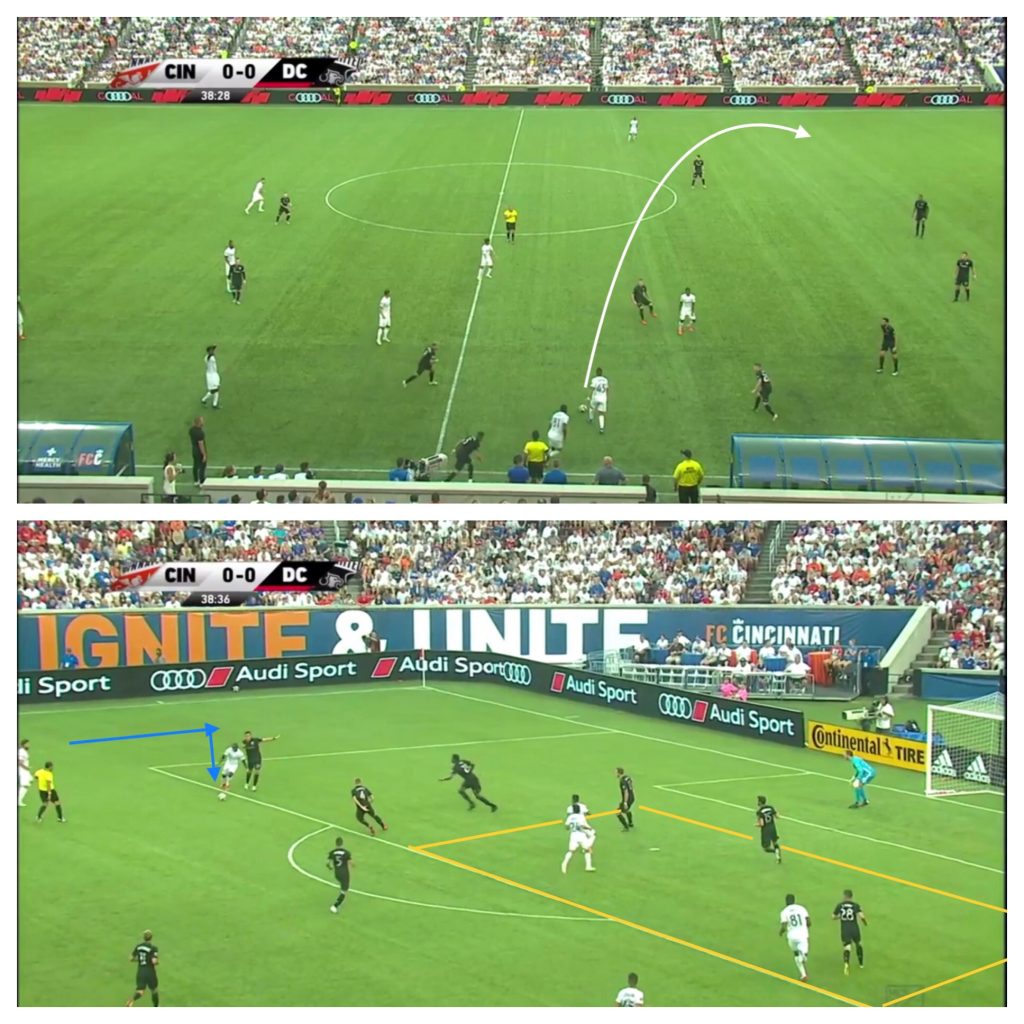 The image above shows one of Kekuta Manneh’s three blocked shots. In fact, the Gambian forward had three shots in total on the night, and none of them made it past the covering defender. Emmanuel Ledesma found Manneh on a beautiful cross-field switch of play, and the forward used his pace to take the D.C. United full-back deep before cutting back onto his right foot. At that moment Rashawn Dally, Cruz and Amaya all burst into the box and were 3v3 had Manneh chosen to whip the ball in. Instead he tried to shoot through traffic with a predictable result. 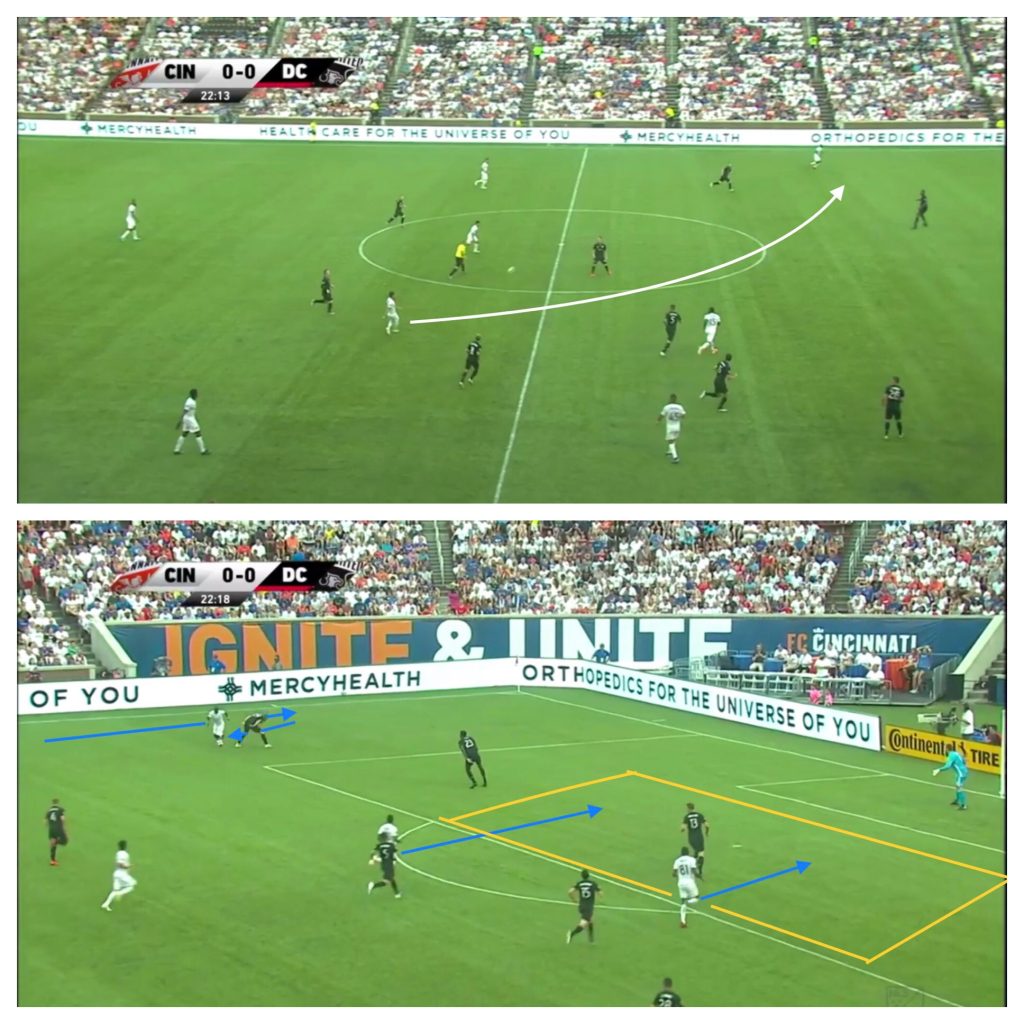 Earlier in the match, Manneh had squandered an even more dangerous opportunity as Bertone sprung the winger free with a wonderful long ball. This time after cutting back, Manneh had Cruz and Dally 2v1 in the box and could have played the ball into the near or far post. Again the winger chose not to cross the ball and the chance was lost.

When not much is going for your team offensively, it is crucial the correct decisions are made in key moments in the offensive third. And right now, FCC is too often choosing to shoot when a pass is the better option, or choosing to slow the ball down when they have numbers up and going with speed is the correct choice.

Can I Have Just One Shred of Hope?

Overall the team didn’t play that poorly. They dominated possession, passing statistics and even won the territorial battle, maintaining more than half of its possession in its offensive half. Also, Bertone had what I think was his best match of the year. He was constantly on the ball dictating play, made several key passes that showed his creative ability, completed 86% of his passes and contributed with two shots.

With Roland Lamah returning to the pitch, Amaya coming into his own, Cruz playing centrally and Bertone playing like he did on Thursday, FCC has the makings of a team that can win some matches. However, the back line continues to leak goals. Teams can build up play against it without pressure and create shots. Teams can counter-attack and beat its center backs with ease. Not much is going right with that unit of late, and that will have to change if FCC ever wants to be a consistent threat to take points of even the most average of MLS teams.