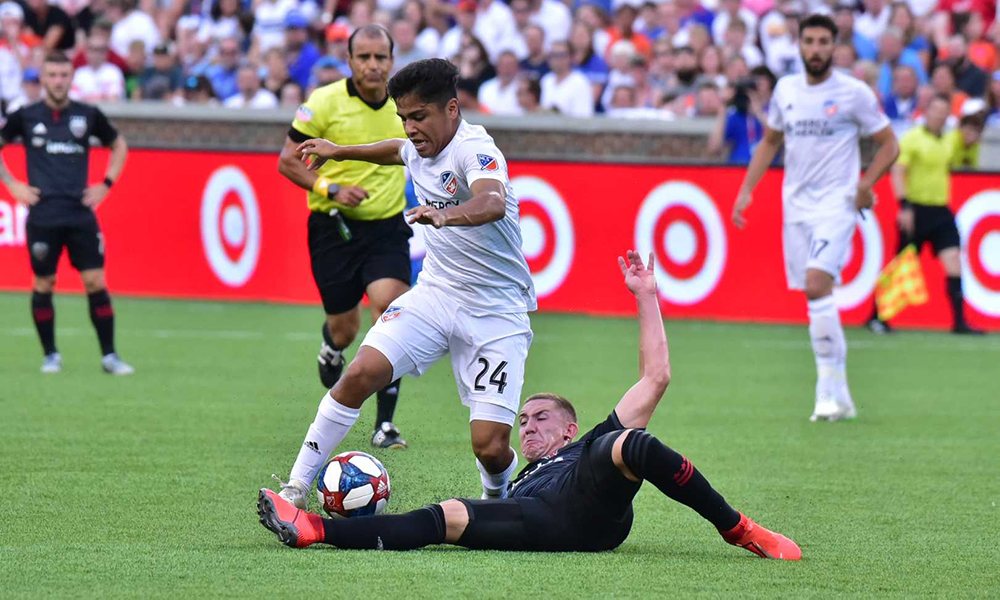 FC Cincinnati will need to forget about Thursday’s 4-1 loss to D.C. United quickly with the New England Revolution coming to town for a 6 p.m. Sunday match.

After a disappointing loss at home Thursday against DC United, FC Cincinnati has only days to prepare for its next match against the New England Revolution.

There is no time to sit around and complain about the largest deficit at home. There is only time to pick up the pieces and prepare for the next battle. FC Cincinnati hosts the Revolution at 6 p.m. Sunday.

FC Cincinnati still enters this match at the bottom of the standings with 17 points (5-14-2), but the last few matches have shown significant progress. With the return of the club’s players from the Gold Cup, FCC won two matches in a row before Thursday’s loss.

While this may not seem like an improvement for a club that had over 20 unbeaten matches in a row in its last season in the USL, it’s still a positive takeaway. And positive takeaways are not something that FCC has had in abundance this season.

In comparison to DC United, the Revs currently sit at eighth in the eastern conference with 27 points (7-8-6), 10 points ahead of FCC. This will be the second time the two clubs have met. Their first meeting ended with a 2-0 win for FC Cincinnati at New England. The Revs will be looking to return the favor on Sunday.

The Revs are unbeaten in their last five matches. After a mid-week match against Vancouver, the Revs brought home a 4-0 win. FCC will be counting on the Revs playing on some tired legs after two matches in six days.

FC Cincinnati will have a lot to prove at home. The Revolution is well aware that coming to Nippert Stadium can be difficult. FCC will be looking to use the fortress of Nippert to their advantage.

Sunday won’t be an easy match. The combination of weather, with an estimated heat index of over 100 degrees, a chance of thunderstorms and a New England team ready for another win will create a tough battle.

The key for FCC will be to come out strong — and stay strong. There have been a lot of solid improvements over the last few matches, and it’s imperative that they keep it up. A strong back line is going to be the biggest struggle. Even though captain Kendall Waston has returned, the back line can use some work. There is no word yet on when newly signed center back Maikel Van Der Werff will be joining the starting 11. It will be interesting to see if he and Waston can bring the back line together. Mathieu Deplagne has proven to be a solid piece to be defensive puzzle, but they all need to work together to take the pressure off of Spencer Richey.

Richey has had a tough time in goal lately, and not because of his talent. While FCC has given up an obscenely embarrassing amount of goals this season, Richey has put in a solid effort. A weak back line is one of the major contributors to this goal differential. While the individual players may be talented, there still appears to be a lack of cohesion and trust between them. This causes a lot of disconnect and a lot of added pressure on Richey.

On the offensive side, there may be more hope. Kektua Manneh has become a reliable starter and is known for creating chances. Roland Lamah also returned to the pitch for the first time in weeks against D.C. United. Allan Cruz and Fanendo Adi will also be available for this match. Creating chances and completing these opportunities will be the most important part of this match. In the end, it doesn’t matter how many talented players a club has if it’s unable to capitalize and put points on the board.

If FCC can come out strong and core first, it just might have a chance at winning at home.

Catch FC Cincinnati in action at 6 p.m. Sunday. Follow along with Cincinnati Soccer Talk on Twitter for our post-match analysis.