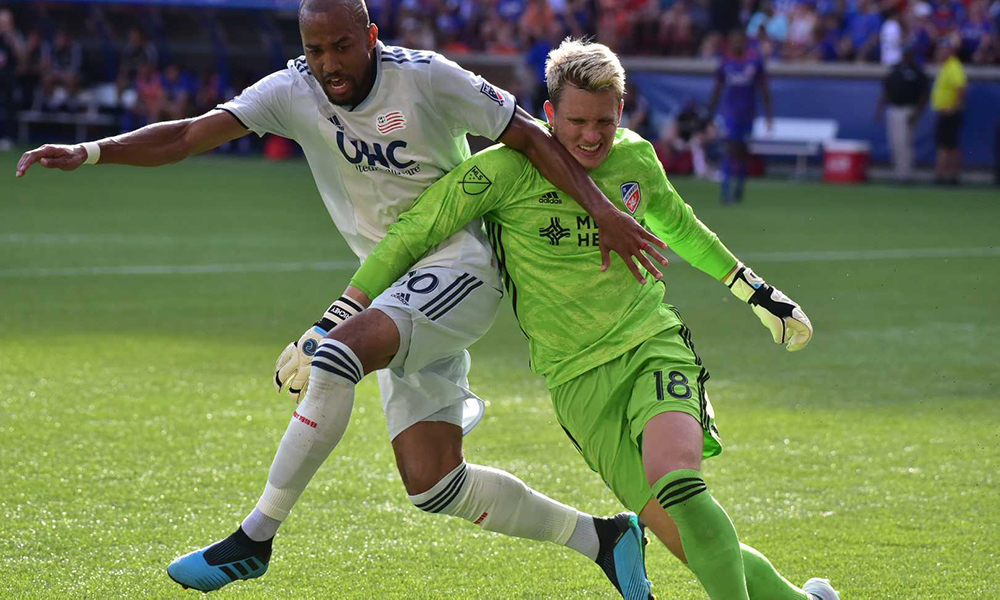 FC Cincinnati fell 2-0 to the New England Revolution on Sunday for its second home loss in four days and fifth home shutout loss of the season.

FC Cincinnati is used to Nippert Stadium being a fortress. This season it’s been anything but that.

The Orange and Blue fell behind nine minutes in and conceded again in the 55th minute in a 2-0 loss Sunday at Nippert to the New England Revolution. It’s two steps backward after two steps forward for the club and marks the second home loss in four days and the fifth home shutout loss of the season.

“In the first half, we didn’t show up with the right energy. We were very, very low — very, very deep. Not aggressive enough, allowing space and time on the ball. I think we let them play. We play at home, we expect more from us — expect to be dictating the play more than that.”

FC Cincinnati remains cemented in 12th place in the Eastern Conference with 17 points and a 5-15-2 record, including 3-6-1 at home. The Revolution are now unbeaten in their last 10 league matches and jump into seventh place with 30 points and an 8-8-6 record.

New England got on the board in the ninth minute. After a scramble in the penalty box, Carles Gil put one past Spencer Richey’s left hand.

Immediately after, the Revolution threatened to get another. Teal Bunbury hit the frame, and Cristian Penilla had a shot blocked. New England had 59.8% of first-half possession.

An early injury forcing a substitution didn’t help matters. Justin Hoyte subbed in for Mathieu Deplagne in the 33rd minute, leaving Damet just two options for the rest of the game.

FC Cincinnati closed the first half with two promising chances on free kicks just outside the penalty box but couldn’t convert either.

New England added an insurance goal in the 55th minute. Antonio Mlinar Delamea, left unmarked, headed one home after a short corner on service from Gil.

Mattocks subbed on in the 60th minute for his first minutes since June 1. After representing Jamaica in the Gold Cup, he was back home with family matters.

“It feels really good (to be back),” Mattocks said. “I miss these guys so much, and I’ve been gone for like six weeks. It’s really good to be around the guys again. I had a full week of practice this week. Definitely there’s way more that I can contribute to this team. I want to contribute much more.”

It marked just the second time this season Mattocks and Fanendo Adi were on the field at the same time and the first time FC Cincinnati had three forwards available for the same match. Adi started for the first time since the U.S. Open Cup match at St. Louis on June 19.

The offense was a little more lively in the second half, with 10 shots, including six on target. Revolution goalkeeper Matt Turner knocked away an Adi header at close range, and Allan Cruz put a close free kick over the bar.

“I think in the second half we showed a lot of indiscipline on the attacking side but also on the defensive side,” Damet said. “We created a bit more in the second half but it was unorganized. We gave up — again — a lot of space because of our stretch when we attacked.”

Next up:
at Toronto FC, 8 p.m. Saturday, BMO Field, Toronto