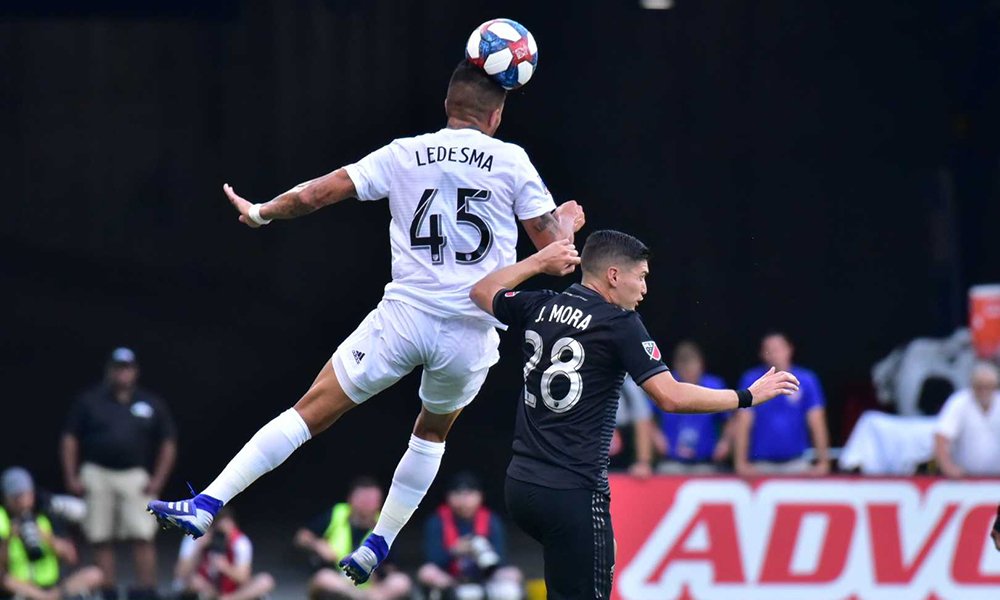 FC Cincinnati’s two-game winning streak ended Thursday at Nippert Stadium at the hands of DC United in a 4-1 loss.

Riding a two-game winning streak, FC Cincinnati faced one of the tougher teams in the Eastern Conference on Thursday. Even down Luciano Acosta for red card suspension, D.C. United could still dress Wayne Rooney, England national superstar, and Paul Arriola, U.S. men’s national team starter. No one expected it to be easy.

Unfortunately for the Orange and Blue, the winning streak came to a close in dramatic fashion in a 4-1 loss. While FCC has suffered some fairly large losses with the largest negative goal differential in the league, it managed to hold stronger in its home fortress, Nippert Stadium. Only one other time did it lose by more than two goals, and it had never given up four goals at home this season.

Cincinnati played well early in the first half. D.C. United bunkered into a 5-4-1 formation, staying very compact in the back and limiting opportunities for the home side. As the half wore on, FCC lost some of its intensity and seemed content to pass the ball out of the back and let the half close scoreless. The visitors reacted to Cincinnati’s drop in intensity and grabbed a goal off a throw-in to Rooney, who passed to ball to Lucas Rodriguez, who was unmarked. Rodriguez curled the ball around Justin Hoyte and into the far side of the net. The half closed 1-0 in favor of D.C.

FC Cincinnati returned in the second half with more intensity and was rewarded in the 54th minute with a penalty kick that Emmanuel Ledesma converted into a goal.

The energy that FCC got from the equalizer was short-lived, though. Only five minutes later, D.C. struck again, and the Orange and Blue never recovered, allowing three more goals in a span of only 14 minutes. First, from Rodriguez, again, unmarked in almost the exact same spot as his first goal. The second, a long ball to Rooney, with both Justin Hoyte and Kendall Waston marking him, he still got the ball and placed it low and in the corner past Spencer Richey. Finally, with Alvas Powell and Hoyte, caught very high, Arriola received the ball and took it for half the field to score the fourth goal, with only a trailing Hoyte providing any pressure.

“There is the discipline, the tactical discipline, at some point we switched off a little bit,” said interim coach Yoann Damet. “(We) lacked the focus defensively on the organization, started to give up a bit of space, a bit of time, between the lines and on the ball. They were about to combine a bit more to use the spaces and to get in behind and to exploit what we gave up. They have quality players up front. We knew that they wouldn’t need a lot to create opportunities and to score goals.”

Cincinnati held the majority of possession this game and played out of the back. This makes its possession and passing statistics look good, but it did not translate into more scoring opportunities or starving DC for opportunities. DC United had more than twice as many chances created and took almost three times as many shots on target. FCC continues to play a significant crossing game but struggles with accuracy. It took more than twice as many crosses as DC but essentially the same number of accurate crosses.

“(It was) a game that I think we controlled. In the first half, a lot of possession, unfortunately not enough opportunities created, ” Damet said. “We got punished at the end of the first half, a bit complacent defensively. In (the) second half, come back in the game on a PK before starting to give up a little bit of space, a little bit of time on the ball and we conceded three in the second half. So, difficult and disappointing for the group, because I think everybody thought we could have gotten the result.”

Next up:
vs. New England Revolution, 6 p.m. Sunday, Nippert Stadium