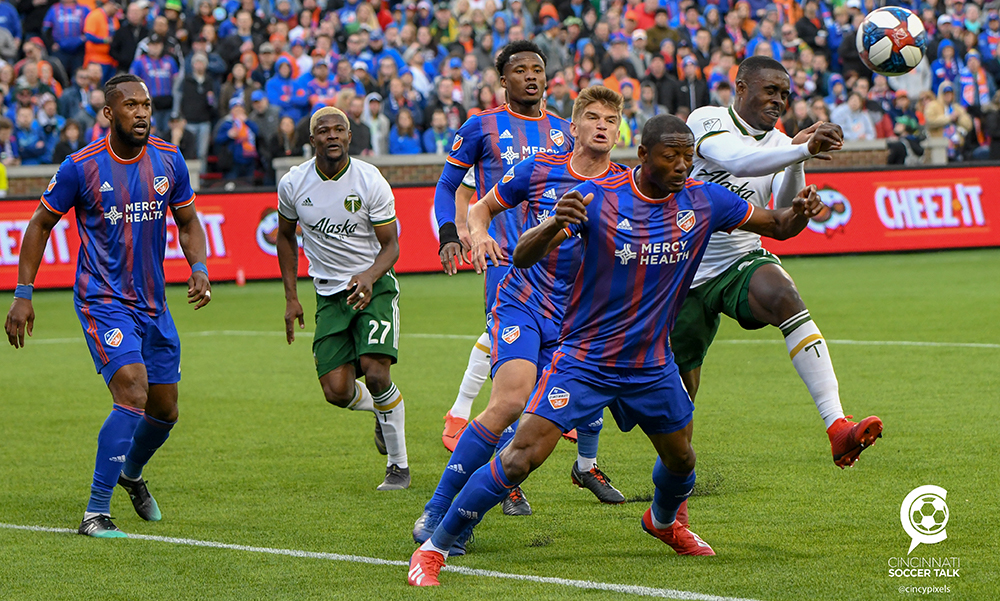 During the summer transfer window, the players a club sells can be just as important as the players bought. Who might FC Cincinnati look to sell?

The beginning of July marks an important time in MLS: The opening of the summer transfer window. This year from July 9 to August 7, soccer fans across the United States will fantasize about which players their respective club will bring in to help improve their team for the remainder of the season and beyond. Rumors have already started to fly, and while all information found on the grapevine is not trustworthy, it is still fun to follow nonetheless. However, the transfer window has another equally important function: Moving on from certain players. Although not as glamorous as going out into the open market and making a move to bring in a star-caliber player, selling players during the transfer window can help a team resolve chemistry issues, create financial flexibility and allow the club to reshape the roster moving forward.

Let’s face it, FC Cincinnati is not making the playoffs this season. (Unless all spiritual forces suddenly forget that they have cursed Cincinnati when it comes to anything related to the playoffs.) Honestly, that’s OK. Many expansion teams in the history of professional sports have not made the playoffs during their first season because it is a tall order. I’m just happy to see FC Cincinnati above the Columbus Crew in the latest installment of power rankings on mlssoccer.com. Knowing the odds of making the playoffs this season are slim-to-none, the club should not focus on short-term “band-aid” fixes but rather on moves that will help guide the club to success when it opens its new West End Stadium in 2021. While FC Cincinnati will bring new faces into the club during this transfer window, there are definitely players that FCC needs to move on from within the next month. The players that FC Cincinnati sell during the transfer window could have a more significant impact on the long-term success of the Orange and Blue than the players that the team buys.

Now, it might seem shortsighted and even awkward for FC Cincinnati to sell players that the club brought in less than nine months ago to help the team in its inaugural MLS season. However, with FCC focusing more on the long-term development of the club rather than having a “win-now” mentality,  in addition to the hiring of general manager Gerard Nijkamp, some players are no longer an organizational fit for FC Cincinnati. It is also clear that some players are not creating enough value to justify the wages that the club is paying them. For these reasons, it is important that FC Cincinnati moves on from several players that are currently on its roster.

However, sometimes professional sports teams are hesitant to move on from players even though they are performing poorly and contributing very little to the team overall. In the business world, this type of thinking is called the sunk cost fallacy. An example of the sunk cost fallacy is described below:

Because many individuals hate wasting resources (in this example, it is the money spent to buy a ticket), many people would feel obligated to go to the soccer game, even if they knew that they were not going to enjoy themselves, because they would be wasting money if they did not attend the game.

When talking about sports teams, the reasoning behind this thinking is that the team gave up a sunk cost in terms of resources (In this case it is money, time, other players, draft picks) to acquire a certain player. If the team were to trade or sell the player for less value than he were originally worth when they first joined the team, the organization feels like it has lost a value that cannot be recovered. Using this type of thinking, the team believes that it is better to keep the player even though he might be doing more harm than good or contributing very little value to the organization as a whole.

FC Cincinnati cannot use this type of thinking in determining which players to sell during the summer transfer window. Even though the club made sizable investments in certain players before the start of the 2019 MLS season, they can’t be afraid to move on from players that are not providing enough benefit to the club. While FC Cincinnati might not receive the full monetary value in a transfer that they once paid to acquire certain players, they will obtain value in other key ways. These things include cap room relief, financial flexibility when building the roster in future years, the ability for younger players to receive more playing time and a more cohesive locker room dynamic.

So continue to fantasize which players will join FC Cincinnati this summer, because I know I definitely will! Just remember that the players that will move on from FCC are just as important as the players the club signs during this transfer window. If FC Cincinnati can transfer out the correct players over the course of the next month, it is one step closer to building a foundation that will help them achieve long-term success in the future.