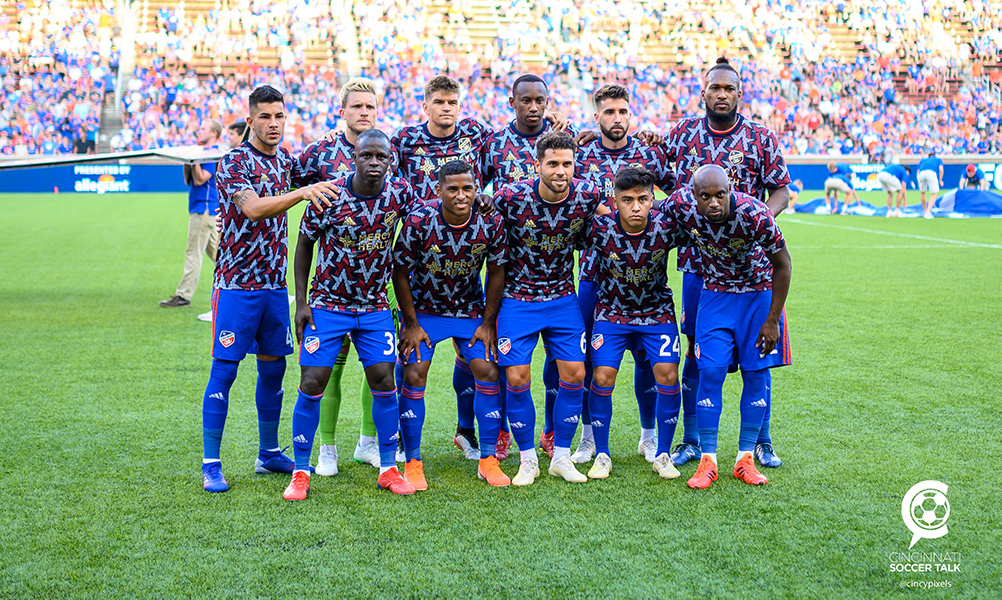 FC Cincinnati won its first league match since May 11 with a 3-2 win over the Houston Dynamo with goals from Kekuta Manneh, Rashawn Dally and Victor Ulloa.

FC Cincinnati won its first league match since May 11 with a 3-2 win over the Houston Dynamo on Saturday. The home team started strong with first-half goals by Kekuta Manneh and Rashawn Dally. Victor Ulloa added a third in the 61st minute after a howler by Dynamo keeper Joe Willis. The Dynamo clawed back late behind a penalty kick and an own goal, but it wasn’t enough to overcome the early deficit. Be sure to check out this week’s match report for more details of the match.

Richey’s Audi score got dinged after the late goals, but the young keeper couldn’t do much to stop those chances. He wasn’t asked to do much in the first half, but he was gutsy after taking Alberth Elis’s boot to the face late in the match. When the game was on the line in the final moment, he showed no hesitation to come out of his net and laid his body on the line to prohibit Aljaz Struna to get off a final shot.

The Frenchman was active on both sides of the ball, and his effort led to the second goal for the Orange & Blue. His ability to get forward more in possession with Frankie Amaya set up several chances. In the lead up to the second goal, Deplagne battled several Dynamo defenders while on the ground and had the presence of mind to find Dally streaking towards the goal after he came up with the ball. In addition to his offensive work, Deplagne did a great job to limit Elis. Elis seemed to be frustrated all match, and you can chalk that up to Deplagne’s play.

In his first match for FC Cincinnati since May 25, Waston played a crucial role in settling down the back line. While the back line wasn’t tested much in the first half, Waston made sure to step up to make big clearances late in the match. As the back line returns to health and a possible new partnership with Maikel Van der Werff, look for Waston to be the guy who rounds the group together.

Hagglund was responsible for the own goal in the 81st minute, heading the ball into the next past Richey. The center back was marking a streaking Elis and dove to head the ball wide of goal for a corner. Unfortunately, he got the calculation wrong, and the ball went into the net. While Hagglund played well for most of the night, winning five aerial duels and six clearances, he has moments where you are left scratching your head. If he is to earn the starting spot opposite Waston with the arrival of Van der Werff, he’ll need to be more careful with the ball.

Hoyte was sent out wide after spending most of his time as a center back over the last two months. He unnecessarily dove into the challenge in the 79th minute that led to the Romell Quioto penalty. Hoyte had plenty of cover and seemed to lose his head for a second with the team up three goals. Most will remember that mistake as a symbol of his performance, but he did a decent job getting forward like Deplagne. He played well with Leonardo Bertone and Allan Cruz in the middle of the park to shuffle possession forward. 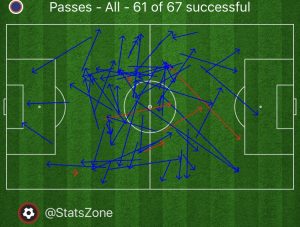 It was good to see Bertone back in the starting lineup alongside Cruz in the middle. While he didn’t have many moments of brilliance, he did a nice job to move the ball forward in possession. Take a look at the below pass map, as he completed 61 of his 67 passes (91%). He was all over the pitch connecting play while also providing cover in front of the back line.

We finally got to see Cruz play in his natural central midfielder position, and he didn’t disappoint. In the first half, his positioning higher up the pitch was critical in disturbing the link up play for Houston. He caused a turnover that sprung the Manneh goal. Plans had to change at the half with Amaya’s substitution, and Cruz had to shift forward into an attacking role. While not ideal, Cruz was able to create a scoring chance and get off two of his team-leading three shots. Saturday’s performance by Cruz should give FC Cincinnati fans hope for a brighter second half of the season.

It was a shame that Amaya had to come out at half with a knock. His plays up top with Cruz, Manneh, Emmanuel Ledesma and Dally was providing chances FC Cincinnati hasn’t seen much of late. His off the ball movement is brilliant, and he always looks to turn and get forward. There will still be moments as a rookie — he whiffed on a shot at the top of the box and then took a foolish yellow — but the future in the midfield could be bright with the Cruz-Amaya pairing.

Manneh gave FC Cincinnati its first lead in league play since May 19 at Orlando. He made a great run that led to the 29th-minute goal, and the shot was of equal brilliance. His third of the year crept just inside the right post and brought the Nippert crowd to its feet. In addition to his goal, Manneh created two chances and suffered three fouls in dangerous areas leading to FC Cincinnati chances.

Ledesma had a man of the match performance with two assists in FC Cincinnati’s win. It looks like his confidence is rising after back to back matches on the score sheet. His pass to set up Manneh was a thing of beauty. Ledesma picked up the ball quickly and threaded a long through ball to Manneh, who slid it past Willis. Ledesma also set up Ulloa for the third goal of the evening. While his season started off slowly, Ledesma now leads the team in assists with three.

Gutsy. That’s how I describe Dally’s performance Saturday night. The fourth-round draft pick picked up his first goal of the season but it was his hold up play that stood out to me. While there are some rough edges to polish, Dally proved to be an outlet for the midfield that has been missing this season. He had the ability to collect the ball and quickly pass it off to Ledesma or Amaya frequently. His strength will be an asset going forward, and that was shown with his ability to hold off the Dynamo center back for his goal.

Ulloa had to come in at half after Amaya’s injury. He picked up 472 of his Audi points with the third goal. His strike was fairly mundane, but Willis mishandled the shot that ended up being the decisive goal for FC Cincinnati. Outside of his goal, I thought his performance was average. Houston picked up its intensity, and the Bertone-Ulloa partnership didn’t have the same spacial relationship as Cruz from the first half.

You can see the lack of goals pains Adi. He almost pulled off a bicycle kick in the 76th minute and set up two chances for FC Cincinnati. It’s been an inconsistent year for Adi, but with more reinforcements coming in, it will be interesting to see if Adi can reclaim the magic that saw his as a double-digit scorer in MLS for three seasons.

Powell came in as a left back late for Mathieu Deplagne. He did have four major clearances in clean-up duty. It will be interesting to see his role in FC Cincinnati’s roster now that he has returned from Jamaican international duty, where most accounts say he performed admirably.