The addition of Allan Cruz in the central midfield made a huge impact on FC Cincinnati this past weekend.

FCC’s first half against the Houston Dynamo included two well-worked goals, an 85% pass completion ratio, and only one shot on goal conceded. But then, in the second half, the Orange and Blue conspired to concede 6 chances, gave up a penalty kick and an own goal while dropping to a 68% passing ratio.

The introduction of Victor Ulloa for an injured Frankie Amaya was largely blamed on the “flat” performance, but what did FCC do well in the first half that they didn’t in the second?

Saturday against the Dynamo, FC Cincinnati’s “young DP” was employed at his natural position in central midfield for the first time this season. He was excellent in possession, playing a key part in FCC’s three goals. His intelligent and tireless defensive pressing changed the dynamic in FCC’s midfield. 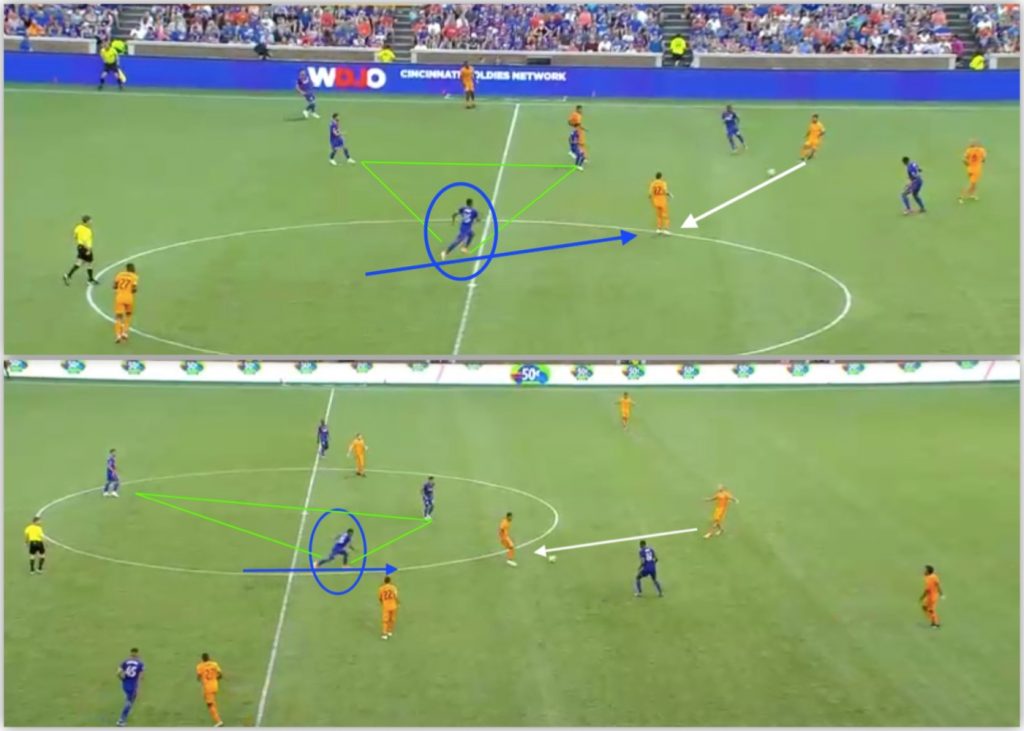 Cruz (blue circle above) spent most of the first half playing just off a Houston midfielder. He then picked his moment to spring forward and press to create a turnover. Coaches call this creating a “pressure pocket.” Simply, let the opponent receive the ball in a small pocket of space, then close that pocket quickly to create pressure. 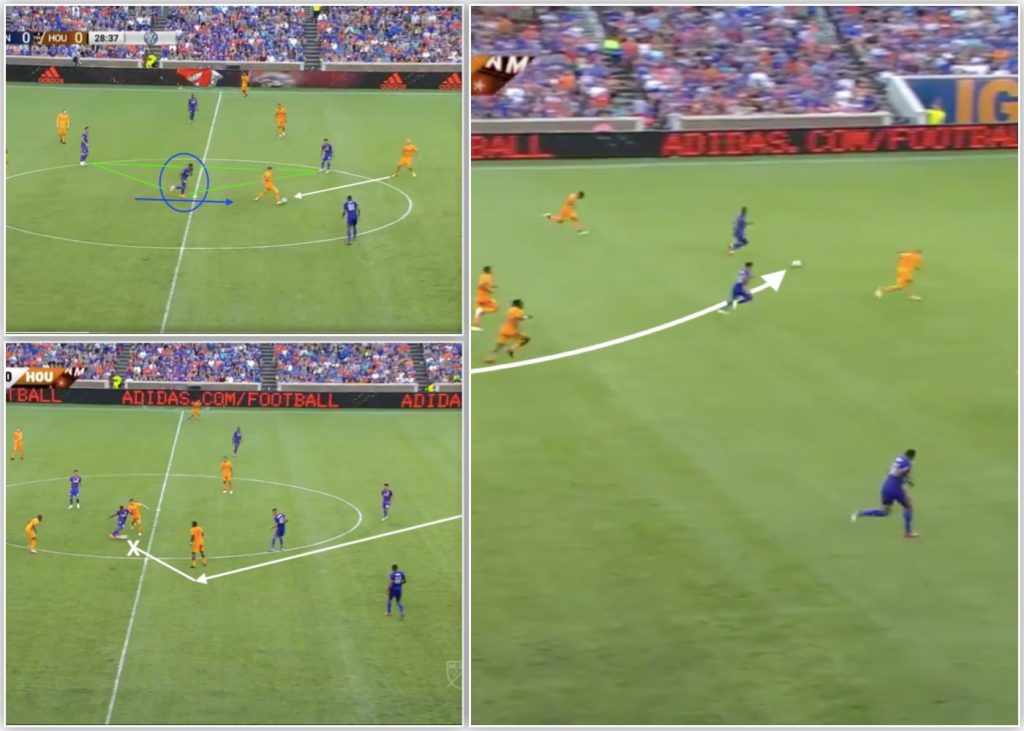 As the Dynamo looked to build out of the back through the midfield, Cruz baited Houston into a pressure pocket. With Emmanuel Ledesma tracking inside, Cruz created a turnover leaving Ledesma there to provide a perfectly waited pass into the feet of the sprinting Manneh for the far post finish.

The midfield triangle of Cruz, Amaya, and Leonardo Bertone positioned themselves as an inverted triangle with a single pivot going forward to press. On defense, it would shift to a stable triangle with a double pivot in the middle and final thirds. Cruz’s steady work rate and keen positional sense allowed this to function smoothly as he transitioned constantly from defensive midfield to an attacking midfield position. 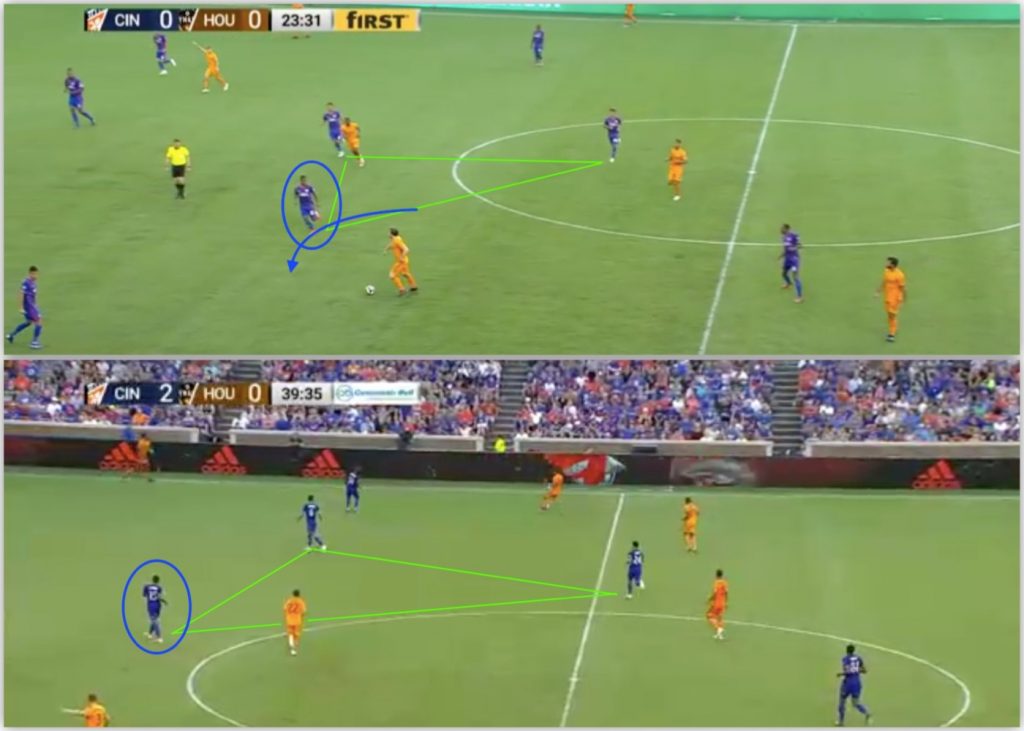 Defending with two holding midfielders at the base of the triangle allowed FCC to pressure Houston midfielders on the ball immediately. Houston was thus unable to play long balls isolating their wingers, and the FCC backline was untroubled by their speed disadvantage for much of the match.

Movement Up Top Creates Space Underneath

FCC’s 2nd and 3rd goals both resulted from great center forward play. Rashawn Dally’s 38th-minute strike was created by a fantastic slip pass by Mathieu Deplagne but was largely the product of his own movement and decision making. 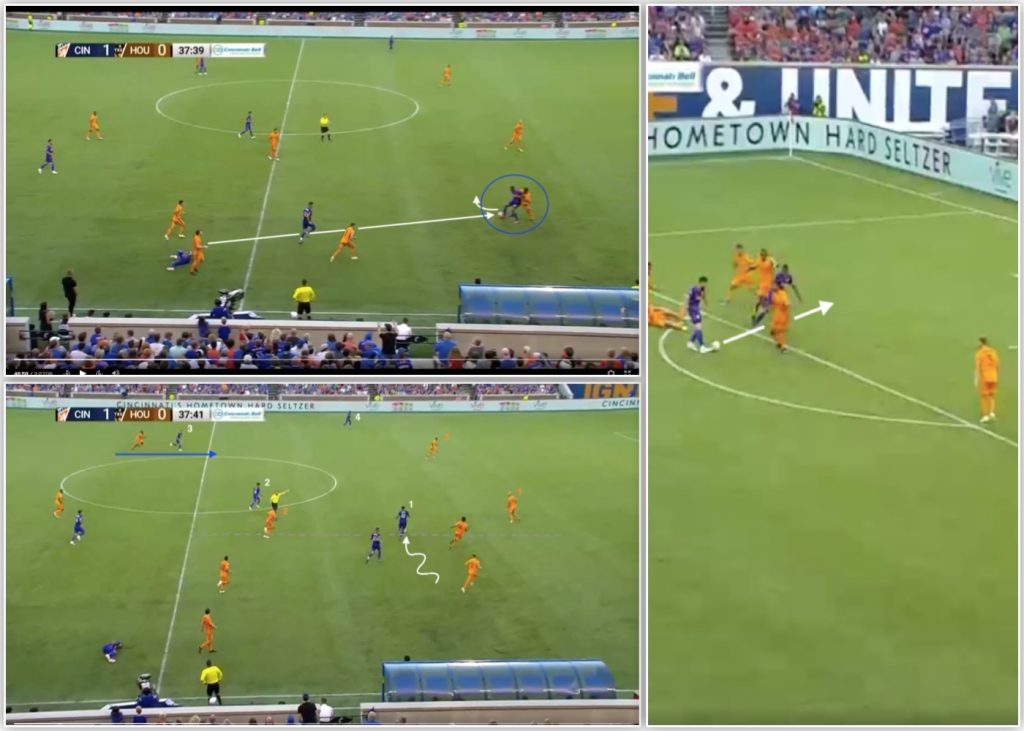 Dally used his strength to isolate himself against a center back to receive a pass from Cruz. He then took his first touch inside, dividing the field into a 4v3, bringing Deplagne into the move. Deplagne’s pass was a moment of beauty, and Dally left no doubt with a thundering finish.

Victor Ulloa’s second-half goal was unmistakably a goalkeeping error, but Dally did the work of creating space for the shot. 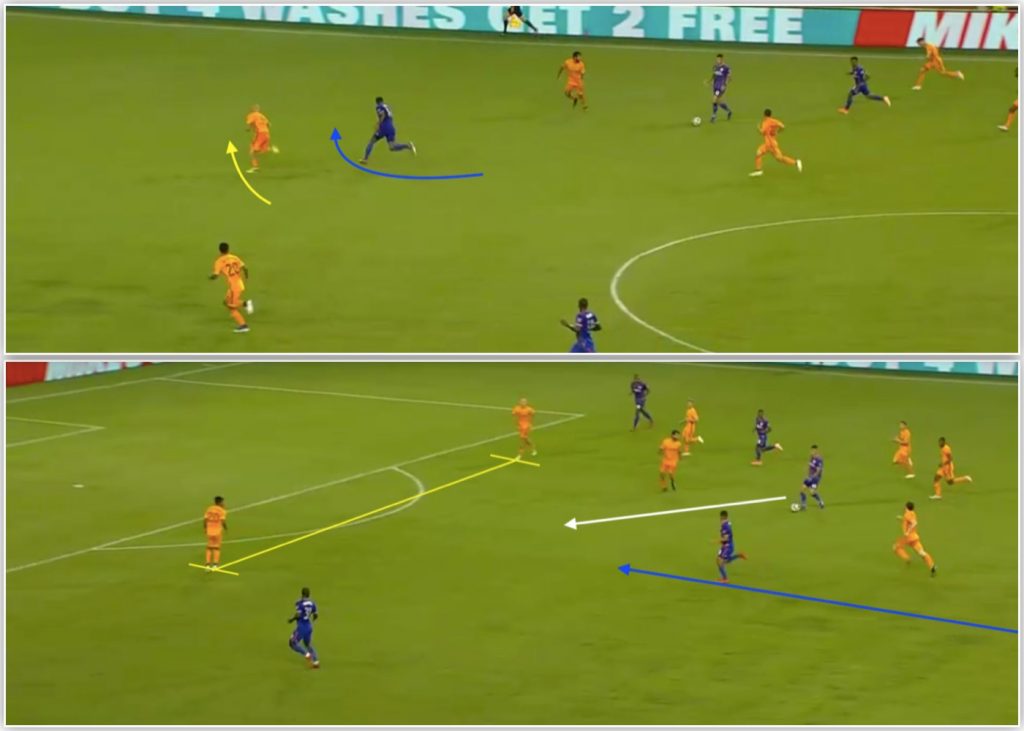 As Ledesma cut inside with the ball, Dally intelligently made a curling run to the corner, pulling a Dynamo center back out of position and creating a gap for Ulloa to run into. Ledesma placed the ball on a platter for Ulloa, who struck his shot well enough to go in.

But That Second Half…

Ulloa has been a stable force for FCC all season, and Cruz finished the match out in the center of the park, so why did it all go south?

With the injury to Amaya, Damet elected to sub on Ulloa to play attacking midfielder, keeping Cruz and Bertone in their first half roles. However, somewhere around the 70th minute, Ulloa began to drop deeper and Cruz began to push higher into an attacking midfield position. 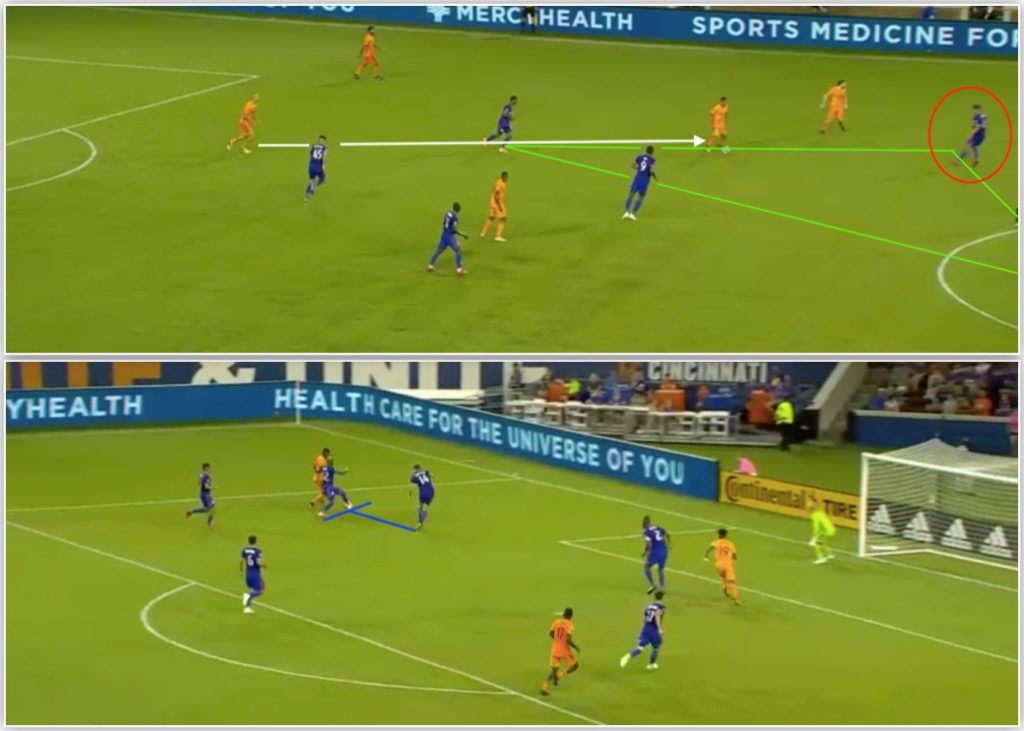 Ulloa (red circle), was then responsible for creating the pressure pockets. He is not as mobile as Cruz and was not able to effectively force Houston into playing short and backward. Houston’s first goal came when the Dynamo midfield had time and space to hit Romell Quioto in transition with a long pass. They were able to place Quioto in a 1v1 against a much slower Justin Hoyte. Nick Hagglund did a great job of providing close and effective cover, but Hoyte elected to go to the ground anyway and gave up an unnecessary penalty.

The Dynamo’s 2nd tally also was the result of a lack of midfield pressure, but this time it was from improper positioning. 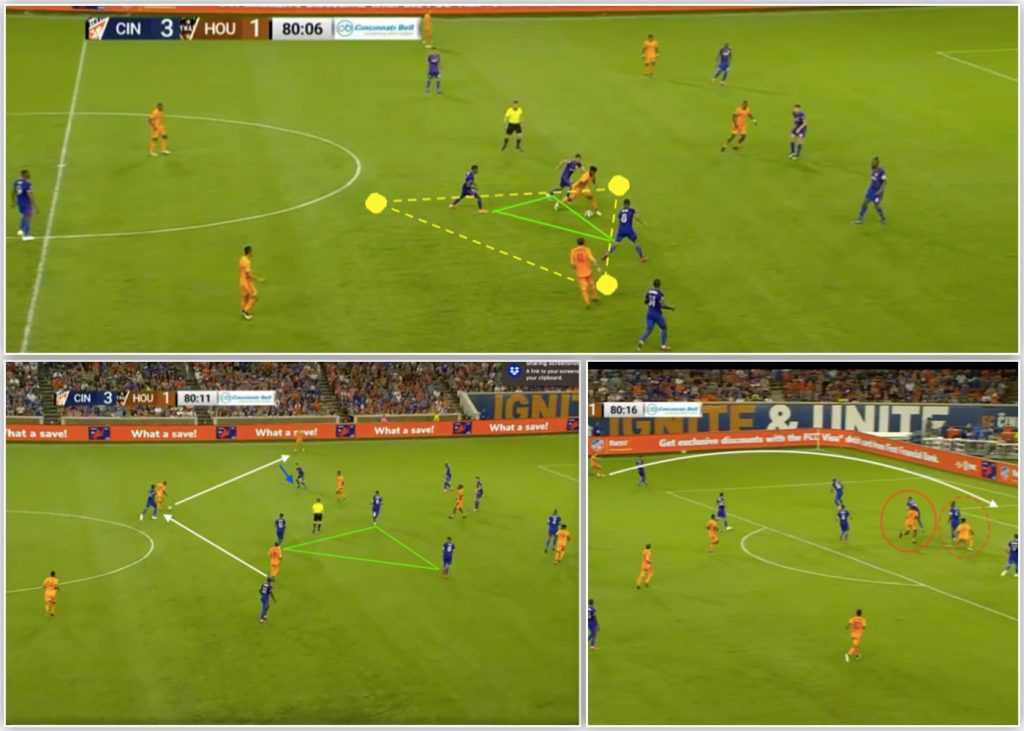 Ulloa and Bertone, operating as the base of the midfield triangle (green), struggled to close Houston down, allowing them to maintain easy possession. Cruz dropped deeper and deeper to help the duo out, effectively collapsing the midfield triangle. The midfield was unable to hold its proper shape (yellow), and center back Kevin Garcia carried the ball forward without pressure forcing Ledesma to pinch inside (blue) freeing up the left flank for Houston.

Finally, both Hagglund (red) and Kendall Waston (red dashed) got caught on the wrong side of their marks as the cross came in, forcing Hagglund into a last-ditch diving effort to clear the ball that ended up in the back of his own net.

Allan Cruz stabilized a midfield that had been having trouble effectively pressuring opponents. This pressure covered up for a general lack of speed along FCC’s back line, as Houston was unable to play long balls into their forwards. In possession, Cruz was able to provide options both centrally and wide, allowing wingers Kekuta Manneh and Emmanuel Ledesma to come inside at will.

On last week’s podcast, we spoke about how moving Cruz central could allow FCC to get better at two positions, winger and midfield. We were wrong. Cruz playing centrally made FC Cincinnati better at all positions. Hopefully, Yoann Damet can keep the young Costa Rican in his natural position and begin to build the future around him.