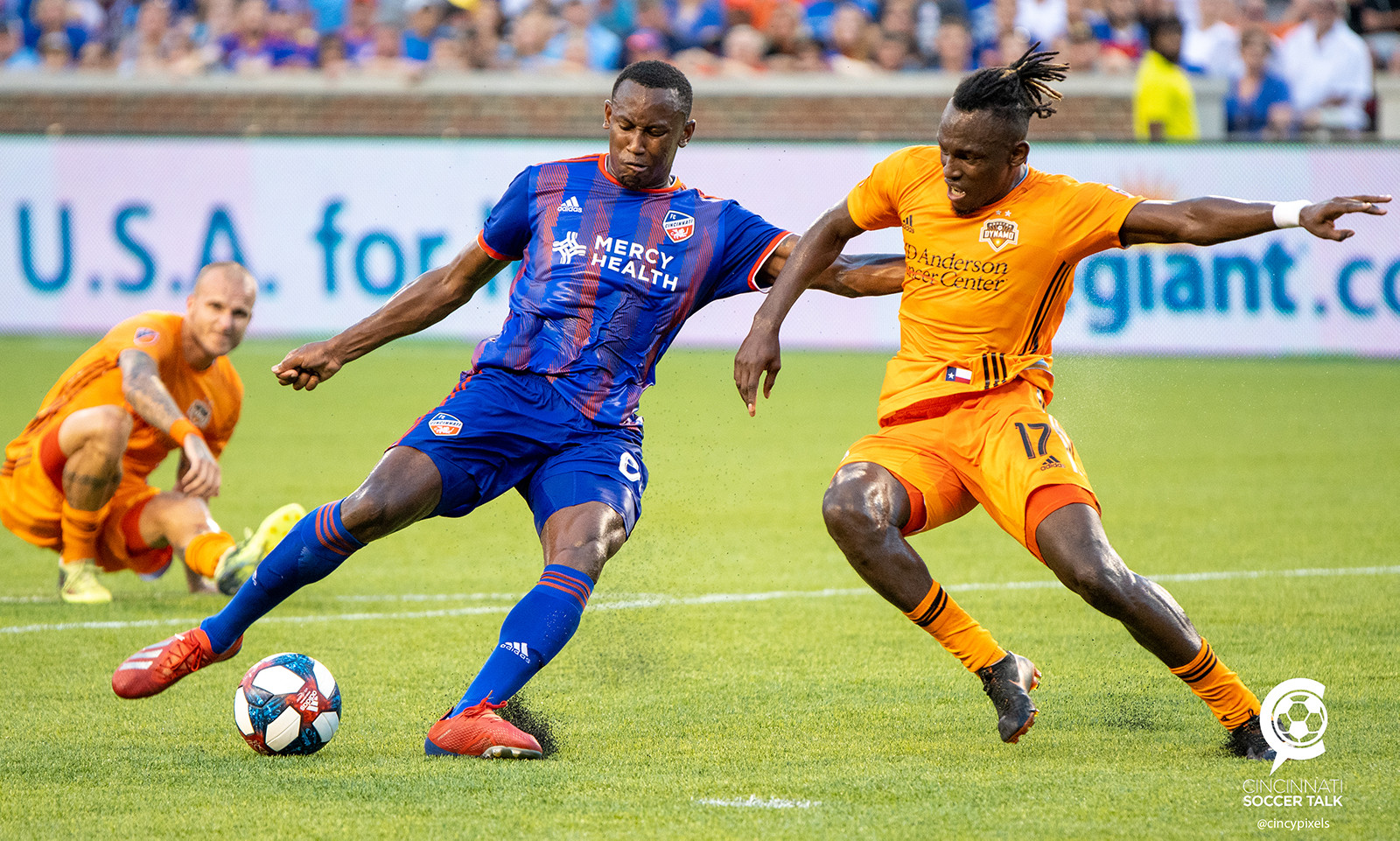 FC Cincinnati hung on for a 3-2 victory Saturday at Nippert Stadium over the Houston Dynamo to stop a six-game MLS losing streak. Rashawn Dally scored his first MLS goal for the Orange and Blue.

Kendall Waston and Allan Cruz only missed a couple of matches, but it must have felt like ages to FC Cincinnati.

Waston and Cruz provided much-needed reinforcement for the Orange and Blue as the club hung on for a 3-2 victory Saturday at Nippert Stadium over the Houston Dynamo. The result stops a six-game MLS losing streak lasting almost two months.

Ahead 3-0 after 78 minutes, FC Cincinnati almost gave away two points. In a span of 90 seconds, Romell Quioto scored on a penalty kick, and the Dynamo got another on an own goal from Nick Hagglund. Then in the final seconds of stoppage time, Spencer Richey blocked a shot from Aljaz Struna, then scrambled to collect the loose ball to preserve the victory.

“When Spencer had that hit (to the face from Elis’ boot), there was eight minutes left in the game,” Waston said. “We have to give everything. What happened, happened. We just have to win this game, whatever it takes. It doesn’t matter whether it’s pretty or ugly.”

FC Cincinnati moves to 14 points (4-13-2), just three behind 11th place Columbus Crew in the Eastern Conference. Houston remains in sixth in the Western Conference with 27 points (8-7-3).

Waston and Cruz missed two games for FC Cincinnati while on international duty for Costa Rica in the Gold Cup. Waston missed a third game because of yellow card accumulation.

“We need everyone,” interim coach Yoann Damet said. “We know every week is a new challenge, so we need our full squad. The guys that came back showed up strong again tonight. They were a big part of the performance.”

Said Waston: “It’s the worst experience ever because you want to do something but you cannot do anything. I was dying to be back, but at the same time I was enjoying being there (with the Costa Rican national team). I wanted to split myself (in half, to be in two places at once), but I couldn’t. Now I’m just enjoying being back. With this win, it’s perfect.”

FC Cincinnati started the match strong with 56.4% of possession and 290 passes in the first half.

After some early chances, the club broke through in the 29th minute. Cruz fed Emmanuel Ledesma, who then played a through ball to Kekuta Manneh streaking down the left side. Manneh slotted it into the far corner for a 1-0 lead, the first since the 24th minute on May 19 in Orlando.

Cruz, playing in a more centralized role as he does with Costa Rica, played an integral role on both ends for FC Cincinnati.

“I feel more comfortable playing the central mid,” Cruz said through an interpreter. “That’s the position I play in Costa Rica. But wherever the coach decides to play me, I’m more than happy to. I’m glad that he had the confidence to play me in my natural position.”

FC Cincinnati struck again in the 38th minute. Allowed to play the advantage after a foul on Cruz, Mathieu Deplagne stumbled just outside the box but got up with the ball and found Rashawn Dally, who scored just behind the penalty spot to extend the lead to 2-0.

It was the first MLS goal for Dally, picked 49th in the MLS SuperDraft. Dally said he did expect the pass from Deplagne when he got up with the ball.

“Once I saw the play develop, I saw the space,” he said. “I just backed up one step and then ran to that space. Mathieu played a great ball. I was glad that I was able to get on the end of it and put it in the back of the net. It was great. It was a feeling that I’ll remember forever. It was my first goal. I just want to continue to build on this.”

Dally made his second straight start, though Fanendo Adi was available as a sub after an injury suffered at the end of regulation in the U.S. Open Cup loss in St. Louis on June 19. Adi subbed on in the 66th minute.

“Rashawn has been training very well,” Damet said. “He earned his spot in training for his performances. Adi is coming back from an injury. We have to be careful. He could have started tonight, but Rashawn also earned his spot.”

FC Cincinnati’s midfield took a bit of a hit when Frankie Amaya left injured at halftime. Houston started the second half with some momentum. But Victor Ulloa, who subbed in for Amaya, shot from 19 yards out and put in between the hands and legs of Houston goalkeeper Joe Willis for a 3-0 lead.