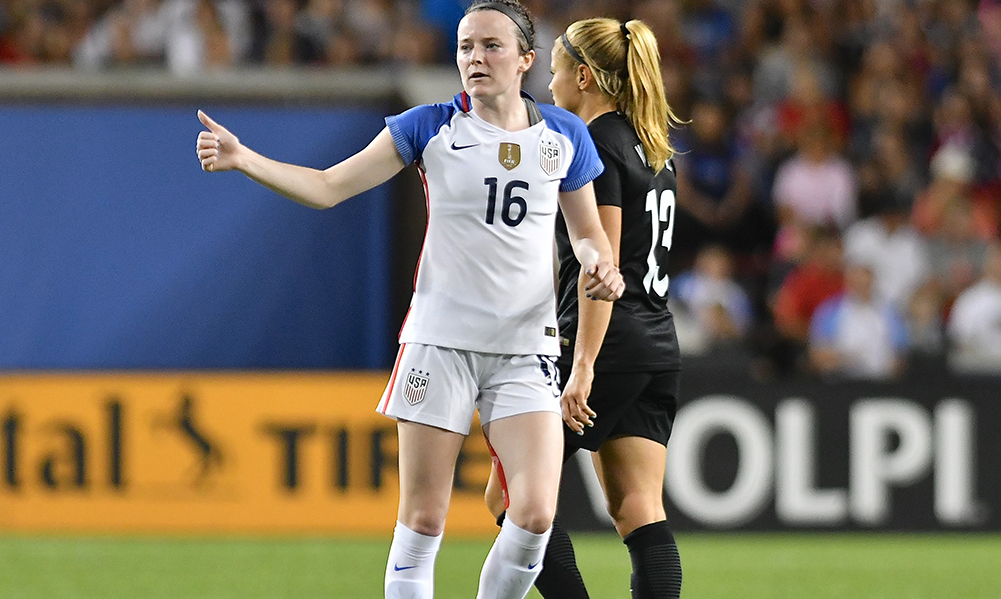 The U.S. women’s national team won its second straight World Cup and fourth overall on Sunday with a 2-0 victory over the Netherlands. Cincinnati native Rose Lavelle scored an insurance goal in the 70th minute.

Stade de Lyon was filled with a sold-out crowd on Sunday afternoon, and the whistle blew.

The U.S. has created its own reputation as an attacking force, scoring six goals throughout the tournament in the first 15 minutes of matches. The Netherlands knew this would be one of their biggest challenges — defending the attackers — and they were prepared.

If anyone thought the U.S. would have an easy time dominating the Netherlands in this match, they would have been wrong.

The biggest challenge facing the Netherlands would be the U.S.’s ability to score early and score often. Throughout the World Cup, the U.S. scored six goals in the first 15 minutes of a match. And the Netherlands had to put the pressure on early to prevent that from happening again.

While other U.S. matches started out quick on the attack, the Netherlands had no problem trying to shut it down.

Fatigue might have been a concern before the match started, but it wasn’t obvious seeing the Netherlands on the pitch. It came out defensively strong, holding the U.S. The Netherlands became the first team from the tournament to prevent the U.S. from scoring in the first 15 minutes.

The U.S. was itching for a goal, and it took its chances. A free kick in the 10th minute taken by Tobin Heath was cleared in the box, but the U.S. didn’t give up. In the 16th, Rose Lavelle had a beautiful shot on target, but it was blocked at the last minute.

The Netherlands kept the U.S. on its toes, even taking its chances running the ball and trying to capitalize. In the 27th minute, the U.S. was awarded its first corner kick, taken by Megan Rapinoe. Julie Ertz got her foot on it, but it was blocked by Sari van Veenendaal.

Another corner kick came for the U.S. in the 37th minute when Alex Morgan was taken down in the box. Similar to the results from previous corner kicks, there was no result.

After a slew of fouls and deflected corner kicks, the first half was coming to a close. Minutes before the half, Kelly O’Hara and Lieke Martens collided, and both players were down. It took a few minutes, but both eventually got up and finished the half.

By the time of the half-time whistle, quite a few patterns ended. The Netherlands were the first club to hold the U.S. scoreless until the half. This was also only the second match of the tournament where the U.S. did not go into the half with a lead.

The second half started with Ali Krieger replacing an injured O’Hara.

The U.S. was ready to go on the attack, knowing that the fate of the match depended on that first goal. In the 52nd minute, Crystal Dunn took a shot that would’ve set the U.S. ahead, but it was just wide. But it wasn’t Dunn’s only attempt of the night.

Sam Mewis forced a turnover in the 57th minute for a U.S. throw in. Morgan had a run down the pitch but was taken down in the box by Stefanie van der Gragt. A high boot to the shoulder of Morgan resulted in an initial call of a corner kick. But there was a video assistant referee review of the penalty, and the official awarded the U.S. with a penalty kick.

Rapinoe stepped up to take the penalty kick. Van Veenendaal appeared to freeze as soon as the ball left Rapinoe’s foot. The ball hit the back of the net, and the U.S. was up 1-0 in the 61st minute. This was the first time the Netherlands had trailed in a match throughout the entire tournament.

Rapinoe’s successful penalty kick put her in the lead for the Golden Boot Race, ahead of teammate Morgan. She had a total of six goals and three assists throughout the tournament. Rapinoe was also the oldest player to score in the Women’s World Cup at age 34. This penalty kick was also Rapinoe’s 50th goal for the U.S.

The momentum started to build, and the U.S. did not hold back. Barely 10 minutes later, Lavelle made her mark on the biggest stage in the world. With a strong left foot, she sent the ball through two Dutch defenders and straight past the goalkeeper, making the score 2-0.

Once the U.S. gets started, it is hard to stop it. And the Netherlands had its work cut out for it. Krieger had a strong cross to Morgan, who took a shot, but it was headed away. Moments later, Dunn had a shot on goal that bounced off of the keeper. The U.S. received a corner kick that produced no result.

The last 10 minutes of the match was a flurry of U.S. runs and chances. More opportunities were created in the last 10 minutes than the entire match to that point. Between Christen Press, who subbed in at the 79th minute to replace Rapinoe, and Morgan, the U.S. had more chances to score and increase the gap.

Even though the U.S. couldn’t capitalize on the chances at the end of the match, it still had the lead by the time of the final whistle. The U.S. beat the Netherlands in a 2-0 victory, winning the World Cup for the second time in a row and the fourth time overall.

This tournament was not easy. It was the most challenging tournament so far on the biggest stage ever. But the U.S. team has a history of being wildly successful when the pressure is at its highest.

These are the stories that children are growing up with. Children getting introduced to the sport at a young age are going to learn all about this club and the barriers that have been broken. By then, maybe it won’t seem so ground-breaking — maybe it’ll just be the new normal.

That is more important and long-lasting than any title or championship. Trophies will gather dust, winning streaks can be broken and forgotten. But the feeling that this win has given people will last a lifetime.