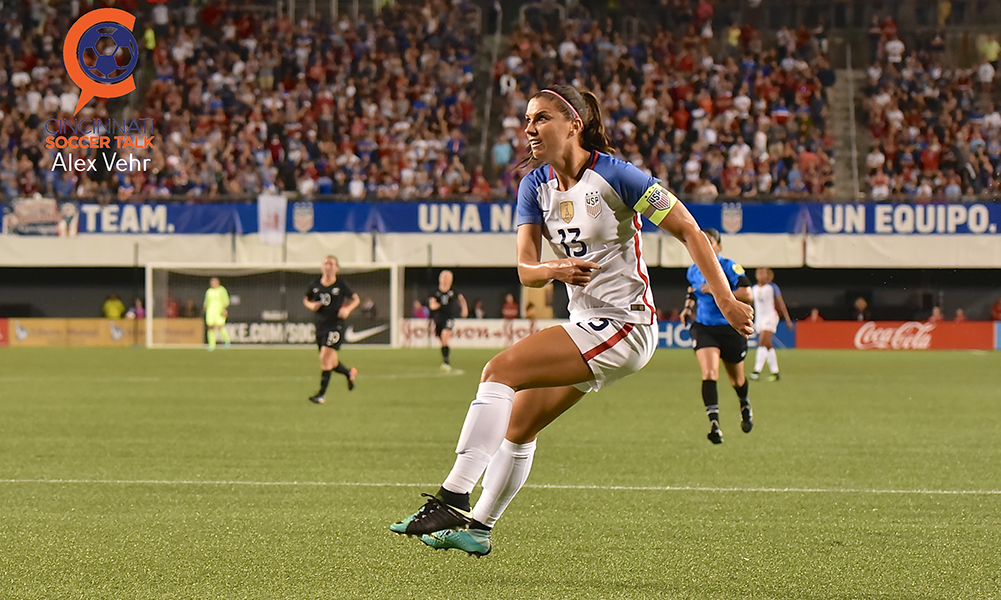 The U.S. women’s national team survived in the World Cup semifinal round against England and will now play the Netherlands in the final on Sunday.

The United States started its 2-1 win over England in the World Cup semifinal on Tuesday in front of the largest crowd of the event so far.

In front of a crowd of over 57,000 people at Stade de Lyon, the U.S. was ready for an England team that wanted nothing more than to beat it.

In the previous five matches between the U.S. and England, the U.S. had won four of those matches; the fifth was a draw. All eyes were on the U.S. as star Megan Rapinoe was listed on the bench for this match with a suspected hamstring injury. Rapinoe’s surprise exclusion from the starting 11 put Christen Press, giving her the big World Cup moment she was waiting for.

The U.S. started out its third consecutive semifinal in typical fashion — with a strong attack and no fear. Within three minutes, Tobin Heath had a strong run down the pitch but was fouled, resulting in the first corner kick of the match for the U.S. England deflected, but midfielder Rose Lavelle got her foot on the ball, taking a shot. Once more, England blocked the shot, but the U.S. coming strong out of the gate was enough to get the Lionesses worried.

In the fifth minute, England fouled Alex Morgan, giving the U.S. a free kick about 25 yards outside of the box. Press stepped up to take it in Rapinoe’s stead, but it was a little too high. But the U.S. kept the pressure on even during England’s run; Becky Sauerbrunn was able to clear out England’s shot, keeping the score at 0-0.

This clear gave the U.S. another change, and Heath ran down the pitch. She had a clear pass to Lavelle, who got the ball to Press, who headed it in. This goal was Press’ first goal in the 2019 Women’s World Cup, and it was a beautiful shot.

Press’ header put the U.S. ahead, 1-0. This was the sixth goal scored by the U.S. in the first 15 minutes of a match this tournament. On the other side, this was the first time England had trailed in a match during the 2019 Women’s World Cup. Until this goal, England had gone 380 minutes without conceding a goal.

Lavelle was on fire throughout the match, a big difference from her match against France, where she struggled. She played her best against the Lionesses, aiming for another shot in the 16th minute, but it was just a little high. It was clear that she wanted another goal, and she wasn’t going to give up.

But the U.S. faltered for a brief moment, in the 19th minute, when England tore down the pitch. Ellen White was the one to put England on the scoreboard with her sixth goal in five matches, leveling the score at 1-1.

That was not enough to worry the U.S., and Lavelle took off again with another shot on goal. Carly Telford, England’s goalkeeper, was a wall when she blocked Lavelle’s third attempt of the match.

England found its momentum in the 28th minute. Lucy Bronze ran down the pitch. Even surrounded by four U.S. defenders, she managed to pass the ball for a shot, but it was just wide. England was awarded a corner kick, but it resulted in nothing, and the score remained at 1-1.

Minutes later, the U.S. had its chance, and Alex Morgan made history with the second header of the night. After a perfect pass from Lindsey Horan, Morgan became the first player in Women’s World Cup history to score a goal on her birthday. The header that put the U.S. ahead 2-1 was the best way for Morgan to celebrate her 30th birthday. This was also Morgan’s first goal since the opening match, where she scored five of the 13 goals against Thailand. This goal also put Morgan back in the Golden Boot Race with six goals and three assists.

England responded in true Lioness fashion by having its own shot at leveling minutes later. Alyssa Naeher barely saved the ball; if her fingertips had not brushed it, it would’ve been in the net. The brush of the fingertips sent the ball just over the crossbar.

Frustration and a bit of fatigue started setting in, and England was starting to feel it. When a team gets frustrated, it starts making sloppy fouls, and Millie Bright was fouled. Bright was fouled in the 40th minute due to an arm and hand in Morgan’s face, and she received her first yellow card of the match.

In the U.S. free kick that followed, the header was just missed. The first half ended with the U.S. maintaining their narrow lead of 2-1 over England.

The second half started out with the U.S. eager to find that third insurance goal.

Horan was fouled within the first couple of minutes of the second half, receiving a yellow card. England was awarded a free kick that fell directly into Naeher’s arms.

The slow start to the second half was riddled with fouls. Both England and the U.S. were fighting for possession, eager to level the playing field or increase the goal discrepancy, but neither club would capitalize.

In the 64th minute, Lavelle was taken down, gripping her hamstring. Considering the issues she had with her hamstring previously, U.S. coach Jill Ellis decided to make her first substitution of the match. Sam Mewis came in to replace Lavelle in the 65th minute to avoid any further injuries. Lavelle came out of the match just at her prime; this was the best match of the tournament.

Only minutes later, England was hungry for another goal, and it looked to have one due to White, who would have had a brace. In the middle of England’s celebration, there was a video assistant referee review. The review was for a foul inside the box, though there is a lot of support reasoning that the goal was offside anyway. The goal was taken away from England, leaving the score at 2-1.

Although the referee didn’t overturn the offside call, she did rule in favor of a foul in the box. And England was awarded a penalty kick, and the U.S. waited with bated breath to see if the score would be leveled. If England made this penalty kick, with the way possession and the way the match was going, it would be very likely that the match would go into extra time.

England stepped up to take a shot, and Naeher got into position. The referee blew the whistle, and England took their shot. The crowd went silent

And Naeher stopped it. Naeher blocked the penalty kick, ensuring that the U.S. lead held on just a little bit longer. If she had been looking for her World Cup moment, that was it. It was the third penalty, out of four, that England had missed throughout the entirety of the tournament.

hey @MuseeLouvre, we got your next masterpiece. you’re welcome. pic.twitter.com/4SEX5ULkuY

A blocked penalty kick did not hinder England’s mentality; it still fought until the end. But a couple more sloppy fouls worked against the Lionesses. Bright was called for a second yellow card due to another foul on Morgan, resulting in a red card. England was left to play the remaining 10 or so minutes of the match one player down.

The U.S. knew the match was coming to an end, but they didn’t push for another goal. Rather, they killed some time, even when England started to press more.

In the end, the U.S. maintained their 1-2 lead over England, securing their spot in their third consecutive World Cup final.

Wednesday’s match between the Netherlands and Sweden would determine the U.S.’s opponent in the 2019 Women’s World Cup.

Smart money would’ve been on Sweden, but there’s always something to be said for the underdogs.

The Netherlands started off its sixth consecutive match with the same group of players. It was very possible that fatigue would be a major component of their play.

The Netherlands also had a lot to prove going into this match. It was the European Champions in 2018, so this match was its second straight major final.

But Sweden is not a team to be overlooked; after all, it had just knocked Germany out during the quarter-finals.

Sweden outplayed the Netherlands throughout the majority of the match. The Netherlands goalkeeper had a lot of saves on her hand. Sweden attacked more, but the Netherlands World Cup history was on their side. It had been 0-0 at their previous five World Cup matches, and it had come back to win all of them.

By the end of the 90 minutes, the score was still 0-0, and extra time was imminent.

The match between Sweden and the Netherlands was the first Women’s World Cup semi-final match to be settled in extra time.

Who ya got, the @USWNT or the Netherlands? pic.twitter.com/m5seDr3BtF

The U.S. have won 11 straight matches in the 2019 World Cup. This is the best winning streak in tournament history.

The U.S. is also the first side in history to reach the final in three consecutive seasons. This is its fifth finals appearance total in tournament history.

If the U.S. win on Sunday, it will be their second Women’s World Cup championship in a row and their fourth championship overall.

Sweden will face England at 11 a.m. Saturday to determine the third place winner. The U.S. will face the Netherlands in the final at 11 a.m. Sunday.