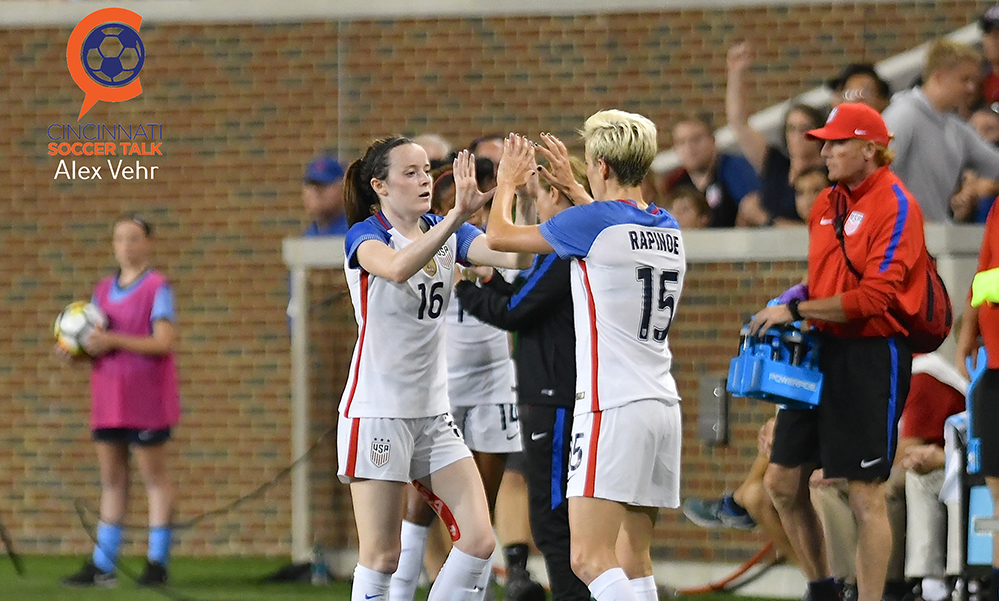 The USWNT faced its toughest opponent so far in the 2019 Women’s World Cup on Friday. A brace by Megan Rapinoe led to a 2-1 victory over France and a berth into the semifinal round against England on Tuesday.

On Friday, the United States women’s national team faced its toughest opponent yet during the quarterfinal round of the 2019 Women’s World Cup with a 2-1 victory over France.

It was widely suggested that France would be the U.S.’s biggest challenge, and that turned out to be true.

The start of the match started out in the U.S.’s favor. Megan Rapinoe got the U.S. on the scoreboard first in the fifth minute. Rapinoe scored off of a brilliant set piece, sending the ball through the legs of almost eight different players. Somehow this ball didn’t touch a single person, but it hit the corner of the net perfectly.

But it wasn’t all cherries on top from there.

The U.S. struggled, and it felt like it played from behind for the majority of the match. The French defense worked the U.S. over, taking down Rapinoe multiple times on bad fouls. Diani, the French forward, gave the U.S. a run for its money.

Crystal Dunn, one of the U.S. defenders, was one of the shining stars of the match. She went toe-to-toe with Diani, blocking one of her shots that could have leveled the score.

France took a corner kick in the 29th minute, and Alex Morgan played a crucial role in preventing a scoring opportunity. But she went down hard and took a few moments to recover.

Luckily, the referees called for a hydration break, giving all of the players a chance to refuel and catch their breath. The hydration break was definitely needed,  as temperatures were in the 90’s  at Parc des Princes. An extreme heat warning had already been issued in Paris for the day.

With only 15 minutes until halftime, France wanted to score, and it took every chance it could. In the 40th minute, Amel Majri and Kelley O’Hara collided outside of the box. France was awarded a free kick that was blocked by Alyssa Naeher.

.@mPinoe is on another stratosphere right now and we’re so lucky to witness it. pic.twitter.com/eS6c7af2F8

At the start of the second half, the U.S. tried to come out strong, but it still struggled. The U.S. received two corner kicks in five minutes but couldn’t capitalize. Immediately after, France also had two corner kicks that resulted in nothing.

France came out on the attack, and it briefly threw the U.S. off of their game.

But the U.S. found its mojo again in the 64th minute. Morgan created a passing channel, slotting the ball back to Rapinoe, who fired off a second shot. Rapinoe secured her second World Cup brace in two consecutive matches.

The U.S. played with confidence for the rest of the match, but France wasn’t going to go down quietly. In the 80th minute, Wendie Renard headed the ball into the net, finally getting France on the scoreboard.

And France was rejuvenated by this score, hoping  it would lead to an equalizer. This opportunity came in the 86th minute with a France free kick. But it went just wide, leaving the score at 1-2 at the time of the final whistle.

The final whistle solidified the U.S.’s move to the semi-finals.

The U.S. might have been up by two, but one wouldn’t have been able to tell that by the stats. France had over 60% possession, over 400 passes, with a 78% pass completion. The U.S. struggled with 39% possession, only 291 passes, with 64% pass completion. The U.S. had half as many shots as France, but twice as many shots on target.

But stats alone aren’t the only indicator to how well a team does during a match. While the stats may have worked against the U.S., it still won the match, ending France’s World Cup run in their own country.

While many said that facing France would be the U.S.’s toughest challenge, there is no point in looking behind. Now, the U.S. must look forward to facing England on Tuesday.

The U.S. and England have only faced off once in World Cup history — in 2007, where the U.S. won 3-0. This will be England’s second time making the World Cup semifinals; its first chance was in 2015, where it lost 2-1 to Japan.

History may be on the U.S.’s side, but it is clear that no one can view any match as easy in a World Cup cycle. No matter the outcome, the U.S. has proven, time and time again, that it doesn’t crack under pressure and that it welcomed every challenge with grit and perseverance.

Live in the pressure 🤨

We’re headed to Lyon for a semifinal clash vs. England!#FIFAWWC | #OneNationOneTeam pic.twitter.com/1LsWNbNdqA

On Saturday, the final two teams advancing to the Women’s World Cup semifinal round were decided.

The Netherlands beat Italy in a 0-2 win in the sweltering heat in Valenciennes, France. The match was a tough one, in which Italy wanted to prove why it had made it so far. This was only Italy’s third appearance in the Women’s World Cup. Italy’s last two appearances were in 1991, the first Women’s World Cup, and again in 1999.

Similar to Italy, this was only the Netherland’s second appearance in the Women’s World Cup. Its first appearance was in 2015, where it lost 1-2 against Japan in the Round of 16.

Both of these teams had something to prove in hopes of making it even further. Italy was seen as the Cinderella Story of this Women’s World Cup, but its fairy tale came to an end against The Netherlands.

The Netherlands maintained the majority of possession and had twice as many shots and shots on target. It completed 450 passes to Italy’s 267 with an 81% pass accuracy. Italy received four yellow cards while the Netherlands received zero.

As Italy’s Cinderella story came to an end, Sweden’s came to fruition. For the first time, Sweden finally beat Germany, when it mattered the most.

The German national team is one of the most successful teams in women’s football. It won both the 2003 and 2007 Women’s World Cups. Sweden had never beaten Germany, especially in a match as important as a World Cup quarterfinal.

Sweden knew how important this win was, and it brought its best squad and a thirst to win. Even after Germany scored first in the 16th minute, thanks to Lina Magull, Sweden didn’t give up hope. Sofia Jakobsson scored six minutes later in the 22nd minute, putting Sweden back in the match.

Shortly after the half, Sweden was at it again; this time, Stina Blackstenius scored in the 48th minute right after the start of the second half. This was the first time in Germany’s cup history that it had given up a lead and two consecutive goals. In fact, up until Sweden’s first goal, Germany hadn’t conceded a goal all season.

When the full-time whistle blew, Sweden had upset Germany, advancing to the semifinal for the second time in its history.

History was made for Germany as well. This was the first time in its history that it had lost a match after scoring the first goal.

This success for the Sweden team goes a long way beyond the hopes of bringing a title home. Their next step in the Women’s World Cup is changing the way people look at female athletes.

And that’s not just true for Sweden — it’s true for countries everywhere. The rise of women’s soccer is happening worldwide — not just the year of the World Cup. In fact, just days ago, the USWNT set a record for the amount of jerseys sold in a single season — for men and for women.

The perception regarding female athletes is changing, and that is something that will be remembered forever.

The U.S. will go toe-to-toe with England in the semifinal round at 3 p.m. Tuesday.

Sweden will face the Netherlands at 3 p.m. Wednesday.