Our tactics man Brad Gough breaks down the ugliness in FC Cincinnati’s 7-1 loss to Minnesota as well as Emmanuel Ledesma’s first MLS goal.

There are many themes that have emerged during FC Cincinnati’s six-match losing streak in league play: an inability to score, frailty in defending set pieces, a lack of depth in the squad.

All of those were present in FCC’s embarrassing loss to Minnesota United FC. The Loons scored their first directly from a set piece and their fifth from a scramble directly after a set piece. The other five goals exposed another set of prominent deficiencies that continue to plague the orange and blue: a lack of desire to close down attackers in dangerous areas and an undisciplined attitude toward defensive positioning.

The Most Dangerous Player

Hassani Dotson’s 23rd-minute goal was a well-struck screamer that had loads of movement. However, the FCC defense was more than willing to continue to backpedal and provide the young defender with all the space he needed to unleash such a strike. When defending numbers down, the rule of thumb is to always pick up the most dangerous player. When a player is running with the ball inside shooting range, he is the most dangerous player. 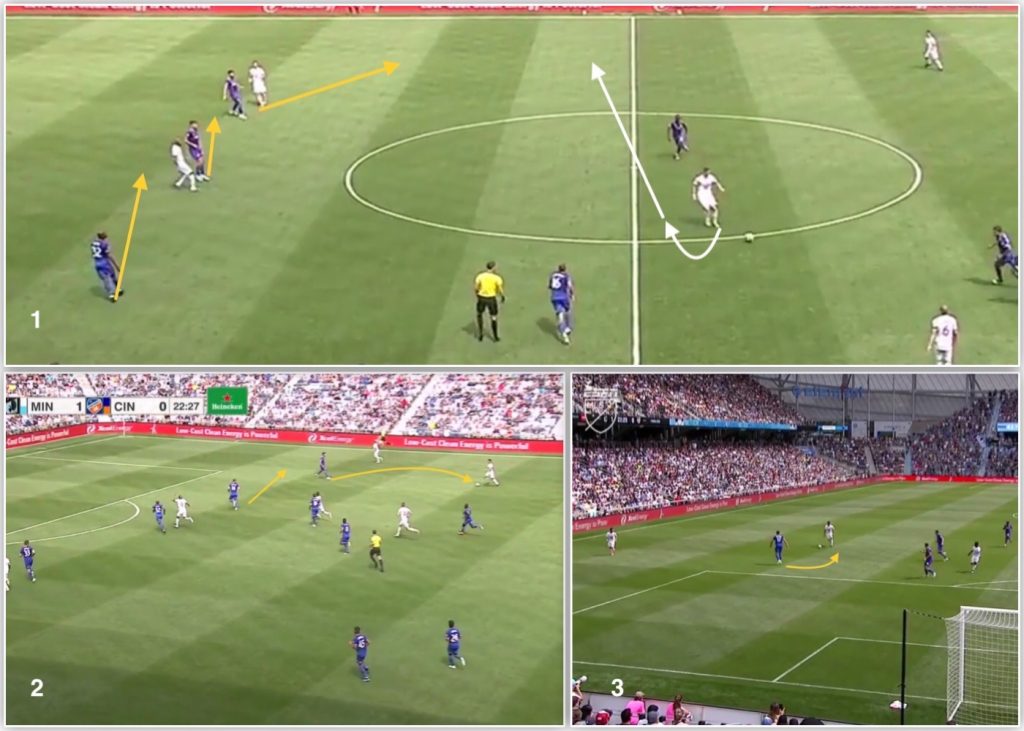 When the ball was played into the right channel (frame 1 above), Justin Hoyte, as the free defender, should have shifted left as he dropped, allowing Nick Hagglund to stretch wider and freeing up Mathieu Deplagne to apply pressure to the ball.

As Dotson neared the penalty area, Hoyte did finally pick up Hagglund’s runner (frame 2 above). However, Hagglund and Deplagne still failed to apply pressure to the ball when either could have stepped effectively. Then, once Dotson was in shooting range (frame 3 above), Deplagne continued to sag off of him, worried about the wide runner and failing to understand that the most dangerous player in the attack was the man with the ball.

A Maddening Turn of Events

Minnesota’s third goal arrived from a move that started with undisciplined positioning. As the FCC back line pushed forward, Hoyte should have been the deepest player with Hagglund was the ball side center back.

Starting position aside, Hagglund should have easily dealt with the looping long ball. Assuming that Hagglund would defend this simple ball, Hoyte and Caleb Stanko showed no urgency in their recover runs. In the time that Hagglund tracked the ball over approximately 20 yards, Hoyte and Stanko managed to retreat less than half that distance. So when Hagglund struggled with the clearance, they were so far removed from the play they couldn’t come to his aid. Finally, as Darwin Quintero rounded Spencer Richey, Hoyte dropped directly into the net instead of looking to pick up the dangerous Minnesota runners in the box, allowing an easy cutback and tap in for the home side.

The closer that the opponent gets to your goal, the tighter that you need to mark him. Therefore, once an opponent is inside your box, if you can’t reach out and touch him you are not close enough to prevent him from scoring. Coaches call this getting “touch tight.”

Defenders not getting touch tight was an issue in most of the goals scored against FCC on Saturday, including those illustrated above. Perhaps the best example of this came in Minnesota’s final tally of the night. 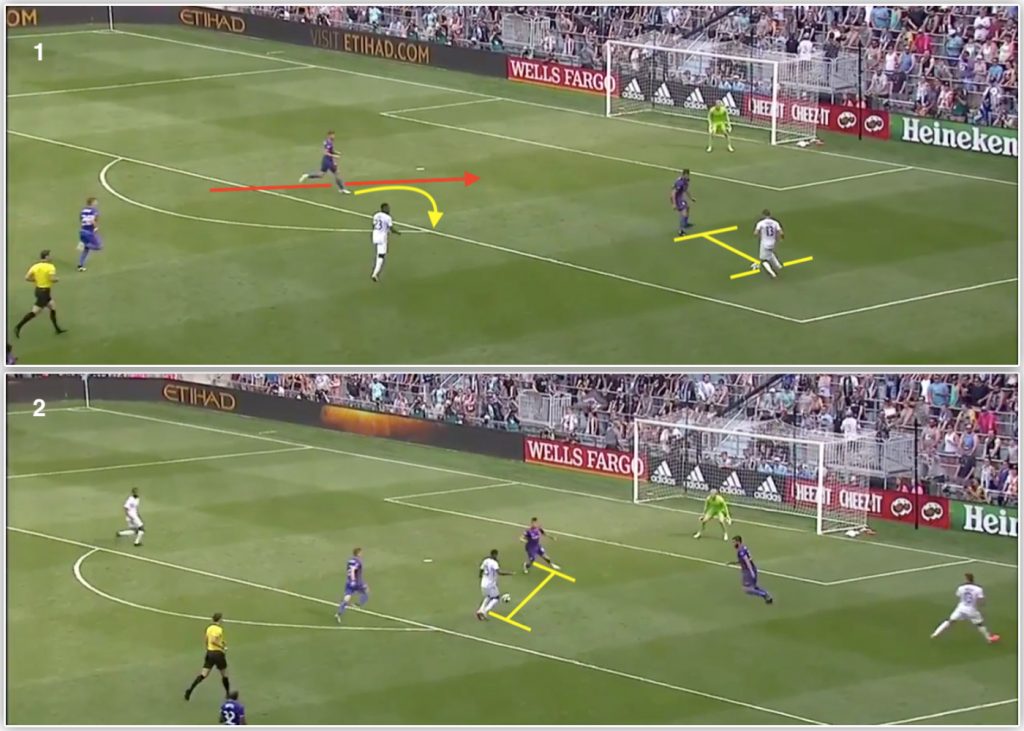 As Ethan Finlay dribbled into the FCC penalty area, Forrest Lasso was well positioned to defend him. However, he continued to back off, perhaps worried about Finlay’s pace. Not wanting to get beat 1v1 is understandable, but Lasso was so far away from Finlay that the speedy winger had his choice of going for goal or looking to pass. Since Stanko followed Hoyte’s example from earlier in recovering straight towards the goal instead of picking up the onrushing attackers, the choice to pass was easy.

By the time that Mason Toye received the cutback from Finlay, Stanko was also too far from him to get touch tight. Toye slotted it easily to his left to the wide-open Kevin Molino for the simple finish.

The ever so slight Silver Lining

Lest we get bogged down in the negativity, let’s enjoy the fact that Emmanuel Ledesma scored his first MLS goal in this match, and it was a thing of beauty. A bit of clever movement and a first-time strike were the keys to his success. 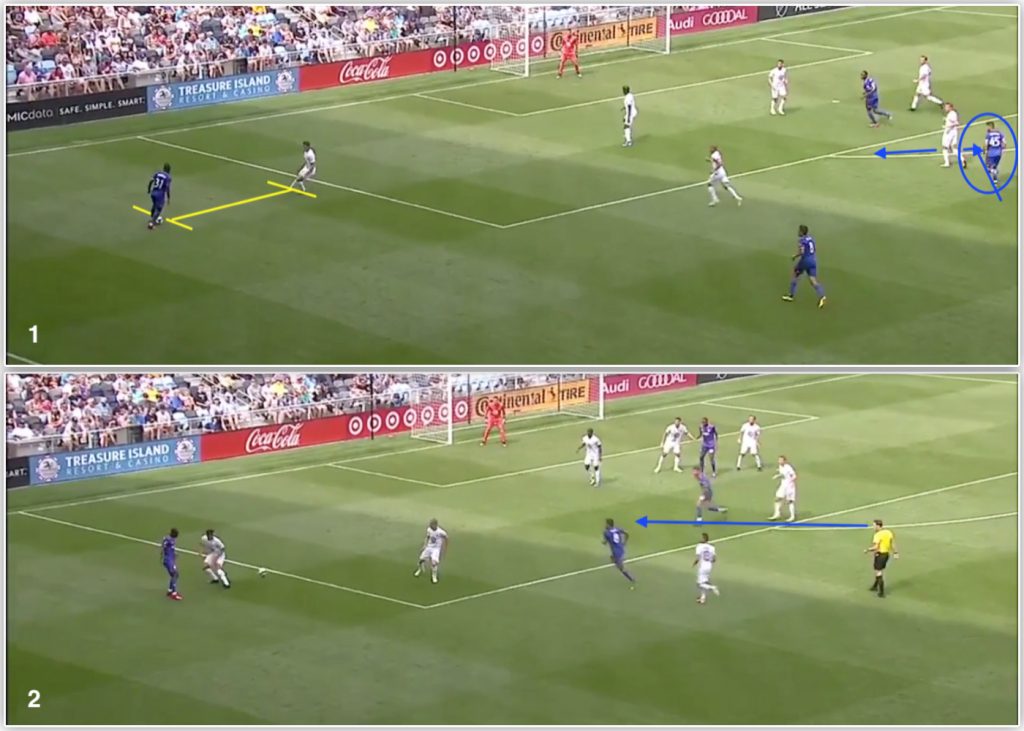 What made Ledesma’s goal so sweet was the way he set up his defender by running toward the center of the goal before cutting toward the near post (frame 1 above). Minnesota got caught giving Kekuta Manneh a bit too much space on the ball, allowing Ledesma to receive a cheeky little through ball from the winger. Then Ledesma had the wherewithal to strike the ball first time, catching Mannone and the rest of the Minnesota defense a little off guard.

Week after week I struggle in this column to find a positive note for FCC fans to cling to heading into the next match. All I have after this demoralizing defeat is the knowledge that the Orange and Blue will finally be getting some of the key players back. Leonardo Bertone will come off yellow card suspension for the match against Houston, and Kendall Waston and Allan Cruz will be catching flights back to the Queen City in short order. However, even with the influx of personnel, if the FCC players don’t start applying pressure to attackers as they come into scoring position, I’m afraid that there will be many more defeats on the horizon.