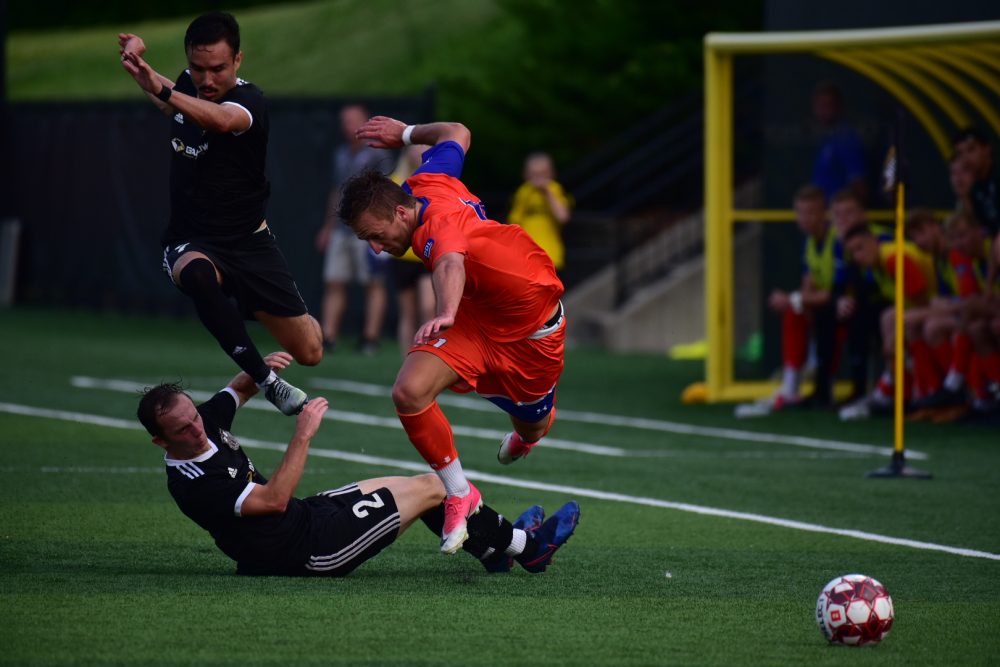 Cincinnati Dutch Lions head to West Virginia to battle the Alliance. The race to the division title is on

The Cincinnati Dutch Lions split two matches this past weekend and find themselves needing every victory to try and catch Chicago FC United.  Chicago came into Cincinnati’s back yard and put three goals on the board to beat CDLFC. On Sunday night, Cincinnati beat rival Dayton grabbing three back.

Sunday night, the Dutch Lions travel to West Virginia for a matchup after a nice week-long ‘break’ between matches.  The match is scheduled for a 7:30 start on Sunday, June 16th.

Impact of a Strong Midfield

The Dutch Lions have had some great play in the midfield in their victories this season. A midfield led by Jorge Guinovart and David Lozano has lead to strong results to date. This will be a crucial part of the Lion’s push toward a Great Lakes Division Championship. Cincy is at their best when they play a possession-based game.

The Alliance find themselves sitting at the bottom of the table with only one point so far this season.  Their only point coming from a 1-1 tie against Flint City that was shocking given the strength of the Bucks overall this season.  West Virginia is desperate to get their first win of 2019 and try to climb out of last place.

CDLFC has a loaded roster this season and Nicholson makes difficult decisions when it comes to who is in the 18 for each match.  Last Friday night against Chicago, Cincinnati put what was arguably their best lineup out on the pitch and couldn’t get the victory against United.

Head Coach, Paul Nicholson, and his staff have a number of very hard decisions to make heading into the West Virginia Match. The club needs every single point they can grab at this point to make a run at the division and with different players performing vs Dayton, it makes the choices difficult.

21-The total number of possible points that CDLFC have left on the table in front of them.

15- Possible points on the road

4- Number of goals scored by Alex Willis this season

Congratulations are in order for former CDLFC goalkeeper Zeus de la Paz.  Zeus has been called up to the Curaçao National Team from Oldham Athletic (England League Two) to participate in the Gold Cup.

The Dutch Lions two home matches left in 2019.  Friday, June 21st, 2019 against Dayton and Sunday, June 30th, 2019 against Flint City.  Keep an eye out on more information about #DutchSummer