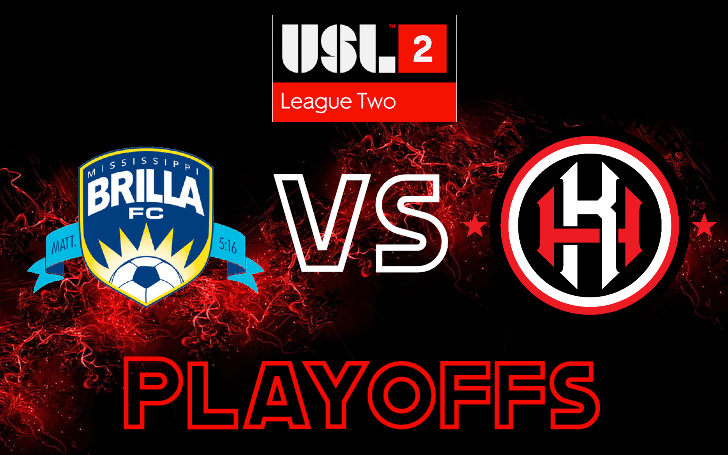 Kings Hammer, like most clubs, didn’t have a perfect regular season. However, they were able to clinch a playoff spot prior to the last match of the season.

Not many teams can say “we made the playoffs” in their first season in USL League Two. COVID-19 restrictions in California and Canada kept a number of teams from participating this season. That didn’t stop USL League 2 from putting together an expanded playoff structure.  Twenty-six teams will enter the playoffs with one goal, to become the USL League 2 Champion.

Kings Hammer, like most clubs, didn’t have a perfect regular season. However, they were able to clinch a playoff spot prior to the last match of the season.  That allowed them to rest a few players prior to the regular-season finale against South Bend Lions. A record of 8-2-4 was just enough to get them into the playoffs.  The 28 points put them two points ahead of Grand Rapids FC for the final playoff spot in the Great Lakes Division.

Mississippi Brilla FC had an 8-2-3 record dropping their final match of the season. That result was a 2-0 loss to Round Rock SC.   Brilla FC clinched the Mid-South Division early, and that final match had less to play for.

Brilla FC has three solid offensive threats on its roster. Ciro Damine has seven goals on the year. Jalen James and James Ndubueze both have five goals on the season.  Alejandro Chavarria will more than likely be the starting keeper for Brilla. In 900 minutes he has allowed a total of six goals according to the USL League Two website. Brilla has been around for fifteen years and played in the Semifinals in 2017.  They have also qualified for the U.S. Open Cup on four separate occasions.

Brilla FC will host Kings Hammer FC.  The match is being played at 8:30 p.m. eastern time.  Here is the link to the live stream.

What do the Kings of the Queen City need to do to advance?
It would be easy to say, score more than Brilla.  Sure, that’s the easy answer but, how do they get there.  Kings Hammer has four matches this season where they didn’t score a goal. Only once did they scored four goals.

Despite Kings Hammer having a very solid backline, Brilla is going to be hard to keep off of the scoreboard. If KHFC goes with their success 4 in the back, expected starters would be Quinn Thompson, Melker Anshelm, Karson Kendal, and Roberto Burlew.

KHFC needs to generate scoring chances early against Brilla FC.  Getting ahead early will give them an opportunity to hold possession with Lalas Ayerty and Kenney Walker in the midfield.  If they can draw some fouls in the offensive third, they will create even more chances to win the match. It is hard to find a better duo of set-piece specialists than Danny Barlow and Kenney Walker in USL League 2.

Kings Hammer has been a much better road team than they have been a home team this year.  Being in a hostile environment isn’t as big of a concern as it would be for most teams.  With it being an 8:30 p.m. Eastern start, the biggest concern would probably be the boys overdoing it during the day leading up to a late start.

A win against Mississippi Brilla FC would put them against the winner of Kalamazoo FC vs Corpus Christi FC. The opponent would be known just prior to the match. While Kings Hammer FC isn’t looking ahead to the next game, they’ve lost to K-Zoo both times they’ve faced them this season.  On one hand, they would love to knock them out of the playoffs but on the other hand, it would be a tough task. 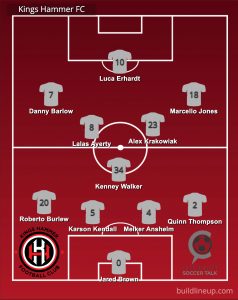