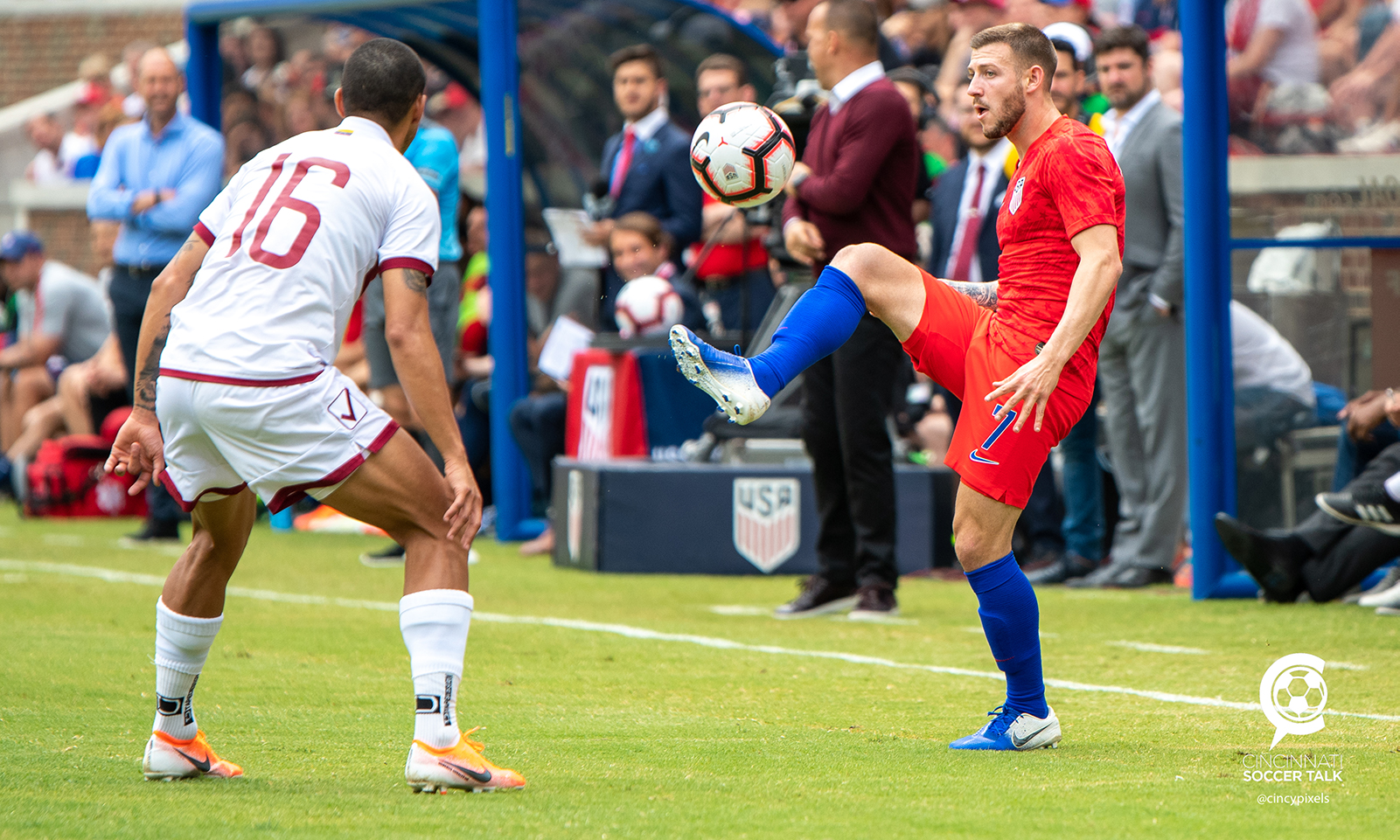 In its last tuneup before the Gold Cup, the United States men’s national team lost 3-0 Sunday to Venezuela at Nippert Stadium.

The United States men’s national team had its final Gold Cup tuneup Sunday at Nippert Stadium. If its performance against Venezuela is any indication, it could be a short stay in the tournament.

Riddled with mistakes and lacking a pulse in the first half, the USMNT coughed up three goals in 36 minutes en route to a 3-0 loss to Venezuela in its first appearance in Cincinnati. It was the second loss in four days for Gregg Berhalter’s squad, and Nippert fans soundly booed the team off the field at halftime.

“I think we need to be calm,” Berhalter said. “I think we need to look at the game, look at what we need to improve on and then set out to do it. It’s really tough after a result like this to come in and start making excuses. I don’t really want to do that, but what I’d say is we’re still getting guys where they need to be, and we’re not there yet. And that’s pretty clear. So we have to keep working on it.”

The U.S. played without midfielders Christian Pulisic and Michael Bradley, and forward Jose Altidore subbed in at halftime.

Things looked promising early for the U.S. Tyler Boyd, making his first appearance for the senior team, gave nice service on a couple of set pieces. Weston McKennie put his head on one in the seventh minute, but Venezuelan goalkeeper Wuilker Farinez made a highlight reel save to deny the goal.

“I thought he was lively,” Berhalter said of Boyd. “It’s what we had in mind. He has this verticality. He can stretch the defense and give good service into the penalty box.”

But then in the 16th minute, goalkeeper Zack Steffen kicked directly into a Venezuelan crowd, and Salomon Rondon banged home the turnover for a 1-0 lead.

“I didn’t really pick up my head to look to the left,” Steffen said. “Vision in my head was straightforward. I wanted somebody to come in the middle, and it wasn’t really on. I should have just played it to Aaron (Long). Unfortunately I gave it away. That’s the style we play, and it’s going to happen sometimes. We’ll learn from it and we’ll get better and we’ll be fine come Gold Cup time.”

In the 30th minute, Venezuela’s Jefferson Savarino hit the left post, collected the ricochet and slotted it home. In the 36th minute, Rondon played an over the top pass, beat Long one on one and put it past a flat-footed Steffen.

Berhalter said he was disappointed in the way his team responded.

“We talked about wanting to be more aggressive, wanting to get behind, wanting to get balls into their penalty box,” Berhalter said. “I think to a certain extent we did that really well. We gave up the goals, I didn’t love the response. The second thing would be I don’t feel after 90 minutes we competed on a level that we needed to compete on.”

The additions of Altidore to start the second half and Jordan Morris in the 62nd minute led to much-improved play. Altidore provided hold-up play, and Morris was a presence down the right flank. He had a part in rapid-fire chances in the 67th and 68th minutes, missing on wide left on a shot inside the box and service that was deflected to Paul Arriola who also missed to the left.

Sunday’s match marked the first USMNT appearance for Altidore since Trinidad and Tobago eliminated the squad from last year’s World Cup on Oct. 10, 2017.

“It’s what I’ve said all along about Jose — he has top quality,” Berhalter said. “You see his ability to combine with players and to really see passes and to hold the ball up. He’s a real quality striker. It would have been nice to get him a goal. He moved a lot of balls into the penalty box in the second half. It’s unfortunate he wasn’t on the end of one of those. But overall, it’s exciting to think about his quality coming back into the team.”