FC Cincinnati lost 5-2 to New York City FC on Thursday, but our tactics expert Brad Gough does find positives to draw from the match.

Another match, another FC Cincinnati loss. And this one was not just a defeat or another missed chance to add much-needed points to their tally. This defeat was a 5-2 drubbing by New York City FC in which the Orange and Blue never looked like staying competitive.

So, here’s my hot take: FCC didn’t look that bad. In fact, I’m bullishly positive on the improvements that the squad is making under interim manager Yoann Damet. The team created 15 shots and two big chances. Sure both of the goals in their column were the result of NYCFC players deflecting balls into their own net. Sure, they gave up 20 shots to the opposition. However, they were without four starters, and I maintain that I’d rather lose these matches trying to implement a playing style that will serve the team for years to come rather than bunker back, limit chances, and create little going forward in hopes of backing into a result.

All of that said, FCC still gave up five goals. Each goal was a systematic breakdown of several players failing to make a play or take up the right position. However, in the interest of your time and mine, I chose to focus on what I thought was the biggest issue for each defensive let down.

Kevin McCloskey commented after Alexandru Mitrita opened the scoring about how much space he had for the tap in. He came into that space by running right past three FCC players. Ultimately, Caleb Stanko was charged with the defensive midfield responsibilities, and you can see in the image below (circled in red) that he pulled up and did not continue to track Mitrita into the box. 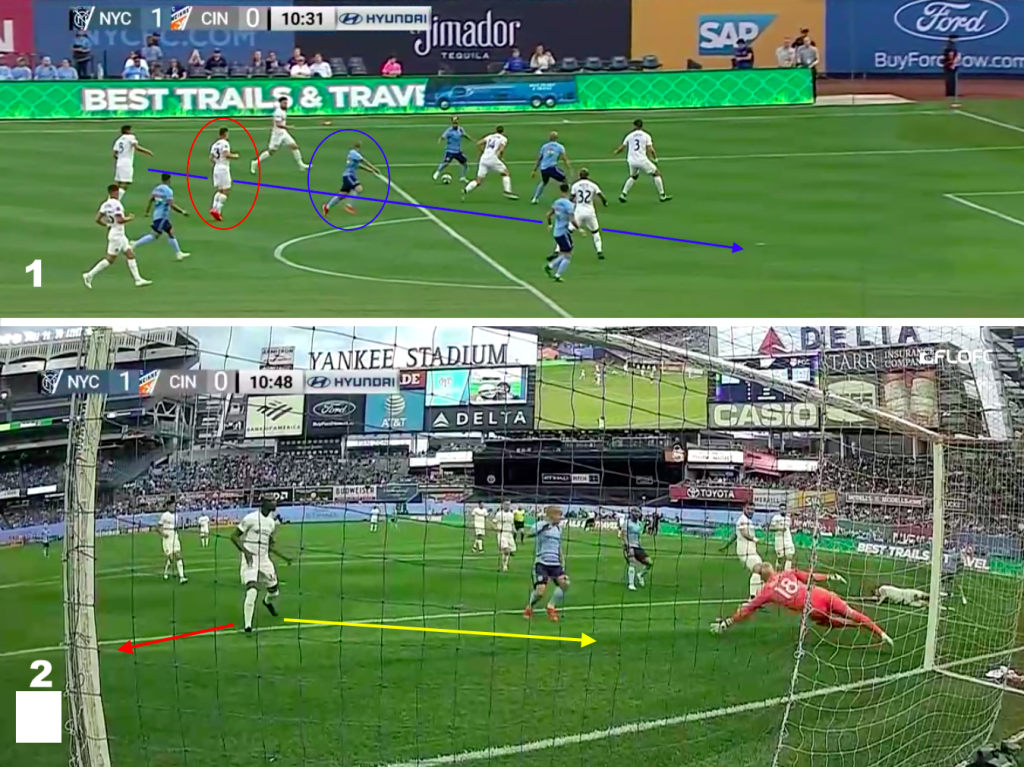 This doesn’t tell the whole story though. Justin Hoyte didn’t pinch to cover Mitrita’s run, electing instead to maintain his position to cut off the angle of the NYCFC attacker at the back post. The goal cam image above shows just how much distance there was between Hoyte, Mitrita and the mystery attacker at the back post that isn’t even in the frame. Hoyte should have picked up Mitrita, but if Stanko did his job he wouldn’t have had to.

Wingers Have to Defend Too

Anton Tinnerholm gave the FCC defense a lot to think about as he constantly bombed up the sideline, providing dangerous width for the NYCFC attack and finished the match with two assists. In any system of play, every player on the pitch has defensive responsibilities. When playing with wingers, their responsibility is to track the opposition’s outside backs. 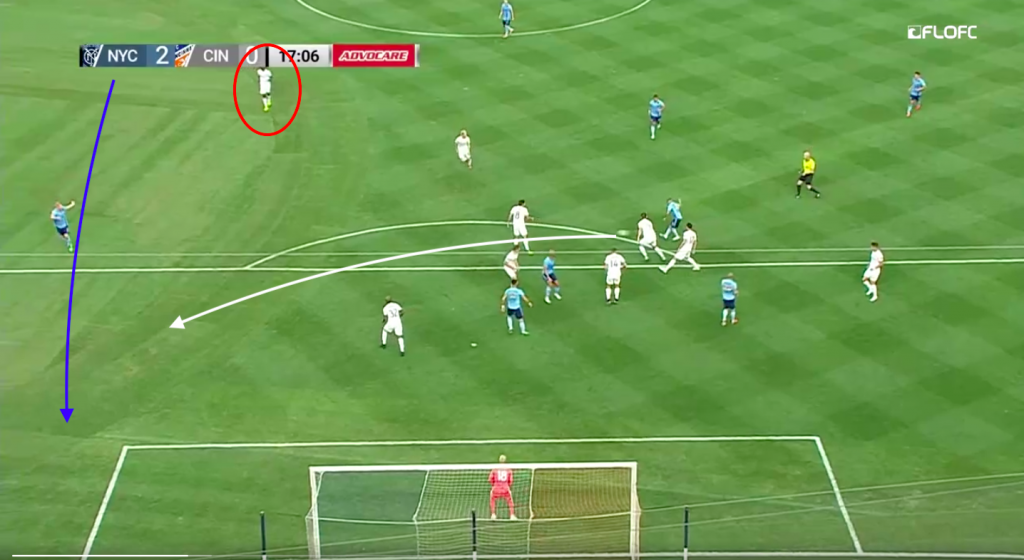 Surprisingly,  the image above is actually generous to Roland Lamah. Go back and watch the lead up to this goal. Tinnerholm began his run forward for NYCFC’s second goal of the match from 10 yards inside his own half, and Lamah never considered trying to keep up with him until it was much too late.

Lest We Think it was Just Lamah

Lamah wasn’t the only FCC winger shirking his defensive duties. Tinnerholm’s second assist on the night came from a similar play where he ran from deep, right by an FCC winger (this time Emmanuel Ledesma), and ended up deep in the FCC defensive third with time and space to pick a perfect pass. 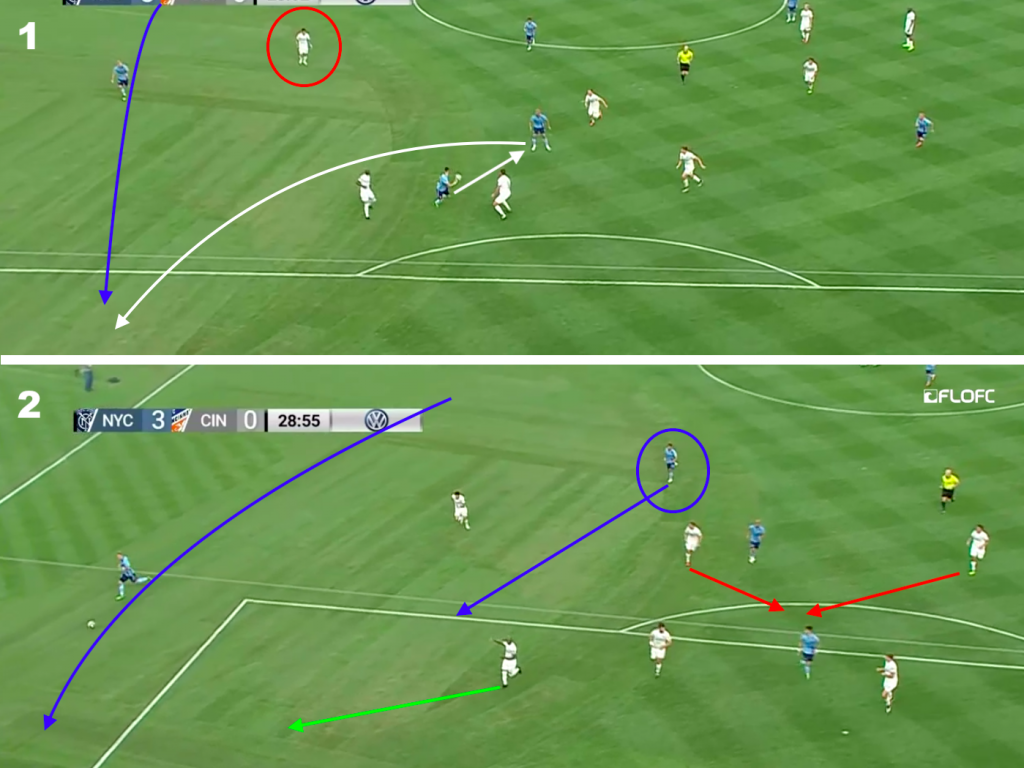 Ledesma’s failure to track doesn’t tell the whole story here, as Stanko and Victor Ulloa both crashed centrally when Stanko would have been better served to take a look and notice Ismael Tajouri-Shradi running free to the top of the box to provide the perfect cutback for Tinnerholm.

Héber’s goal in the 37th minute was purely embarrassing for the entire FCC team. Héber had gotten caught well behind the play and made an extremely late and speculative run to get forward. 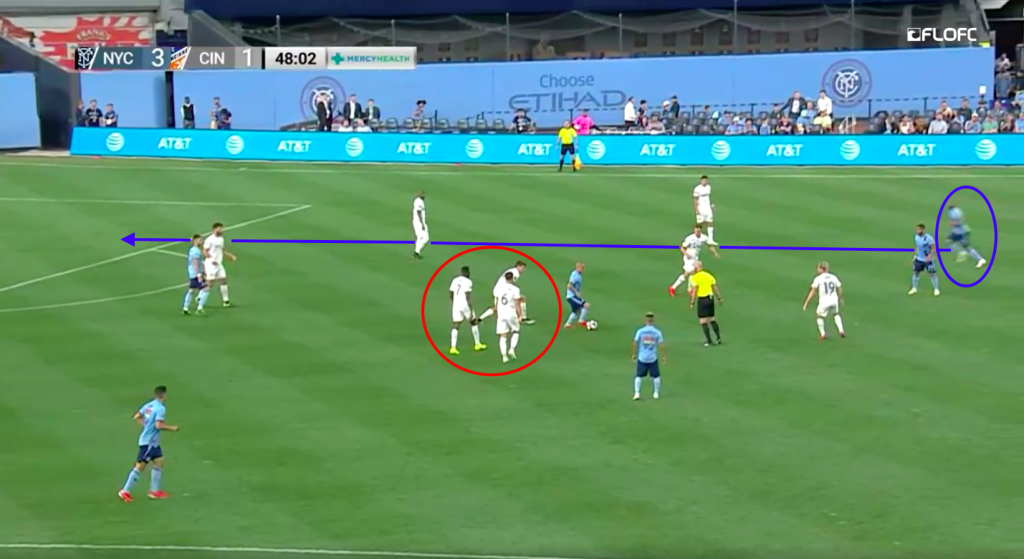 As Nick Hagglund, Leonardo Bertone and Lamah drew straws to decide who would try to win the ball back, Héber ran right by the entire FCC defense. When Maxi Moralez received the ball, Bertone elected not to pressure, allowing him all the time he needed to float a nice little pass into the Brazilian as he waltzed into the box unopposed.

Now This Goal was Pretty… but Still Preventable

The final NYCFC tally was a thing of beauty. Intricate passing within a tight area right inside the FCC penalty box finished off by a curling Moralez effort to the back post. 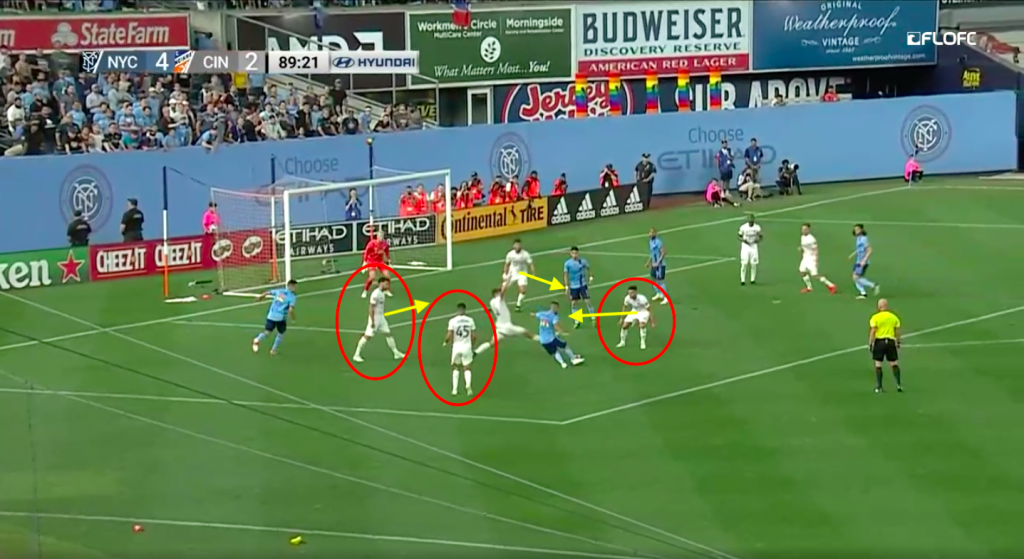 To be honest, there wasn’t one huge error that allowed this goal. It’s tough to see the image above, however, and not think Mathieu Deplagne and Ledesma look disinterested in the play. Forrest Lasso should have been a bit tighter to the NYCFC forward that exchanged touches with Moralez, and Bertone should have continued to drop in to help the back line, but overall Moralez created this goal and it was well deserved.

But Didn’t I Say I was Bullishly Positive?

As a matter of fact, I did. Though FCC’s passing accuracy and passes completed dropped to pre-Damet numbers, I thought the team played alright. Lamah is looking like the real deal (three shots, 2-for-2 take-ons, three fouls drawn), Corben Bone didn’t look out of place linking the midfield with the attack (85.7% passing, two chances created, 1-for-1 take-ons), and own goals or not, FCC didn’t get shut out.

Fanendo Adi needs to improve, and not just by scoring goals. He needs to provide better hold-up play when receiving the ball in transition. Deplagne was possibly FCC’s MVP heading into this losing run, and he has not looked himself. Finally, Stanko is playing well on the ball but needs to fine-tune his defensive positioning if he is going to be the answer at defensive mid.

The international break couldn’t have come at a better time for these players to get themselves right. Until then, I choose to believe that they’re heading in the right direction.