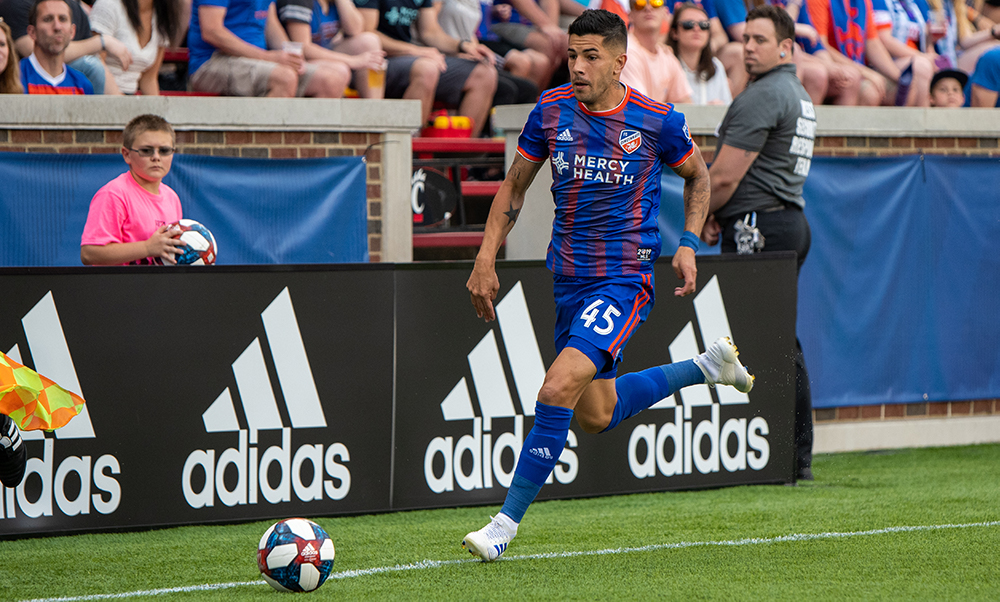 FC Cincinnati entered the hallowed grounds of Yankee Stadium Wednesday night but the New York City FC was too much to handle led by Maxi Moralez and Heber Araujo dos Santos.

FC Cincinnati entered the hallowed grounds of Yankee Stadium Wednesday night but the New York City Football Club was too much to handle led by Maxi Moralez and Heber Araujo dos Santos. The Pigeons put five in Spencer Richey’s net and two in their own. FC Cincinnati slumps to their fourth consecutive defeat and has lost nine of 10.

You have to feel for Richey. NYCFC had 20 shots on the night with 9 on goal. With an unorganized back line, he was left exposed all evening and was a sitting duck for the five NYCFC goals. It’s not as if he was giving up easy chances. He made several point-blank stops, but the Pigeons were ruthless in front of goal.

Hoyte has done everything asked of him this year but to shepherd another slapstick backline was a step too far. The backline looked like swiss cheese, and with Hoyte out wide, he was unable to get them organized. With Forrest Lasso and Nick Hagglund frequently out of position, Hoyte was left to cover multiple runners leading to several goals for NYCFC.

Lasso made his first appearance since May 5 in San Jose, and it was not a pretty night for the center back. Like Hagglund, Lasso had a rough night filled with indecision. He was frequently caught ahead out of position leaving a lot of space for NYCFC to attack. Hagglund and Lasso couldn’t get on the same page, but credit to Lasso that he stayed with it all match and was trying to organize what he could of the defense until the final whistle.

I had higher expectations from Hagglund heading into the evening and was thoroughly disappointed. Hagglund couldn’t rally the defense, and he found himself on the wrong side of the ball all night. He tried to get forward into the midfield to disrupt the attack but more often than not was picked apart NYCFC. Hagglund has to know better with his experience that he can’t keep getting caught out of position. Through 16 matches, it’s looking like FC Cincinnati will need to supplement its center back core if it wants to salvage the second half of the season.

Like the rest of the back line, Deplagne was a step slow for the night. He was often late into challenges and showed his frustration with his 83rd-minute yellow card. If I could pick out some positives it was with his distribution (79%) and his relationship with Roland Lamah. They were able to find success up the right to get into the attacking third. Like Hoyte, a lot has been asked of Deplagne switching sides week in and out, and it looks like the constant changing is getting to the Frenchman.

Stanko could not handle the intricate passing of NYCFC and couldn’t disrupt play in front of the center backs. With Victor Ulloa playing slightly ahead of him in the first half, Stanko couldn’t stem the tide. When Leonardo Bertone came in at the half and slid next to Stanko, the duo was finally able to clean up some of the play in front of the back line, but overall it was too little, too late.

Victor Ulloa was largely ineffective with 55% passing and was pulled at halftime by Yoann Damet. Not sure if the change was due to injury, but the midfielder was largely invisible and completed only two passes in the opposing half.

He was one of the few bright spots for FC Cincinnati. Bone played in an advanced midfield role and had an impact in the fifth minute. He threaded a perfect pass to a streaking Lamah that put the winger 1v1 on NYCFC goalkeeper Brad Stuver. On the night he was effective getting forward, created two chances and had an 85.7% passing percentage.

Ledesma started to find his offensive boots, creating four chances on the evening. While he was ineffective in the build-up with 9 of 17 in passing, he was looking to feed the final ball into Fanendo Adi. Ledesma hit several strong crosses, but the big body forward was unable to put the chances into the net.

Made a great run in the aforementioned interchange with Bone, but Stuver made a great save. Substituted out in the 59th minute with a hamstring injury. While he didn’t create any chances, he again got into the attack and looked dangerous at times.

The FC Cincinnati forward hasn’t scored a goal in 249 days (Sept. 30, 2018). He had several opportunities in the first half but couldn’t put the ball on frame. With little space between the NYCFC center backs, Adi again found it hard to get on the ball without dropping back into the midfield. Frustration has clearly come to a head for Adi, and the Gold Cup break might come at the right time to refresh the forward for the second half of the season.

Bertone came on at half for his first appearance since the May 11 win over Montreal. He played deeper than Ulloa and was able to get on the ball a more to stabilize the match. His pass set up Frankie Amaya’s chance that led to the second goal for FC Cincinnati. His return from injury will be key to help FC Cincinnati’s defense get their feet back under them.

Subbed in for Bone and helped FC Cincinnati get on the scoresheet in the 76th minute. The small midfielder took advantage of an NYCFC dispossession and took the shot on goal. Stuver made the save, but the rebound bounced off a NYCFC defender and into the goal. Amaya started on the bench to help keep him fresh for the long season, but again the 18-year-old showed he’s one of FC Cincinnati’s most important players.

Manneh came in for an injured Roland Lamah and was active up the left side. I like that during his short time, he created two chances and sent several probing balls into the box. Now with Ramadan over, Manneh can return to full fitness and help turn FC Cincinnati around for the second half of the season.

Damet was put behind the eightball with injuries and players out on national team duty, but at some point FC Cincinnati needs to start showing some defensive structure. I will admit that I got too high and confident after the Montreal win, and now we have to question if trying to hold so much possession is the wrong strategy for the club.