It is clear that Yoann Damet made some changes in the little time that he had to prepare for the match against the Montreal Impact. It seems that those changes will continue.

Yoann Damet had roughly three days of training after becoming an interim head coach to prepare for last Saturday’s matchup with the Montreal Impact. Despite this, the FC Cincinnati team played with a few notable tactical differences. Was this was a specific plan for the Impact or a sign of things to come? The fact that Damet had a plan and that the players executed said plan is already a vast improvement over the Alan Koch era.

Justin Hoyte as a Center Back?

Eyebrows were raised, and some were furrowed, when the starting lineup was announced with Justin Hoyte as a center back in a 4-2-3-1. This was our first big clue as to how Yoann Damet was going to ask his team to play. Hagglund, Waston, and Lasso have all performed admirably at center back this year. So, why the change? Not taking anything away from the trio, but none of them would be named amongst the ranks of defenders known for their abilities to pass and maintain possession. If FCC wants to possess out of the back, they need at least one center back that is confident in this aspect. Is Hoyte that man? Well, his addition on Saturday certainly helped. The graphic below outlines the top players in a number of passing combinations from Saturday and Cincy’s last home match against Real Salt Lake. We’ll have to wait and see if Hoyte and company can continue this trend going forward. 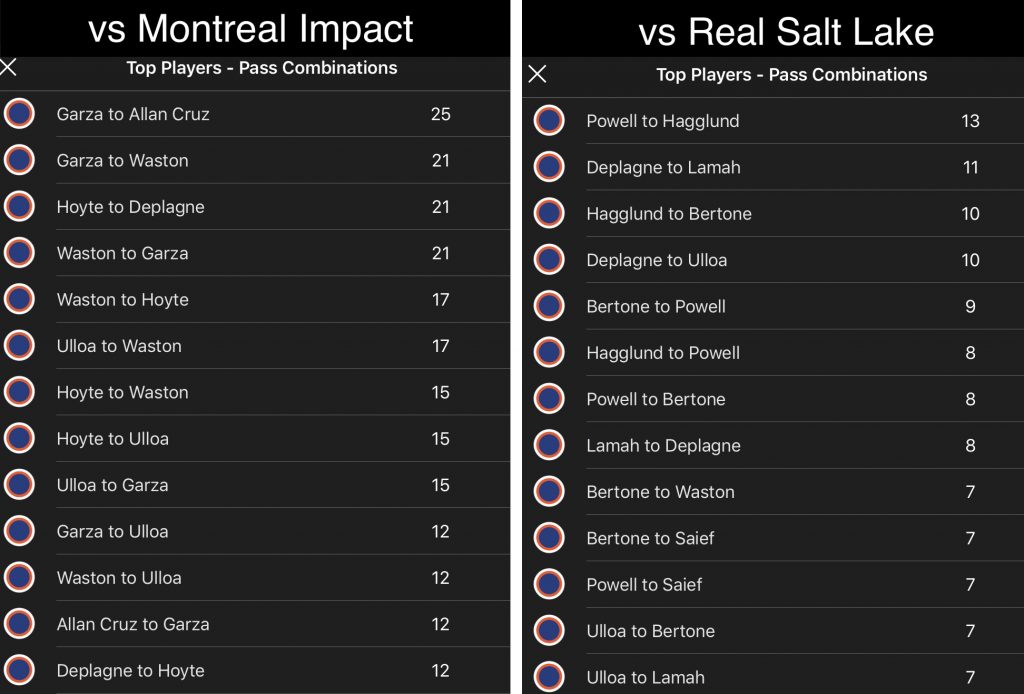 Well, yes… and no. As much that has been made of Damet’s choice to start Hoyte at center back, his role when FCC had possession was not atypical of what we occasionally saw from him in the USL. On Saturday, Hoyte was in a hybrid center back role where he defended as a traditional center back in a 4-2-3-1, with Victor Ulloa and Leonardo Bertone in front of him in a double pivot when the Impact had possession. In possession, Hoyte moved to a right center back role in a 3-4-3 with Bertone pushing forward and Ulloa acting as a single pivot. This sort of formational shift in and out of possession is not without precedent. In fact, Greg Berhalter employs the same tactic with the U.S. Men’s National Team.

The image below shows how, in certain possessions, Hoyte shifted wide to the right while Mathieu Deplagne made runs up the field. Greg Garza stayed home in his defensive position, effectively forming a back 3. Frankie Amaya, Victor Ulloa, and Leonardo Bertone (shown slightly out of position here) shifted to form a midfield 4 with Deplagne (circled). 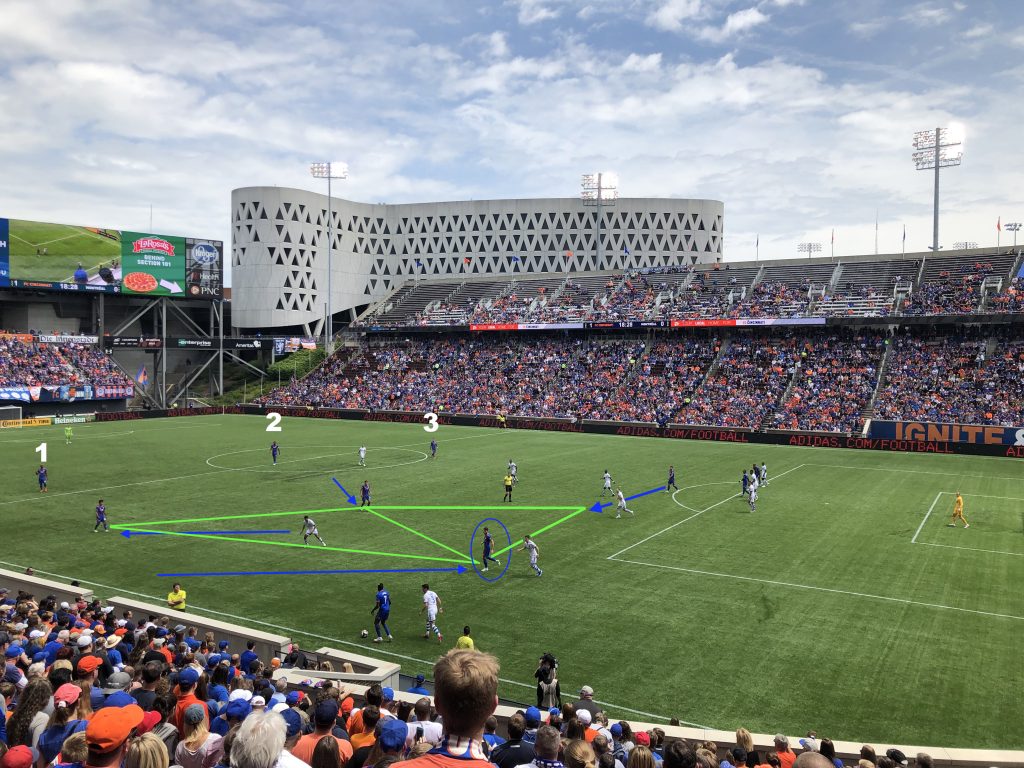 In other possessions such as that pictured below, Hoyte shifted centrally with Waston and Deplagne to either side, with Garza pushing into the midfield. Thus, though FCC defended in a 4-2-3-1, they attacked in a 3-4-3. 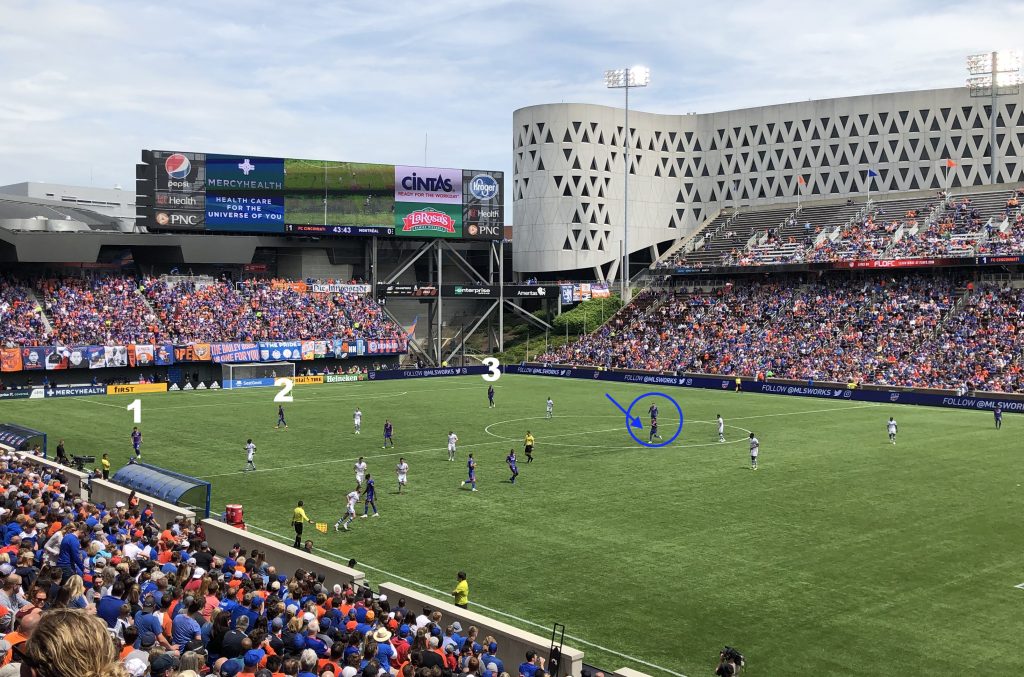 And Then the Passing!

Much has been made about the number of passes completed by the FC Cincinnati team. In fact, their 403 passes registered in the first half on Sunday were more than their season average for passes per 90 minutes. Not only did the Orange and Blue string together long series of passes, but they also kept it simple. Passes were relatively short, played into players that were moving into space with a purpose. This created easy passing opportunities, cut down on turnovers, and when the time was right, allowed FCC to go forward and create imbalances in the defense. As I stated in my Key Moments piece from Monday, the build-up to both of the FCC goals (pictured below) involved lots of passes, started from the back line and moved forward, and exploited varying areas of the field — all without a single long ball. 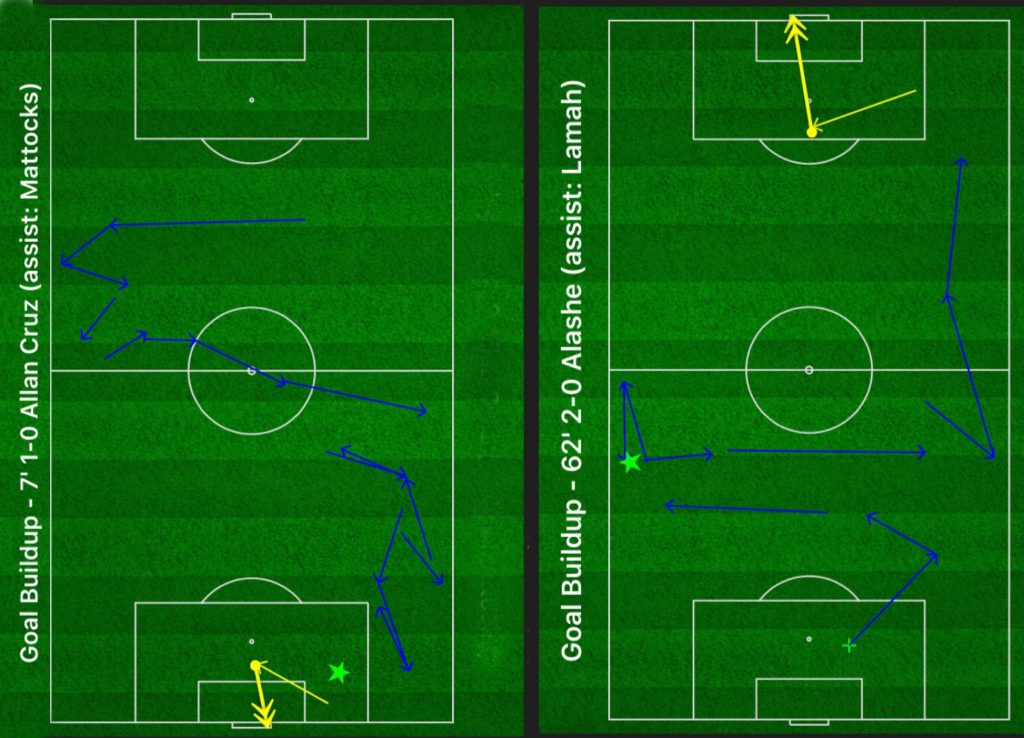 Contrast that with the build-up play to every other goal from open play that FCC has scored this season (below). You can see the stark difference in a team that looks to pass their way out of pressure with short and simple passes rather than win the ball high up the field, beat defenders 1v1, and wait for opportunities to present themselves rather than creating them. 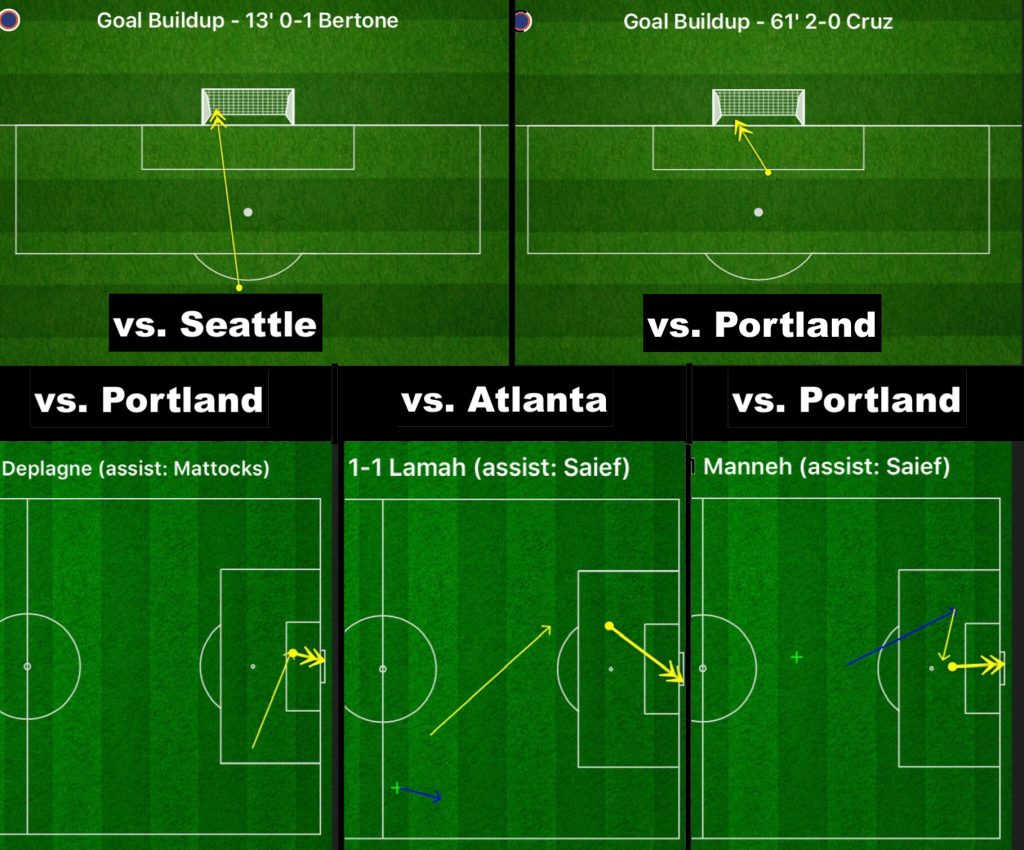 It is clear that Yoann Damet made some changes in the little time that he had to prepare for the match against the Montreal Impact. It seems that those changes will continue. Whether there are more to come, tactically or in personnel, we’ll just have to wait to see. Sunday as FCC travels to play Orlando City SC will be another test.