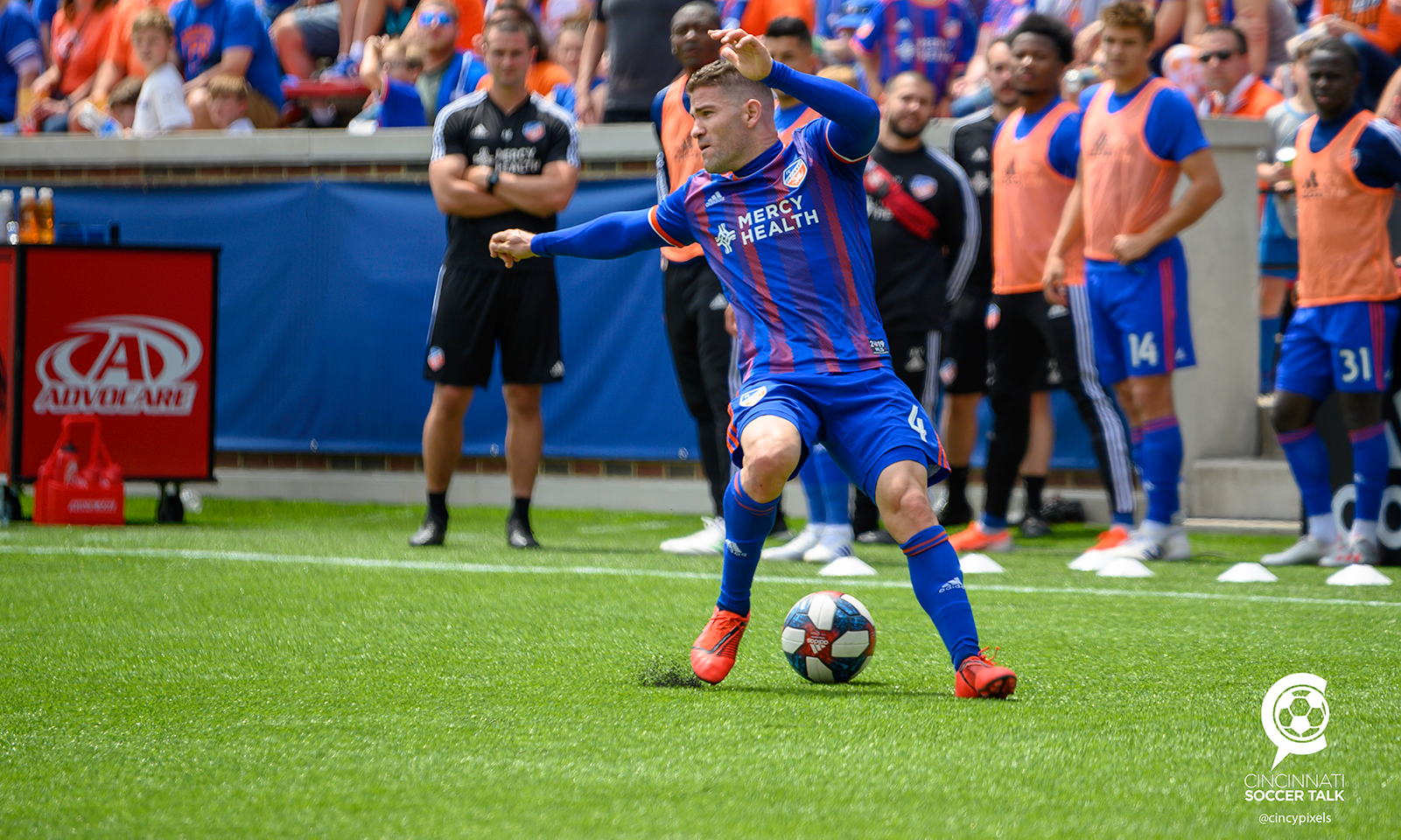 Watching FC Cincinnati’s winless streak was hard for Greg Garza while injured, but the veteran defender’s leadership will be felt on and off the pitch now that he’s healthy again.

MILFORD – With the losses mounting and FC Cincinnati’s inaugural season in MLS spiraling downward, one of the club’s veteran leaders was absent from the team and feeling powerless to help.

“It was very difficult to be away from things and not knowing what the culture was within the group,” said defender Greg Garza.

In the wake of Koch’s ouster, it was time for Garza to get back to work. Not just training again and getting himself reacclimated into the backline, but returning to his leadership role on the team, which for him doesn’t take the form of busted white boards or Rockne-like speeches.

Positive energy is exactly what this team needed last week after firing its coach just 11 matches into the franchise’s first season of existence had some questioning the club’s direction.

Assistant coach Yoann Damet was brought in to help stem the tide while FCC searched for a permanent replacement. Damet is popular among players and staff, but at 29 years old he’s also the youngest head coach in MLS history.

Regardless of how long Damet is at the helm, Garza said the club can’t succeed if the players don’t share a belief and trust in his system, a lack of which might have been a factor in Koch’s firing.

That belief and trust were evident during Saturday’s 2-1 win over the Montreal Impact at Nippert Stadium when FCC’s free-flowing system under Damet produced 571 passes with an 83% completion rate. The hosts held a 55% possession advantage.

“I think the ideas that were implemented from Yoann and his staff in a very short amount of time helped us make a step in a positive direction,” Garza said. “We were able to think positive and turn the page as quickly as possible. To turn around and get a win right after that is something to build off from. We have to think forward now, forget everything’s that happened and look forward.”

To do that, FCC needs Garza on the pitch. His injury history since coming to FCC dates back to preseason when a quad strain forced him to leave training early from the U.S. men’s national team. The injury lingered, forcing him to miss FCC’s inaugural MLS opener in Seattle. He has played in half of FCC’s first 12 matches, including four starts.

“It’s great to have him back,” Justin Hoyte said. “We missed him for a while. You could see him on the field (Saturday), talking and communicating. His experience is fantastic to have and something we need in our team moving forward.”

Amid all the talk the past few weeks about Koch’s tactics and an erosion of culture on the club, it’s also important to note that Garza was conspicuously absent for the entirety of the five-match losing streak and what a difference he can make now that he’s back.

Along with Kendall Waston, Garza brings a presence to the pitch. But the Grapevine, Texas, native doesn’t aim to intimidate anyone. His work rate in matches and the fact that he was an important component in Atlanta United’s MLS Cup run last season says all you need to know about Garza.

Now that he’s back, FCC needs him healthy and on the pitch, in training and in the dressing room, wherever he can make an impact.

“I have that American warrior mentality, after coming back from a few injuries,” Garza said. “For me, it’s all or nothing. You play the way you train. We just have to have belief and faith in what Yoann and his staff is trying to do. Just bleed for the crest, right?”