Anticipation was thick as Yoann Damet took charge of FC Cincinnati for the first time on Saturday against the Montreal Impact. FCC fans held their collective breaths hoping to see any semblance of a plan to improve on the seven-match winless run that saw the team outscored by a total of 12-1, and in the midst of enduring a streak of over 520 minutes without scoring a goal.

Well, exhale. The 2-1 victory was a marked improvement. So did anything change other than the team’s fortunes? A look at some key moments from the match gives us insight into the answer.

The Drought Has Ended

The total time that FCC had failed to score a single goal reached 527 minutes when Allan Cruz scuffed his shot just under the bar to give his team the 1-0 lead. The build-up to the goal involved 16 passes and moved from the edge of the defensive third of the field all the way forward and from the right side all the way to the left side — all without a single pass traveling more than 15 yards. This simple, straightforward possession appeared to be a major emphasis of the team under Damet.

The goal that was scored was far from perfect execution, but you can see below that the players had some semblance of an idea of what they needed to do, which made all the difference in the opportunity. 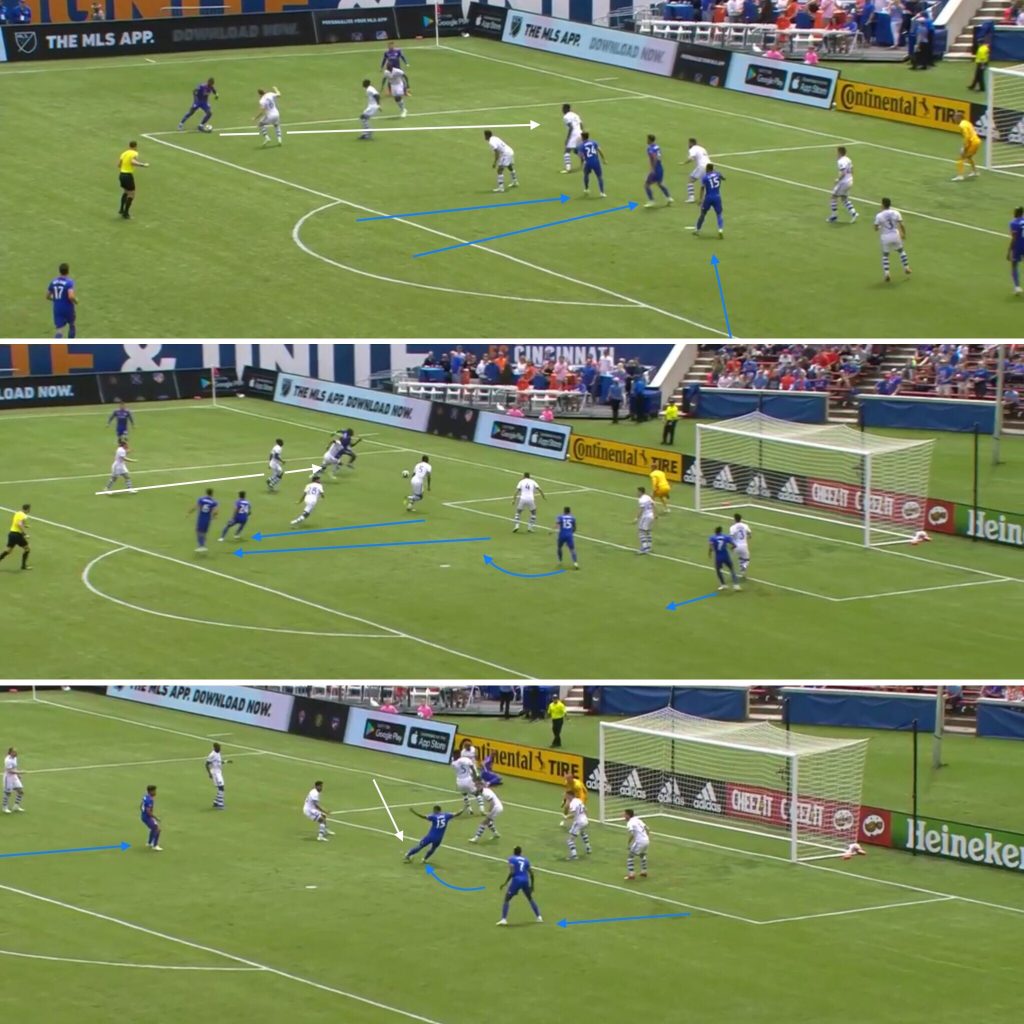 As Darren Mattocks turned to take on the Impact defense, Frankie Amaya, Leonardo Bertone and Allan Cruz all made incisive runs into the box. The runs certainly could have been more dynamic, but making the decision to make an acute run is the first step. The chance didn’t materialize immediately. In games prior we would have seen the FCC attackers waiting in the box to see what Mattocks could come up with, but Saturday both Amaya and Bertone sprinted away from the goal. Amaya and Bertone were being closely marked by Zakaria Diallo and Rudy Camacho, the Impact center backs, as they first darted into the box. Then when they ran away from the goal Diallo and Camacho assumed they weren’t a threat and focused in on the ball. However, Cruz made a clever run into the space that Amaya and Bertone had vacated and was unmarked for the Mattocks cut back.

Amaya and Bertone’s runs were far from perfect, and having both of them vacate the box is probably not ideal. However, as the old coaching adage goes: it’s better for players to be all on the wrong page together than to have only a few on the right page.

If one is good, two is better

Another long passing sequence — this one 11 passes — another goal. Once again the FC Cincinnati team patiently built an attack from back to front that relied on quick and decisive passes rather than brilliant vision or individual prowess. And once again the FCC goal was a product of quick, incisive movement in and around the box. 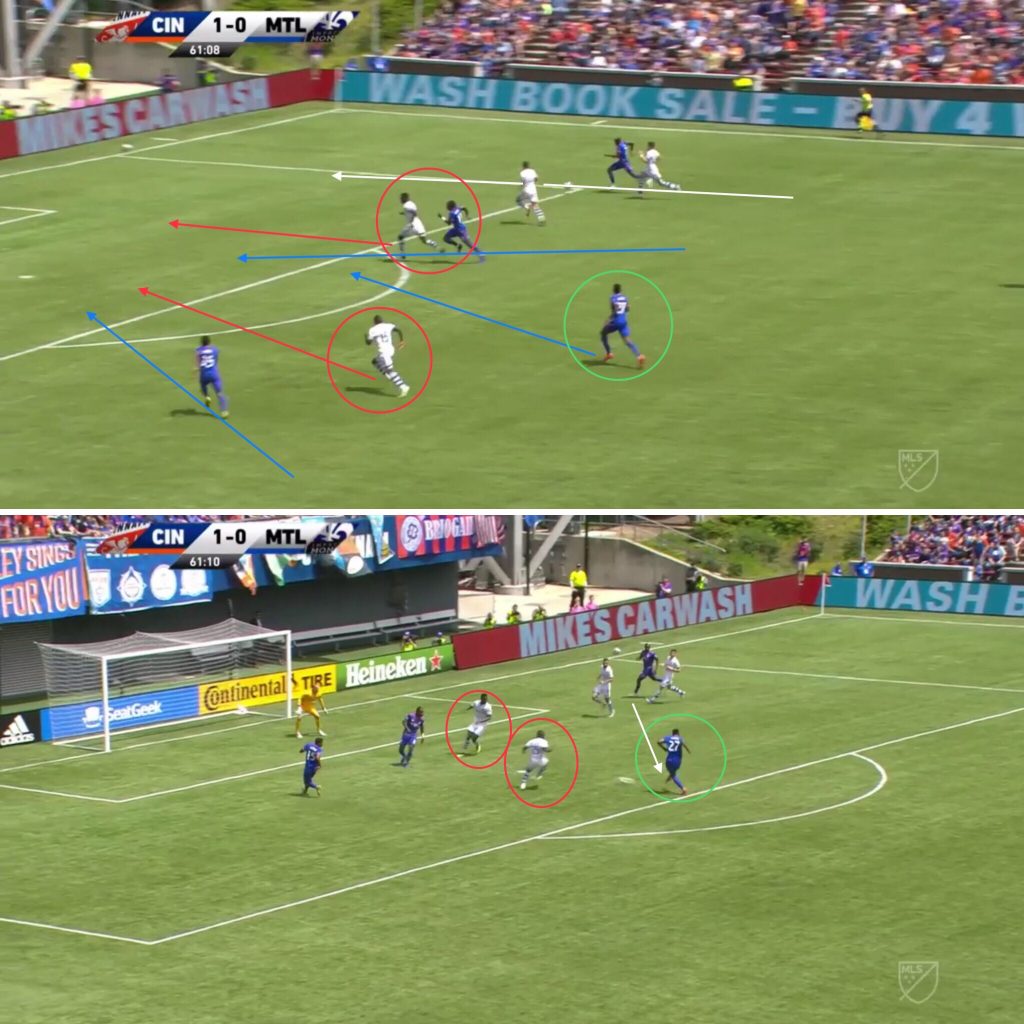 The image above shows the movement involved in Fatai Alashe’s 62nd-minute strike. Mattocks and Cruz both broke into the box as Roland Lamah turned on the jets to get in behind the Impact defense. Both players were well tracked as they made their runs, but their incisiveness left a gaping hole at the top of the box for Alashe to get on the Lamah cutback and cooly finish into the lefthand corner of Montreal’s goal. The three basic runs needed as any player looks to cross from the goal line are near post, far post and a delayed run toward the penalty spot. What the FCC attack did for the second goal was basic, and sometimes that’s all you need.

But oh, the individual errors

Of course, Damet’s debut as coach couldn’t be all roses. However, he can rest assured that the goal that his team conceded was not due to tactical ineptitude, but individual error. 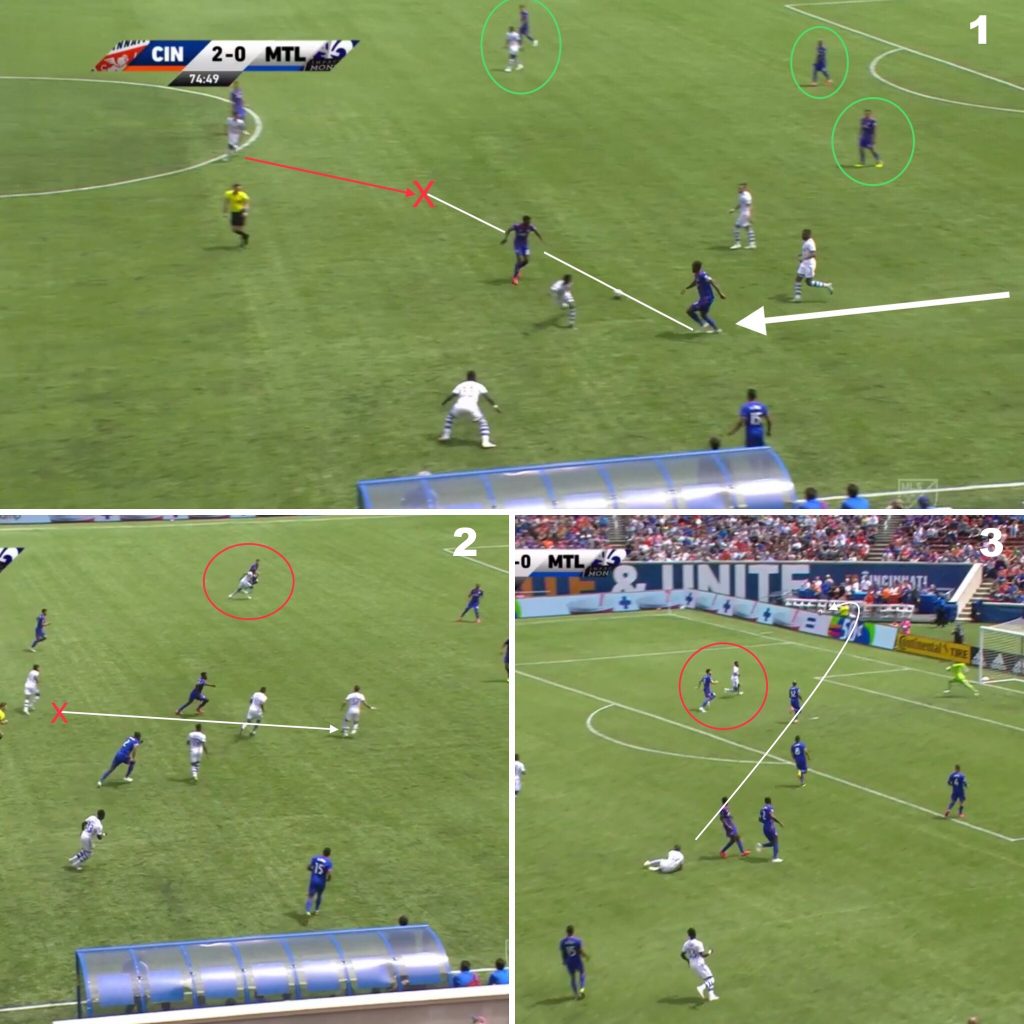 Up 2-0, Kendall Waston probably shouldn’t be dribbling the ball out of his own defensive third. But even within that the team was pretty well set up to cover for his turnover (frame 1 above), with Justin Hoyte in position, Mathieu Deplagne not too far forward and Victor Ulloa dropped in behind Waston for cover. However as Waston misplaced his pass and Montreal’s Samuel Piette found Maximiliano Urruti with the line-splitting ball (2), Deplagne simply gets outrun by Orji Okwonkwo who easily nodded the ball home off of Urruti’s lofted ball in behind the FCC defense.

Short, quick and simple passes were the order of the day for FC Cincinnati, and that allowed them to move the ball at will around the Montreal defensive block to create offensive opportunities. Couple that with players that seemed to have a new idea of what kinds of runs to make when their teammates are looking to drive the ball to the end-line, and you have a few small changes that made a big difference in the final result of the match.

Look for another “Talking Tactics” piece from me later in the week breaking down the more nuanced tactical changes that the Orange and Blue showed in Damet’s first match in charge. Even these simple changes were enough to let the FCC faithful breathe a little as we await next weekend’s trip to Orlando.