Should FC Cincinnati use a single pivot or a double pivot? What exactly is a pivot? This Talking Tactics installment discusses both.

In my tactical breakdown of FC Cincinnati’s April 13 defeat at Los Angeles FC, I concluded the FCC midfield needed some work positionally. Coach Alan Koch prefers his midfield to feature a “double pivot.” So, what on earth is a double pivot? And, maybe more importantly, is it the right tactic for FCC to employ? 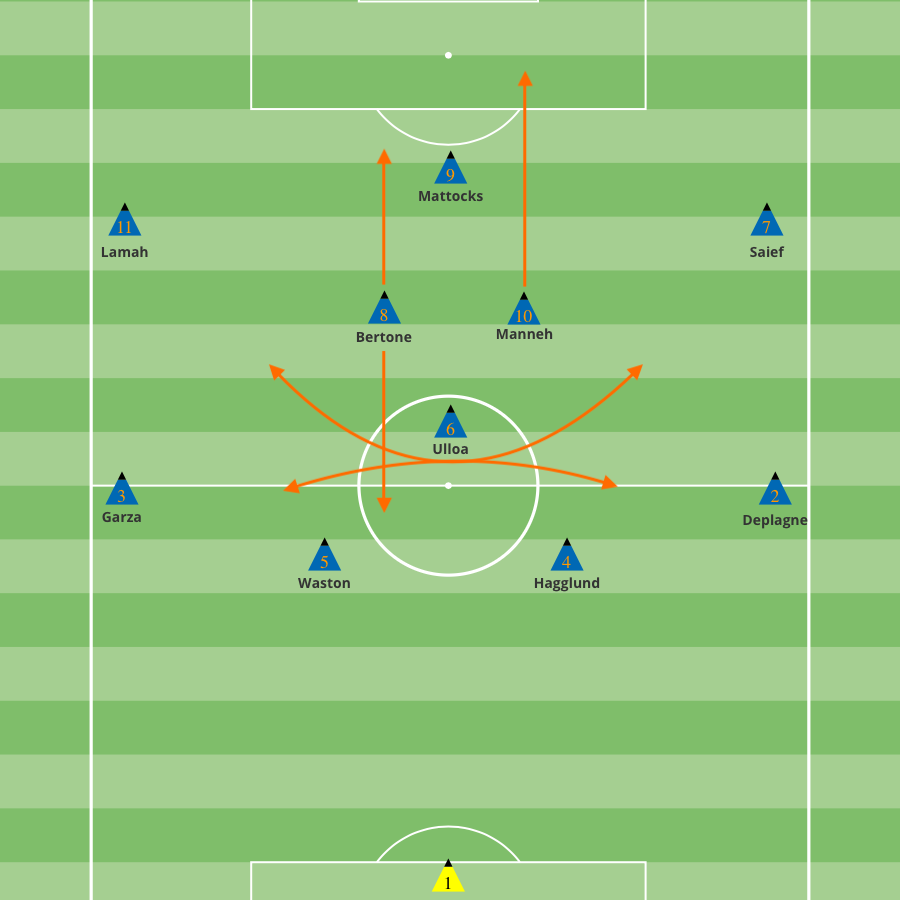 In the image above, I have shown FCC set up in a 4-3-3 formation with a single pivot. Please note, I have used the traditional positional number, not the roster number, for each player.

In this formation Victor Ulloa, the No. 6 (a.k.a. defensive midfielder or holding mid) is responsible for sitting in the space between his attacking teammates and defensive teammates. He must cover a lot of ground, support the attack and break up any counter attacks. Leonardo Bertone is serving as the No. 8 (a.k.a. box-to-box midfielder). He looks to get into the attack and make late runs into the box for crosses but also must track back defensively. Kekuta Manneh is the No. 10 (a.k.a. attacking midfielder or creative midfielder). His job is to get on the ball as often as possible in the attack, string together passes, and create chances. Often times the No. 10 functions nearly as a second striker.

The diagram below shows how, when Kenny Saief has the ball on the wing, Bertone shifts toward him to provide a passing option, while Ulloa simply slides in behind as a supporting player, always aware of the possibility of a quick counter-attack.

Most teams that play with three central midfielders play in a 4-2-3-1 formation like the diagram above. Some still use a single pivot, where the No. 6 stays defensive and the No. 8 roams box-to-box. However, many rely on the double pivot. Here the No. 6 and the No. 8 are interchangeable. As Ulloa gets forward into the attack at the appropriate moment, Bertone is tasked with pivoting back into the defensive midfield, and vice-versa. This is Koch’s favored formation at the moment.

The image below shows how, when Saief has the ball on the right wing Ulloa shifts toward him to provide a passing option while Bertone slides back and centrally to be in position should FCC need to switch the point of attack, or perhaps more importantly, should he need to snuff out a counter attack. 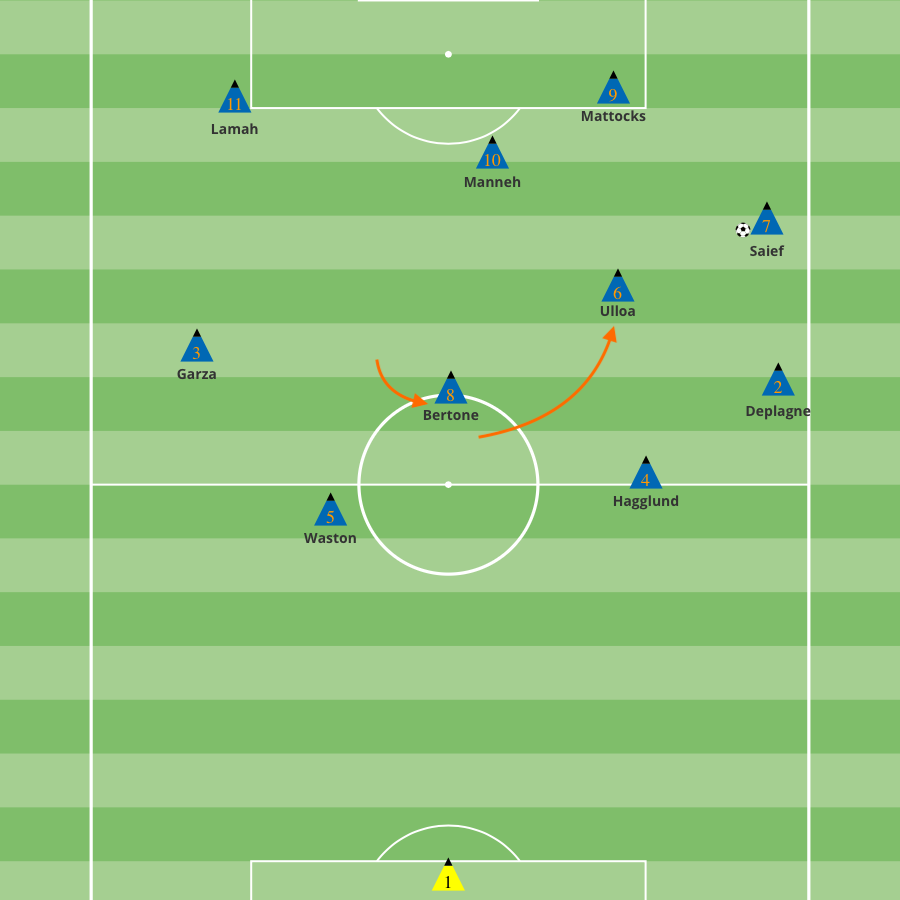 Positives of the Double Pivot 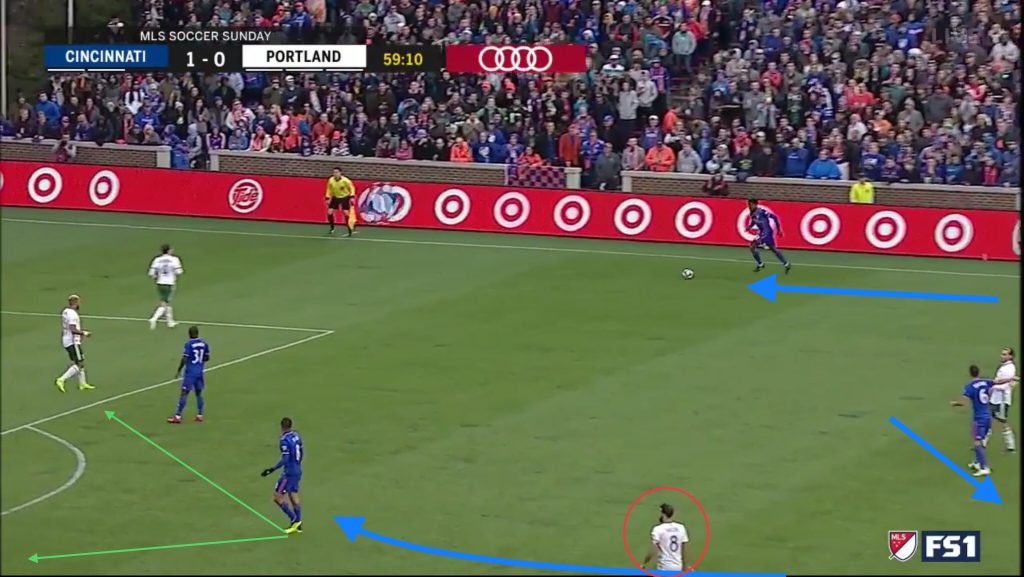 So why does Koch join many of his peers in favoring a double over a single pivot? There are many positives to this way of playing. First and foremost it allows the No. 6 and No. 8 to work together to cover the midfield, allowing each one of them to cover a bit less ground. Secondly, it allows the midfielders’ runs into the attack to be a bit less predictable, as the opponent never knows which player will be bursting forward. In the image above Ulloa has slid forward and lost his mark, while Bertone has stayed back in a defensive position. Ulloa has a ton of space if Allan Cruz can find him with a pass. 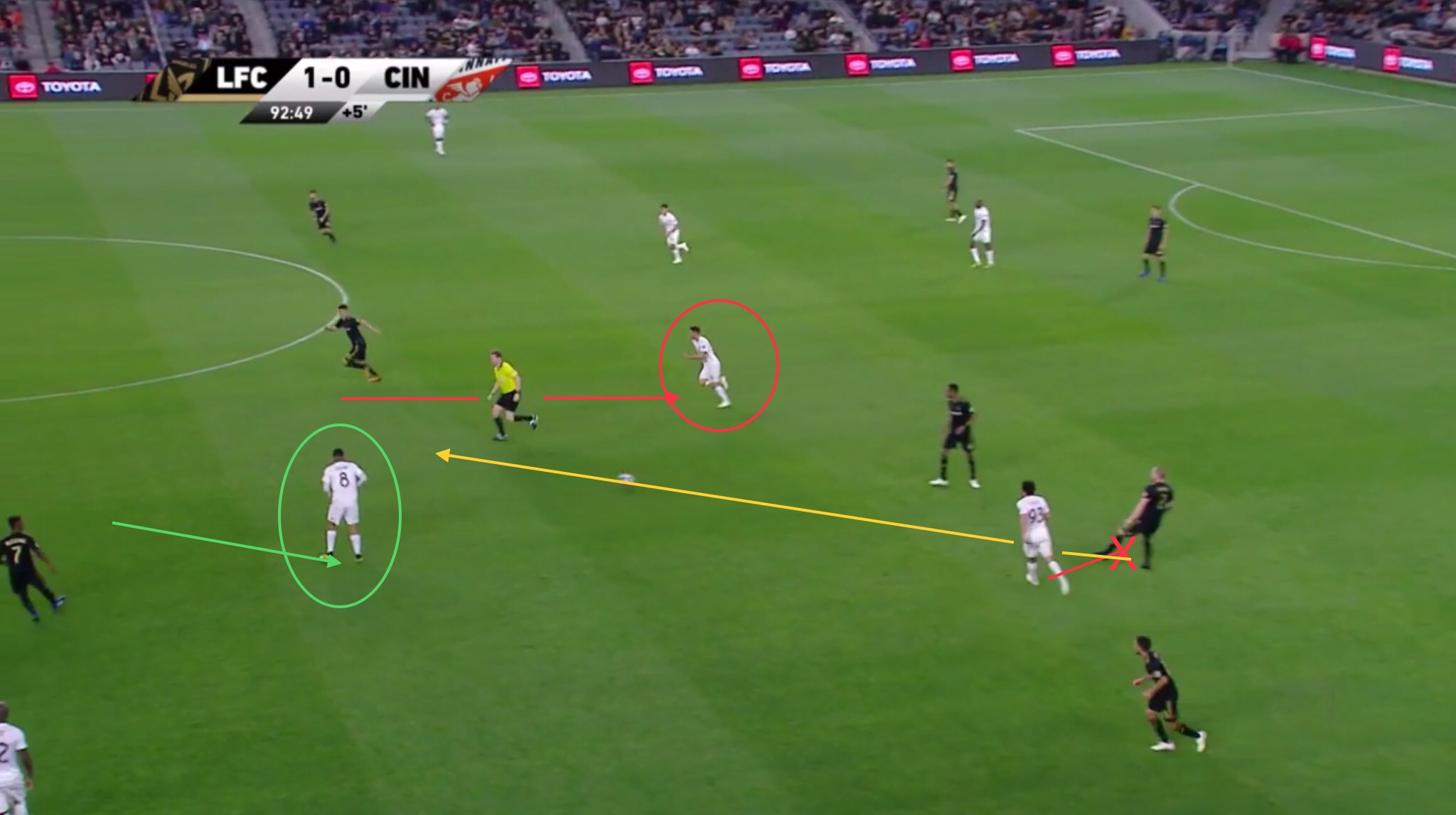 So why doesn’t every team use the double pivot? And, why might a single pivot work better for FCC in the near term? The answer is that it simplifies the roles of every player, giving them a purpose and not requiring them to read and react to what their other teammates are doing positionally. In the image above from the buildup to Carlos Vela’s goal for LAFC, Ulloa has shifted toward the attacking third of the field to support Saief on the ball. However, when Saief turns the ball over, Bertone is still in a high position, failing to shift back into the No. 6 slot quickly enough. With one pass, LAFC is past the FCC midfield and running at speed at the back line.

Whether Koch chooses to stick with the double pivot or play a single pivot, there are potential pitfalls and rewards. I have little doubt that he’ll want all of his midfielders to be comfortable enough with one another to play a double pivot at some point. But shifting to a single pivot could eliminate some of the chances that the team is giving up and put to bed the excuse that the team is still learning to play together.

Brad Gough previously served as the Technical Director of the Northern Kentucky Soccer Academy. Check out his weekly podcast “Talking Tactics with Coach Gough” available on Apple Podcasts, Stitcher, Spotify, or wherever you get your podcasts.

Tune into the latest Cincinnati Soccer Talk podcasts on MONDAY nights at 9
our new podcast on your favorite podcast network each week!