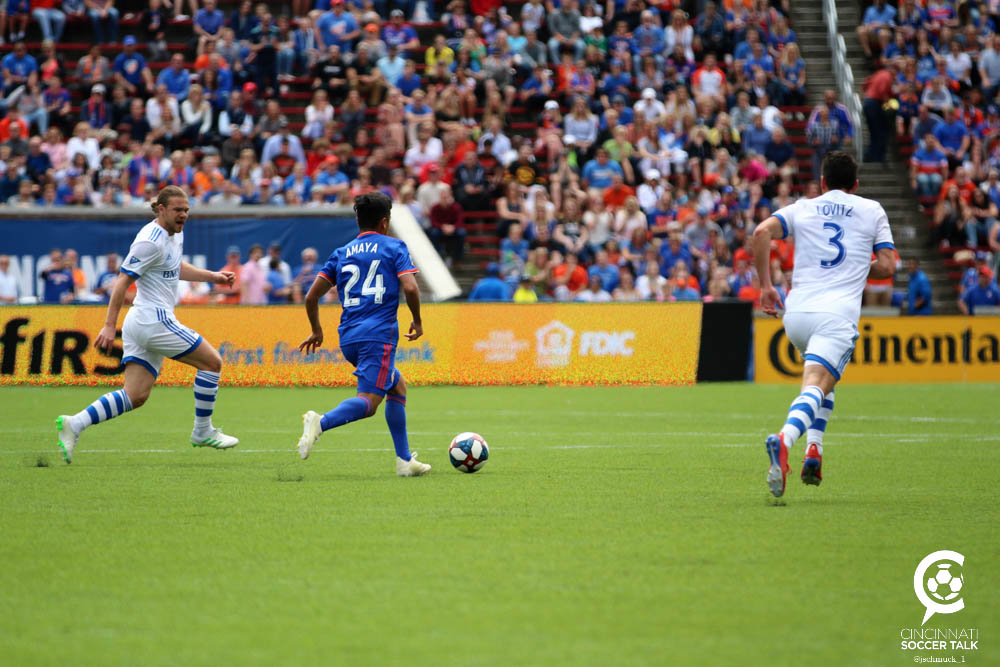 FC Cincinnati scored its first goal in 528 minutes in route to a 2-1 win Saturday afternoon over the Montreal Impact at Nippert Stadium. Here are our weekly player ratings for the match.

FC Cincinnati scored its first goal in 528 minutes in route to a 2-1 win Saturday afternoon over the Montreal Impact. Alan Cruz scored in the seventh minute, and Fatai Alashe added his first of the year in the second half.

Spencer Richey came up big again for FC Cincinnati Saturday. You can’t really blame him much for the first goal, but his shining moment came at the end of the match to preserve the 2-1 win. Anthony Jackson-Hamel got in behind the back line one-on-one with Richey, but the keeper parried the shot away. While Richey wasn’t as harassed as many matches before, he came up with the big save once again. You can only stop the shots you face, and the former USL keeper has shown he has the quality to be an MLS starter.

In his first appearance in over a month, Greg Garza showed the quality that made FC Cincinnati pay a king’s ransom for his services. Outside of Victor Ulloa, Garza was arguably the best player on the pitch. He got up and down the left sideline, showing his value to the roster. He partnered well with Frankie Amaya and helped unlock space in the Montreal back line. If FC Cincinnati can keep Garza healthy, it will be a big boost heading into the final two-thirds of the season.

You might look at some of Capi’s stats and say he had a decent match, but his mistakes should’ve cost FC Cincinnati 2 points. In the 40th minute, he fell asleep leaving Maxi Urruti alone on goal. Luckily the side judge called Urruti’s goal offside and the VAR incorrectly let the offside call stand. Waston was also primarily responsible for the first Montreal goal in the 75th minute when he tried to dribble out of the FC Cincinnati box. His attempted pass to Alashe was well wide of the mark, leading to a three touch Montreal possession for a goal. With a single defensive midfielder, Waston needs to pick his chances when to go forward. Luckily for FC Cincinnati, an incorrect VAR decision took Waston off the hook.

I really liked the move of Hoyte to CB. You could tell that interim coach Yoann Damet was looking to add another dimension to the center back role by placing someone with the ability to distribute out of the back next to Waston. While Hoyte doesn’t have the height of Nick Hagglund or Forrest Lasso, his ability to see the pitch and determine where he needed to be was next level. The former Arsenal man didn’t have a problem stepping up into the midfield at times to relieve pressure and helped get the ball moving up the pitch.

Saturday was another different look for Deplagne. While he was put back into his natural position at right back, Damet made a slight tweak. On defense, he was a standard RB, but when the club went forward you saw him more often than not pinch in and act as a back three instead of getting forward up the line. That gave the club some cover with one assigned defensive midfielder. He did the job well for most of the match but was somewhat culpable on Montreal’s goal. While I lay most of the blame at Waston’s feet for getting so far forward before he turned the ball over, Deplagne simply got beat on the back post by the counter-attacking run of Okwonkwo.

Victor Ulloa was my Man of the Match for FC Cincinnati. Damet deployed him deeper in the midfield behind Amaya and Bertone but ahead of the two center backs. As a regista, Ulloa was heavily involved in possession, completing 72 passes while receiving 71. Damet entrusted him to distribute the ball all over the pitch without exposing the backline to dangerous turnovers. This allowed the first time head coach to push Amaya and Bertone higher without the need for a typical No. 10. In my opinion, the move was a stroke of genius for Damet and another building block going forward.

Amaya was the Man of the Match for many for his pesky effort in the midfield. In 59 minutes he created several opportunities and had a 91% passing percentage. His best work was in partnership up the left flank in the build-up play with Greg Garza. The 18-year-old showed confidence to accept the ball and turn up the field in possession. When FC Cincinnati turned the ball over, he didn’t hesitate to go in on tackles, and his blue-collar effort endeared himself to the Cincinnati fanbase.

Damet moved Bertone out of a double pivot and into a central midfield position that gave him more responsibility controlling possession. While he didn’t have many explosive moments, he did a quality job shuttling the ball in the midfield with an 85% pass completion rate.

Cruz’s goal ended FC Cincinnati’s 528-minute scoreless drought and brought hope back to the Orange & Blue faithful. While his finish wasn’t the prettiest, he brought Nippert Stadium back to life. Though he had the goal, Cruz still leaves some to be desired going forward. Most of his passes were short, and he only completed three in the attacking third. What he lacked in the attack, he more than made up for on the defensive side with five recoveries. I still question his long term viability on the wing, and it will rest on Damet if he thinks Cruz is the path forward or if players like Kekuta Mennah, Kenny Saief or Emmanuel Ledesma are better served in the starting XI.

The right side of the field was quiet for most of the match, but Lamah took advantage of his chance to set up the winning goal for FC Cincinnati. Lamah made a nice run down the line off Bertone’s flick at the half. The winger got in behind Daniel Lovitz but had the presence of mind to send the ball to the top of the box where Alashe was all alone for the goal. FC Cincinnati will need to incorporate Lamah more consistently into the attack but with under a week to prepare with the coaching change, you have to credit that he made the most of his time without the ball.

Coming into the match, it was going to be a tough test for Mattocks with Montreal’s tall back three of Jukka Raitala, Rudy Camacho, and Zakaria Diallo. FC Cincinnati was not going to be able to have success crossing the ball in the air, so it was imperative of Mattocks to keep moving off the ball. He played a crucial role in both goals on the evening, providing the assist for Cruz’s goal. While he didn’t touch the ball in the buildup to FC Cincinnati’s second goal, Mattocks’s movement pulled the center backs away, leaving Alashe alone at the top of the box.

Three minutes into his match, Alashe scored the winning goal for the Orange & Blue. He made a smart trailing run to the top of the box and found the end of a Lamah pass. After coming close twice in San Jose, Alashe slid his shot into the back of the net for a goal. This is two solid matches in a row for Alashe where he has found space at the top of the box. I’d like to see him get on the ball in the midfield more, as he only completed five passes in his half hour of play, but his clinical touch earned FC Cincinnati the three points.

The former USL MVP came into the match in the 74th minute for Lamah but wasn’t able to contribute much offensively. Montreal had the ball for most of the last 15 minutes as FC Cincinnati sat back slightly to preserve the one goal lead.

Mennah came in as a late sub for an injured Allan Cruz.

He might have taken the humble approach after the match, but Yoann Damet deserves a lot of the credit for Saturday’s performance. He rolled out a 4-3-3, and for the first time all season FC Cincinnati was able to reliably connect passes and control possession. Credit to Yoann, he could’ve played conservatively. Instead he chose a system and style that led to over 400 passes in the first half (average 400+ per match). To keep things somewhat in perspective, Montreal played midweek and didn’t have enough energy to perform their high press to make things difficult for the home side to hold the ball. Overall Saturday was a step in the right direction, and Damet has a couple of building blocks in place to build on in practice this week.