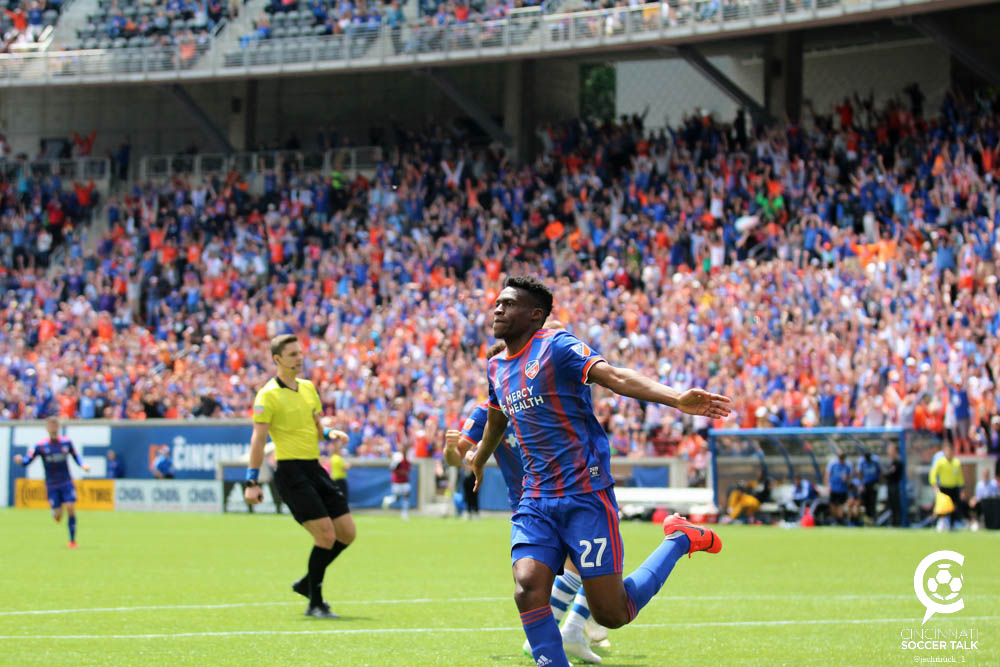 FC Cincinnati’s play in Saturday’s 2-1 victory over the Montreal Impact was full of confidence and energy largely absent from the pitch in the last few weeks.

The club played with seemingly renewed vigor for interim coach Yoann Damet after the ouster of head coach Alan Koch provided a midweek disruption. The biggest difference was giving the club a little freedom to thrive, Damet said.

“The most important pieces are the players,” Damet said. “We want to provide an environment that allows them to express themselves. The players showed that they are capable of playing football. That’s what we ask them to do — to believe in themselves and to have confidence. They deserve fully the credit for the performance.”

After the coaching shake-up hit on Tuesday, midfielder Frankie Amaya kept himself detached from the news.

“I didn’t pay attention to social media,” he said. “I just got off my phone and talked to my mom and dad. I just want to play the beautiful game and I’m happy we got a win.”

Just being able to play, especially in the friendly confines of Nippert Stadium, was a relief.

“This is what we live for,” Fatai Alashe said. “We work hard in training, and we work hard to get the opportunity to go and play in the game. I think guys really embrace it even though it’s been a tough week, and I think it showed on the field.”

In his first media appearance as interim coach on Wednesday, Damet deflected attention from himself to the players.

But make no mistake, Damet’s role in establishing the right environment was noticeable.

“He’s being humble,” Richey said. “He definitely was a big factor this week and that’s something he preached from day one — to get the enjoyment and the fun back in our play. That’ll lead guys to working harder, wanting to not let guys down and doing the extra bit of work.”

Perhaps the most notable difference on the pitch Saturday was Amaya’s performance.

Fresh off his loan to Orange County SC, Amaya made his second MLS start and first at Nippert. The No. 1 overall SuperDraft pick was a catalyst in the midfield, completing 91% of his passes and creating two chances in his 59 minutes of action. He left to a rousing Nippert ovation.

The difference between Saturday and his first start the week before in San Jose was just a matter of energy and confidence from his teammates, he said.

“I had some fuel in me,” Amaya said. “We possessed the ball more. I had more energy to run, to create. I just felt more confident on the ball.

“My teammates give me so much confidence on the ball. I feel like they believe in me, and I believe in them. Every time they talk to me, I get an impression in my head that I want the ball more, and they give me the ball.”

On Friday, Amaya learned he was passed over by United States under-20 national coach Tab Ramos in World Cup roster selection.

“Obviously I was as little disappointed but it was just a little bump in the road and I’ll move on from it,” Amaya said. “It’s not going to stop me.”

Amaya’s omission is FC Cincinnati’s gain. It means Amaya will be around for at least three matches he would have otherwise missed. U-20 World Cup group play begins next week in Poland and lasts until May 31.

“From here we just look forward, not back,” Amaya said of the roster selection.