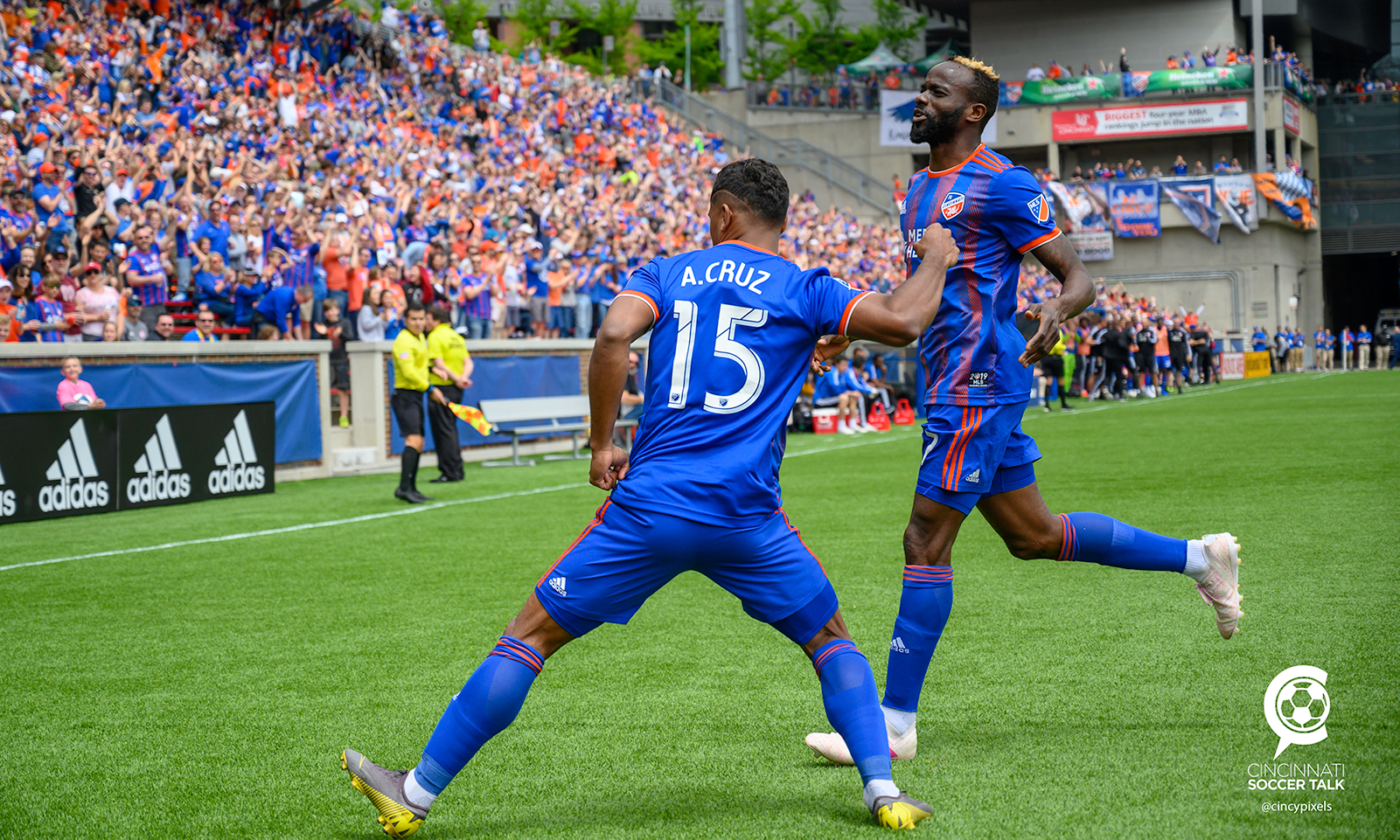 Allan Cruz’s seventh-minute goal was the first in 528 minutes for FC Cincinnati. The Orange and Blue christened interim coach Yoann Damet with his first win in an improved performance just four days after the ouster of head coach Alan Koch.

After a tumultuous week, FC Cincinnati seems to have a fresh start on its inaugural MLS season.

The club removed head coach Alan Koch just four days prior to Saturday’s match at Nippert Stadium, leaving interim coach Yoann Damet in charge. Damet’s squad played with injections of confidence and energy not seen in weeks and stood tall late to end its goalless and winless droughts with a 2-1 victory over the Montreal Impact.

“I hope it’s a fresh start,” said Damet, who faced his former club and became the youngest coach in MLS history at 29 years, 53 days. “It’s going to be a long way. It’s always ideal when you try to implement new ideas to get to win quickly, to get some confidence in what we expect them to do. I don’t want to lie to myself — I know with the way we want to try to play there are going to be some moments that are more difficult than others. We saw a lot of good things this afternoon. We’re going to build on that to bring that confidence to the players. The credit is to them.

“The way the guys showed up this afternoon was just brilliant. Everything wasn’t perfect but the character and the willingness to apply the gameplan was very, very satisfying. They deserved it, because they put the work in.”

Damet made some changes to the starting lineup. Greg Garza, finally healthy, started for the first time since April 7 and played a full 90 minutes. And Justin Hoyte moved from right back to center back, giving the Orange and Blue a bit of a different look.

FC Cincinnati went the previous 521 minutes without a goal. Under Damet, it took just seven minutes for the club to hit the scoreboard.

Allan Cruz nestled one just under the crossbar on a cross from Darren Mattocks for an early 1-0 lead. It was the first goal from open play since Kenny Saief scored in New England on March 24, a 662-minute drought.

FC Cincinnati was dominant in the first half with 401 passes — more than the total of five different matches — with 89% accuracy and 65.8% of possession.

Damet kept things in perspective, cautioning Montreal had a midweek road match Wednesday against the New York Red Bulls and didn’t press often. But the implementation was visible, he said.

“We’ve only had really three days to prepare the way we wanted to play,” Fatai Alashe said. “But the guys did a good job, especially in the first half, of using the ideas we tried to create in training the last few days and really applying in on the field. We tried to keep the ball a lot more, tried to be calm in possession and just play. I think it looked pretty good.”

The upgrade in play was noticeable. In the opening minutes, FC Cincinnati featured more punch and crisper play.

In his second straight start since being recalled on loan from Orange County SC, top SuperDraft pick Frankie Amaya proved to be a midfield sparkplug. He initiated counterattacks and asserted himself as a distributor. In just 59 minutes, he completed 91% of his passes and created two chances.

“I’m happy with Frankie,” Damet said. “Young players, age doesn’t matter. I was happy with the confidence that he showed. He has all the confidence and the belief of the staff but also the players. This tells you a lot. He did a great job. He wasn’t able to play 90 minutes. In the second half it was a bit more difficult physically. But what he provided on the field for the length of his game was very good.”

Montreal grew into the game in the second half and looked ready to equalize. In a matter of three minutes, Samuel Piette had a shot blocked and another one snuffed out by Spencer Richey, and Shamit Shome knocked a header over goal.

Then FC Cincinnati knocked in an important insurance goal in the 62nd minute. Leonardo Bertone sent Roland Lamah out wide to the right. Lamah crossed to Alashe, who subbed in for Amaya. Alashe slotted it in the left corner from the top of the box to make it 2-0.

“The last couple games I’ve come in and been close, so it’s been a little bit annoying,” Alashe said. “But definitely nice to finally get one to go in the back of the net.

“It’s probably because I’ve been missing the target in training the last couple days. I always try to hit it upper 90. I told myself to just pass it in the goal.”

Alashe’s goal loomed large in the 75th minute when off a turnover, Maximiliano Urruti found Orji Okwonko, who put a header off the Nippert turf and between Richey’s legs to make it 2-1.

Montreal threatened again in the final stages of regulation.

In the 90th minute, Anthony Jackson-Hamel broke through the FC Cincinnati defense and was one-on-one with Richey. But Richey stood his ground, and the shot went off his chest.

The result was a positive end to a rough week.

“It’s never fun with a coaching change, but all you can really do is try to look at the positive and try to move forward,” Richey said. “A lot of guys took it as a reset button if you will and get back to playing the game, enjoying the game, working for each other — some things that I think we lacked the last month or so. Guys worked really hard this week, and to reward the guys and the fans and the supporters and everyone that stuck with us with a fun win was pretty special.”