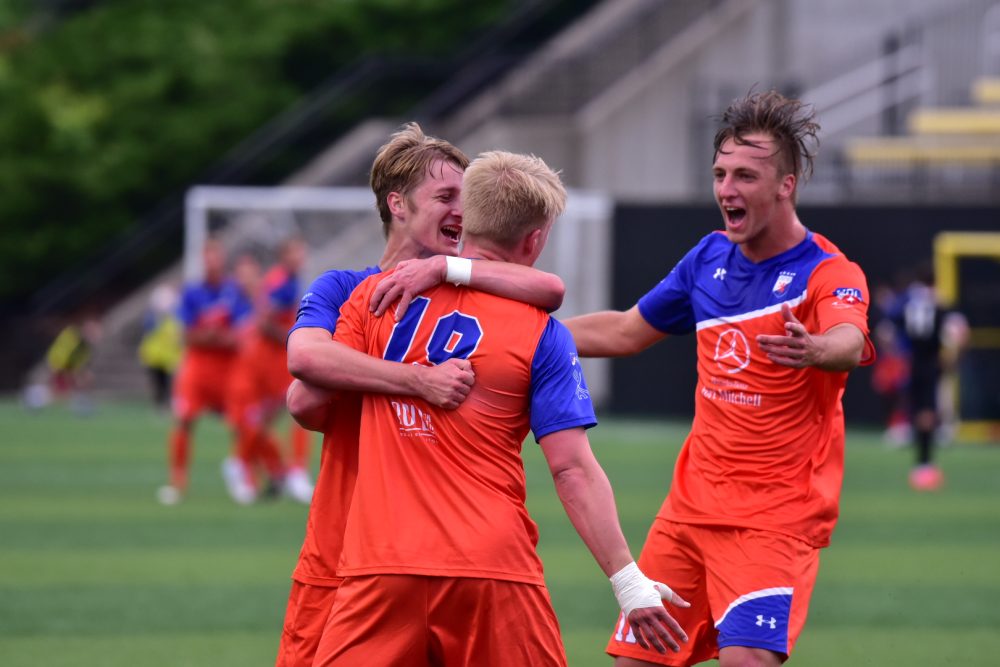 The USL League 2 Great Lakes Division kicked off with Cincinnati Dutch Lions FC taking on the West Virginia Alliance. The Alliance is no stranger to CDLFC fans as they went 1-1-1 last season against the club. The Alliance, formally known as the Chaos, entered the match with a defensive strategy but that didn’t stop the away side from attacking early. As soon as the whistle blew West Virginia countered and drove down the pitch. The ball went out for a corner and the kick in nearly resulting in a goal. Cincinnati’s keeper Westley Storm was able to get a hand on it and deflect it off his line.

The quick attack for the Alliance was one of their best chances in the first half. Coach Paul Nicholson’s side began to quick press West Virginia creating turnovers and intercepting passes. Cincinnati held possession and attacked the left side of the pitch working through the midfield. Cincy’s passing was truly impressive despite having just started training recently. Kirchhoff and Guinovart controlled the midfield and strung together pass after pass to launch the attack. In the twelfth minute, one of those through passes was launched behind the line to Alexander Willis who pounced and nearly put away a goal early. The Cincinnati Dutch Lions continued to control the pace of the match but Alliance keeper Tom John held the home side off for the first part of the first half.

After a couple of near chances, Connor Probert was able to take the ball away in the attacking third and send it to the top of the box, a quick deflection and pass over to an open Kirchhoff opened the gates. Tom John was caught too far right and Kirchhoff sent the ball in the left side of the net putting Cincinnati Dutch Lions up one. It was not the only one as Alexander Willis finally snagged one of his own in the 38th minute. Willis, an NKU player, had been denied a few chances earlier and the anticipation was building for him to slot one in.

Holding and Extending the Lead in the 2nd Half

Surprisingly, Cincinnati didn’t drop back in the second half to protect their lead. They played defensively by maintaining a strong offense. In the 56th minute, Probert beat his man on a counter and slid a beautiful cross into Willis to put the Dutch Lions up by three. It was smooth sailing after that as the Alliance only mounted a strong attack near the end of the match.

Keys to the Match