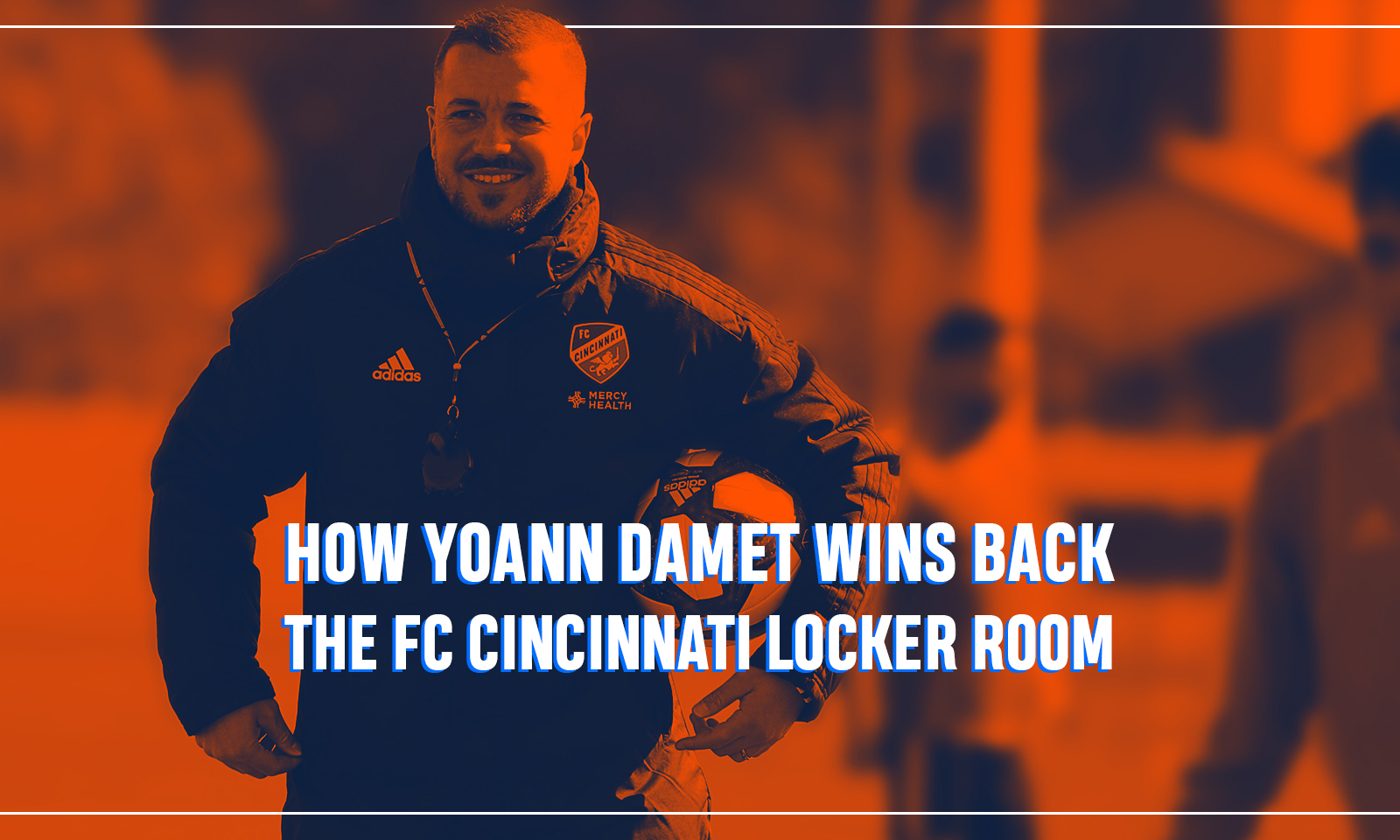 After FC Cincinnati president and general manager Jeff Berding announced the firing of coach Alan Koch on Tuesday with the words, “After a series of recent issues and a team culture that had deteriorated, we determined that it’s time to make a change to return a club-centered focus to the team,” Yoann Damet was introduced as the club’s interim manager. Damet has a large to-do list in front of him, including finding a way to score goals and get results. However, first and foremost he needs to win back an FC Cincinnati locker room that had reportedly begun to chafe with the coaching staff.

1. Get buy-in from the team leaders

Let’s not kid ourselves, Damet is a new coach. When it comes to authority, it doesn’t matter that he’s been with the club for two-plus years. Damet may have a good relationship with players on the team, and that can help him, but he needs to immediately get the team’s top leaders on board with supporting him as an authority figure.

This doesn’t just mean captains, veterans, and stars. Of course, if Kendall Waston and Fanendo Adi aren’t supporting Damet, then no one will. But Damet needs to be strategic about asking for input and support from players that are in varying clicks and factions. He needs to meet with them, listen to their ideas and ultimately get them on his side with the rest of the players.

2. Play players in their natural positions

Adi: “We can’t play guys out of position and expect them to be excellent in those positions where they don’t play.”

Berding: “… hold (the players) accountable in a trusting environment where they have the best opportunity to maximize their potential, playing guys in their natural position, and giving us the best chance for success”

Players want to succeed. Their seasons, future contracts and careers depend on it. Players also need confidence to play well. Putting players in a position to succeed is goal No. 1 when selecting a lineup.

There is an age-old coaching adage that a team’s 11 best players are not always the best 11 to play together. Damet needs to figure out how to put as talented a team on the pitch as possible without shoe-horning good players into unfamiliar positions.

It is not realistic to expect that removing the head coach and promoting the assistant coach will fix all the ills within the FC Cincinnati team. Damet needs to walk the line of managing expectations outside of the club while showing his players that he believes in them and supports them.

Damet needs to get in front of the media and do the difficult work of lowering the bar of expectation while showing the world that he trusts his players and expects them to do well.

4. Be the hardest worker at the club — and be about it

In order to assert his authority, get players to trust him and earn the respect of everyone involved, Damet needs to immediately begin portraying himself as the hardest worker in the organization. He needs to be the first to arrive at the training ground and the last to leave. He needs to watch way too much film and construct detailed practice and game plans.

However, working the hardest isn’t enough by itself. One needs to be clever about it. Damet needs to make sure everyone knows how hard he is working without talking about it. He needs to make it obvious without being obvious about it. The easiest way to begin this is through acts of service to his staff and his team. They’ll know what he is doing, and they’ll appreciate it, but he won’t have to say a word.

5. Take all of the blame and none of the credit

Coaches that throw players under the bus lose instant credibility with those players, anyone who respects those players and anyone who can see that they may be the next on the list for the coach to heap blame upon. Successful coaches are quick to credit their teams for successes on the field and quicker to shield them from blame when things are going poorly.

Saturday will be Damet’s first opportunity for this. There will be things that go well, and things that don’t quite come off. Damet would be smart to get in front of the cameras after the game and give credit where credit is due and take the blame for the rest.