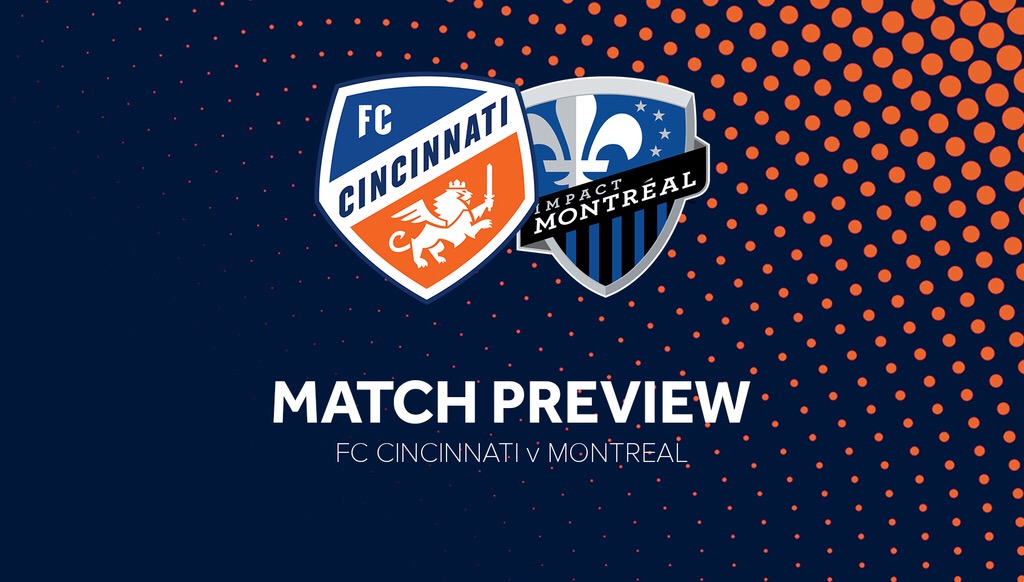 The Damet era begins for FC Cincinnati in Week 11 at home against the Montreal Impact at 1:30 p.m. Saturday.

FC Cincinnati enters Week 11 hoping that it can begin to regain form when it returns home to face the Montreal Impact at 1:30 p.m. Saturday. This match is the first time that FCC has played against Montreal during the regular season. However, FC Cincinnati went up against Montreal this preseason at IMG Academy in Florida. That match resulted in a 1-1 draw with Darren Mattocks scoring the first preseason MLS goal in club history.

FCC is currently on a seven-match winless streak, the longest stretch in club history. FC Cincinnati still sits at 11th on the Eastern Conference table, only in front of the New England Revolution. Despite all of its struggles, FCC is only four points out of a playoff spot. A win against a quality side like Montreal that is currently tied for first in the Eastern Conference Table could put FC Cincinnati right back on track.

The biggest storyline of this match will feature the MLS coaching debut of Yoann Damet. At just 29, Damet is by far the youngest MLS coach, with FC Dallas’ Luchi Gonzalez second on the list at 38 years old. Damet’s first match as interim coach for FC Cincinnati will be against his former club. Damet served as the U-12 coach for the Impact from 2014-15 and as the U-18 coach from 2015-17.

The first objective for Damet as interim coach of the Orange and Blue should be for his team to put a goal in the back of the net. The club is currently in a 521-minute scoreless drought and last scored on a penalty kick by Darren Mattocks against Sporting Kansas City on April 7. FC Cincinnati has also scored the least amount of goals in MLS this season, only netting eight goals so far. At this point it doesn’t really matter who scores, someone just needs to step up. With Montreal tied for second for the most goals allowed in the Eastern Conference, this might just be FC Cincinnati’s chance.

With Damet at the helm, it is hard to know exactly what changes he will make to the starting XI in terms of both the formation and players. There is a strong possibility that midfielder Frankie Amaya could find himself back in the starting XI after being one of the few bright spots in a dismal match against the San Jose Earthquakes. A big question is whether Faneado Adi is fit enough to play a full 90 minutes, or at least start the match against the Impact on Saturday. If inserted back into the starting XI, his presence on the field could help the club start going in the right direction once again.

There is a strong possibility that Montreal might rest some starting-cailber players against FC Cincinnati as it has already played a weekday match against the New York Red Bulls on Wednesday. With the Impact beating the Red Bulls 2-1, Montreal might not feel a lot of pressure to play its best XI on Saturday against FCC.

The primary goal scoring threats for Montreal include midfielders Saphir Taider and Ignacio Piatti who each have three goals a piece. Forward Maximiliano Urruti  has also played a significant role in Montreal’s offense, leading the Impact with four assists on the season. Montreal goalkeeper Evan Bush has had success in net, recording five shutouts (tied for the most in MLS this season),  but has also allowed multiple goals in a match four times this season, including seven against Sporting Kansas City. What caliber Bush and the defensive squad play at could go a long way in deciding the outcome of this match.

This match against Montreal might be exactly what the Orange and Blue need to get back on track. With the players energized in front of their fans with a new coach, it would not be surprising if the goalless and pointless streaks both end on Saturday. This match is the definition of a “trap game” for the Impact, coming off of a win against the Red Bulls on Wednesday, as they might underestimate FC Cincinnati on the field by potentially resting certain players. The main question for this match is whether FCC can regain their early season form with Damet now in charge.