Touching on the FCC goals conceded briefly before moving on to what I think could be some hope for the near future.

The growing frustration surrounding FC Cincinnati is palpable. Casual fans are beginning to tune out. Ultra-serious fans are beginning to scream “Koch Out!” And the rest of us in between are wondering if Coach Alan Koch and the FCC players can figure it out. In the most recent match, a 2-0 loss at the hands of the Philadelphia Union, FCC was plagued by the same sorts of individual defending errors that have caused them to concede of late.

However, maybe because there is a very slight glimmer of hope towards optimism, or because I’m tired of writing about the same old mistakes match after match, I’m only going to touch on the FCC goals conceded briefly before moving on to what I think could be some hope for the near future.

The image below is a single still shot from the first goal that the orange and blue conceded. Put simply, Alvas Powell did two things wrong: First, he failed to keep up with his teammates as they stepped their defensive line forward, holding Kacper Przybylko onside by the slimmest of margins. Second, as he stepped forward he failed to maintain what coaches call “ball-side, inside-line” positioning. In layman’s terms, he stepped out behind the Union attacker instead of between him and the ball.” 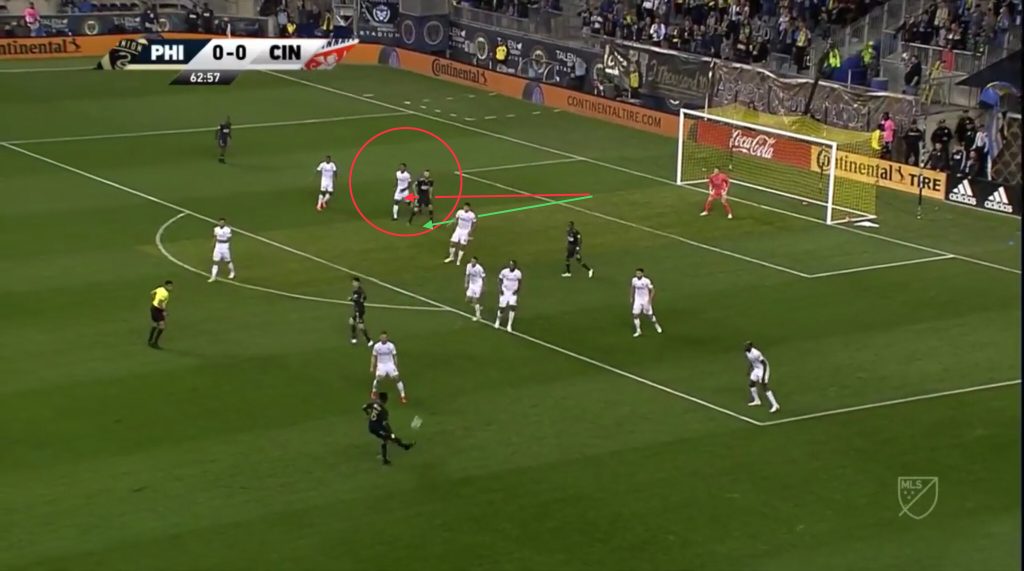 The second goal that FCC conceded was a bit more complex. The compiled photo below shows step by step what went wrong. First, Kendall Waston did a great job of communicating to Mathieu Deplagne that he wanted Deplagne to recover to his outside as he forced the Union attacker away from the center of the goal. Eric Alexander did a good job filling in the gap between Waston and fellow center back Nick Hagglund. However, Waston then failed to maintain his positioning to force Ilsinho wide, and instead fell for a quick step over move and got beat to the inside. At that point, Deplagne was hopelessly out of position, expecting to be providing cover to the outside, and Ilsinho had no problem slotting the ball in for Fabrice-Jean Picault who ran in behind Hagglund unnoticed. 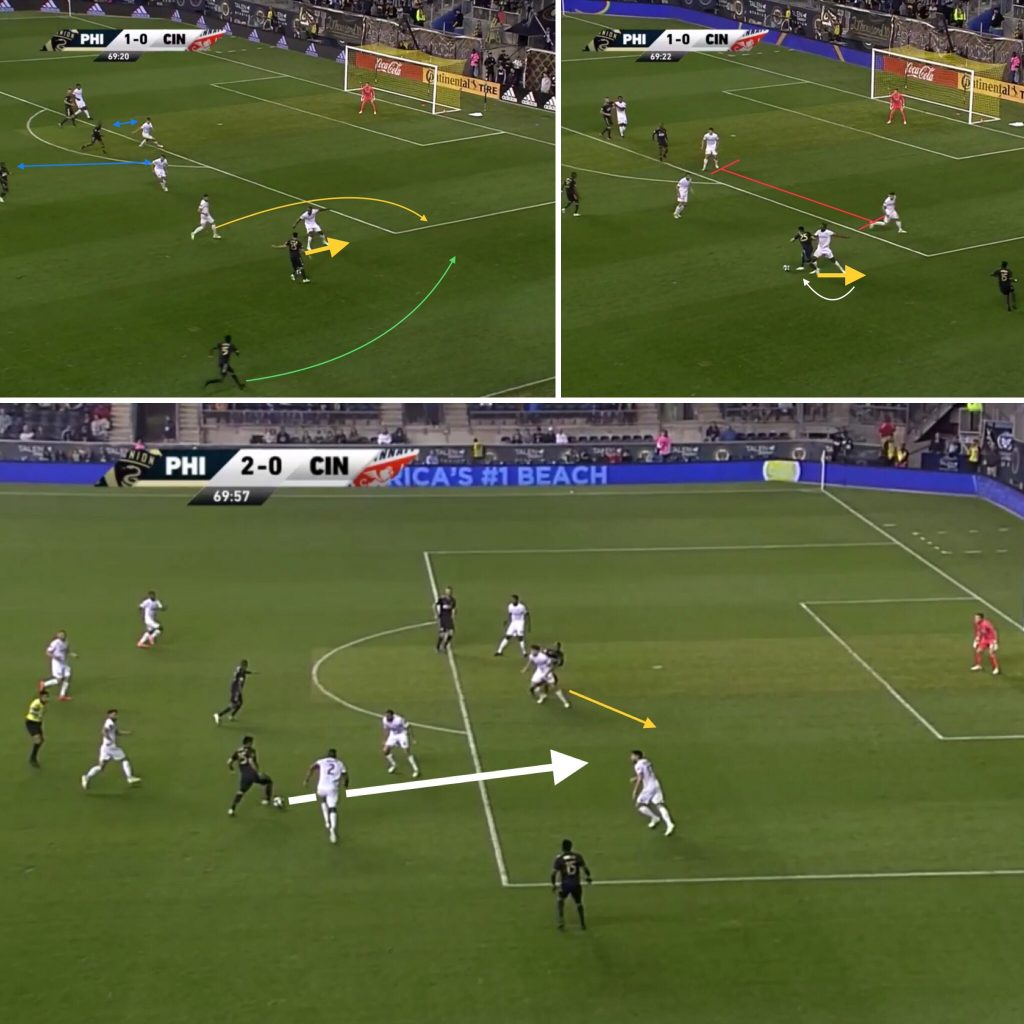 But enough about the individual errors, and on to some possible solutions.

I’m not one of the few who claims that the inevitable return of Fanendo Aid to the FCC lineup will cure all of the club’s offensive woes. That said, FCC has definitely gotten the ball in some threatening positions, and a single player that can provide some intelligent movement in and around the box could create a domino effect that sparks some life into an otherwise flat-lined attacking unit.

Take this possession for example: 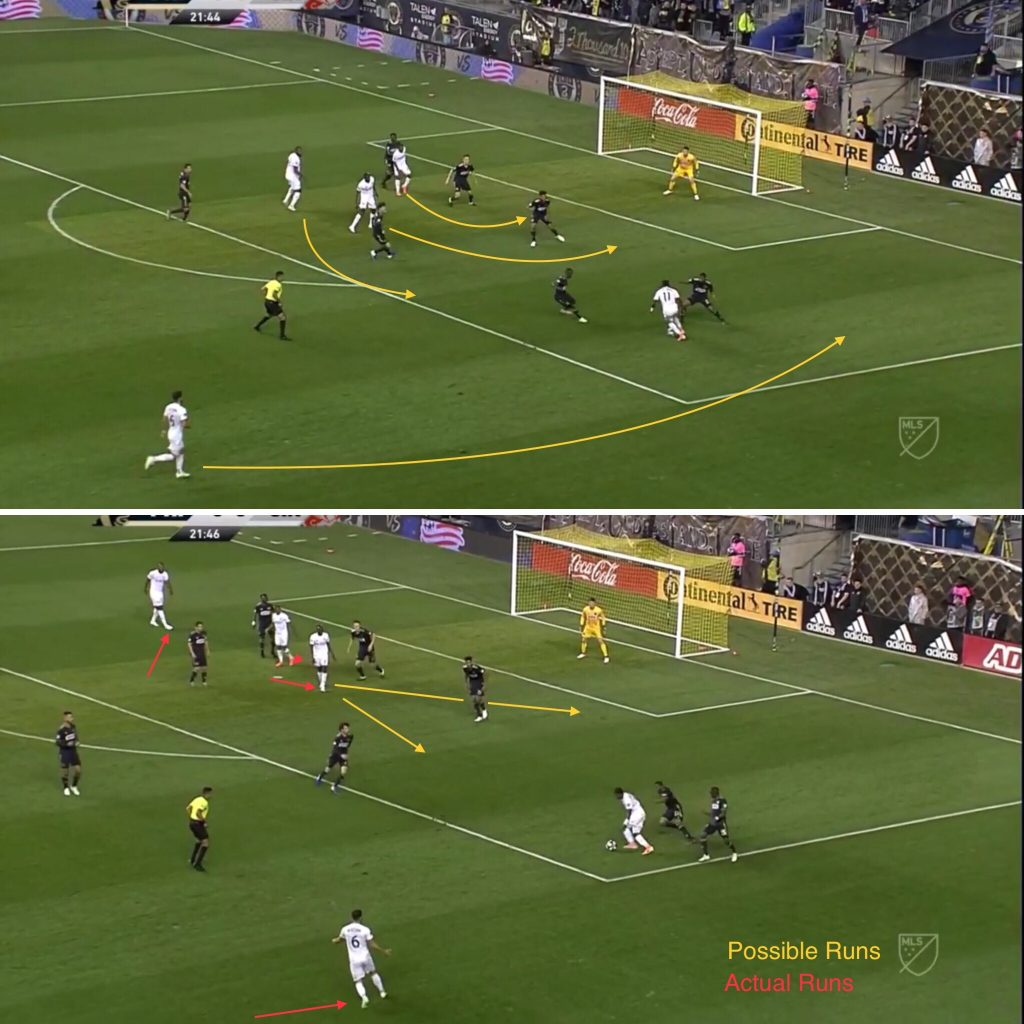 Darren Mattocks was able to possess the ball in the Philadelphia Union box for no fewer than six seconds. In that time, Roland Lamah or Allan Cruz could have made the kind of darting run in behind the back line that allowed Picault to score for Philadelphia. Kendall Waston (still forward from a set piece) could have curled to the top of the box looking for a cutback pass. Leonardo Bertone could have made an overlapping run to try to pull one of the defenders away from Mattocks. However, all chose to hold their positions and wait for service. After juking and jinking his way into an awkward crossing position, Mattocks blasted the ball against a Union defender and it deflected out toward midfield.

In the example below, Mathieu Deplagne gets the ball in a very good position, and the FCC attack is in an ostensible 6v6 situation with the back line of the Union pulled apart exposing some major gaps. 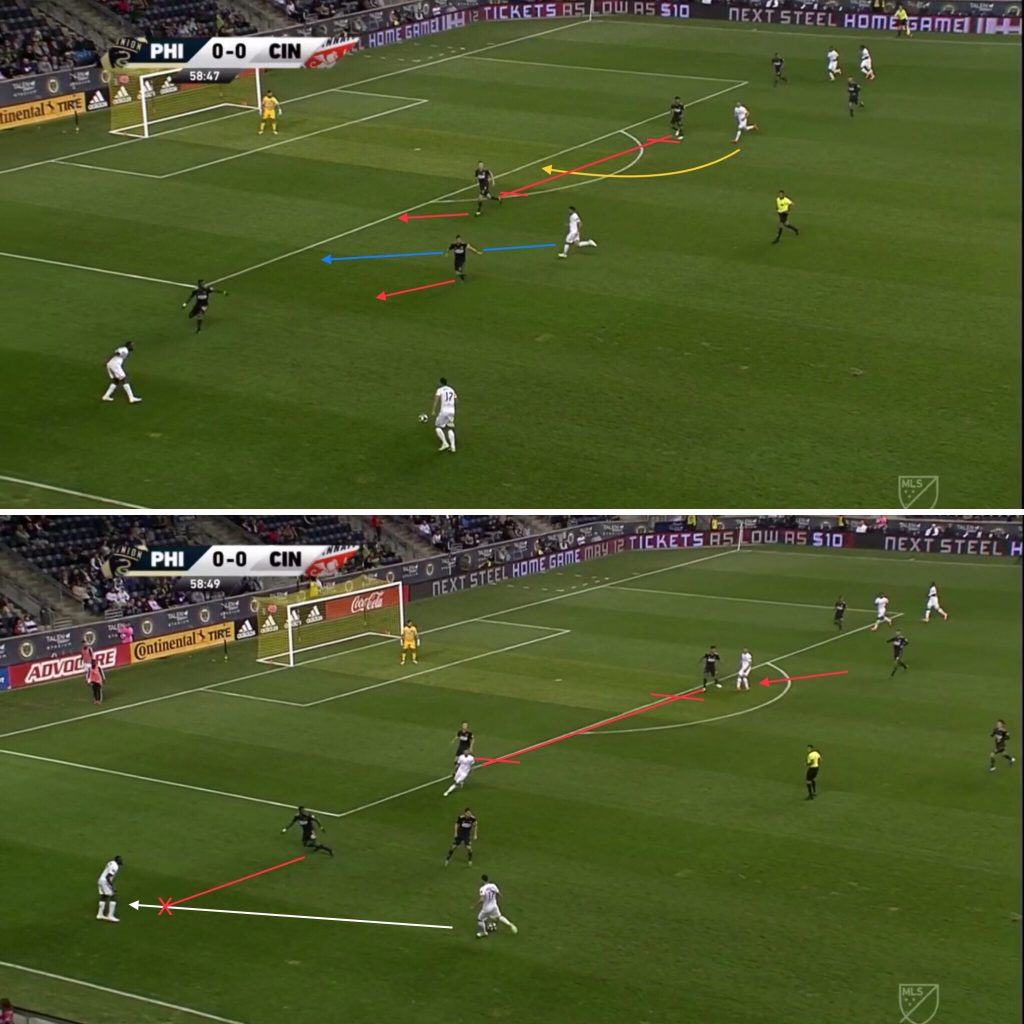 Leonardo Bertone begins by making a fairly intelligent run toward the corner that pulls the two Philadelphia center backs even further apart. At that moment, Caleb Stanko, Allan Cruz, and Alvas Powell all had the opportunity to break into the box for potential service. Instead, all three players hold their runs waiting to see what Deplagne would do with the ball. He plays it to Roland Lamah on the wing who promptly loses out to the challenging Philadelphia defender.

And what about running in transition? 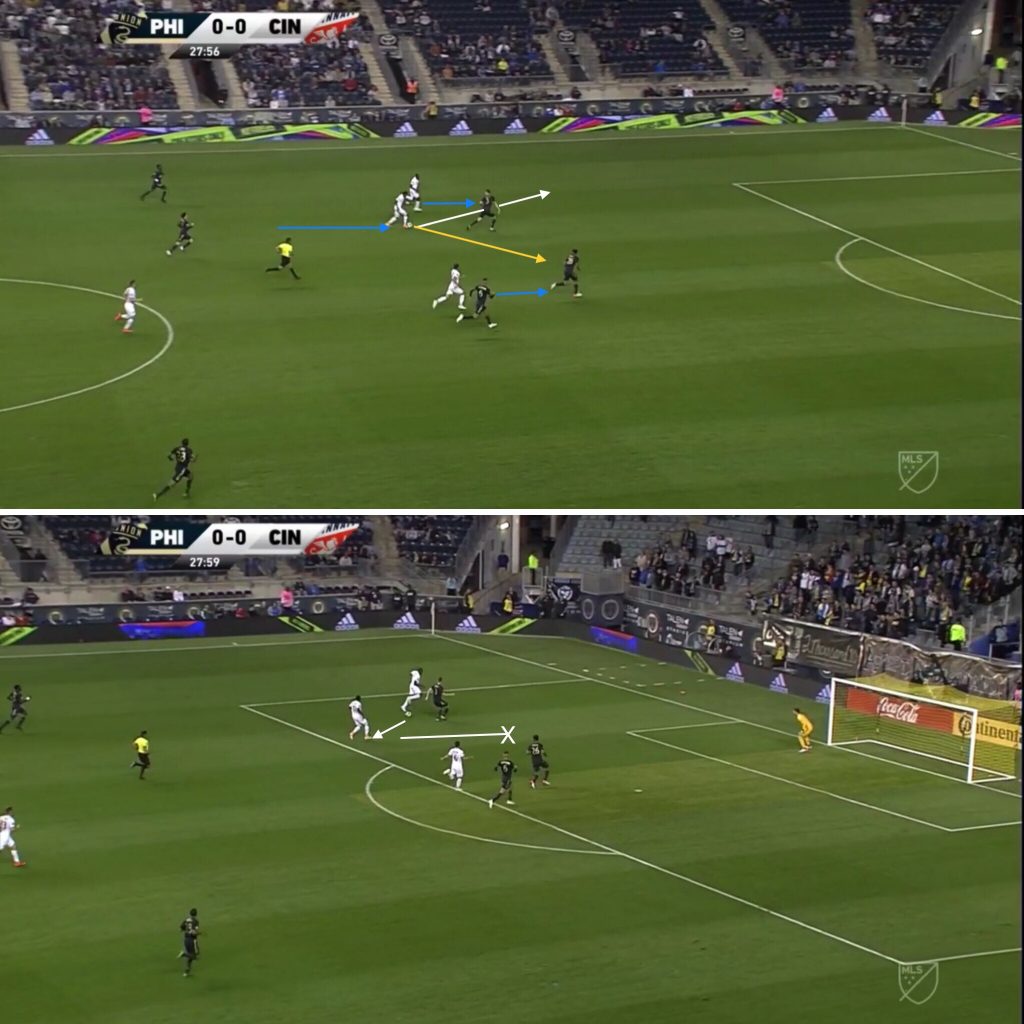 Again, FC Cincinnati found themselves in a great position as Mattocks burst forward through the midfield creating a 3v3 opportunity in transition with Lamah and Bertone running alongside him. Lamah ran straight forward, Bertone ran straight forward, and Mattocks dribbled straight forward. The Union defense was not asked to make any complex decisions as to who to cover and who to let run, and they easily eliminated Bertone from the play with simple positioning. Had Mattocks dribbled to split the defense (yellow arrow), he would have opened up the possibility for Bertone and Lamah to make a variety of different movements. Then, the Philadelphia defenders would have had to choose whether to stop Mattocks on the ball, freeing up one of the other FCC attackers, or cover the runners, allowing Mattocks to continue on toward the goal.

Separately, these missed opportunities do not stand out as blights upon the FC Cincinnati attacking record. When viewed together, it is easy to make the argument that a single FCC forward making a dynamic and intelligent run could have changed the outcome of any or all of them.

Did We Actually See a Tactical Change?

The thing that I’m most excited about from the Philadelphia Union match, however (and I use the term “excited” very loosely), is the apparent use of a single pivot defensive midfielder by coach Koch.

Don’t know what I mean by “single pivot?” Check out my prior article: Talking Tactics: What is a double pivot?

Eric Alexander appeared, for much of the match, to act as said single pivot. His stats were team-leading in some categories, and having two other central midfielders in front of him allowed him to successfully pass forward 17 times. Compare that to Bertone and Stanko combining for only 15.

And defensively? I can honestly say that Alexander is not the answer as a single pivot moving forward. He simply isn’t mobile enough to cover the ground. However, the tactic worked for much of the match as evidenced in the sequence below. 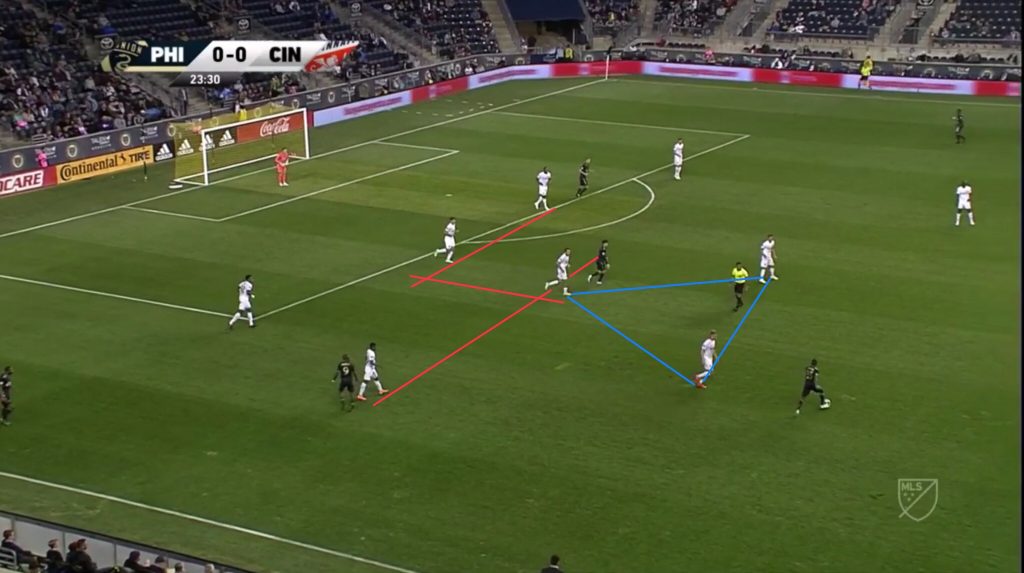 As the Union possessed the ball in the attacking third, the FCC midfield triangle (blue) was able to provide pressure on the ball, limit the distance between the lines (red), and screen Brenden Aaronson from getting on the ball. Aaronson’s Audi index score was 24. Compare that to the first meeting when he achieved a 175. 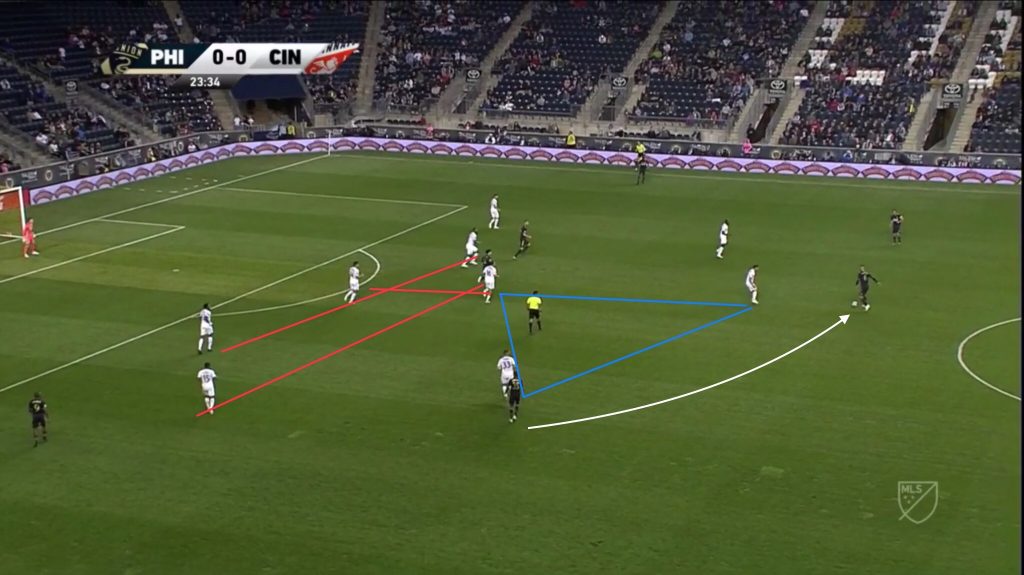 As the Union moved the ball across the midfield the FCC back line was able to compress even further, because Alexander was screening Aaronson leaving Przybylko as the only attacker threatening Waston and Hagglund. Stanko and Bertone easily maintained the shape of the midfield, as they were only asked to move side to side and not worry about attackers creeping in behind them. 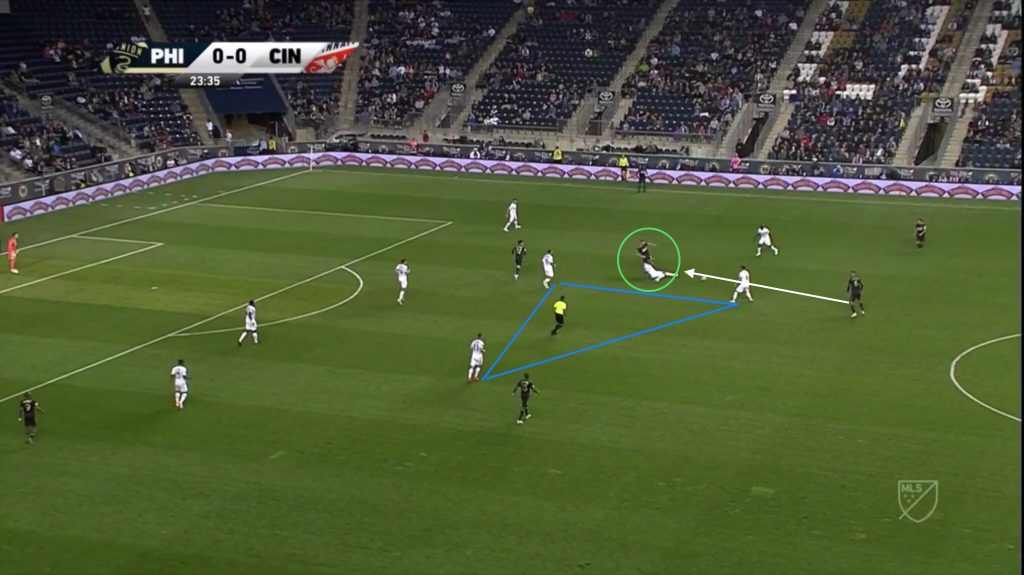 Then, as the Union attempted to split the FCC lines with a pass, Waston was free to close on the attacker and make the tackle, knowing the midfield was in a good position to cover for him if he lost out on the challenge.

Opponents like Aaronson, Carlos Vela, and Albert Rusnak have made a living playing between the FCC midfield and back lines of late. However, in this match, Aaronson found no such joy largely because of the use of a single pivot. If Allan Cruz, a.k.a. Tico Kante, can slide into the single pivot with the same tactical acumen that Alexander displayed, but provide the mobility and speed that he lacked, this could be a viable tactic for FC Cincinnati moving forward.

As for goals, that is a much more speculative proposition. FCC is getting into good positions, creating a few chances on the break, and even finding themselves in on goal with only the posts to beat. With one attacking piece who knows how to free himself up in the box in these moments (read, Fanendo Adi), they may just be able to find the back of the net.