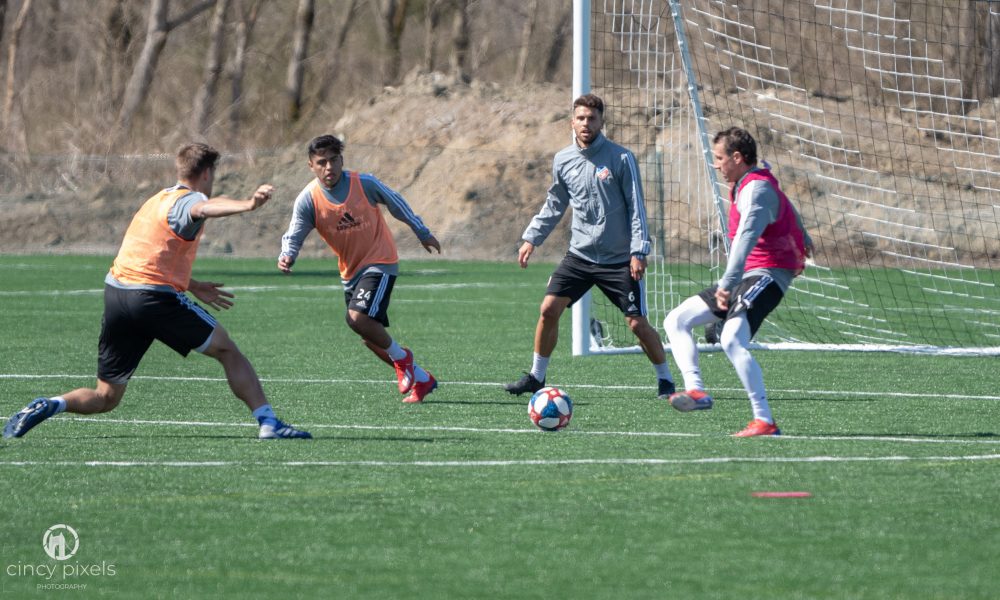 The first month of its first MLS season has been a roller coaster ride for FC Cincinnati. The latest news was the OVI citation given to Fanendo Adi over the weekend. The club will try to bounce back from Saturday’s loss when it plays Sporting Kansas City on Sunday.

MILFORD – FC Cincinnati anticipated an emotional roller coaster of climbs, spills and curves in its inaugural MLS season, but the Orange and Blue already have had a wild ride during the first month.

From the punch in the mouth at Seattle to the encouraging three-match run through Atlanta, Portland, and New England to last Saturday’s soggy slip-up against Philadelphia, it already has been quite a ride for Alan Koch’s club. Now, add Fanendo Adi’s citation for driving under the influence and possible suspension to the mix and you have the makings of a solid Netflix binge-watch.

“We knew we were going to have some tough moments during the course of this season, and we’ve had some already,” Koch said following Tuesday’s training session, hours before the Adi news was released. “We talked about it being a rollercoaster and it’s going to continue to be a rollercoaster over the next few months.”

Things don’t get any easier with an impressive Sporting Kansas City club hitting the turf at Nippert Stadium on Sunday. Coming off a 7-1 whitewashing of the Montreal Impact last Saturday in which Krisztian Nemeth recorded a hat trick and Johnny Russell found the net twice, KC has FCC’s full attention.

It was just the sixth time in MLS history that a club scored seven or more goals in one match. FCC has a few days to solve the defensive lapses that plagued them in the rain last weekend to avoid a similar onslaught on Sunday.

“They are one of the elite teams this year,” Koch said of KC. “They are a top, top team. We are under no illusions. Sunday is going to be a very big challenge.”

The good news for FCC is that aside from Adi, who already was out with an ankle injury and could be out longer pending his assessment in the league’s Substance Abuse and Behavioral Health Program, the team is healthy heading into this weekend.

Kendall Waston, who was kept out of last Saturday’s wind and rain with a calf injury suffered during international duty, was full-go at training on Tuesday. While Spencer Richey has performed admirably in recent weeks, Polish international Przemyslaw Tyton could be cleared to play this week making for an interesting selection decision for Koch. Tyton, who has been alternating rest and training in recent weeks, could be included in the 18 or even the starting XI on Sunday.

Kenny Saief, who was a curious omission from the starting squad last week, should be back in the fold against KC.

“We have to manage the health and match fitness of our players,” Koch explained on Tuesday. “Kenny came from a place where he wasn’t playing week in and week out. We have no illusions about what Kenny can give us. We’ve seen it in the very short time that he’s been here. But we have to manage our players. He understands it. Not to say he’s not frustrated. Kenny knows we see the big picture. The goal for him is to play 90 minutes.”

Driving rain and wind limited FCC on the counterattack in Saturday’s match before defensive breakdowns in the second half led to a 2-0 loss in which the Union kept 56 percent of the possession and produced 16 shots to FCC’s five. With a formidable slate of matches upcoming, the Orange and Blue really could have used a result against Philly.

“When we’re at home, you want to get three points,” said defender Nick Hagglund. “Losing three points to a Philadelphia team that is trying to figure things out, it was disappointing. But at the same time, as good as we felt against Portland and a road win at New England, we didn’t get too high from that and we don’t want to get too low from last weekend. Everybody has looked at the video and looked at the things that we can do better to put that behind us and move forward.”

FCC might be catching KC at the right time, with Sporting set to face CF Monterrey in the Concacaf Champions League semifinal on Thursday. KC is the last remaining MLS club in this tournament, and manager Peter Vermes will have to decide how to balance his squad for two matches in four days.

“They always have a veteran squad that knows the system they play,” said Hagglund. “Right now, they are playing cohesive soccer. We’ll get another look at them on Thursday when they play in Concacaf. They like to keep the ball. They’re going to press you. They do all the little things right. Hopefully, they’ll be a little bit tired and have a little rotation in the squad come this weekend.”

FCC rebounded from the 4-1 loss at Seattle with an impressive 1-1 draw against the defending champions in Atlanta. While he heaped praise on Sporting KC at training on Tuesday, Koch stressed that his players are focused on themselves and what they need to do better to get a result on Sunday.