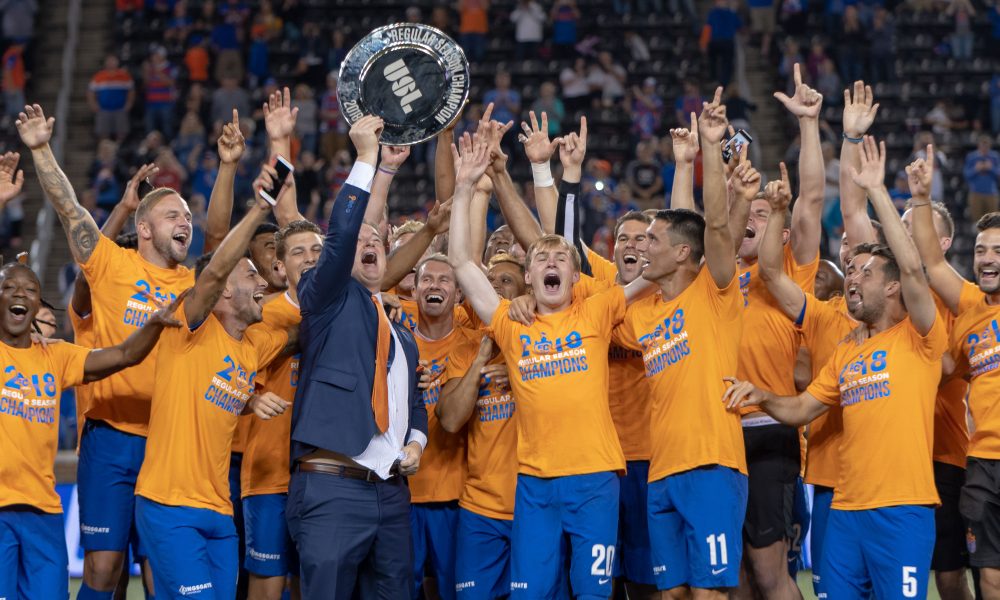 Even though FC Cincinnati isn’t in the USL anymore, that doesn’t mean you should stop watching the USL Championship. Quite the opposite in fact. There are now even more reasons to tune into the lower division of soccer in the U.S.

FC Cincinnati is in its first season in MLS after moving from the USL, now the USL Championship. Even though the team has moved up, that doesn’t mean you should stop watching the lower division. There are plenty of good reasons why fans should continue watching the Championship, even though FCC is not there.

Get to watch the FCC loanees

Not only does FC Cincinnati have players on its MLS team, but they have players in the USL Championship as well. This is because the team has loaned some of their players out to other teams for multiple reasons. Almost all of the players the club took in the SuperDraft were loaned out. Only Jimmy Hague and Frankie Amaya weren’t loaned. Watching these players allows fans to understand the development of the young players and become accustomed to what they will do.

There were five FCC players on the roster who ended up getting loaned, and four of them were to USL Championship teams.

Emery Welshman is the only player not in the Championship. He was loaned to Canadian Premier League side Forge FC.

Defender Logan Gdula, the 13th pick in the MLS SuperDraft from Wake Forest, was loaned out to Phoenix Rising.

Midfielder Tommy McCabe, the 29th pick, was loaned to North Carolina FC. McCabe has made three appearances this season for NCFC and has scored twice, including a game-tying goal at the end of the match against Charleston. This goal was outstanding and shows he could be a player we might be seeing in a couple of years.

Forget the coffee this morning. Just watch this screamer from @tmccabe98. pic.twitter.com/m82S77JRCz

Forward Rashawn Dally, FCC’s final pick in the draft at the 49th spot, was loaned to Memphis 901 FC. Dally has appeared in four matches for Memphis and scored one goal against Bethlehem Steel.

Overall, FCC has plenty of players not necessarily on the team that fans should keep an eye on, and the USL Championship is where you’ll see them.

Watch players and styles FCC could end up playing

Not only would you get the chance to watch FCC players, but also players FCC could end up playing. Just last match against the Union, one of the most featured players for them was Brendan Aaronson. Aaronson featured heavily for Bethlehem Steel when FCC was playing in the USL, and now look at him. He is a major fixture for the Union and has already scored this season when one Brad Guzan seemed to turn off.

Along the same lines, FCC could end up playing USL teams in the U.S. Open Cup. Because of that, getting a good look at these teams allows us to understand how they play against regular competition and what their strengths and weaknesses might be. As we saw when FCC played in the Open Cup in 2017, sometimes they play differently from when they usually would in the regular season. Watching these teams allows us to learn how they might change their style. Do they have a player they always try to get the ball to or do they like to pass the ball around? You’ll only figure that out by watching the other team play.

If you have ESPN+ you get the USL Championship for free

One of the ways people can watch FC Cincinnati is by having an ESPN+ account. In addition to being the home of many MLS matches, it is also the home of the USL Championship. If you have ESPN+ then you can watch all of those matches as well. You might even find another team to follow and support. There’s plenty of wonderful teams in the Championship.

But, most importantly, it’s still soccer. Even though it might not be as good as the MLS, it is still the sport we love. The players might not be Messi or Ronaldo, but the spirit of the game is still there in spades. Because of that, it is fun to watch the players who might not be as naturally gifted work their hearts out to be the best they can be.