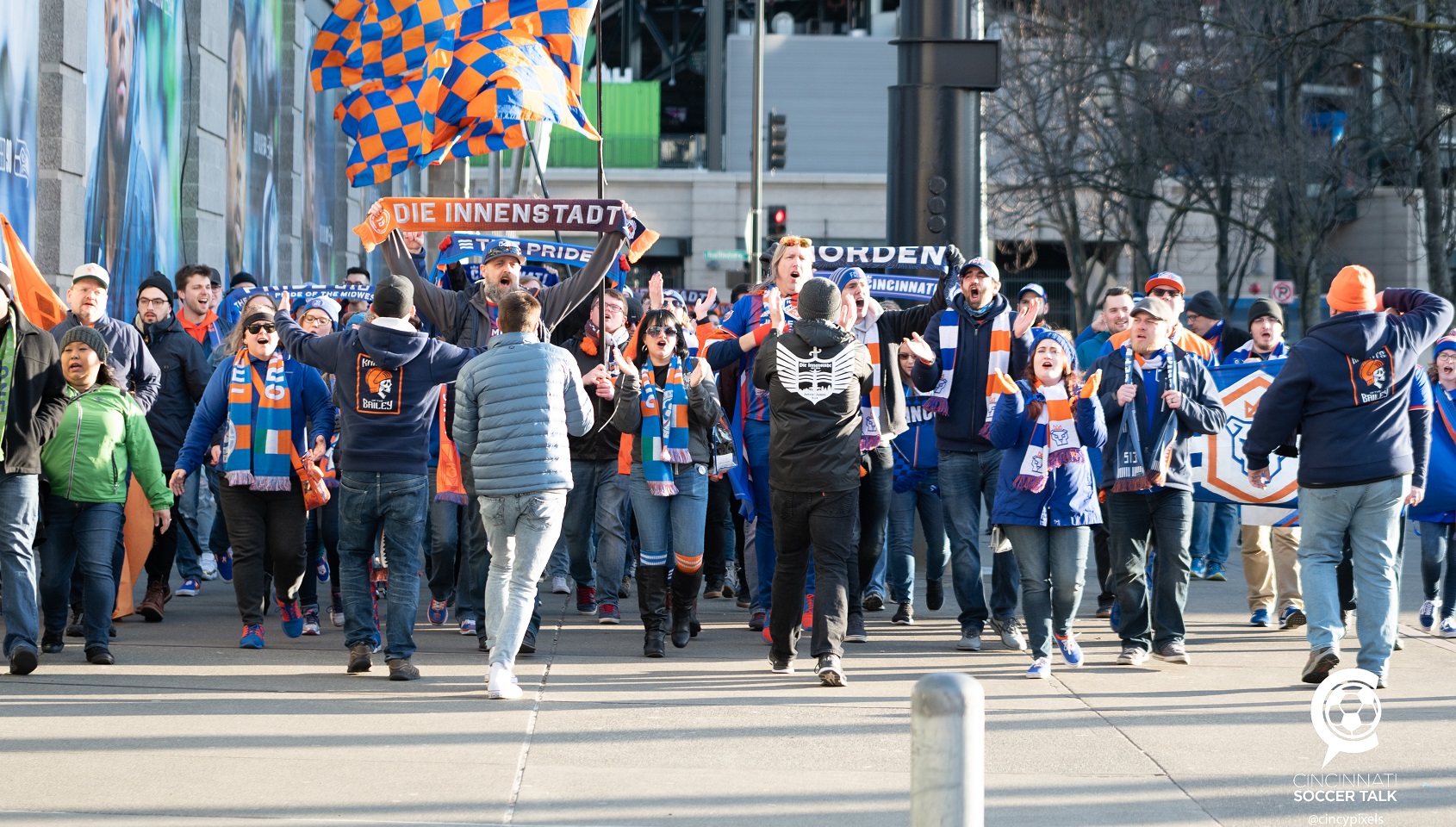 FC Cincinnati joined MLS this season, and it was everything we wished for as soccer fans, but as the expression goes, was this a case of “be careful what you wish for?”

As I was leaving Century Link Stadium Saturday evening with several of the other FC Cincinnati supporters, many of the Seattle fans shouted out “Welcome to MLS.”

How do you take that statement? At its root level, being welcomed is friendly and warm. It’s being recognized and included into a community.

But that statement could also be made sarcastically, and coming off a 4-1 trouncing it would be easy to assume that was its intent. You wanted to be part of this, to join the big show. Well, this is what happens to little fish when they jump in this pond.

The whole exchange got me thinking.

It was over three years ago that FC Cincinnati entered the Cincinnati sports scene. From day one, they made their aspirations to join MLS known. The club and its fans forced themselves into the dialog. At first, not even a market of interest, to getting mentioned, to being a favorite and ultimately earning its place in MLS as the fastest expansion in modern history.

It was everything we wished for as soccer fans, but as the expression goes, was this a case of “be careful what you wish for?”

Gone are the days of bringing drums to away games. Keeping a large group of supporters in sync is interesting when clapping is all you have to sync on.

And getting to interact with the team wasn’t possible. The supporters section was tucked up in corner of the stadium, high enough that it was tough to make out individual players on the field. We already know with the MLS collective bargaining agreement that players will likely be less visible and accessible. Traveling support was always a great way in the past to get more interaction with the team.

Security was at a whole different level as well. Supporters gathered at the stadium two hours before kickoff. Thirty minutes before, the stadium opened to Seattle fans. Metal detectors and wands were used, and a security escort of the group en mass to the supporters section was required. At the end of the night, we were held in our corner for 30 minutes before another group escort from security out of the stadium. In the end, over four and a half hours standing in temperatures only slightly above freezing. All to prevent us from interacting with Seattle supporters and fans inside the stadium.

Even travel has become more challenging. Last year we had four opponents that were very drivable providing six games that were easy trips to make. Now we have Columbus for one game. Chicago isn’t too bad for another, and Atlanta at seven hours becomes a bit much but provides one more game for a total of three. With opponents now on the west coast, flight costs have increased for sure.

And we wanted the best quality soccer right? The beautiful game played by the best available in the U.S. Cincinnati isn’t going to outspend our opponents in the near future. Now the club is being outspent, and talented players are going to punish mistakes, brutally.

With all of this, is it really so bad though?

Let’s roll back to “Welcome to MLS.” How do you take that statement? You look that person in the eyes and read their facial expressions. Guess what? The Seattle fans I interacted with were warm, open and genuine. Despite all of the increased security and escorts and fears and worries, the fans were truly welcoming.

To be fair, after a decisive win people tend to be happy. The opposite result may have brought different attitudes, but let’s not speculate.

We got smiles, hi-fives, hugs and thank yous. With West Coast travel and without drums, we brought hundreds of fans to their stadium and we made noise and helped create excitement. And they appreciated it.

We tried to warn the bar where we gathered for pregame. They simply didn’t hear us or believe us until there were hundreds of orange- and blue-shirted people standing at their doorstep. Ultimately, fans filled the bar to capacity and spilled out onto the patio. They were unprepared and understaffed.

We know the CBA reduces some team interaction, but the front office staff certainly went out of their way to keep a connection with fans. There were staff members like Jack Doyle as a supporter liaison, embedded with the fans. Ticketing staff like Jeff Smith and Greg Harrell both hanging out with fans at pregame and even an appearance from club president and general manager Jeff Berding.

The team also noticed. They clapped us when they entered the pitch for the warm up and we cheered for them. They mentioned what it meant to them in interviews and when the game ended. Despite the incredible distance from the pitch, the players came to our corner of the stadium and acknowledged the fans. And we rained down “We love you, we love you, we love you.”

The match itself was tough and disappointing. No one can deny that, but if we step away from the result, there is no doubt that the soccer on display was better and faster.

And for those of us who made the trip, we were there when Leonardo Bertone put a scorcher of a volley into the net and stunned 40,000 people in Seattle. Our corner of that stadium erupted. In that moment, we all believed our club would win. That nothing was beyond possibility. And though 20 minutes later we were trailing, and ultimately lost the match, nothing can take away that moment and feeling.

So I traveled thousands of miles, spent hundreds of dollars, was up for 22 hours, stood for four and a half hours in the cold and watched my club get stomped on the pitch. Do I regret making the trip?

Not even a little.