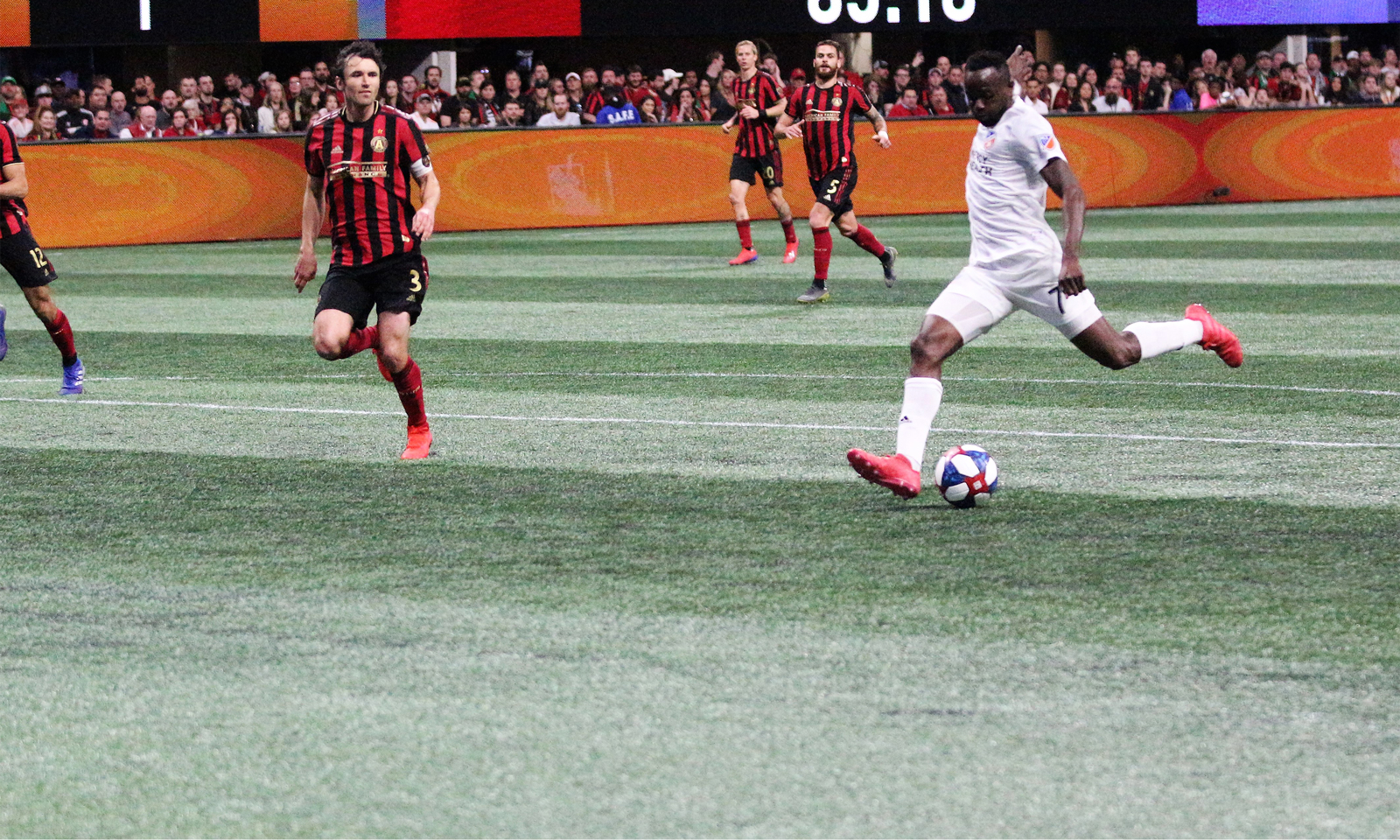 FC Cincinnati dampered Atlanta’s celebration on Sunday with a 1-1 draw against Atlanta United at Mercedes-Benz Stadium. It’s the first MLS point for the Orange and Blue.

ATLANTA — It was a festive atmosphere for Atlanta United on Sunday. FC Cincinnati came away with an accomplishment of its own, putting a damper on the occasion.

On an 86th minute equalizer from Roland Lamah, FC Cincinnati earned its first MLS point with a 1-1 draw over defending MLS Cup champion Atlanta United at Mercedes-Benz Stadium. It was a much-improved showing from the inaugural match last week in Seattle. Both sides are 0-1-1 in the early season.

“During the course of the game, I was thinking we were showing major growth,” FC Cincinnati coach Alan Koch said. “And we might have shown major growth without getting anything from the game. We believe in the group. We know it’s going to take time. But that growth was unfolding right in front of our eyes as the game went on and on and on. Getting the point at the end was huge because it builds confidence. They’ll feel better about themselves and the work they put in.”

In its home opener, Atlanta celebrated its MLS Cup title with the cup itself on display and the unfurling of its championship banner right before kickoff. The Five Stripes fed off that energy early.

In the fifth minute, Julian Gressel went down the right flank and played a through ball to Josef Martinez. Martinez timed his break perfectly, and the reigning MVP banged it home to give Atlanta a 1-0 lead.

But FC Cincinnati responded by doing something few sides could do at Mercedes-Benz last year — it didn’t back down. The Orange and Blue grew into the game as the half progressed.

“I don’t think it fazed us at all,” Koch said of the Martinez goal. “Obviously it’s very, very difficult to go on the road and play in a place like this and concede that early. Some teams will collapse. But give the guys credit, they didn’t collapse at all. They just stayed calm and managed the process of getting through the game. We did what good teams on the road do and go grab a goal right at the end of the game.”

Both Atlanta’s inability to score and FC Cincinnati’s success in preventing another goal helped turn the tide, Koch said. The back line and Spencer Richey, starting for the injured Przemyslaw Tyton, put in an effective performance.

“He never ceases to amaze me,” Koch said of Richey. “He’s a fantastic goalkeeper and he’s not awed by the occasion. Thankfully he didn’t have too much to do, but when he did have to step up to the plate, he stepped up to the plate.”

Tyton could be available for selection next week for the home opener at Nippert Stadium, Koch said.

Allan Cruz and Kekuta Manneh also made their first starts. But it was the substitutions that gave FC Cincinnati a boost.

Greg Garza, who started 37 matches for Atlanta the last two years, entered in the 71st minute to a rousing ovation. Newly acquired Kenny Saief was right behind him. Both made their FC Cincinnati debuts.

“Couldn’t ask for any better,” Garza said of the reception. “This is probably one of my favorite stadiums to play in as a professional. To be able to win a championship here and get that reception being on the opposing team, I’ve never been a part of something like that. It was breathtaking. It was something I’ll always remember.”

Saief, playing in an attacking role, played a brilliant through ball to Lamah in the 86th minute. Lamah slotted it just past Brad Guzan’s left foot for the equalizer.

“We definitely needed some guys to change the game,” Garza said. “That was the talk with all the coaches before we came on. Darren (Mattocks, who came on in the 58th minute), Kenny and myself, we gave a bit of energy to the team. It was good to really step it up a bit. We just got a point — a really valued point — against a championship team. We look towards moving forward. Obviously we can’t get too confident now. Now we have to focus on next weekend at Nippert.

“As the game went on, we started to grow some confidence. To be honest, I think we really could have changed the game if we had a bit more time. It’s tough to see my old teammates going through a pretty tough time right now as a team but at the same time, it’s a really, really valued point we got.”

Next up:
vs. Portland Timbers, 5 p.m. Sunday, Nippert Stadium