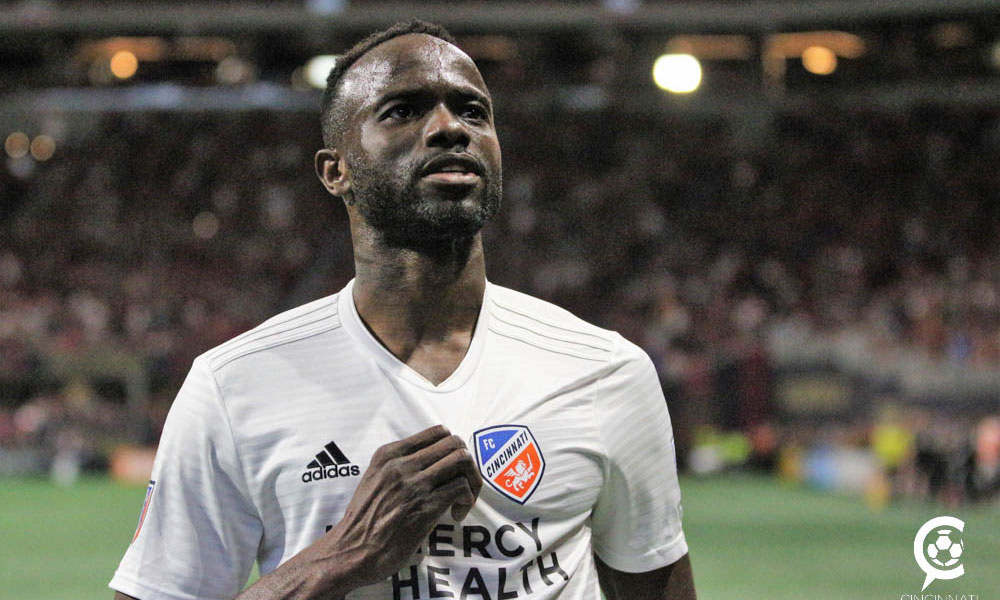 FC Cincinnati took a critical point on the road at the MLS reigning champion Atlanta United. In addition to our Match Report, we will recap each individual player performance for the match.

Richey got the nod over week 1 starter, Tyton (Out-hamstring) and was calm, cool, and collected in his second career MLS appearance. He wasn’t scared to come off his line and grabbed several balls high in the box. The backline was much more organized than last week and outside of Josef Martinez’s moment of brilliance in the fifth minute, there weren’t many opportunities for the home team. His biggest moment of the night was in the 57th minute where he was able to parry Martinez’s point-blank shot to keep the game at 1-0. If he doesn’t make that stop, we aren’t talking about FC Cincinnati’s draw as a season building moment.

Powell had a much better night as he was under control and wisely picked his spots going forward. That was likely helped by the defensive support of Allan Cruz but you could see where he could be dangerous when FC Cincinnati is on the break. This was highlighted by the smart run he made in the 32nd minute. He clearly saw the space vacated by an overextended Atlanta defense and with a little help could have made a dangerous chance for FC Cincinnati. I’d like to see him continue to improve his distribution (64% passing) but like most FC Cincinnati players, this was a nice building block night.

Another solid night for the Cincinnati native. Outside of a shanked 26th minute chance off of a wide-open free kick, Hagglund was solid at the back. My moment of his night came in the 37th minute when Eric Remedi was in on goal but Hagglund was able to knock him off balance keeping the midfielder from getting off a shot. His 7 clearances led the team as his ability to act as a last line of defense was critical on the night.

The Captain had the highest API for a FC Cincinnati player and the third highest on the evening. Outside of being unable to keep up with Josef Martinez’s run for the goal in the 5th minute, Waston barely put a toe out of line. My biggest highlight was the ability to keep a quality line with the back four. After the first goal, Waston helped lock down many chances and stiffled Atlanta on the evening.

Deplagne had a quiet night but it doesn’t mean it was bad. In just his second game as a left back, he kept his side of the field neat and compact. He was decent in distribution (78%) but his 4 clearances were critical to the back line. With the introduction of Greg Garza to the lineup, you could see Deplagne move centrally as mentioned by Taylor Twellman as Coach Alan Koch ideally would like a destroyer (Waston) and a ballplayer at center back.

Ulloa had a quality night in midfield making things difficult for Atlanta. He consistently tracked back clogging up passing lanes and disturbing access to Josef Martinez. When things transitioned back the other way, Ulloa led the team with 88% passing and helped start the break. More importantly, his relationship with Bertone took a large step forward. Both midfielders better understood which player was supposed to go forward while keeping their defensive shape in front of the back four.

While Bertone didn’t have the highlight reel from last week, the Swiss midfielder had another quality night in Orange & Blue. His 4 interceptions and 2 late clearances changed the tide when Atlanta went on the attack. He partnered well with Ulloa and once Saief came into the game his passing help FC Cincinnati spring forward.

The finish, the swagger, the goal that gave FC Cincinnati fans hope in the project. Lamah’s 86th minute equalizer will get all the headlines but his play and relationship with Manneh, Saief, and Garza will be key going forward. In the first half, Lamah & Manneh were the only players with success going forward. If they can add in Saief & Garza to the lineup and incorporate the skills of Fanendo Adi, Lamah and FC Cincinnati will stand to benefit on the stat sheet and in the standings. His finish was clinical and even though it didn’t have the flash of Bertone’s, Lamah’s will send revibirations around the Eastern Conference that FC Cincinnati won’t be a push over.

In his first start for FC Cincinnati, Manneh was a bright spot causing trouble in front of the Atlanta back three. His speed and touch caused trouble for the home side drawing three dangerous set piece chances in the first 25 minutes. His name was said regularly on the broadcast as he ran all over the place making plays on both sides of the ball. The only area I could nitpick would be his lack of connection to Fanendo Adi. I’ll chalk that up to the style of play and his recent addition to the club. A nice 58 minutes for the American as he recovers from an injury that limited him this preseason.

Known as more of a central two-way player, Cruz got the surprise start on the right wing, Right away it was apparent among FC Cincinnati fans that the right side of the field was in quality hands. While not a huge threat going forward, he did enough to force a couple of chances but more importantly provided that essential cover when Alvas Powell wanted to go forward. I don’t want to say he iss the best RW or should stay out there long term for the club but if Coach Koch wants to pack it in and keep defense shape, he could do a lot worse than Cruz in the future.

6 is probably about right in this defensive system for the Designated Player but his inability to stay onside by a couple of inches kept the Orange & Blue from earning 3 points and him a higher mark. Adi put one in back of the net in the 56th minute but was offside by a shoulder. With just 33% of possession, his chances were limited but there was still a lot of promise from the forward. He made several runs off the ball to pull defenders away, especially on the goal, and with the introduction of Saief and Garza, he should see his chances increase.

Mattocks came in for Kekuta Mennah in the 58th minute but played as more of a second striker than the number 10. There was some promise from the forward but largely his end product was ineffective. He was unable to hold his line and like Adi was called offside too many times. What I did like was his work rate in the closing minutes. Mattocks is a “professional” and he understood that with a bunch of tired legs out there, it was his job to track back and provide some extra cover to secure the point. These stats don’t show up in the box score but I’m sure Mattocks was one of the first players to receive congrats from Coach Koch when he came off the field.

Garza made his debut at left back in the 71st minute for Alvas Powell and quite possibly set up a look at the starting XI we’ll see going forward with Deplagne moving over to right back. With Powell on the bench, Garza played the more advanced position getting into the attack. On defense he showed a little rust but has the knowledge and composure to recover. Can he play 90 minutes yet? Probably not. His performance, like Saief give plenty of fans hope for FC Cincinnati’s future.

The newest signing for FC Cincinnati made his first appearance in the 73rd minute and if you need to see why the club signed him, look no further than Lamah’s goal. Saief was able to bring down the ball in the midst of several Atlanta players and with one quick look hit a pitch-perfect pass for the goal. Like Mattocks, his work rate was critical in securing the point. I’m not going to anoint Saief as the savior but his skill and composure will keep FC Cincinnati in more games than not for the season.

You have to give a tip of the cap to Alan Koch for going away from the 3-4-3 in preseason then continuing to build upon the 4-2-3-1 this week. It was clear that the team last week lacked cohesion and it needed to be improved upon in Atlanta. We also made the case on the podcast this week that success looked like a team that took the lessons from Seattle and built upon them. The club clearly did in both instances and gave the rookie MLS manager a result he can get respect from and use as a building block going forward.