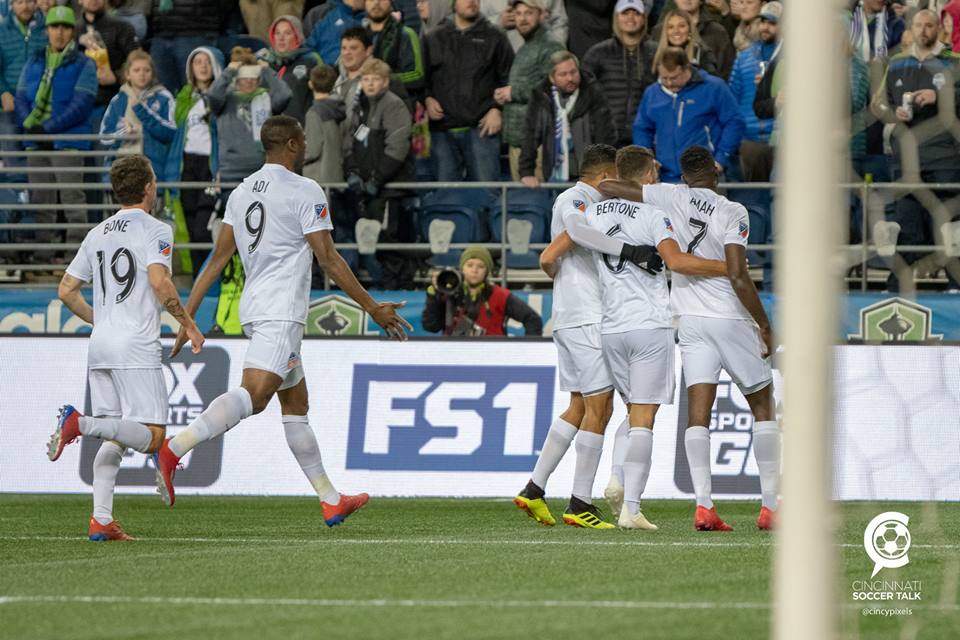 Welcome to our first Player Ratings for the 2019 season. In addition to our Match Report, we will recap each individual player performance for the match.

It’s tough to be too hard on Tytoń though the club conceded four goals on the evening. He was under pressure all night with little help from the defense in front of him. The Sounders peppered the FC Cincinnati keeper with 24 shots, but Titi came up with six saves highlighted by his third-minute deflection off the post from a Nicolas Lodeiro shot. I would like to see better distribution from the back as he was unable to connect his passes to the front line, but that can be accredited to Seattle’s pressure up front.

Alvas Powell caught a lot of flack on the TV broadcast and social media during the match and it was mostly deserved. The right-back who likes to get into the attack got caught up the field time and time again exposing the rest of the back line when Seattle went on the counter-attack. The Sounders focused so much on his side that they took 19 of their 24 shots from his side of the box. He played crucial roles in the first two Seattle goals and was positionally unaware for large periods of the match. Most concerning to me was his part in Seattle’s second goal where he didn’t show any urgency getting back on defense and then got caught ball-watching, allowing Jordan Morris go right by him for the goal. Powell has been around this league long enough and knows he clearly needs to do better if he wants to stay in the starting XI.

The Cincinnati native tried to make the most of a tough situation as he was the last line of defense when Seattle went on the counter-attack. With Powell caught up the field, he was left alone on the right side of defense too frequently, leaving him exposed. But he still came up with eight of FC Cincinnati’s 29 clearances. I’d like for him to tighten up some of his long passing, but I think it will as the team grows in chemistry.

The captain displayed a lot of the same traits of a player we thought we were getting. He was a beast in the air, making four crucial clearances. Like Hagglund, he was consistently under the gun and had to do a lot of last-second defending. Like Hagglund, I’d like to see some improvement is his connection to the midfield. At 55 percent passing, he was unable to relieve pressure when he had the chance.

Deplagne got the surprise start at left-back after playing in the middle of a back three this preseason, and he acquitted himself well in his MLS debut. He was sound at the back and partnered well with Lamah when the time called. His extra effort forced the deflection to Leonardo Bertone on the lone Cincinnati goal. If FC Cincinnati sticks with the back four, I wouldn’t mind seeing him at RB when Greg Garza returns.

Saturday was a rough night for Victor Ulloa. With FC Cincinnati trying to confront Seattle before the center circle in the first half, that left Ulloa with a lot of defensive responsibilities and room to cover. Unfortunately, when he and Bertone both went forward, they exposed the back line to the counter-attack. Bertone’s goal gave him the higher grade, but Ulloa also lost points due to his inability to possess the ball in the middle of the field. Fifty percent passing in that part of the pitch is unacceptable and was a big reason the club couldn’t get the ball up to Fanendo Adi. This needs to improve in Atlanta, or it could be another long night for the Orange & Blue.

Leonardo Bertone’s name will be etched in history after his cracker of a shot for the first goal in MLS history for FC Cincinnati. In addition to that beaut, he nearly scored a second off a free kick that forced a diving save from Stefan Frei. He led the club in shots (three) and shots on goal (two) and was one of the few players who could possess the ball and get the team going forward. I’d still like to see better chemistry and positional awareness develop in his partnership with Victor Ulloa. Too often Seattle could play the ball over or through the defensive midfield tandem exposing the back line. On a rough night for the club, Bertone’s star shone brightest and he will give hope to those fans looking to see this club progress during the season.

An epic finish by Leo Bertone that will forever be remembered in #FCCincy history. #IgniteUnite pic.twitter.com/63jlVESFwR

A player who had a quiet but solid match, Roland Lamah was second in passing percentage (90 percent) and had two key passes while trying to partner with Adi in Seattle’s half. There have been concerns about his effort to help out on the defensive side of the ball, but Seattle had more success going to the opposite side of the field away from Lamah in the first half. If he can at least provide decent defensive coverage, the left side of midfield will be his for the season.

Corben Bone picked up the designation as the only player to start both the USL and MLS openers for FC Cincinnati. His appearance tied Jimmy McLaughlin for the most in Orange & Blue history (103). Bone had a quiet night in the No. 10 role. He had a 96 percent passing percentage, but he wasn’t able to bring the offense together to bring Adi into the game. Looking at the API, he didn’t do a lot negatively to affect his score, he just didn’t have much to positively drive his number. Jumping into the No. 10 role with a new team and a new system was a lot to ask for the veteran midfielder, but he was one of the least of my worries on the night.

I feel for Alexander because he was put in a tough situation Saturday night. Known traditionally as a box to box midfielder, coach Alan Koch asked the veteran to play out on the right wing in a formation the club implemented on Monday. Once Seattle saw they could make headway on the right side due to Powell getting caught out of position, Alexander was left in no man’s land once FC Cincinnati turned the ball over. I’m a believer in Alexander more centrally but unfortunately for him, it could take some time for FC Cincinnati fans to get this performance out of their minds.

While the Audi Player Index wasn’t kind to him, Fanendo Adi was a victim of FC Cincinnati’s inability to possess the ball. His API score was harmed by a cruel yellow card and three fouls committed. To me these were actual positives, as it showed he was fighting for every inch when he had the chance to get the ball. When he got the opportunity to hold the ball up, he forced a dangerous free kick that Bertone nearly put in the back of the net in the 60th minute. I’m not worried about Adi and when the club gets things sorted out, I’m confident he’ll find the back of the net.

Mattocks came in the 61st minute as a sub for Eric Alexander but was largely ineffective and unable to provide a spark off the bench. With FC Cincinnati consistently under pressure, he was unable to get on the ball in the center of the pitch.

Kekuta Manneh made his first appearance in MLS since 2017 when he came in for Corben Bone in the 73rd minute. For a player who didn’t play much in 2018, you can see his speed that the coaches like but that it will take time to knock off some rust. He was able to get up and down the field but gave up the ball a little too easily. With Alexander’s rough start, you might see Manneh in the starting XI sooner than later if fit.

The native of Holly, Mich., made his MLS debut as an 86th minute sub for Alvas Powell.