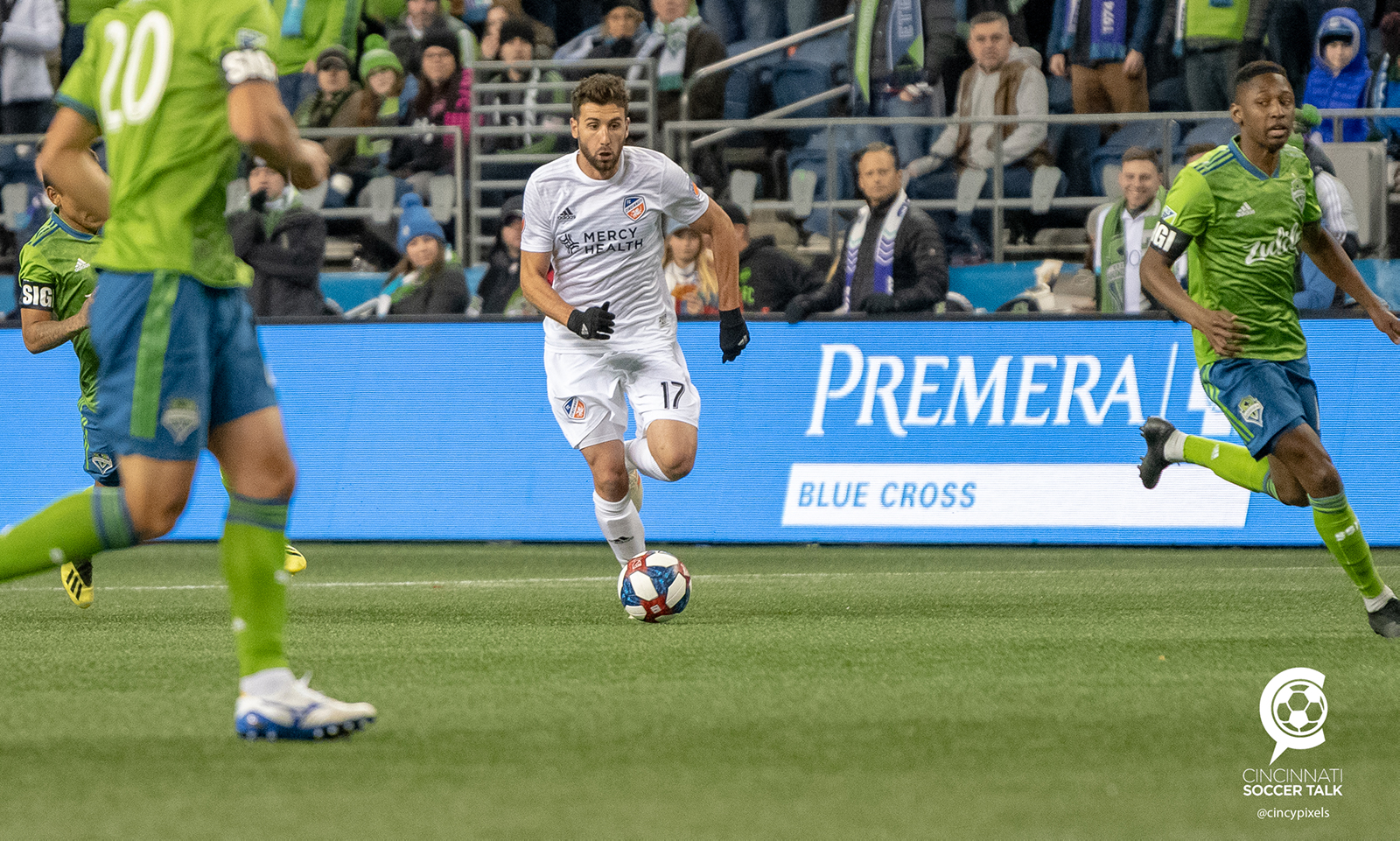 FC Cincinnati took an early lead but fell 4-1 to Seattle in its first MLS match Saturday.

After a bit of a rough-and-tumble preseason of trial and error, FC Cincinnati was ready to face the Seattle Sounders in its MLS debut Saturday. FCC rolled out a 4-2-3-1 lineup against the Western Conference club and fell 4-1 at CenturyLink Field in Seattle.

The energy was palpable through the screen, with thousands of FCC supporters holding their breath and waiting for kickoff. Captain Kendall Waston loudly hyped up the club before the match started. The club and city knew everything that was on the line. While FCC felt the pressure of its first MLS match, Seattle went into its first match of the season having lost its last four season openers and having something to prove.

FCC started the match with possession and a tough defense. Seattle had a shot at a goal in the seventh minute but goalkeeper Przemysław Tytoń blocked the goal. Not even five minutes later, FCC midfielder Victor Ulloa almost had an own goal, but it went over the net.

One minute later, FC Cincinnati scored its first goal in MLS history off of the right foot of Leonardo Bertone. FCC took the lead only 14 minutes into the match, giving the traveling supporters and everyone at home something to cheer about. The momentum from the 1-0 lead gave FCC the confidence it needed to start attacking more. FCC took more shots inside the box but couldn’t capitalize on them.

Seattle equalized more than 10 minutes later, in the 27th minute, thanks to Kelvin Leerman. During the goal, FCC defender Mathieu Deplagne was brought down outside the box, nursing a shoulder injury before returning to play.

Seattle capitalized on the momentum from the goal, giving FCC a run for its money. Jordan Morris scored in the 34th minute, giving Seattle the lead for the first time. Seattle controlled the ball, taking advantage of the fact that FCC could not get possession, and attacked down the right side. In the 43rd minute Morris scored for Seattle again, giving it a 3-1 lead before the half.

Seattle was awarded a corner kick in the 58th minute, the ball landing cleanly on top of the net. Two minutes later, FCC was given a free kick, taken by Bertone and blocked by Seattle keeper Stefan Frei, keeping the score at 3-1.

Minutes later, FCC subbed in Darren Mattocks for Eric Alexander, desperate for a change of pace in order to try to gain the upper hand. Seattle appeared to slow down just slightly around the 68th minute, appearing to recover a little bit more slowly after possession was taken away. FCC was responding better to Seattle’s attack but couldn’t capitalize.

FCC’s midfield struggled all match but seemed to become more cohesive around the 70th minute, going toe-to-toe with Seattle for possession. Seattle’s Victor Rodriguez had a long kick from outside of the box that soared over the net. FCC was awarded a free kick in the 80th minute but couldn’t capitalize, a common theme across both clubs in the second half.

Fresh legs subbed in during the final five minutes of the match to give Seattle a slight advantage. Seattle held the majority of possession, leaving FCC to struggle defensively. Raul Rudiaz took advantage, evading FCC’s defense with a dribble and a side step, making the score 4-1. Seattle continued to push FCC defensively, taking more shots on goal, causing Tytoń, Deplagne, and Waston to step up.

The loss was expected but still disappointing. It’s important to remember that there are always adjustments to be made, but those can only be figured out on the pitch. One thing made abundantly clear throughout this match was the massive hole in the midfield. This is is something coach Alan Koch will have to address in practice.

While all of the supporters are hoping for a record to cheer for in the inaugural MLS season, it’s crucial to remember that adjustments will need to be made throughout the entire season. The lineup and formation played Saturday might not be what is used throughout the whole season. The first match is always going to be a little rough and ugly, and Saturday was no exception. While supporters don’t need to blindly trust the process when there is no clear vision, they can still support the club and hope for the best.

Next up:
at Atlanta United, 5 p.m. March 10, Mercedez-Benz Stadium in Atlanta