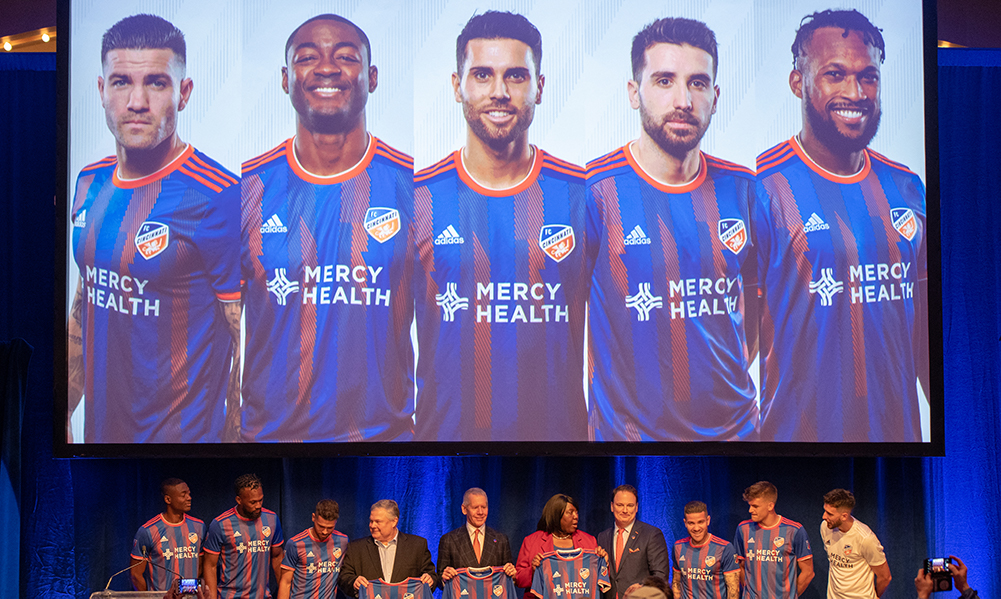 FC Cincinnati finally revealed its primary and secondary kits. The primary is splendid while the secondary kit was disappointing, but that wasn’t surprising.

Yes, the FC Cincinnati kits have finally been fully revealed. No more rumors about what they will look like and prognosticating about the different styles they might contain. With that said, a reveal also brings possible criticism or, even if it is good, excitement. The two FCC kits are the club’s first ever for MLS and were reportedly completed in months, compared to the usual two years.

The first kit I’ll detail is the primary kit, and it’s gorgeous. The first aspect of note is the nice royal blue, which sets it apart from the rest of MLS. FC Cincinnati is one of the only teams to use royal blue as its main color, which I enjoy. Going back to the primary kit, I love the shade of orange it incorporates on the stomach and shoulder stripes. The shoulders are far enough away from the other orange to make it OK to have the same color. It is a deep orange, which is different from others too. Talking about the stomach stripes, due to it not being solid, it doesn’t take too much away from the primary color. I like the uniqueness of the stripes as well, which is a theme about this kit. It’s different from other MLS kits, and I adore that about it.

Another aspect of the kit I like is that under the blue sleeve is another part of the sleeve that is orange, and then under that is another part of the sleeve that is white. I like this and it makes me think of the sleeves on our first USL kits, which I’m a fan of. The only part of the kit that is kind of awkward is that the orange in the FC Cincinnati logo and the orange stripes are different shades. Once I noticed this, it was kind of difficult to get it out of my head. It doesn’t ruin it, however. FC Cincinnati and Adidas put the most work into it, and it shows.

I am not as high on the secondary kit as I am on the primary kit. The secondary kit uses white as its primary color, which isn’t necessarily a problem. I do like the textured aspect of the kit, and it makes sure the white doesn’t stand out as much as it normally would. Also, the Mercy Health logo and Adidas logo are black instead of blue. And that’s it. There is no more color on the kit. There isn’t anything on the shoulder stripes, the collar or the sleeves except the MLS logo, and that is kind of disappointing.

Surprise! Check out our white secondary jersey for 2019! #IgniteUnite pic.twitter.com/yo7Rv5UWDP

However, I do like how the white makes the MLS and the FC Cincinnati logos stand out more. That is one aspect of the kit I am a big fan of. The color of the name number hasn’t been revealed yet, but because of the color of the logos, the name and number will probably be the same. If that happens, I’ll be OK with how the secondary kits look. They did not have the same amount of work hours as the primary, and I hate to say that it seems rushed, but it looks like that a little bit.

The last two kits, which were revealed days prior to Monday, are the goalkeeper kits, which are light blue and a reddish-orange. They have a sort of tie-dye look which I enjoy. The reddish-orange one is particularly beautiful. The light blue isn’t bad, but I love the reddish-orange one. As seen below, the tie-dye part incorporates different shades of the same color, which in the case of the red one, uses different reds and oranges which works well for FC Cincinnati. The light blue doesn’t work as well for this style of kit.

The MLS logo is the same color as the kit which makes it look nice as well. Also on the side of the stomach, there are some stripes, which is alright, but it kind of busies up the kit. It makes the good part of the kit worse, which isn’t great.

do what you love pic.twitter.com/B2e79jlBYQ

However, even though I thought the kit seen above would be one of the regular season kits, it isn’t. FCC will only use it in the preseason.

Overall, none of the kits are terrible, even though there are a couple we haven’t seen yet, which is all I was asking for. I just wanted them all to at least be OK, and I got that. Also, all of the kits will be adorned with a 2019 inaugural season patch. I already ordered a primary kit and will be ordering the secondary when it goes on sale as well. So, take that purchasing plan as my opinion as well.