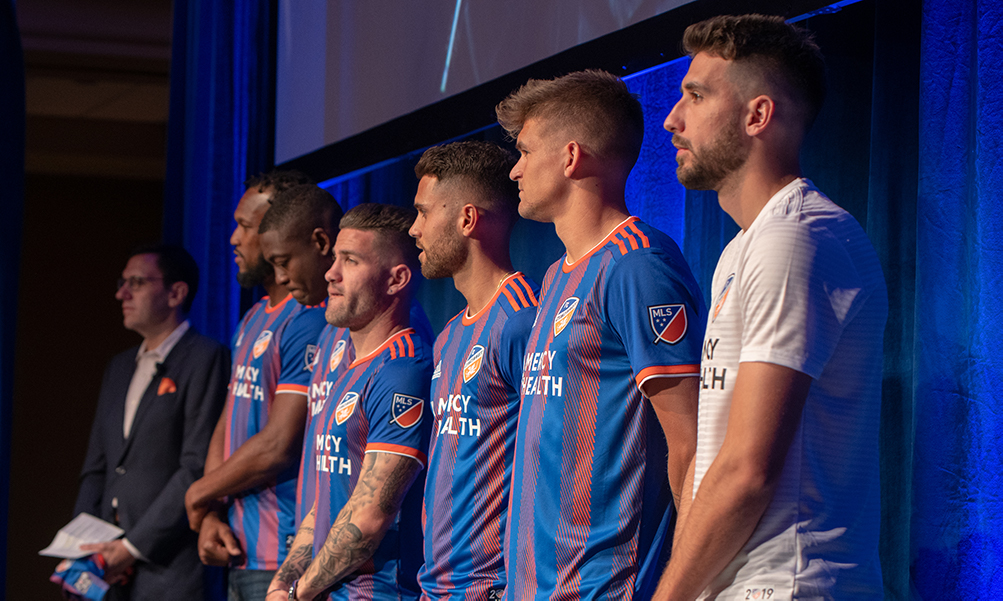 FC Cincinnati revealed its inaugural 2019 MLS kit on Monday night at Music Hall. Tickets were $10 per person with proceeds going to the FCC Foundation.

Those in attendance also received 10 percent off items available for purchase, including the new kit. Once the kits are delivered to the downtown shop, supporters are welcome to add any customization. According to the website, customization will cost $30.

Hundreds of people entered Music Hall in preparation for the unveiling. Most were excited, some were nervous, some were speculating whether or not the leaked images online were accurate or just made up.

With the reminder that the club is only 19 days away from their first MLS match in Seattle, anticipation was mixed with excitement and anxiety.

Kendall Waston, Fanendo Adi, Greg Garza, Leonardo Bertone, Nick Hagglund, and Mathieu Deplagne were the players in attendance. Tommy Gelehrter took the time to ask the new lads a few questions before the kit was unveiled.

When asked about what was the most important thing heading into the 2019 season, Waston replied, “The main thing is to be positive.”

Garza added onto Waston: “I’m looking forward to this. I’m excited to get started.”

Returning to his hometown of Cincinnati, Hagglund said, “It’s a dream come true. I’m so proud to be a part of this club.” He added later, “The passion this city has — it was a small flame that grew quickly.” This quote echoed the sentiments of the other players, piggybacking on why they are excited to start their time in Cincinnati and, hopefully, lead the Orange and Blue to the playoffs.

From the brief interview before the reveal, it’s obvious that the chemistry between the lads is already present and strong. Adi stands out in particular, remarkably more positive than he was during the 2018 season. If the chemistry translates onto the pitch, FCC’s inaugural MLS season will be one to remember.

The crowd erupted into cheers and chants when the kit was finally revealed. The positive reaction was the most notable difference from last season. While it’s difficult to ensure everyone’s happiness, the supporters seem to be on board with the home kit. A bold blue with vertical orange designs throughout and orange piping, the kit has gone over well so far.

“I love the new kit. I can’t wait to buy one. When it leaked online, I was really hoping it was accurate.” – Michael Armstrong

The kit from 2018 wasn’t bad, but some argued that it was too busy. The streamlined design for 2019 had an overall cleaner look, without being too simple.

“I like the design. It looks clean, simple, more professional than the previous design from last year.” – Emmalee Verquer

While the response to the away white kit hasn’t been as strong, there are still many positives. The unveiling wasn’t able to capture the smaller details that were less noticeable. It looks like a simple white shirt, but there are gray horizontal lines throughout that give it a little bit of depth. The away kit is not flashy, but it also isn’t a plain white shirt.

There will be plenty of time to debate the kit later – after all, it is nearly impossible to create something that every supporter will love. However, there is one thing that all supporters are looking forward to – seeing these kits in action on the pitch at the first home match in Nippert on March 17.

Be on the lookout for a breakdown of the new kit on Cincinnati Soccer Talk shortly by our very own Jacob Clary.