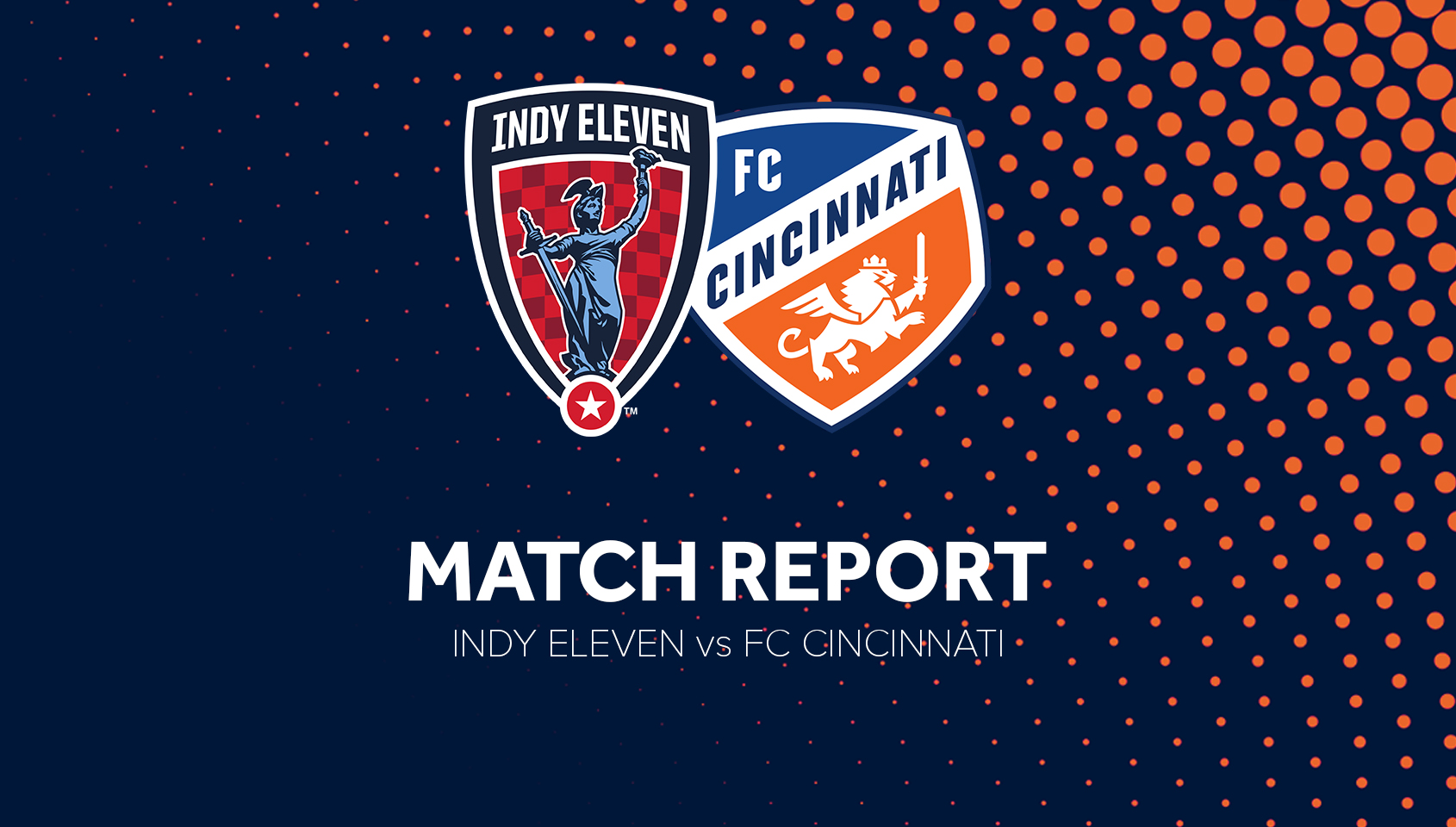 The match started out swimmingly for FCC, holding most of the possession to start. It got some good set pieces going and was able to make its way into the attacking third quite easily. Then in the 11th minute, after a corner was hit into the box and drifted across the goal, Nick Hagglund was at the back post waiting to hit the ball home to give FC Cincinnati a 1-0 lead.

After the goal, FCC still had a lot of chances for a little while, including a couple shots by Fanendo Adi and Emmanuel Ledesma, respectively.

However, Indy Eleven started to gain possession around the 18-minute mark.  It also used that possession wisely, getting back-to-back corners at one point. Walker took both corners. After a stretch of play where both sides were jockeying for possession, Indy got a breakthrough at the 29th minute, when forward Eugene Starikov passed it to an Indy Eleven trialist who put the ball in the back of the net to level the score.

FCC had a mass substitution following the goal, including bringing on Darren Mattocks and Spencer Richey for Adi and goalkeeper Przemyslaw Tyton respectively.

Indy was already on the attack again after the subs came on and put one in the goal in the 34th minute thanks to midfielder Matt Watson.

Right after the Indy Eleven goal, FCC made its way down the pitch, and thanks to a good ball from Corben Bone to Mattocks, the score was level once again at the 35th minute. Mattocks utilized a good bit of skill as well to give himself space to shoot. This was Mattocks’ second goal of the preseason, which gives him the team lead. After the goal, the rest of the first half was a fight to see which team could hold onto the possession, with neither side really taking control.

To start off the second half, No. 1 draft pick Frankie Amaya replaced Ledesma, and Amaya looked comfortable. He was quick and a very adept dribbler.

The second half was a fight to get any attacking chances. Neither team came up with anything to show for their shots. In the 60th minute though, Indy Eleven got a good look and took advantage of it thanks to a shot from forward Dane Kelly. This goal gave Indy Eleven a 3-2 lead going into the latter stage of the match.

After the goal, not much happened for either team. FC Cincinnati didn’t get another chance good enough to help it tie up the score. It is still the preseason, so the team still needs some time to gel. However, there isn’t a lot of time left before the regular season starts, which is concerning if things don’t get better.

Yes, it is still the preseason, but that doesn’t excuse giving up three goals to a USL team. FC Cincinnati’s strength is supposed to be its defense. This club is not currently built to compete in a scoring duel, and trying that won’t help get points. FC Cincinnati needs to know what it is good at and use a formation and squad that best suits that. But that’s what the preseason is all about. Hopefully, the team solves these problems in the preseason.

Mattocks currently leads the team in goals with two, while multiple players have one. Adi is still without a goal, however, and he is FC Cincinnati’s lone designated player. He is still waiting on his first goal in the preseason, and while the preseason doesn’t really matter in terms of the score sheet, for a striker it helps to get one or two in the back of the net to take some of the stress out of not having one. The goals will come, though. But the number of goals will depend on his confidence, and that will come in time.

With its fourth preseason match done, FC Cincinnati will travel to Charleston to take place in the Carolina Challenge Cup. Not only is this good for the team because it means more practice, but the matches will finally be streamed. The fans will get to watch FCC play preseason matches and see how the club performs. This is instead of needing to pay attention to tweets, but that doesn’t mean you should unfollow the Enquirer’s Pat Brennan. Getting to watch the team play will make the preseason fly by. Now we have actual FC Cincinnati soccer to watch, and that’s great.