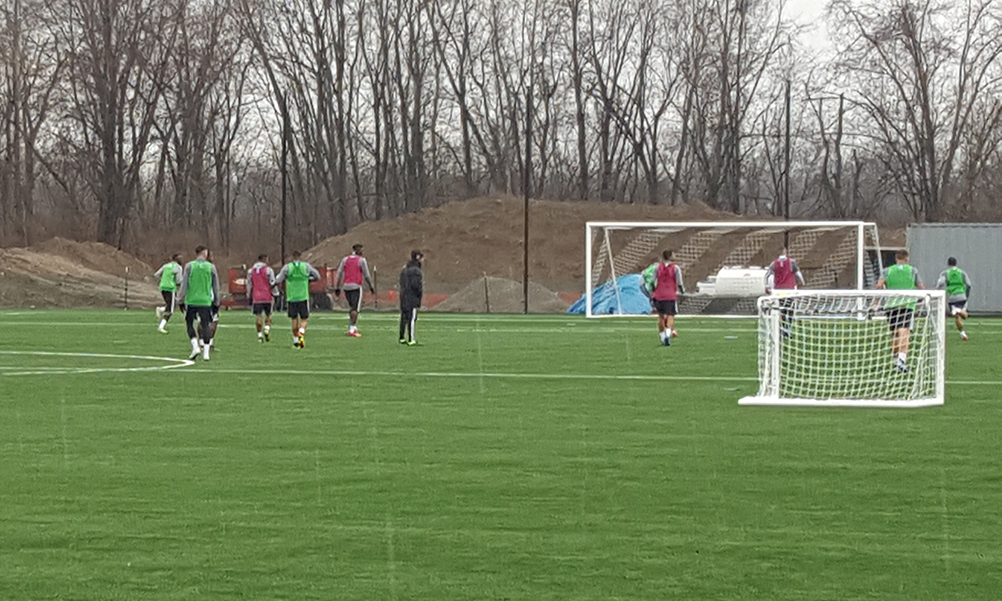 Though it will only be used for a day this week, FC Cincinnati broke in its new training facility in Milford on Monday. It’s not yet complete, but the club had a positive first impression and a new place to call home.

MILFORD — It was cold and wet on Monday afternoon at the Mercy Health Training Center in Milford, but FC Cincinnati coach Alan Koch sensed a positive vibe among his players who were training at the new facility for the first time.

The site remains a work in progress with a few fields yet to sprout grass and a large crane hovering over the steel frame of the administration building, but FCC signage is up at the site, and the back field stood out as a lush green oasis while the club prepared for the next phase of the preseason.

“Nice to come out and train on our own home field, that felt really good,” Koch said. “We are very excited to be here today. It’s nice to have somewhere where we all have our offices. The guys have a changing room. You can see what the club is building for us which is fantastic. It feels like we’re home.”

It was a brief stay. 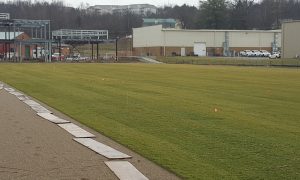 Following two weeks of training at IMG Academy in Bradenton, Fla., FCC was back home for one day before playing Indy Eleven in Westfield, Ind., on Tuesday at 1 p.m. FCC then departs on Thursday for Charleston, S.C., where it plays three matches in the Carolina Challenge Cup. The preseason schedule wraps up on Feb. 23 against Columbus Crew.

FCC left Florida with a win over the Colorado Rapids and draws against DC United and the Montreal Impact, but of course results in preseason mean little. Most importantly, Koch was pleased with the progress and continuity he saw at IMG.

“It’s more the process of putting things together,” Koch said. “The results mean absolutely nothing, but they were positive.”

The process continues on Tuesday in Indiana, where a few FCC players will reunite with former teammates Paddy Barrett, Evan Newton, Kenney Walker, and Tyler Gibson, who now play for Indy Eleven of the USL.

“We make jokes that it’s the new FCC USL team over there,” said goalkeeper Spencer Richey. “They’re all good guys. It’s the unfortunate part of the business where you make relationships and then the next year someone has to move on. It will be fun to see those guys.”

Richey was cleared to play last week after a minor injury and made his debut on Thursday against DC United. He said FCC’s goalkeeper “fraternity” is coming along nicely with he and Polish international Przemyslaw Tyton and SuperDraft pick Jimmy Hague developing a bond on and off the pitch.

“It’s been fun,” Richey said. “The better Titi’s English is getting, the more his sense of humor is coming out. We’re still trying to break Jimmy in. He’s still a little shy which is probably for the best. You don’t want to come in too bold. It’s been a fun few weeks.”

Throughout preseason training, Koch and the players have talked about the importance of building relationships and how critical that is, especially for an expansion side.

Beginning with Tuesday’s match at Indy, Koch said he plans to institute some different partnerships on the pitch to see how players respond to playing together. A focus also will be put on defensive shape as well as keeping the ball and creating more opportunities.

The mud, standing water and construction gear at the Milford site on Monday served as a proper metaphor for where FCC is at this stage of preseason training: Still a work in progress but slowly but surely, everyone is beginning to feel at home.

“We had a sneak peek of it before we went to Florida,” said Richey as he gazed around the Mercy Health Center on Monday. “Some of the structure is up at the facility we’ll move into this summer. But even the temporary place is nice. Even if it’s just for one day before we head out again, it’s nice to be in our own space.”