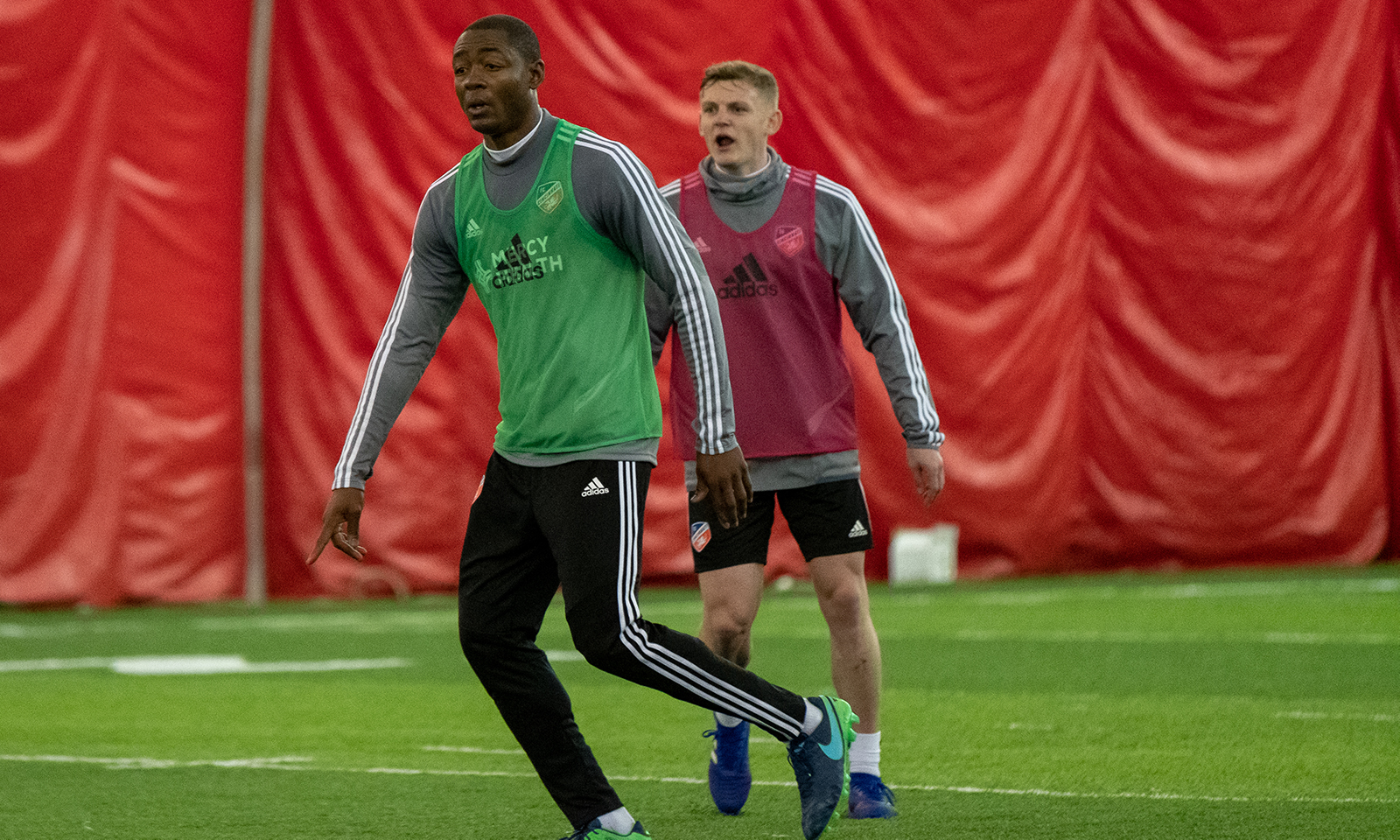 Despite just six weeks before its inaugural MLS regular season begins and a couple of injuries, FC Cincinnati had a spirited first day of training on Tuesday.

FC Cincinnati’s first training session as an MLS franchise was Tuesday morning in the warmth of the bubble at Sheakley Athletics Center on the campus of the University of Cincinnati. The drills appeared familiar, but the speed and precision at which they were executed was noticeably different. This is not the USL anymore. That much was certain.

“Maximizing every single day is going to be crucial to help us prepare for the season,” coach Alan Koch said. “We put a lot of work into the offseason. It’s rewarding to see all these players here under one roof and to get to work with them. MLS doesn’t give you a lot of time. We embrace it.”

Competition was spirited and loose on Tuesday, with no signs that the pressure of having less than six weeks to prepare for the inaugural MLS opener on March 2 at Seattle was taking its toll. But it was clear that they understand the enormity of the task at hand.

“Six weeks is not enough for us to gel,” Fanendo Adi said. “I told the new guys to enjoy themselves. Today is just the first day. Don’t get too tied up with making mistakes because that’s how you learn. You can’t try to be too correct. I (let) the new guys know the league is physical, it’s very athletic. You have to be prepared.”

While optimism reigned supreme on Tuesday, as it should for any club on the first day of training, recent injury news put a slight damper on the proceedings.

Defender Greg Garza, acquired last month from Atlanta United, left training with the U.S. Men’s National Team with a low-grade quadriceps strain, and returning midfielder Jimmy McLaughlin is expected to miss extended time after suffering a serious knee injury this past week while training on his own.

“I pulled him to the side to let him know it’s part of the game and that he just needs to be strong,” said Adi of McLaughlin. “I was very surprised to see him this morning, and he’s smiling. He’s a guy that worked so hard. We all feel sad for him but we will encourage him to keep going and hopefully he’ll come back faster than expected.”

The news for Garza is much more positive. He did not participate in Tuesday’s training but said his injury is minor and he’s listed as day-to-day and for now, just happy to be here.

“The most important thing is building that chemistry off the field, especially for a new expansion team,” Garza said. “It’s fun to be here and getting to know these guys as quickly as possible. Everyone one of us is here for a reason.”

Also participating in Tuesday’s training were all six of FC Cincinnati’s MLS SuperDraft picks. Although only top pick Frankie Amaya is under contract as a Generation Adidas player, he and keepers Jimmy Hague and Ben Lundt, defender Logan Gdula, forward Rashawn Dally and midfielder Tommy McCabe all stood out in their own ways alongside teammates with MLS and international experience.

“We were impressed with all six of them today, to be honest,” said Koch. “It’s difficult for unpolished players to come into a professional environment but you didn’t really see much of a difference. Very positive for all six of those guys.”

Midfielder Roland Lamah, who FCC selected with the third pick in the MLS expansion draft, also participated in training on Tuesday morning. About two hours later, the club announced that after lengthy negotiations it had agreed to a contract with the Ivorian.

FCC will have four training sessions this week at UC before leaving for IMG Academy in Bradenton, Fla., where it will play preseason matches against the Montreal Impact, Colorado Rapids, and DC United in the first of two preseason trips. FCC also will spend 10 days in Charleston, SC when they’ll face the Charleston Battery, Chicago Fire, and Columbus Crew in a round-robin Carolina Challenge Cup before returning to Cincinnati on Feb. 24 to prepare for the season-opener against the Sounders.

“It’s going to be an interesting year, but it’s going to be tough,” Adi said. “You can see the joy on the faces of the players today, especially mine. Everyone is excited to get to know their teammates. We got to speak to everybody, got to know people’s names. Got to know the coaches. It’s very exciting.”

As he wrapped up his comments to reporters, Koch pointed out the players who were still out on the pitch or hanging out with teammates well after training had ended.

“That’s a continuation of the culture we had last year,” he said. “Nobody wanted to leave work at the end of the day. You can see already today, doesn’t look like too many guys want to leave.”