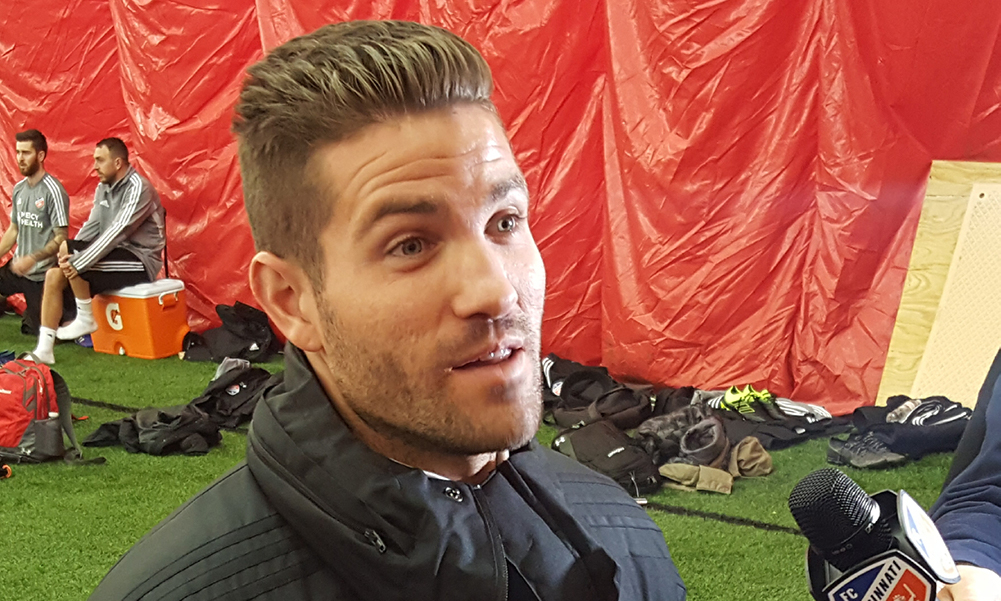 Greg Garza left the U.S. Men’s National Team’s January camp with a leg injury, but it gives him an opportunity to bond with his new FC Cincinnati teammates. Garza hopes some of his ‘expansion magic’ from recent stops can be transferred to Cincinnati

After Greg Garza suffered a low-grade quadriceps strain during training with the U.S. Men’s National Team last week, coach Gregg Berhalter and team doctor George Chiampas decided it would be best for the 27-year-old left back to leave camp and head to Cincinnati, where he could rejoin his family and get a head start on his future with MLS expansion franchise FC Cincinnati.

That meant Garza would miss out on friendlies against Panama and Costa Rica. But while his injury is considered minor, there was no reason to force things and make it worse. For Garza, the silver lining was obvious.

“The most important thing for an expansion team is building chemistry off the field,” Garza said. “Every guy whose name was called to start this new project is here for a reason. It’s two games that are fundamental for the growth of the U.S. national team but not too much of an importance for me right now, especially for my career and starting this new project with Cincinnati.”

So rather than training in red, white, and blue on Tuesday, Garza was wearing blue and orange, standing in the practice bubble at Sheakley Athletics Complex on the campus of the University of Cincinnati watching his FCC teammates train together for the first time as an MLS franchise.

“It feels great to be in a new city,” said Garza, coming off an MLS Cup championship with Atlanta United. “It’s about getting acclimated as quickly as possible. This is a new project for all of us. We know what’s at stake.”

FC Cincinnati acquired Garza in December from Atlanta in exchange for $200,000 in general allocation money and $250,000 in targeted allocation money. He occupies a domestic roster spot on the 2019 roster.

“We are thrilled to add someone with Greg’s soccer pedigree to our backline for next season,” FC Cincinnati coach Alan Koch said following the trade. “He has played at the highest level of soccer in the United States and Mexico and has been a key component of his team at every stop. We look forward to what Greg will bring to our group on and off the pitch next season.”

Garza has a tattoo of a gypsy woman, one of many ink-stained depictions of his travels during a pro soccer career that has taken him to Portugal, Tijuana and Guadalajara in Mexico, Atlanta and now Cincinnati. Garza, a Texas native with Mexican heritage, figures he’s lived more than half his life overseas.

Perhaps Garza will find a permanent home in the Queen City. What he hopes to bring here is something he calls “expansion magic”. Garza joined Club Tijuana in 2011, the year it was promoted to Liga MX. It won the title the following year. Garza joined Atlanta on loan before signing a permanent deal in 2017. Atlanta won MLS the next season.

“Hopefully I can bring that expansion luck to Cincinnati and build something special here,” Garza said.

For now, Garza is day-to-day as he rehabs his quad, hoping to get back on the pitch as soon as possible. The injury is giving he and wife Tauanna time to learn the lay of the land in Cincinnati and shop for homes where they and young sons Francesco and Anthony can settle down.

“I’ve always said once the family feels acclimated to a place everything else always falls into place,” said Garza. “Another blessing of coming in earlier was getting to see my wife and kids and look at some homes and figure out the area. Very welcoming aspect to all of this. It’s been a true blessing.”

Garza is no stranger to moving. That aspect will take care of itself. What sold him on FC Cincinnati wasn’t just the reasonable cost of living. He understands what it takes for an expansion franchise to be successful, and Garza believes in his heart that FC Cincinnati and the club’s leadership is going about this thing the right way.

First and foremost, they didn’t succumb to the temptation to over-spend on goals. What excites the fans isn’t necessarily what wins in MLS. Just ask Atlanta United, which rode its defense to the MLS Cup last season.

“That’s something that sparked a little more interest for me knowing what the back line here is going to look like,” Garza said. “You have to be a very deep team, but the back line is fundamental. It’s obvious what it did for Atlanta.”

Not just Atlanta. Last season’s MLS playoff participants all were among the top defensive clubs in the league. With Garza, Kendall Waston, Alvas Powell, Hassan Ndam and Mathieu Deplagne, Garza believes FC Cincinnati’s strategy to build from the back gives it the best chance to compete for one of seven playoff spots out of the Eastern Conference.

“Usually the best players in this league are the forward players (and) usually the highest paid players are the forward players,” said Garza. “You have Kendall, Alvas as well, who’s done great things at a young age. Mathieu is coming in. For us coming into this year and knowing our responsibility and knowing how important the back line will be, it’s a huge responsibility for all us. We know what it involves and what it takes to achieve great things.”

Garza is ready for a new project. He’s embracing the challenge of another new team, another new city. But, it’s not a new league. The difference now is he’s no longer the new kid on the block. When adversity arises this season — and it will — FCC’s younger players will look to him for answers.

“It’s quite a young team,” Garza said, smiling. “I’m one of the veterans. It’s crazy to say that. Time keeps flying by and you keep getting older.”