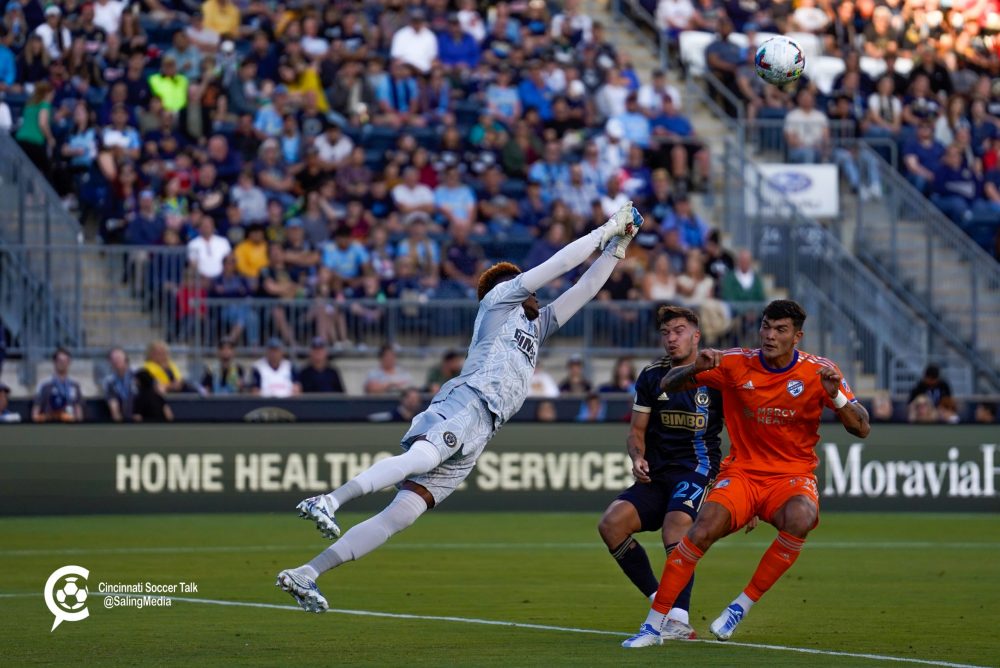 FC Cincinnati made a huge jump in 2022 but the season ended in the final eight of MLS playoffs.

Chester, PA – FC Cincinnati’s 2022 season came to an end on Thursday night following a 1-0 loss to the Philadelphia Union at a raucous Suburu Park. The game won’t be remembered as a playoff classic but it was exactly the kind of hard fought game between two playoff-quality teams that characterizes MLS Cup playoffs. After the game, FCC manager Pat Noonan opened his press conference by saying, “A good playoff game. Good playoff intensity, good playoff atmosphere.”

“We played a really tough team in a tough environment and had some chances that were saved by a very good goalkeeper and I think that was…the difference.” Andre Blake’s shot-stopping display was an unfortunately timed reminder for FCC supporters about his quality in goal. Blake, MLS’ 2022 goalkeeper of the year (his third time winning the award), denied FCC attackers multiple highlight reel saves over the course of the game’s ninety minutes.

Ian Murphy came into the starting eleven for Geoff Cameron and Yuya Kubo dropped out of the matchday roster due to a family issue. Alejandro Bedoya for the Union, replaced by young midfielder Jack McGlynn.

On the other side of the pitch, Philadelphia midfielder Alejandro Bedoya wasn’t healthy enough to return to match fitness. In his place, young midfielder Jack McGlynn got the start on the right side of the Union’s diamond midfield.

The first half was a relatively even contest, though the Union probably had slightly better chances. Noonan said, “The first 45 minutes was a good playoff intensity, you know, hard fouls, there was…confrontations.” He continued, “It was scrappy, it wasn’t perfect. I think each team had a decent look.” Emotions were running high, Nick Hagglund and Matt Miazga both received yellow cards, which would have kept them out of FCC’s next round match if they had advanced.

The second half looked to be more of the same. Both teams had chances but the Union found a breakthrough in the 59th minute. Following a chaotic sequence in FCC’s penalty area, Leon Flach was first to on a bouncing ball near the penalty spot and his half-volley beat Roman Celentano, giving Philadelphia the lead. Blake’s top-tier shot-stopping performance denied the Orange and Blue despite Noonan putting on as many attacking players as he could. When the final whistle blew, Brandon Vazquez, Brenner, Luciano Acosta, Dom Badji, and Sergio Santos were all on the field.

The Union largely held FCC’s attacking trio of Brenner, Brandon Vazquez, and Luciano Acosta quiet. Philly’s pressure limited their time and space on the ball, leading to incomplete passes and poorly controlled touches. After the game, Noonan said of the Union, “They defend very well and so your time and space on the ball is going to be limited so your movements ahead of the ball and how clean you are with your touches, and the movement off the ball, all of it has to be sharp.”

There were some sequences where the Orange and Blue had that sharpness in build-up play but the final ball just wasn’t there. And when it was, Blake was that last line of defense to keep the ball out of the net.

Noonan touched on the season’s accomplishments, saying, “We were a playoff team. We won a playoff game on the road. We just saw a lot of growth from preseason until now. I think you see a strong character of that team in that locker room who are disappointed because they expected more.”

Both Noonan and Nick Hagglund praised traveling supporters and the role they’ve played in the progression of the team. Noonan said, “We’re very fortunate to have the fan base that we do, that has stuck with our group and believed in this team this year. They were there the whole time and it was only better. The relationship that our group in particular has with this fan base is stronger than it was at the beginning of the year and you saw it today with those that are traveling.” He continued, “They have been instrumental in the growth of our group with their backing.”

Hagglund echoed Noonan’s sentiments, “The fans of the city have always been behind this team…and that’s what I’m the most proud of the city for is just like how much they love our team, regardless of what’s happening. I’m just glad we got to give them a season where, you want to give great feelings, great vibes, great energy to our fans and reward them for coming out all the time.”

And so FCC’s season comes to an end, certainly in a different place than supporters have been accustomed to in the club’s first few seasons in MLS. There’s a whole offseason to reflect on the strides the team has made under Chris Albright, Pat Noonan, and the rest of the coaching staff and where they’ll go next.

But for now, even with the disappointing result tonight, it’s worth considering just how much different this season felt. Despite the loss, it feels like the Orange and Blue will be in this spot again. Hopefully next year, it’ll be at TQL Stadium and the 50/50s will go FCC’s way and we’ll be preparing for an Eastern Conference final game. With quickly the club’s fortunes have changed from last year to this year, I wouldn’t bet against it.