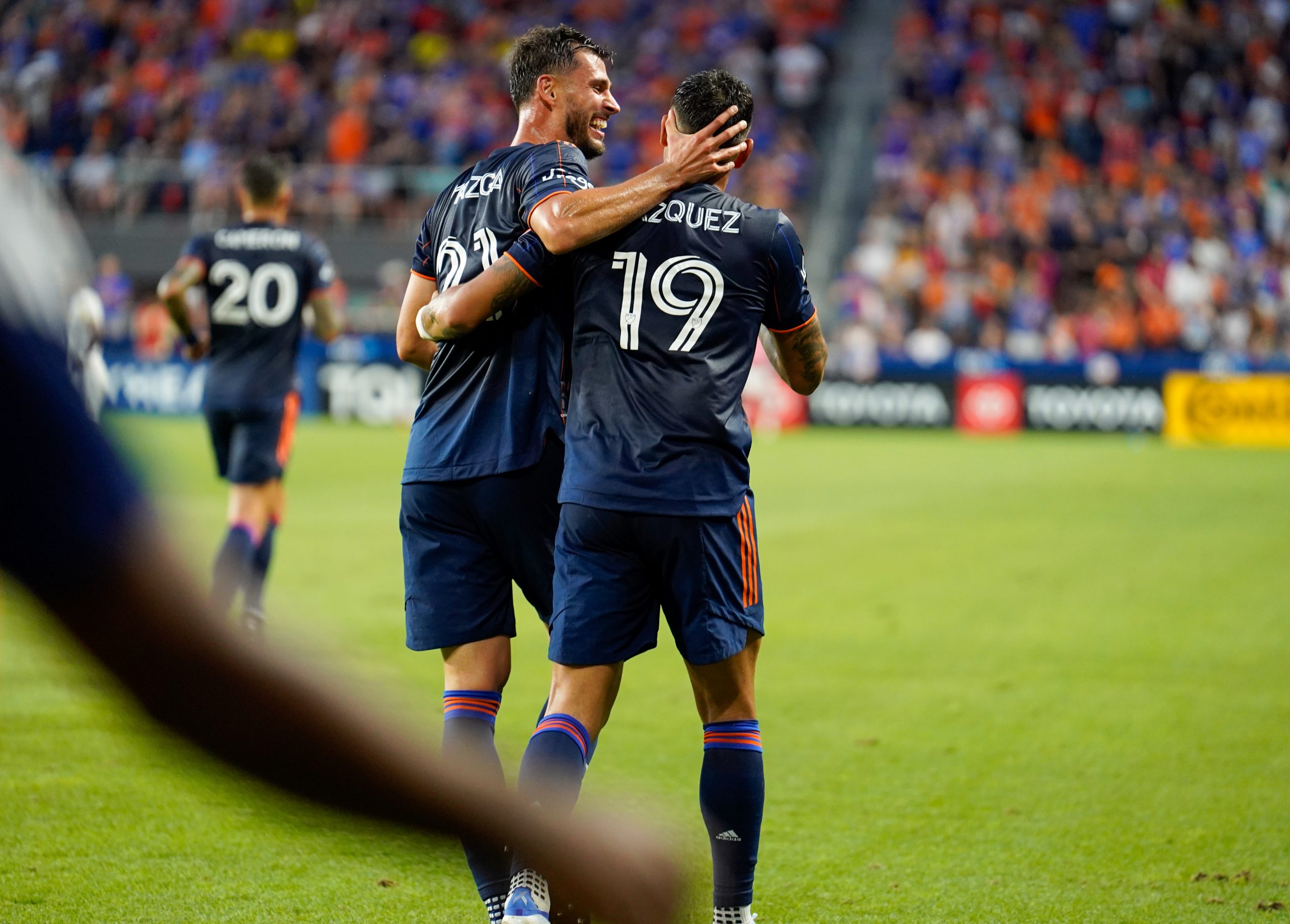 Kubo and others stand out in Hell is Real performance.

Ouch. FC Cincinnati’s 2-2 draw against the Columbus Crew sure feels like a loss, even days later. But there were positives. FCC dominated large stretches of the game, creating far better scoring opportunities over the course of the game. Defensively, the Orange and Blue limited the impact of Lucan Zelerayan and Cucho Hernandez who caused issues in the first meeting of the season. However, FCC is getting to a point in the season where it can’t afford more feel-good (not that this was one) draws. The Orange and Blue will need to put away some games if we’ll be watching the first round of the playoffs.

In the lead-up to Hell is Real, I wondered who might replace Obi Nwobodo, who was ineligible for selection due to yellow card accumulation. Noonan opted to go with Yuya Kubo. Playing alongside Junior Moreno, Kubo stepped up as the Orange and Blue’s role of pressurer-in-chief, applying pressure to Columbus players on the ball 32 times on Saturday, by far the highest total on the team. Defensively, he chipped in too, finishing the match with two won tackles and three interceptions. Look at the second tweet here for an example of Kubo’s defensive work on the night.

Offensively, Kubo’s night was more of a mixed bag. He didn’t influence play as much as we’ve become accustomed to from Obi, finishing the match with just 24 touches in 70 minutes. He received just nine passes on the night, and though FCC seemed happy to concede possession for large stretches of the game, his 19 attempted passes from a central midfielder just doesn’t seem to be enough, especially when he completed just 12 of those. 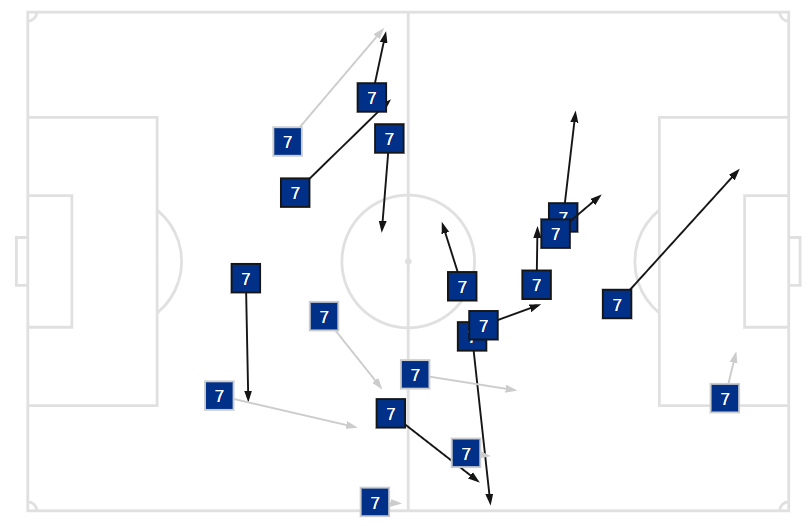 As is clear by his pass map and the boxscore stats, Kubo didn’t look to push the play forward when he had the ball at his feet. Per Football Reference, just six of his attempted passes on the night went more than 15 yards and his completed passes traveled just 49 total yards towards Columbus’ goal. Compare the team pass maps for the last two games.

Kubo operated in the same area as Nwobodo in possession but struggled to connect with forward players, especially Lucho Acosta. Junior Moreno took on more of a role in recycling possession and connecting defense to attack but Kubo’s relative anonymity in the attacking half didn’t help FCC control possession.

Both wingbacks, Alvas Powell and Álvaro Barreal were able to get further forward against Columbus but neither contributed much ball progression, especially moving the ball into the final third of the field. Powell and Barreal combined for three progressive passes and eight progressive carries but just four final third entries. 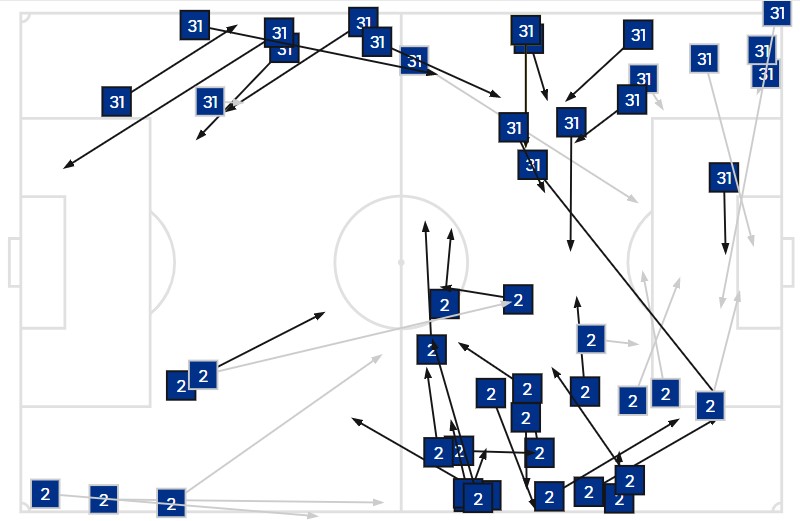 Some of that comes down to Powell and Barreal being on the receiving end of passes into the final third but, even though crossing isn’t a great indicator of successful offense, they combined for three open play crosses in the match. As is clear from their pass map above, Barreal and Powell struggled to find the final ball into the box. Getting the wingbacks involved going forward should ease the burden on other attacking players. The imminent return of Rónald Matarrita will help as well. Even if Matarrita is deployed a late game sub for the next few weeks, his creativity and quality on the ball should help the Orange and Blue in late-game situations.

So the knock-on effects of everything above added to Columbus’ approach to defending meant Lucho Acosta received the ball in less favorable situations than FCC supporters have grown accustomed to this season. Compare where Lucho received passes against Columbus versus with the rest of 2022. He still found space on the left wing but he was forced to receive the ball closer to midfield centrally than usual. There are some touches near “Zone 14” but FCC struggled to get Acosta the ball near the top of the box, a spot on the field where he’s thrived.

Of course, Acosta did Lucho things, including his assist to Brandon Vazquez’s opener on a nutmeg through ball, but by limiting where he can receive passes to closer to his own goal, he’s less dangerous. However, FCC’s offense is at its most dangerous when Acosta is in positions to carve up opposing defenses from threatening positions, and those areas are closer to the penalty area. Getting Obi back for next week’s must-win game against Charlotte should help, given the role going forward he’s grown into of late.

One last thing I noticed this week: overlapping center backs. I don’t have a count of how often either Miazga or Hagglund pushed forward (or has happened in previous matches) but I noticed two instances of it on Saturday.

The play on the left led to Brandon Vazquez’s chance, which he blazed over the bar from close range. Miazga won the ball in midfield and kept running, eventually receiving a pass from Brenner before squaring it to Vazquez. It was less of a true overlapping look because had already stepped into midfield but, the second time I noticed it, it seemed far more deliberate.

The second was a fairly innocuous switch of play to Powell. As he carried the ball forward, Nick Hagglund sprints up the right wing, drawing the attention of a defender and, though he didn’t receive the ball, putting Columbus’ defender in a bind.