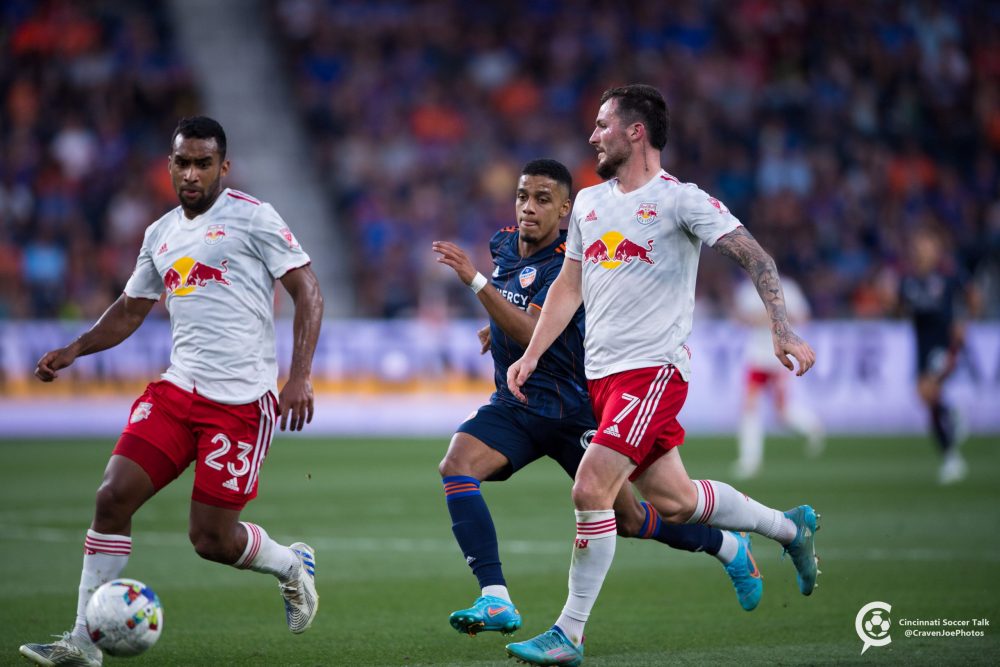 FC Cincinnati drew 1-1 with the New York Red Bulls, though the game was less contentious than the first encounter, despite a penalty awarded after a VAR check. FCC struggled to get a foothold offensively throughout the match but both teams struggled to create much danger. Though the Red Bulls outshot FCC 14 to 3 on the night and racked up 1.8 expected goals to the Orange and Blue’s 0.4, NYRB couldn’t create enough going forward to take all three points.

Why FCC struggles against NYRB

After the match, manager Pat Noonan said, “Overall, with the ball we were subpar. Whether it was decision making on the ball, poor hold up play, we just didn’t get enough out of our attack on the evening to be able to put them under a little bit more pressure on a consistent basis.”

FCC struggled to string passes together throughout the game on Saturday but it wasn’t just a case of just being sloppy or switched off. There’s an element of that but the Red Bulls are the best in the league at causing chaos high up the field through pressure. NYRB presses more often and more frequently higher up the field than any team in MLS.

Saturday was no exception. In terms of raw pressure numbers, NYRB didn’t press FCC as much as some previous opponents have. However, the Red Bulls’ press was effective at recovering the ball after pressures. NYRB regained possession within five seconds after 72 of 153 pressures on Saturday. So nearly 50% of Red Bull pressures led to FCC losing possession of the ball. That mark is by far the highest of the season. Before Saturday, there was only one game when an opponent had a 40% successful pressure rate – a 1-1 home draw against, you might’ve guessed it, the Red Bulls. 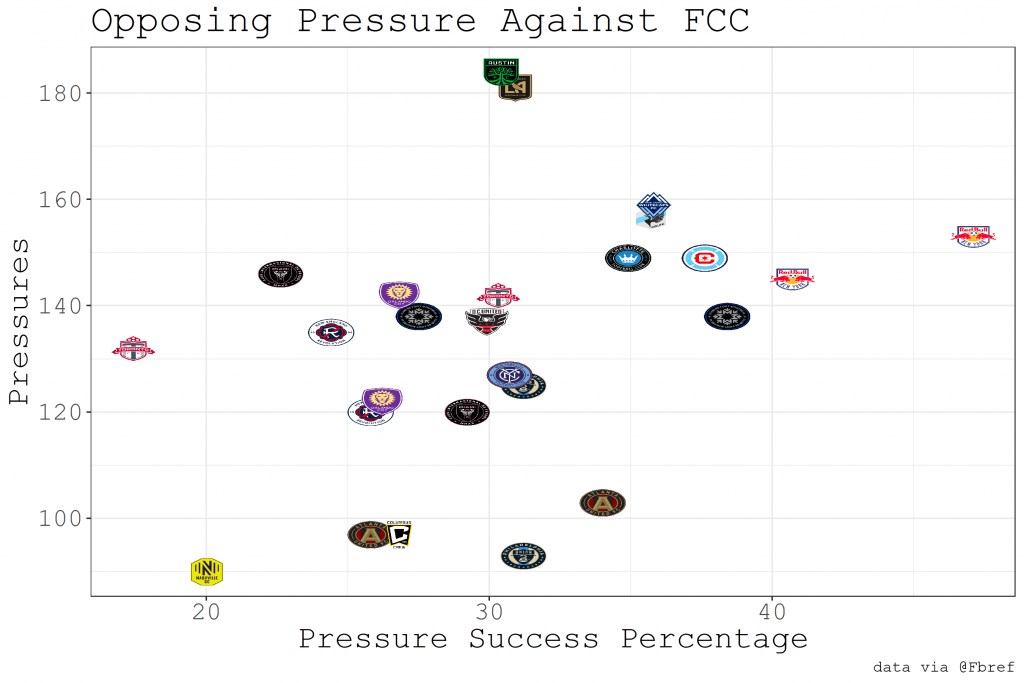 Because the Orange and Blue turned the ball over so much, the offense failed to generate much in the way of scoring opportunities. FCC’s 69% pass completion percentage wasn’t the lowest of the season but it’s in the bottom five. The Orange and Blue’s three completed passes into the opposing penalty area were the third lowest total of the season. Brandon Vazquez and Brenner, usually reliable forward options, combined to receive just eight progressive passes, and just over 45% of the passes targeted to them.

A positive in all of this is no other team is going to be able to press the Orange and Blue like NYRB did on Saturday. If the two teams play again, it’ll be in the playoffs and I’d love to dig deep into how FCC can adjust to be more effective against the Red Bulls.

On the other hand, FCC’s defense continued to limit NYRB to few quality scoring opportunities. Roman Celentano made two nice saves but wasn’t tested all that much despite the Red Bulls’ shot advantage. Even as FCC turned the ball over in less than ideal areas on the field, the Orange and Blue prevented NYRB from capitalizing.

In the post-match, Noonan said, “I thought you’re looking at both sides of the ball, defensively we were pretty strong. I thought Geoff Cameron was outstanding tonight.” Cameron played the full 90 minutes, finishing with eight tackles and interceptions, and 12 clearances. Also importantly, when he stepped to pressure the ball, more often than not FCC won possession back as si of his 11 pressures in the defensive third were logged as successful.

After scoring his first goal in Orange and Blue, Matt Miazga’s quality on the ball and when defending was clear in the hour he played before subbing out. Through just over two hours of game time, Miazga certainly looks like a player who will offer long-term stability on FCC’s backline. The broadcast feed showed Miazga pointing to his hamstring after being subbed off but we can all hope Noonan acted proactively and that Miazga will be fully fit for his first Hell is Real derby. Speaking of, Noonan faces some lineup decisions this weekend.

How does Noonan fill the Obi-sized hole in midfield?

Going into last Saturday’s game in New Jersey, multiple key contributors for the Orange and Blue were just a yellow card away from a one-game suspension due to yellow card accumulation. Obi Nwobodo was the only player on that list who was cautioned against New York leaving Noonan with an Obi-sized hole in midfield for the second iteration of the Hell is Real derby in 2022.

So who will replace Obi? Both Yuya Kubo and Allan Cruz have seen game time in central midfield this season. Obi’s move up the field to operate in a slightly more advanced position in possession might make the fit a little easier for either Kubo or Cruz as both like to influence the game higher up the field. Look at where Obi shows up on FCC’s pass map from Saturday’s match. 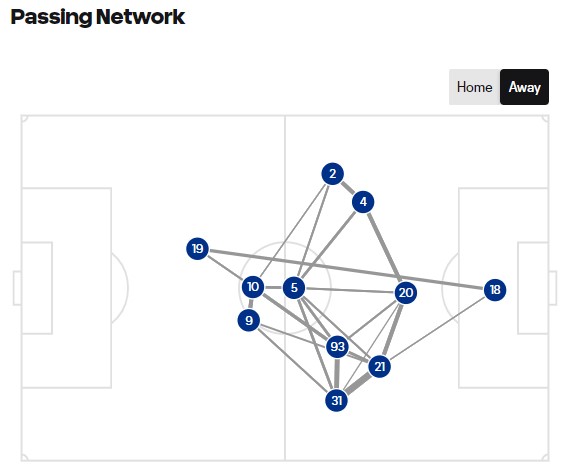 With Junior Moreno sitting deeper in possession, envisioning either Kubo or Cruz sliding in and taking Obi’s spot makes sense. Part of Noonan’s calculus might include how he intends to ask the team to play against Columbus. If Noonan opts to press relentlessly and defend from the front, we might see Cruz. If he lines the Orange and Blue up to defend closer to Celentano’s goal, Kubo might be Noonan’s choice. Offensively, Cruz likes to act play more like a 10, getting on the ball near the top of the box and making late attacking runs. Kubo, as we’ve seen, can be more effective in linking play between defense and attack, especially on the dribble.

If I had to guess right now, I’d lean towards Kubo replacing Obi in the lineup. With that said, I’ll be checking my phone at 6:37 PM on Saturday for when the lineups drop and trying to figure out what it means for FCC’s chances.